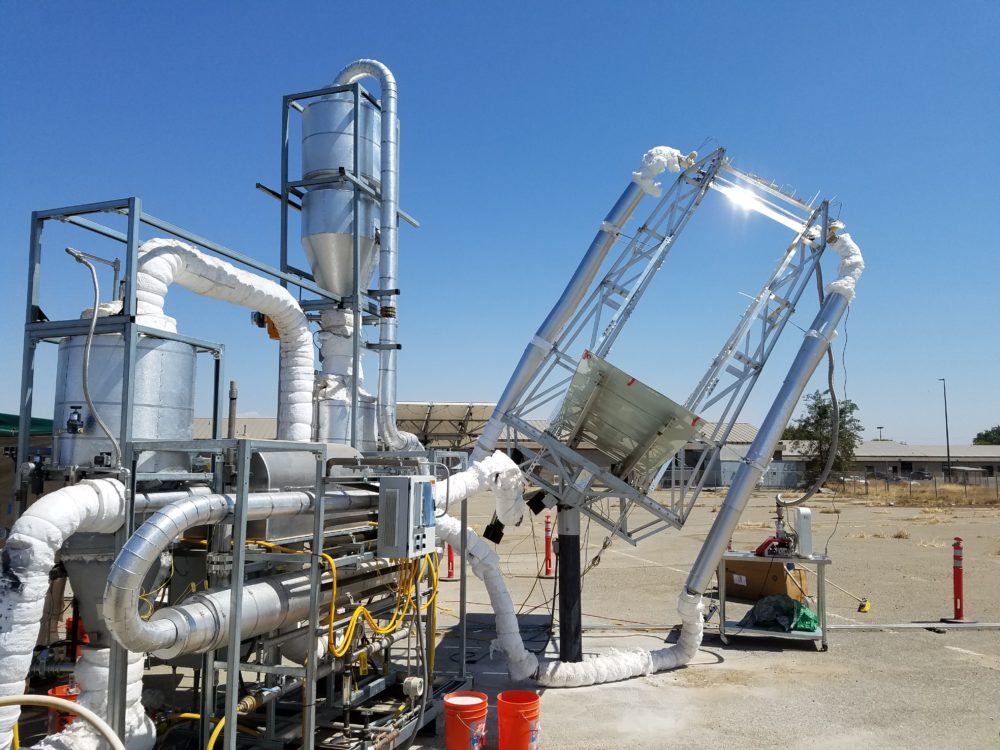 Engineers at the Gas Technology Institute in Illinois are testing a hybrid solar heat-and-electric system.

An engineering team led by an Illinois company has built a solar system that produces electricity and enough heat to potentially power a commercial oven or steam turbine.

David Cygan, a project manager with GTI, a nonprofit research and development company in Des Plaines, Illinois, called the successful testing of the system a critical development.

The system uses compressed air together with micron-sized particles, little bits larger than dust yet smaller than beach sand, to capture and transport heat of up to 650 degrees Celsius. That’s as hot as a typical sparkler burned in celebration on July 4 and nearly hot enough to melt aluminum foil.

“We took the first step,” Cygan said. “We were able to show that we’re able to generate this level of heat coming off a solar collector, which no one has done before.”

Hybrid solar and heat systems are not new, but other systems transport heat through a mineral-based fluid at high pressure and pose a fire-risk if exposed to ambient air. They also supply much lower heat, topping out around 380 degrees Celsius.

GTI’s project is a collaboration with the University of California at Merced and MicroLink Devices, Inc. The team recently successfully tested two 5 kW field prototypes. The Department of Energy funded the development through a nearly $4 million grant from its ARPA-E initiative, which supports research and development into hybrid solar energy systems.

“Who would have thought that … a system would allow you to pick up that level of heat from the solar array — it just hasn’t been done,” Cygan said.

Now what to do with all that heat?

The original vision for the project was for large-scale solar power generation—solar farms with two- or three-mile footprints—but Cygan thinks large-scale commercial and industrial spaces will be a bigger market.

“There are lot of manufacturers and food processors out there that have tremendous roof space and land associated with their facilities, where they would certainly be able to use the heat,” Cygan said.

The technology could be used in industrial food processing, for example. The solar panels could power the facility when the sun is out, and the heat could be used for the ovens or a backup energy source.

There are already hybrid systems that generate electricity with solar panels while also producing heat. Before Cogenra Solar, the California-based startup, was acquired by SunPower, it developed a system that combined photovoltaic electricity and heat production. The heat was used to warm water and cool the solar cells, making them more productive.

Cygan said the GTI system could potentially send heat to an air-cooled turbine or a steam turbine to produce electricity. The organization is developing a heat exchanger that could pull heat from the circulating system and move it into other uses.

But perhaps the most exciting application of the product could be in the microgrid market, Cygan said. Coupled with energy storage, Cygan believes the system will maximize the amount of heat that can be derived from the solar panels.

“Everyone is aware that solar is only available for six to eight hours a day based on what region you’re in,” he said. “Being able to capture higher temperature and store it, you’re going to have much more stored available heat than you would with any other technology that could be used.”