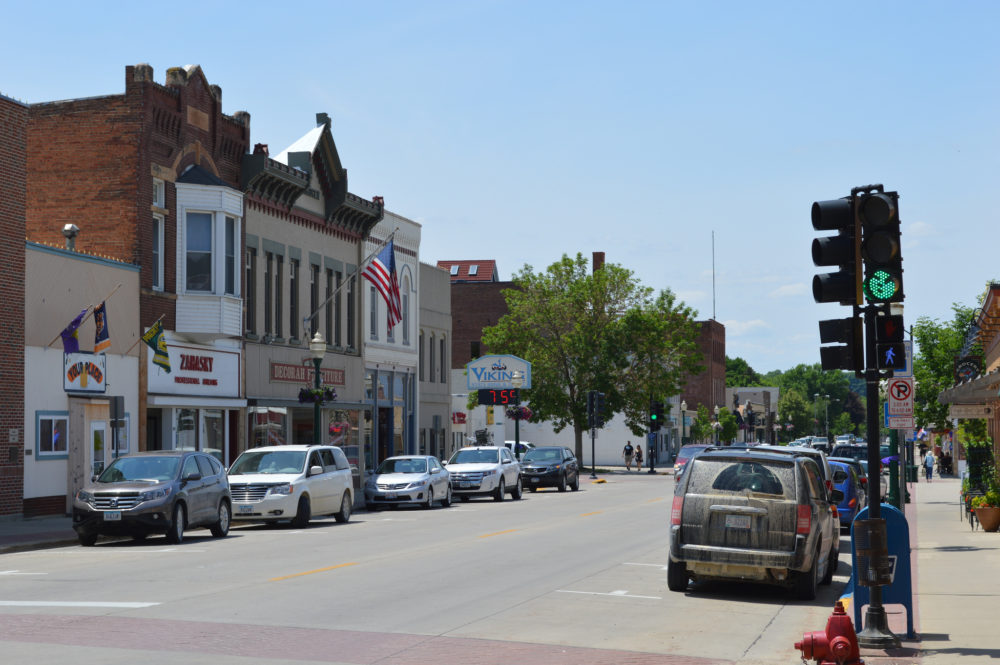 A northeastern Iowa community could lower its electric bills by creating a municipal-owned utility, according to a feasibility study presented to its city council Tuesday.

Supporters of an effort to create a city-owned electric utility in Decorah, Iowa, got a boost this week from a consultant’s report that concludes the move is financially feasible.

“We think the results are very robust,” said Andy Johnson, one of the leaders of the initiative, “and have identified tremendous opportunities.”

Johnson is a board member of Decorah Power, the entity created about a year ago to explore the creation of a public utility in this community of 7,900.

Talk of a municipal utility surfaced after several attempts to develop renewable energy in the city ran into policies of Interstate Power and Light, the investor-owned utility that currently serves Decorah and much of the state.

Five of the Decorah’s largest institutions at one point envisioned building a shared 2.5-megawatt solar array that could provide power to each of the partners. Interstate was cool to the proposal, though, and the Iowa Utilities Board never offered much of a response to it.

One of those institutions, Luther College, has tried several approaches to generating some of its own power from renewables, but it’s consistently run into insurmountable policies from Interstate.

Johnson, the director of the Winneshiek Energy District, said a city-owned utility in Decorah would likely create more opportunities for clean energy and would also have benefits far beyond that including local control, cheaper power, economic development, the retention of utility payments in town, job creation and greater energy efficiency.

Although the feasibility study, conducted by NewGen Strategies & Solutions and two other consultants, signaled that municipalization could work, Johnson said he’s aware of what a long and arduous process it would entail. The City of Boulder (Colo.), for example, last November approved a tax measure that will provide the funds needed to continue exploring the possibility of creating a city utility. That process began seven years ago.

“We’ve seen some happen in three years. And some take 20 years,” said Ursula Schryver, vice-president of education and customer programs for the American Public Power Association. An enthusiastic community tends to hasten the process, she noted, while a resistant incumbent utility tends to slow it down.

Interstate does not favor the Decorah Power plan, and contends that it “should concern the citizens of this community,” company spokesman Mike Wagner wrote in an e-mail. He claims that a city utility would not have local service crews, meaning a potentially delayed response to an emergency such as a tornado.

He also said that Decorah Power has indicated it would take over serving some customers outside the Decorah city limits, meaning that those customers would not have a vote as to who provides their power in the future.

Furthermore, a consultant for Interstate estimated the value of the company’s Decorah distribution assets at $50 million, nearly 10 times the value estimated by Decorah Power’s consultant.

“We don’t think it’s reasonable to ask citizens to take on millions in new debt to pay for a utility system that Decorah residents have already paid for through their utility bills,” Wagner said.

The company plans to ask the city council for an opportunity to present its perspective on the matter.

Every year there are communities that start to explore creating a municipal utility to take the place of a for-profit utility, Schryver said. Although motivations tend to vary, she said that the desire for clean energy has been the main driver recently.

“It’s likely they’ll take over that system in the next year or so,” Schryver said.

Jefferson County in Washington state formed a municipal utility in 2013 to serve about 18,000 customers who formerly purchased electricity from Puget Sound Energy. Three smaller communities — two in Alaska and one in Ohio — also created new municipal utilities in the past few years, according to Schryver.

Although exploration of municipalization doesn’t always result in a city-owned utility, Schryver said it can effect change in other ways. In Minneapolis, for example, efforts to depart from Xcel Energy ceased when the utility agreed to expand its clean-energy portfolio.

In Iowa, the state regulator ultimately would have to give Decorah Power the right to serve as the monopoly electric provider in and around Decorah. Long before that, the people of Decorah and the Decorah City Council would have to embrace the idea. A public vote is required, and it is the next item on the agenda, according to Johnson.

Although he and other promoters of municipalization presented the feasibility study to the Decorah City Council on Tuesday evening, Johnson said it’s too soon to ask that the question be put on a ballot.

“Right now, we want to let the council and the community digest the results. We think it’s a good idea to move towards a referendum, but we are not asking them to do that tonight. People need time to study the results.”

The cost to customers would depend, in part, on how Decorah Power would purchase its power. Buying it all with secure long-term contracts would be the most expensive option, while purchasing it all daily on the wholesale market could be the cheapest and most volatile. Assuming a city utility struck a balance, purchasing 70 percent each day in the marketplace and locking up 30 percent in long-term contracts, the consultant estimated that, averaged over all of the city’s customers, Decorah Power could provide electricity at 4 to 5 cents less per kilowatt hour than Interstate Power and Light.

And customers of the country’s 2,009 municipal utilities also tend to enjoy better reliability, according to the association. They are without power roughly half as many minutes each year as the industry average.

Johnson said that over the past year, Decorah Power has hosted many speakers from municipal utilities and rural electric coops as well as an engineer from the Massachusetts Institute of Technology in an effort to ensure that city residents are educated before they make a decision if, and when, the matter is on the ballot.

He pointed out that even if voters approve the initiative, and even if the Iowa Utilities Board gives its blessing, Interstate still could take the issue to court.