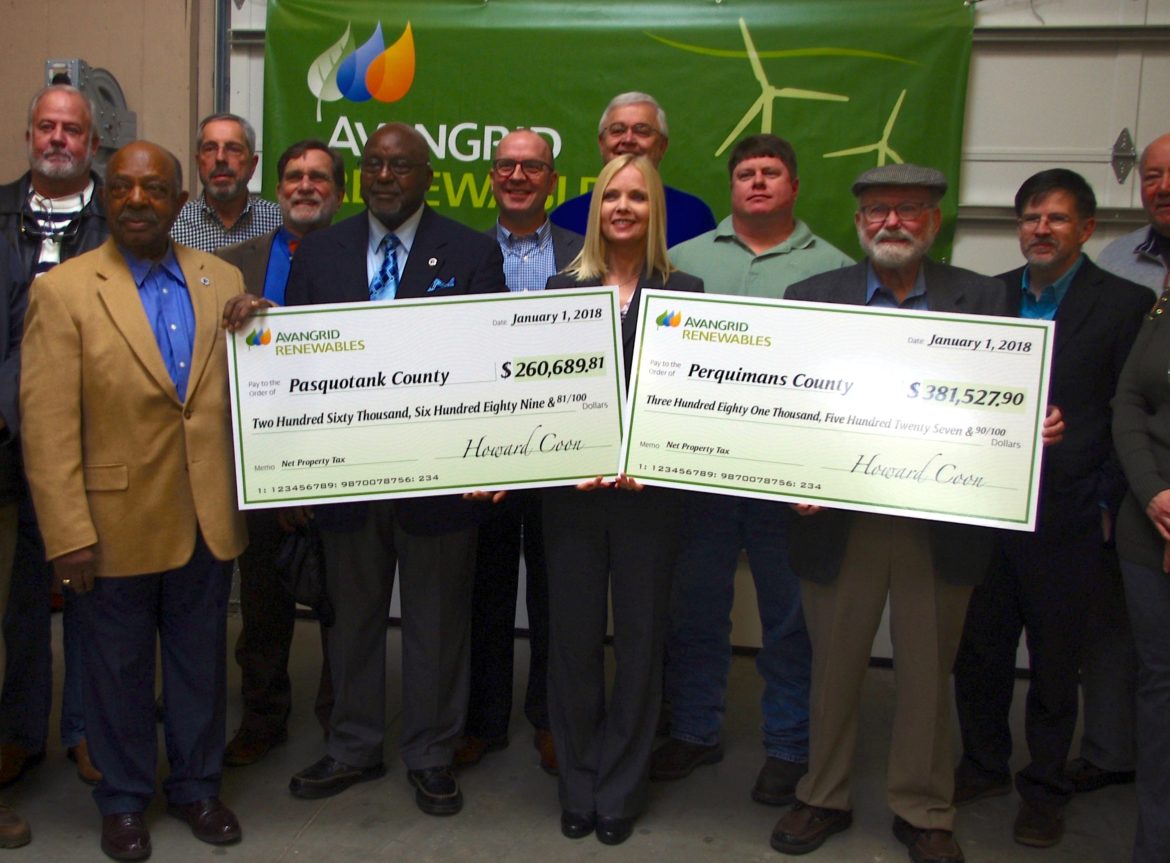 The ceremony — a photo shoot with county commissioners receiving larger-than-life checks — came as the wind industry faces undaunted opposition in pockets of the state, which has banned new wind farms for at least another year.

And though the hoopla is fairly standard practice for its projects around the country, Avangrid acknowledged it carried special importance in North Carolina, where the company has plans to grow.

“What we’re doing here is not unique,” said CEO Laura Beane at the event in Hertford. But, she said, “it has the benefit of highlighting that we do provide economic development in communities that often are suffering and need it the most.”

‘The key word is remind’

With more than 100 turbines stretched across a corner of northeastern North Carolina, the Amazon wind farm produces enough electricity to power 61,000 homes. All of that power is purchased by the online retailer for its cloud data centers.

Avangrid began the development almost nine years ago, before state lawmakers adopted stricter requirements in 2013 and an outright moratorium on wind power last summer. Exempt from these laws, and withstanding a last-minute appeal to the Trump administration to intervene, the 208 megawatt project began full operation last February.

Opponents in the state legislature argue the 500-foot tall wind turbines — at the Amazon wind farm and elsewhere — might interfere with low-level flight training, Navy radar, and other military operations in eastern North Carolina. Avangrid and other wind proponents counter that federal law already prevents wind farms from harming the military. They note that the Department of Defense had signed off on the Amazon project specifically.

The industry’s most hardened opponents aren’t likely to be converted by the recent photo shoot, but clean energy advocates said the event still served an important purpose.

“The key word is ‘remind,’” said Katharine Kollins of the Southeastern Wind Coalition, a nonprofit that works to advance wind energy in the region. “This isn’t going to change the minds of any hardcore skeptics. For people who are on the fence, it reminds them that the wind industry is a good corporate citizen.”

The Amazon wind farm straddles Pasquotank and Perquimans counties, among the state’s most economically distressed, with over 19 percent of the population living in poverty.

Avangrid leases land to build the turbines, which the company owns and operates. Even after generous economic development grants, the company’s property tax payments are substantial — more than $640,000 in the first year between the two counties.

That figure ranks Avangrid the largest local taxpayer in both places — besting utility Dominion Resources, Walmart, and other major institutions.

“The amount of money generated from renewable energy is awfully important to our taxation system,” said Cecil Perry, chair of the Pasquotank County Commissioners. “It helps us to eliminate some of the tax increases that we would have to lay on people that actually can’t afford to pay.”

Because of the structure of the economic development grant, the company will continue to pay about the same amount of taxes over the lifespan of the turbines, even after their taxable value has depreciated. Avangrid officials originally predicted the turbines would last 20 to 25 years but now say engineering and retrofits might stretch their lives to 40 years.

In addition to filling local government coffers, the company touts the creation of 17 high-paying, long-term jobs, along with $624,000 in annual lease payments to landowners.

Those economic upsides, along with its environmental benefits, have most commissioners in Pasquotank sold on the future of wind power.

“There need to be several more wind farms in this area,” said commissioner Bill Sterritt, who attended the Amazon event. “We’ve got room for a couple more in Pasquotank. It will be a wonderful thing.”

‘We’ll see what the future holds’

The rejection was prompted in part by a well-funded group of citizens who were less organized when the Amazon wind farm was proposed. Their objections run the gamut — from noise, to light pollution, to military interference.

Edward Muzzulin, the only county commissioner left on the board who approved the Amazon project, is convinced these wind opponents will continue to prevail.

“There are people who say they’d rather have higher taxes than put in a wind farm,” said Muzzulin, the sole Perquimans county commissioner at the Amazon event. “I don’t know why. I’m for growing the tax base myself.”

But other Perquimans commissioners reached for this article, both of whom voted against some aspect of Timbermill, didn’t rule out all other potential wind projects.

While Jones opposes the federal tax credits that benefit the wind industry – scheduled to expire at the end of next year — he doesn’t share critics’ other complaints about turbines.

“Other than noticing the FAA lights, and them changing the nature of the area after dark, they don’t bother me at all,” he said.

Commissioner Fondella Leigh praised the existing wind farm’s tax contribution, and said each project was a balance of costs and benefits. “We’ll see what the future holds for other projects,” she said.

‘We’re not giving up’

Despite recent controversy in the state legislature, Avangrid still has a long-term plans for North Carolina.

Even if the state’s wind power moratorium is extended, or Perquimans county commissioners continue to resist other projects, the company may be able to add 46 turbines to its Amazon project. The towers already have state and local permits, and are awaiting approval from the U.S. Navy.

At the same time, the company holds a lease to build turbines in the Atlantic Ocean off the coast of Kitty Hawk — an area controlled by the federal government.

“We’re not giving up. We want to be here. We want to expand here,” said Beane, the CEO. “There’s a lot of passion in our team, too. They’ll keep trying and really work to get people into a position where they can see the benefits and genuinely want us here.”