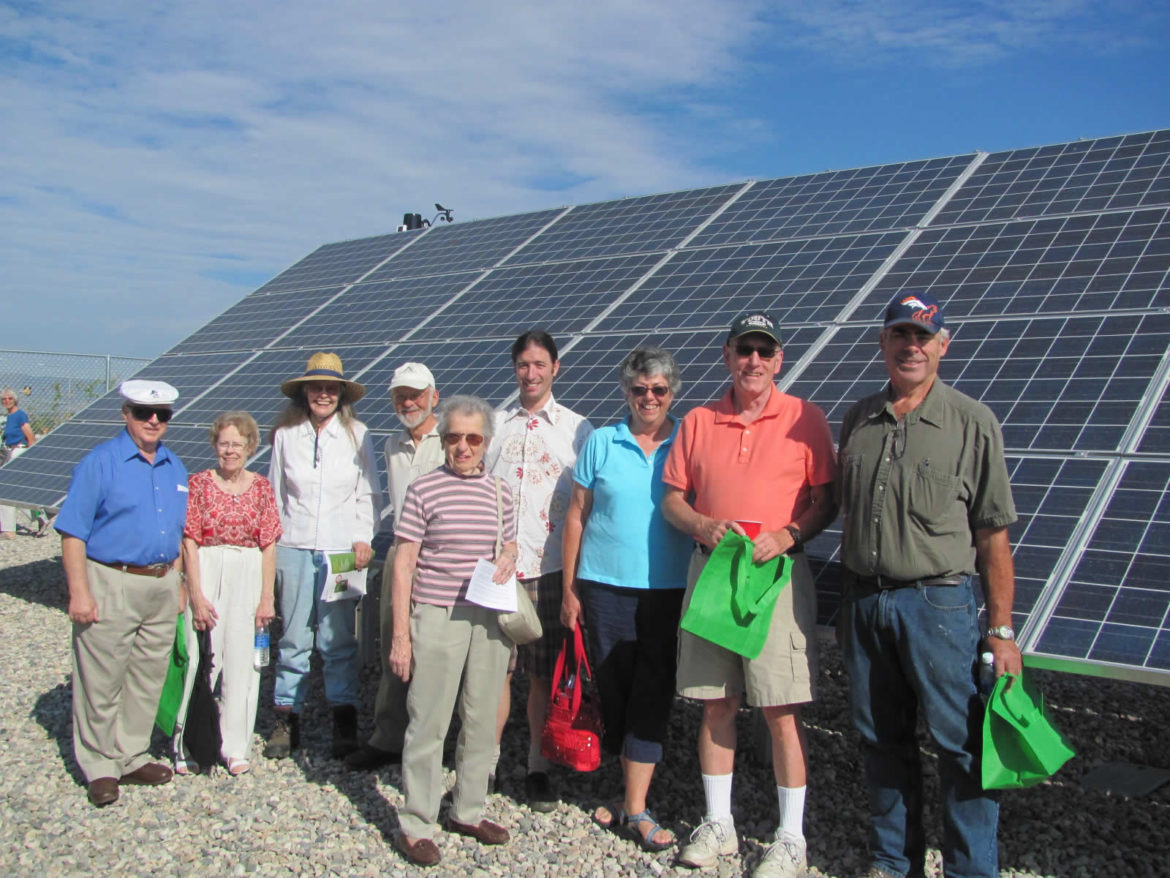 Members of the Poudre Valley Electric Cooperative in Colorado celebrate the launch of their community solar system.

The growth of consumer purchases of solar power via community-based systems is accelerating throughout the Southeast as more utilities develop or roll out offerings.

The adoption rate is picking up, utilities and solar advocates say, because more consumers grasp the benefits of solar energy and more ratepayers who cannot, or don’t want to, buy their own solar systems find out they can participate in a system on a pro-rata basis.

Rural co-ops and municipal systems have moved quicker than investor-owned utilities because many are “more nimble and receptive to customers’ interests and needs,” said Katie Ottenweller, solar program leader at the Southern Environmental Law Center (SELC). But, she added, investor-owned utilities “are starting to realize the market opportunity here. Utilities that are designing smart, affordable ways for customers to participant in a solar project in their community are seeing an outpouring of demand.”

A typical community solar program offers residential customers 1-kilowatt “blocks” of solar-generated power for a set monthly price. The prices exceed the costs to enable utilities to at least cover their costs or earn a higher rates-of-return. In each case, the community solar option is paid for on top of the rate residential or commercial rate that users pay.

Ottenweller said the most successful community solar programs follow what she outlined as a model community solar program. Participants receive direct, tangible economic benefits on their utility bills, participations is within reach for a broad group of customers, utilities engage their customers and stakeholders in development and implementation, and programs are flexible to account for portability and transferability.

Georgia: Georgia Power launched a 2 MW community solar program in January and has seen strong interest with hundreds of enrollments of 1 KW blocks, according to spokesman John Kraft. Ratepayers can purchase “blocks of solar-power electricity for $24.99 per month.

Another 1 MW is approved and the utility is moving to identify the best site, and another 5 MW has advanced in the queue at the Georgia Public Service Commission.

Once enrolled, Georgia Power ratepayers see a line item on their monthly bills showing the subscription fee and their share of the community solar facilities’ output in kilowatt hours during that month. That output offsets their electric consumption based on the number of blocks purchased.

Florida: The Seminole Electric generation and transmission co-op serving Florida’s rural Gulf Coast last August completed what is thought to be the largest community solar facility any utility in the Southeast. Its 2.2 MW system enables Seminole to offer community solar to ratepayers through its nine distribution co-ops.

Customers in two of Seminole’s distribution co-ops, Central Florida Electric and Suwannee Valley Electric, have sold a combined 234 blocks of solar power of the 298 blocks available.

“The valuable information learned from operating this first solar facility will benefit Seminole and our members as we continue to evaluate adding new resources to our energy mix,” said Lisa Johnson, Seminole’s CEO and General Manager.

Tennessee: In a partnership with the Tennessee Valley Authority, the Electric Power Board in Chattanooga in 2016 began developing the Solar Share program. It installed about 4,400 solar panels with a capacity of 1.4 MW. Since it launched in July 2017, residential and business customers have subscribed to about 2,000 panels at $5 per panel per month. One small business, Chattanooga Pediatrics, signed up for 70 panels to cover all of its monthly average electric usage.

Cumulatively, Solar Share has offset almost 1 million tons of coal the Chattanooga Power Board would have had to burn to generate the same amount of electricity, the Power Board says.

Virginia: The first community solar program in Virginia, by the BARC Electric Cooperative, based in rural Bath County, discovered significant demand for sharing solar generation with fellow ratepayers. It flipped the “on” switch during the summer of 2016 to become the first – and still only – operational community solar program to date in Virginia.

BARC’s original system was designed at 550 kW and is meeting 25 percent of the electricity needs of 212 subscribers at a fixed price for 20 years. CEO Mike Keyser said at least 250 additional customers are on a waiting list so it is looking to building another 550 kW of community solar capacity this summer.

While “the sky is the limit” on how big its community system can become, Keyser cautioned that designing a system is a “balancing act between building a system large enough to serve a meaningful number of members, while keeping the total capital costs manageable so that it was not detrimental to our balance sheet.”

Last week, Dominion Energy took initial steps to offer a pilot for a community solar program mandated by a state law passed last year. It has issued a Request for Proposals seeking bids for new systems not to exceed 500 kW. Intent-to-bid notices are due next Thursday, February 1 with formal responses due by February 22.

Kentucky: Kentucky Utilities and LG&E Energy are seeking to sell subscriptions to all 2,000 shares of its “Solar Share” program before it completes construction of a system it has proposed. One share buys power from one solar panel. Thus far, customers have purchased about 900 shares.

Other states: Based on queries to investor-owned utilities there and the National Rural Electric Cooperative Association, thus far Alabama, Louisiana and Mississippi are the Southeast states with few, if any, community solar options whether through co-op, municipalities or investor-owned utilities. Tennessee has two other community solar programs; Arkansas is home to two while West Virginia has one.