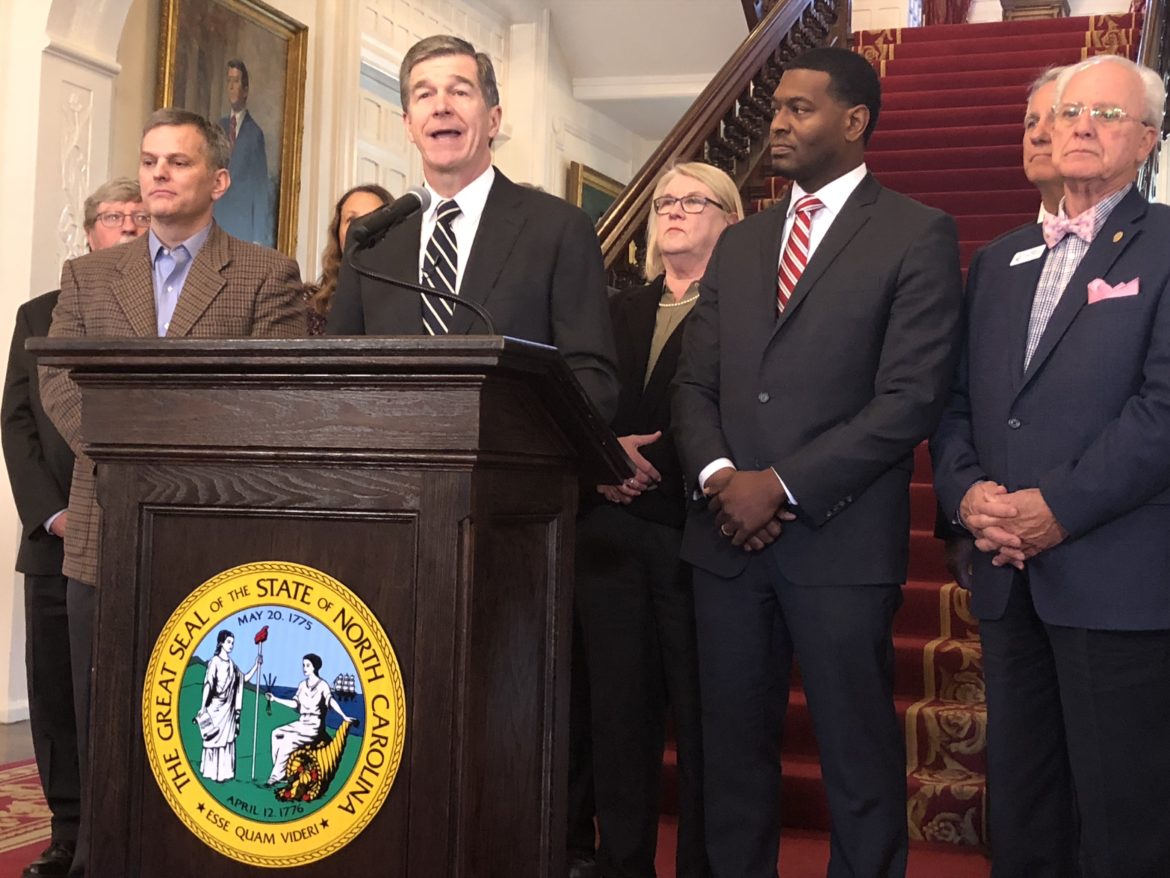 RALEIGH, N.C. — Song, signs, and prayer filled the corridors of North Carolina’s state administration building. Activists would occupy the space all day to protest Gov. Roy Cooper’s approval of a fracked gas pipeline slated to end in the state.

The next morning, it was the governor himself protesting a fossil fuel endeavor. Flanked by scientists and coastal leaders, Cooper met with a top Trump official to object to the feds’ plans to allow oil and gas rigs off North Carolina’s coast.

The contrast between Cooper’s handling of the two issues has frustrated climate activists, who viewed North Carolina as a last line of defense against the interstate Atlantic Coast Pipeline. But the Democratic governor’s different approaches to the controversies likely reflect the legal, political and economic factors that distinguish them.

At a news conference Saturday, Cooper defended his authorization of a crucial water pollution permit for the pipeline as “very consistent” with his opposition to offshore drilling. The former attorney general also alluded to the weak legal footing he felt he had to stop $5.5 billion project. “I directed the Department of Environmental Quality to do everything it could to make sure that this was safe,” Cooper said.

Critics dispute the judgment that North Carolina has limited legal authority against the pipeline. But there’s little doubt the governor stands on firmer ground overall in his fight against oil and gas rigs.

Environmental activists oppose both offshore drilling and the 600-mile pipeline, intended to transport natural gas from West Virginia to Virginia and North Carolina. One introduces the risk of a Deepwater Horizon-style disaster; the other would disturb more than 300 rivers and streams during construction. Both would deepen society’s reliance on fossil fuels.

But other considerations differ.

Deep-pocketed Duke Energy and Dominion Resources, the pipeline’s main investors, have spent years building alliances with Republicans and Democrats in the mostly poor counties along the project’s route. For months, television ads backed by the companies have touted its necessity and benefits.

While critics question the argument that new availability of natural gas will attract industry and jobs to the region, most county officials and economic developers along the state’s I-95 corridor do not.

“It’s an economic development tool that they feel very strongly would benefit them,” said Thomas Mills, a Democrat who ran for Congress in 2016 in a district covering Robeson County, where the pipeline would terminate.

Unlike Duke and Dominion, the extractive oil and gas industry has little foothold in North Carolina. And while some Republicans support expanded drilling, a bipartisan cohort of politicians from the coast oppose the practice, largely because of the potential impact on the state’s multi-billion-dollar coastal tourism and fishing industries.

“If you live on the coast, I don’t care if you’re Republican or Democrat, you’re opposed to it,” said Mills, who also edits the Politics North Carolina blog. “No one wants to see offshore drilling.”

These dynamics may help explain the governor’s near-silence on the pipeline, compared with his numerous media appearances to speak out against offshore oil and gas rigs.

“He’s probably not real thrilled about [the pipeline], which reflects his involvement in it,” Mills said. “He’s kind of left it up to his [Department of Environmental Quality] folks.”

While the state’s environmental department processed the pipeline’s permit application, Cooper ramped up his public battle against President Donald Trump’s plan to allow drilling in virtually every U.S.-controlled ocean.

History shows Cooper’s effort could make a difference. The federal government is required to consult governors on its oil and gas leasing plan, and not since the ’80s has a state been included over the objections of its top executive. In 2016, grassroots opposition derailed the Obama administration’s plans to allow drilling in the southern Atlantic, even when governors were supportive.

When Florida Gov. Rick Scott, a Republican, objected last month to drilling off his state’s coast, he was quickly promised an exemption. “I support the governor’s position that Florida is unique and its coasts are heavily reliant on tourism as an economic driver,” Interior secretary Ryan Zinke said in Jan. 9 statement.

If Florida is excluded from the drilling plan but North Carolina is not, experts say the state would have grounds to sue the Trump administration for an “arbitrary and capricious” decision. Even if Florida is included, advocates believe the feds’ obligation to consider the state’s posture toward drilling gives North Carolina a strong legal foothold.

“We have even better arguments than Florida when it comes to our estuary waters, our unique Outer Banks, how an oil spill would so dramatically affect that,” Cooper said last week. “If North Carolina is unsuccessful in getting exempted through this regulatory process, we will sue in federal court.”

A ‘special reason’ to say ‘no’

In contrast, it’s less clear whether a rejection of the Atlantic Coast Pipeline’s permit would survive an inevitable lawsuit from Duke and Dominion.

The project is governed by a thicket of state and federal laws, covering topics from private property rights to endangered species. But the state’s main legal authority involves waterways.

Section 401 of the Clean Water Act requires states to certify that pipelines won’t irrevocably harm rivers and streams, a threat primarily during construction when they can stir up dirt and other pollutants, damaging sensitive habitat.

“If your concern about the pipeline is that it’s going to increase methane emissions [a potent greenhouse gas],” or slow the transition to renewable energy, said Robin Smith, a former assistant secretary at the state’s environmental agency, “none of those things are in the water quality rule.”

Still, in the last decade, New York and Connecticut have stopped three pipelines by denying 401 certifications, and project opponents had hoped North Carolina would do the same, especially in light of repeated information requests that delayed the project for months.

All along, however, experts cautioned it would be extremely unusual for the state to reject the 401 permit outright. According to state data, North Carolina has denied about 150 such projects since 1984, compared to more than 43,500 applications.

One reason most projects are approved: the law’s default is not whether a project can be built, but how. Applicants often begin conferring with regulators early to circumvent some impacts and minimize others.

Duke and Dominion began those consultations with the administration of Cooper’s predecessor, Republican Pat McCrory. As a result, the companies altered the pipeline’s route to avoid some environmentally sensitive areas and adjusted some construction techniques to be less intrusive.

Another consideration is the federal panel in charge of pipeline approval, which has rejected only two projects out of hundreds of applicants in the last 30 years. That agency greenlighted the pipeline in October, a strong message to state regulators.

“You’ve got to have a special reason to say a flat ‘no’ to a project like this,” Smith said.

Advocates contend there were plenty of those special reasons. Too often, they say, Duke and Dominion failed to justify their technique of stream crossings, or supply enough data to prove the pipeline wouldn’t harm water quality.

“I think they would have been able to defend determining that the companies did not provide adequate information,” said Geoff Gisler, an attorney with the Southern Environmental Law Center.

In any case, late last month, after Virginia and West Virginia granted their approvals, and under pressure from both pipeline backers and foes, North Carolina issued the 401.

On the same day, Cooper announced a $58 million fund to address concerns the water permit couldn’t. The money, provided by Duke and Dominion, will go toward environmental mitigation such as wetland restoration; publicly-owned renewable energy projects like rooftop solar on municipal buildings; and “tap ins” to ensure local access to the natural gas flowing through the 36-inch pipe.

The fund has drawn criticism from environmental activists, Republican leaders, and conservative government watchdog groups, but Cooper said it was necessary “to make sure that there was mitigation and to make sure [the pipeline] was to do what it was supposed to do,” referencing the taps that pipeline backers say will recruit new industry to the region.

Furthermore, Cooper pointed out Saturday, he intervened in a dispute Duke was having with solar developers to get more renewables onto the grid.

“We do need to move toward a 100 percent no-carbon energy future for North Carolina, and I’m strongly in support of that,” he said.

Environmental advocates welcome that pledge, but say the fossil fuel project, even with a mitigation fund and other initiatives, goes in the opposite direction.

“We’re disappointed by [the governor’s] approval of this fracked gas pipeline water permit, which makes his commitment to clean energy harder to fulfill,” the Sierra Club’s national executive director Michael Brune said in a statement.

Pipeline foes also say greenlighting the project runs counter to the cause of environmental justice the Cooper administration has promoted, pointing out the communities through which the pipeline will pass are poorer and more ethnically diverse than the coast or the rest of the state.

“Our poorest region in North Carolina and most diverse rural population in our entire nation need the same protections as our wealthy and favored coastal communities,” said the Rev. Mac Legerton, a landowner and anti-pipeline activist in Robeson County.

The Southern Environmental Law Center  – which has several legal challenges pending elsewhere against the pipeline – says it is still evaluating whether it will contest North Carolina’s approval of the 401 permit in court.

But no matter what, opponents say they aren’t backing down, and that Cooper’s actions against offshore drilling don’t absolve him from allowing the pipeline to move ahead.

“Although it’s fantastic Cooper is fighting for our coast, approving the Atlantic Coast Pipeline demonstrates how committed he is to environmental justice, as well as [fighting] climate change,” said Therese Vick, an organizer with the Blue Ridge Environmental Defense League. “It looks like hypocrisy. It is hypocrisy.”