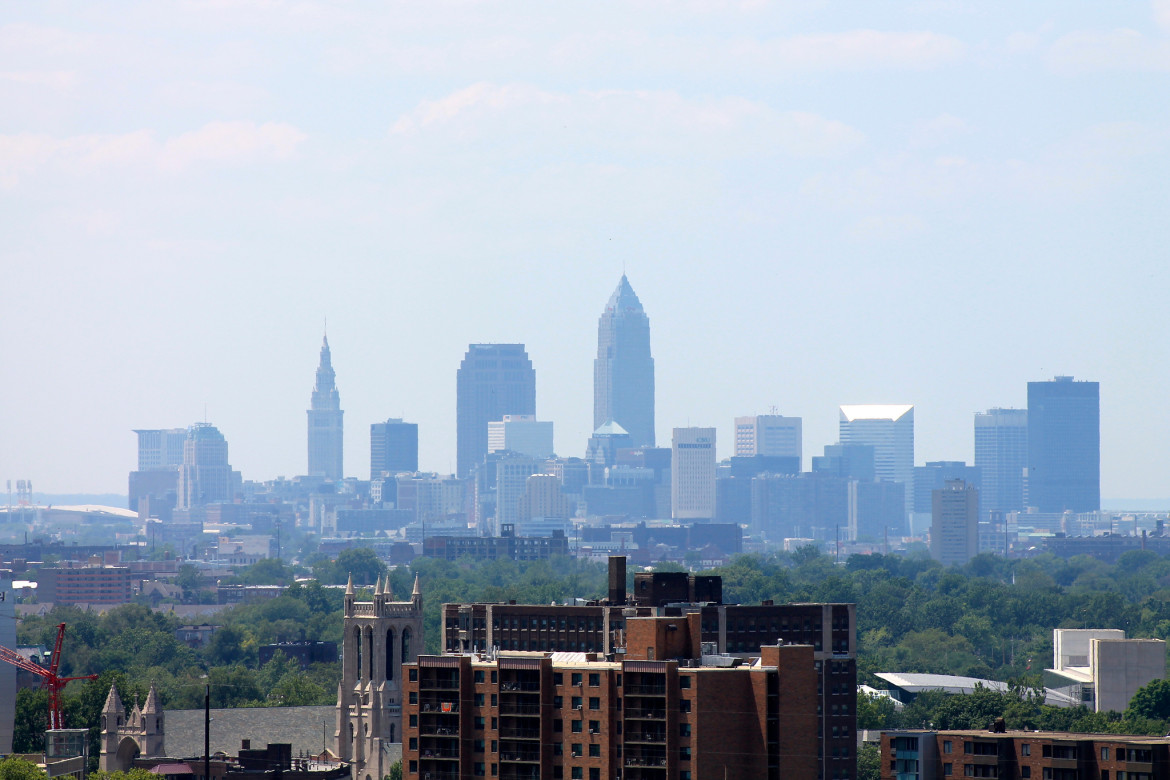 Nicholas Rajkovich crisscrossed Cleveland on bicycle, tailed the entire time by what looked like a sideways glider rigged over his back wheel.

As the urban planner pedaled, the contraption at his back recorded second-by-second readings of temperatures, humidity, radiation and other variables.

The DIY mobile weather station helped Rajkovich, an assistant professor of architecture at the University at Buffalo, identify multiple urban heat islands — literal hot spots within the city where temperatures can be several degrees warmer than surrounding areas.

Rajkovich’s work is helping to inform a growing discussion in Cleveland about how the city and county can make sure its people and infrastructure are prepared for climate change.

Mitigation efforts can still avoid some of the worst impacts of climate change. But with the reality that some impacts are now inevitable, the focus on resilience is growing here and elsewhere.

Cleveland’s risks might not seem as dramatic as the sea level rise that threatens New York or the wildfires that will become more common out West, but the challenges will be nonetheless very real, said Matt Gray, Chief of Sustainability for the City of Cleveland.

Neighborhoods like the ones flagged as heat islands by Rajkovich could face greater risks if the grid isn’t equipped to handle increasing demands. Urban planners view weatherization, tree planting and distributed generation as tools to make a community more resilient.

“Climate change isn’t going to go away, and we need to address this,” said Director Mike Foley at Cuyahoga County’s Department of Sustainability.

Mitigation remains a priority, but some climate change impacts will happen in any case. Over the last decade, Cleveland and Cuyahoga County have generally supported clean energy efforts as mitigation tools. Now local government planners, academics and community groups see clean energy as a tool for adapting to that change.

“Local governments have an obligation and a duty to minimize our greenhouse gas emissions and think about how our local populations address and adapt to climate change,” Foley continued. “No one else is doing it for us.”

The city and county are working with academics, neighborhood groups and other organizations to find ways to minimize potential harms. Yet resilience planning isn’t just about being defensive.

“Mitigating and adapting to climate change sets us up for the future for economic development opportunities,” Foley said. As he sees it, the farther along those resilience efforts are, the better the region will do in attracting and retaining companies with good-paying jobs and revenues.

Rajkovich’s rides and other work helped planners hone in on four neighborhoods. Those areas generally had vulnerable populations — significant percentages of elderly people, people of color, or people with low incomes. Those groups often face larger risks for dealing with extreme weather events and other problems of climate change.

The architecture of those neighborhoods has similarities with other parts of the metro area, so lessons learned there could be applied elsewhere, Rajkovich said. Energy efficiency and targeted weatherization are high on the list of recommendations from his work, right after the top recommendation of greater community engagement and education. Strategic work to increase the urban tree canopy is a third action item.

Energy efficiency, weatherization, and strategic plantings can all lower demand for electricity in the summer and natural gas in the winter. Households get savings on bills with greater indoor comfort, and there are broader public health benefits too.

Those measures would also improve the overall reliability of the grid, he added. Energy efficiency reduces overall peak demand. That, in turn, lessens strains on the system and lowers the risk that cutbacks in service would be needed, he explained.

Planners also want a more diverse electric grid with more renewable energy. Compared to reliance on large baseload plants, such a grid would be less vulnerable to weather-related impacts and other shocks and stresses. Rajkovich cautions that there’s no silver bullet for a more resilient grid. “The scale of it is really daunting,” he said. But “certainly improving the diversity of energy sources can help us.”

If one power source goes down, a diverse grid would be able to draw on other, less centralized generation. And if more clean energy is used, it won’t add to emissions that aggravate climate change. To help with that goal, the Cuyahoga County Solar Co-op is now in its second round. The project educates homeowners about solar energy and offers estimates on costs and likely production rates. If people decide to install solar panels, the program offers bulk prices, resulting in savings over individual transactions.

The county itself is also investing in solar, with a 30,000-panel solar farm planned for a former landfill site in Brooklyn, Ohio. “Construction should start on the project by mid-March, and we hope to have electrons flowing by midsummer,” Foley said.

As more renewable energy comes online, the area’s grid will need better ways to optimize the flow of electricity in multiple directions and to handle multiple types of generation. “It’s both a hardware and a software issue,” said Alexis Abramson, who heads up the Great Lakes Energy Institute at Case Western University. A “living laboratory” has been set up on part of the university to help engineers design and test possible ways to achieve that result. She described the set-up as a kind of “nano grid.”

Preliminary work is underway for a downtown microgrid, Foley said. The microgrid would be a local system of combined heat and power from natural gas, plus some solar energy and wind energy. Most of the time the system would work in sync with the larger regional grid. In case of a blackout, however, the system could rapidly switch to island mode and keep working to meet local users’ needs.

Similar systems are already in operation on a much smaller scale. When Hurricane Sandy struck in 2012, for example, New York University kept the lights on at its downtown Manhattan campus thanks to an underground combined heat and power plant. Elsewhere in that city, the Brooklyn Microgrid offers a small-scale peer-to-peer model for neighbors to buy and sell electricity from solar panels to each other.

Work for a downtown Cleveland microgrid is in the early stages, and the county is taking the lead with cooperation from others. Lots of feasibility studies, engineering work, financing and other tasks lie ahead. “We’ve got a lot of work to do,” Foley said.

“We’re interested in it from a clean energy perspective and [for] resiliency of residents,” Gray noted. “But it really is in many ways an economic development focus as well. Because we really see the future as [one where] businesses and residents are going to want to live in cities where they feel more protected against more of this wetter, warmer, weirder weather we’re seeing.”

The work isn’t intended to take away from the city and county’s continuing work to reduce greenhouse gas emissions. Rather, resilience planning reflects an expansion of priorities. And with extreme weather events likely to become more common, the trend in resilience planning aims to deal with the emerging “new normal.”

“We should not panic. But we should be very aware that there are some disturbing trends coming down the line that are already happening, and it’s going to get worse,” Gray said. “So we need to prepare ourselves accordingly. And that’s really what resiliency is all about.”

Kathiann M. Kowalski was a 2017 Fellow in the Resilience Fellowship Program at CUNY Graduate School of Journalism. This is the first in a two-part series on resilience planning for Cleveland and Cuyahoga County.