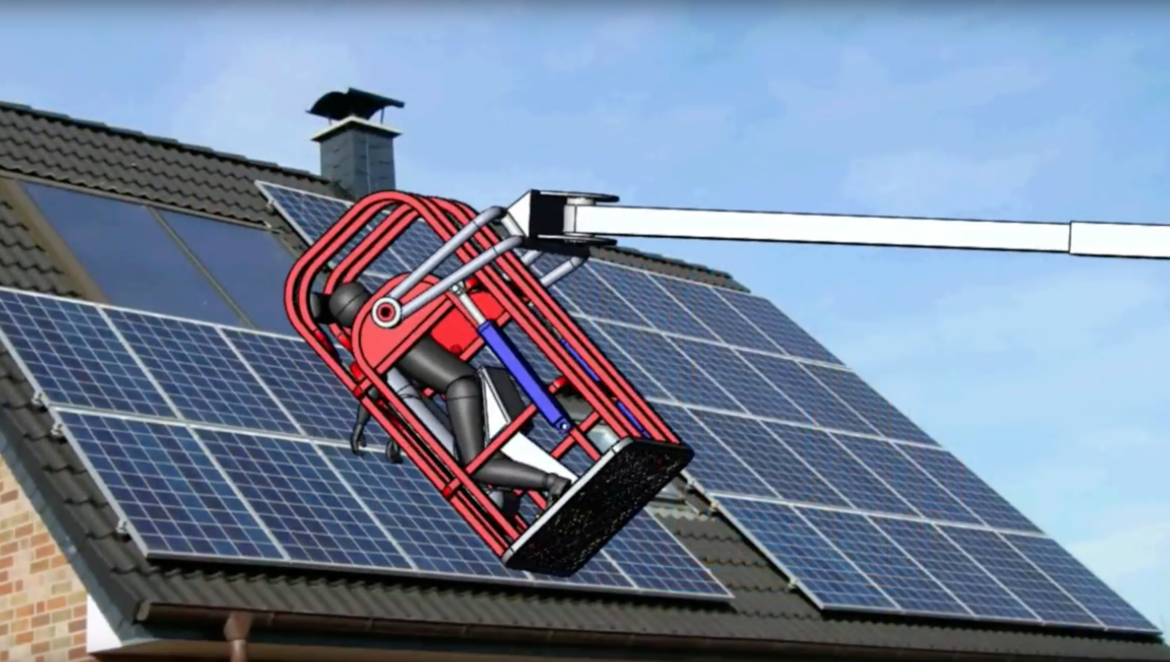 A cage attached to a mechanical lift and can be angled to give workers safe and up-close access to slanted rooftops.

A North Dakota entrepreneur thinks he has a solution that could make it safer and cheaper to install solar panels on steep rooftops.

Matt Conway of Grand Forks, North Dakota, is the inventor of the Human Lift, an enclosed cage that can be attached to a mechanical lift and positioned at an angle to give workers up-close access to slanted rooftops.

His prototype won a 2017 award from Cleantech Open Midwest, a regional division of the nation’s largest cleantech accelerator program.

Cleantech Open mentor and board of advisors member Garrick Villaume said he thinks Human Lift has potential to improve safety and the ergonomics of installing rooftop solar panels. Installers even may be able to reduce their liability insurance rates by using the product, Villaume added.

“They have a really great concept and it’s only going to get better,” Villaume said.

Human Lift will need more testing to perfect the product, Villaume said.  The company needs to learn how comfortable workers will be lying on their bellies during installations, for example.

The company has a working prototype and is raising money to manufacture it. They anticipate eventually selling them for $16,000 per unit, Conway said.

The invention has generated some interest in the solar industry. Managers at Tesla have told Conway they could see the advantage of a lift for installing the company’s solar tiles, a process which first requires the removal of existing roof tiles. Conway and his partner, Keith Homstad, have also spoken to other solar development companies in hopes of getting them to agree to pilot Human Lift.

The product could bring down installation costs by reducing the number of workers required for projects, Conway said. Most installation crews consist of three people, but Human Lift allows the job to be done with two.

“We like to say we increase solar installation efficiency by a third,” Conway said.

Solar installer is one of the country’s fastest-growing occupations but the work remains challenging. Many don’t like working on inclined roofs even when wearing safety devices such as harnesses, Conway said. They tend to carry equipment and panels to roofs on ladders. Planks and ropes help ensure safety and comfort but can cause workers to trip.

It’s unclear how many solar installers are injured on the job because statistics are scarce. Solar installation combines many professions — roofing, carpentry, electricity trades — which have traditionally had a high rate of injury; installer and roofer lingo includes the expression “haunted sleigh ride” to describe a worker who loses balance and begins sliding down an incline.

Human Lift offers foot-based controls that let installers move the boom up and down, or in and out. A rack attached to the lift can carry panels, and another device can bring up solar tiles. The lift should speed the installation process in addition to reducing the need for manpower, Conway said.

Industry installers will have to be convinced the investment will pay off through higher productivity and lower worker compensation costs. Access to capital to buy lifts is difficult, he said, and the industry does not easily embrace change.

The idea for Human Lift came to Conway after operating a mechanical and electrical contracting business that handled more than 170 solar installations. Initially, they positioned an installer in a packing crate controlled by a construction lift. They’re hopeful other fields might be interested, too.

“Anyone who has seen this who has done roof work has said ‘wow, where do I get one?’ because it is [usually] so rough on your body,” Conway said.