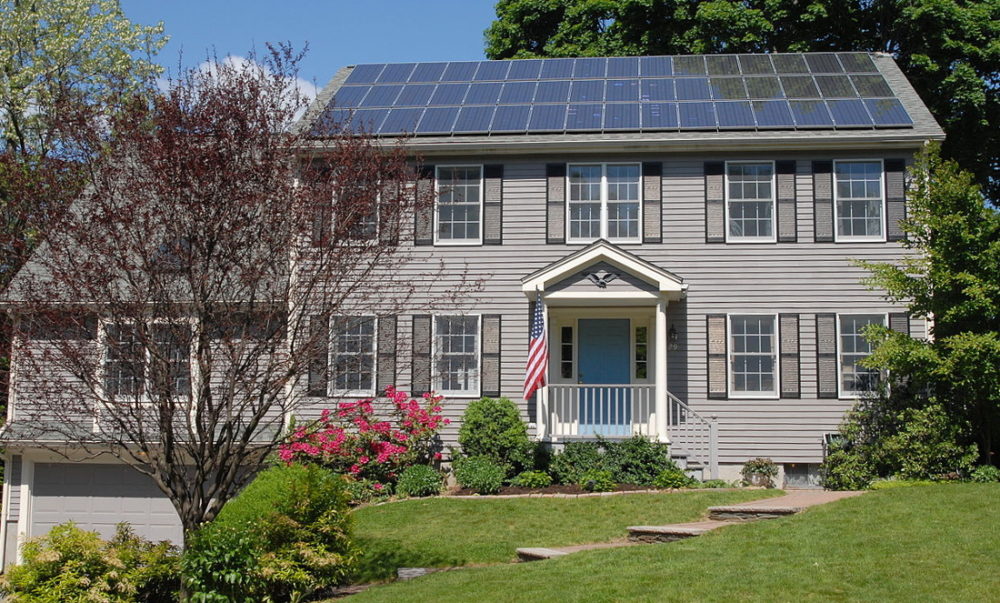 Solar panels on a home near Boston.

Massachusetts solar organizations fear a double-digit jobs slip will lead to a permanent employment slide for their industry if state legislators and agencies don’t tweak policies they say are not friendly to renewable energy.

Six industry and advocacy groups sent a letter to Republican Gov. Charlie Baker earlier this month spelling out how he can intervene to back the commonwealth’s 488 solar employers and 11,530 full-time workers.

In 2017, the industry shed 3,053 of close to 15,000 jobs in the Bay State. It amounts to a 21 percent dip, according to a report by the non-profit Solar Foundation. That came on the heels of 513 job cuts—a 3 percent drop—in 2016. Still, Massachusetts ranks second to California in total solar jobs.

Nationally, the decline was a less severe 3.8 percent, the first reduction since the foundation began tracking jobs in 2010.

To regain the state’s solar momentum, the organizations seek to reverse a surcharge on new net metering customers approved late last year by the state Department of Public Utilities (DPU) at the request of Eversource Energy, which is New England’s largest utility and serves 1.4 million customers in Massachusetts. They also want the state to lift the cap on net metering, claiming that solar projects are being stalled because 230 communities have already reached their limits on the credit received by solar energy system owners.

In tandem, they are asking the state Department of Energy Resources to modify a plan, still in draft form, that lays out how Massachusetts will bring its next 1,600 megawatts of solar power online. Among other things, they hope yet-to-be-defined changes to the Solar Massachusetts Renewable Targets (SMART) program will help to alleviate federal-level setbacks such as the 30 percent tariff that President Trump put on imported solar modules and cells in January.

“It’s kind of the perfect storm,” Mark Sandeen, president and co-founder of MassSolar, told Energy News Network in an interview. “Right now, we have so many things limiting the growth of solar.”

“Those 3,000 jobs that disappeared here aren’t gone,” he continued. “ without such restrictions on solar. When things don’t look good, people have to find a way to survive.”

Utah, Minnesota, Arizona and 26 other states gained solar jobs in 2017, according to the Solar Foundation’s report.

Currently, Massachusetts net metering customers are paid above-market rates for their electricity output. That will change for new customers in January. The DPU green-lighted Eversource’s request for what’s called a monthly minimum reliability contribution (MMRC), which includes a higher customer charge and a new demand charge.

Sandeen noted that the demand charges are based on the hour each month when customers draw from the grid most heavily. That formula can be confusing and complex because Eversource lacks smart meters that could inform households about their peak demand and energy usage.

“It’s horrifyingly bad,” Sandeen said. “If you’re thinking about putting solar on your roof and there isn’t any way for a customer to tell in advance what the charges are going to be, how are you going to enter into a financial contract?”

Such increases could add at least $4,000 to the cost of going solar, which would double or triple the cost for smaller installations, he said.

Eversource says the fixed charges will reduce what it describes as an unfair burden being borne by customers without solar.

“Our proposal … equally charges all customers for the costs associated with (electric grid) maintenance,” spokesman Michael Durand said in an e-mail. “Customers who install net-metered facilities after the end of this year will be paying their share of those costs.”

Meanwhile, the long-delayed SMART program also has solar supporters on edge because of how it reconfigures credit provisions and cost recovery. The successor to the state’s 2010 introductory solar energy program, which brought the initial 1,600 MW online, is still in line for DPU approval.

“We need more details about the distribution of incentives,” Sandeen said about the SMART program. “Solar projects take years to develop. If you don’t know how the financial mechanism is going to work, then it’s quite difficult to get financing.”

About 4 percent of the state’s electricity now comes from 2,000 MW of installed solar.

Advocates wonder how well the relatively modest goal of another 1,600 MW of solar meshes with Massachusetts’ ambitious goal to curb heat-trapping gases 25 percent below 1990 levels by 2020 and 80 percent by 2050.

“It’s small potatoes,” Sandeen said of the 1,600 MW, now that the industry is more robust.

State government officials did not respond to requests for comment.

Legislators have offered up several bills to tackle Eversource’s demand charge as well as the net metering cap, but solar supporters have their doubts about those measures, noting it’s the same Legislature that voted in 2016 to allow utilities to levy a monthly charge on solar customers.

“Just because legislation is introduced to fix this,” Sandeen said, “doesn’t mean it will come to a vote.”