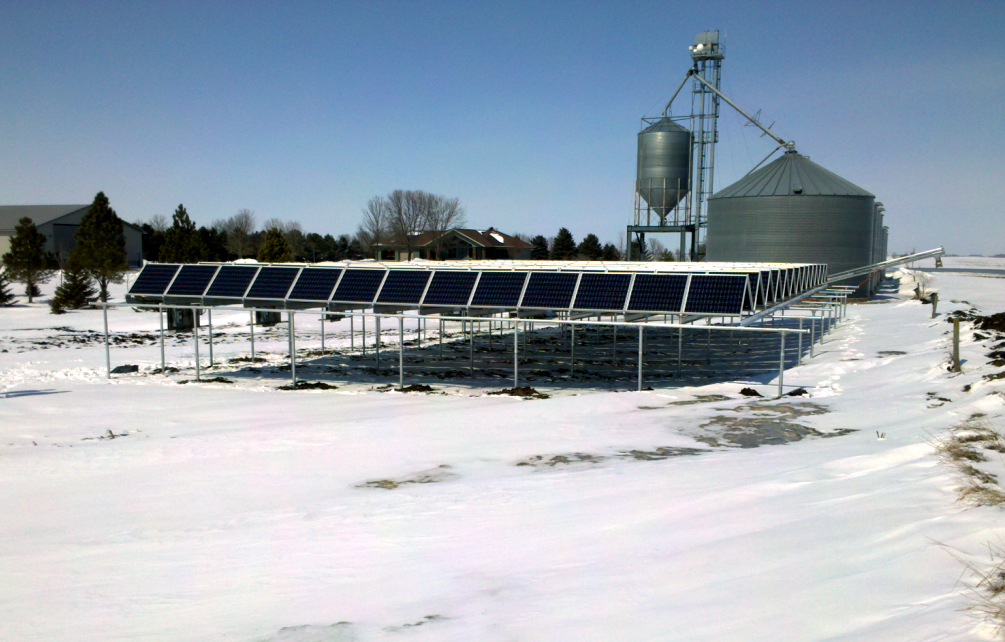 A solar array in rural Minnesota.

In the summer of 2008, Pat Collins was in his tent on a rainy day in the Boundary Waters, reading a book called Earth: The Sequel: The Race to Reinvent Energy and Stop Global Warming. Collins, a science teacher and baseball coach for the Chisago Lakes School District, had been thinking about ways the district could do its part to be more environmentally conscious.

Maybe it was time, he thought, to actually do something. When Collins got home, he got ahold of his middle school principal, John Menard, and told him, “Hey, we should put up 10 Kilowatts of solar! It’ll cost $100,000.”

Menard’s reaction? “He said, ‘You do realize the economy has just collapsed and you want to do what?’ ” Collins recalled with a laugh.

Collins and Menard talked with their colleagues and students and eventually approached the school board, pitching their plan as a community service project that might also save the district some money. The board approved the proposal – for a 44-solar panel array on the middle school – that winter.

Nearly a decade later, nearly 1,000 solar panels now sit on the roofs of the district’s five schools. The power from those panels, along with power the district buys from another 10,000 panels that have been erected in other parts of the county, is expected to save the district $3 million in electricity costs over the next 30 years, according to IPS Solar, the company that developed and installed the panels at the schools.

Collins likes to say that state law should require every public school to undertake a solar project, so convinced he is of the benefits. “Look at what you save and look at what you teach the kids,” he said. “This is really a no-brainer.”

Others seem to agree. In recent years, solar projects have spread fast in rural Minnesota, mostly in the form of “solar gardens” – those blue-paneled arrays, often erected on farmland, that can be seen from highways and county roads all over the state. At the end of 2017, according to the state Commerce Department, 94 solar gardens were up and running across Minnesota, producing 286 megawatts of electricity, or enough to power roughly 285,000 homes.

In Chisago County, farmers and other landowners have put up a dozen solar gardens, with another four in the planning stages. (The county is also home to the massive 100-megawatt North Star Solar – a 440,000-panel, 1,100-acre power utility near North Branch).

Besides inching the state toward its green energy goals, advocates see economic benefits from the panels, including tax revenue for local governments, income for farmers and savings for local subscribers who buy power from solar gardens. The installation and maintenance of solar gardens has created some jobs, too.

Even so, the spread of solar gardens has not been without controversy, with the pace of change and the stark, utilitarian look of the installations – sharp rows of reflecting panels standing where corn or beans once shimmered – the source of some discontent in this bucolic region.

The heart of Ed Eichten’s company, Hidden Acres, is a farm that sits just north of U.S. Highway 8, a winding road that stretches across Chisago County from Interstate 35 in Forest Lake to the Wisconsin border.

A long, snow-covered gravel driveway borders one side of his 20-acre solar garden, which, with its orderly rows of panels, stands out against the rustic charm of the farm: the wire fence that pens in goats, old silos that stand near modern blue ones, a whitewashed building that houses a cheese factory.

On a frigid January morning, Eichten drove me around his farm in a pickup, regretting that he couldn’t show off his 200-head herd of bison. (The animals had been shipped 140 miles west, to a ranch near Sauk Centre, and will eventually be sold to a processing plant in North Dakota). Hidden Acres produces meat and artisan cheese for grocery stores throughout the Twin Cities and for a specialty shop and cafe – popular with tourists in the summer – that sits along Highway 8.

Always looking for ways to do things better, Eichten listened closely a decade ago when local landowners began talking about the possibilities of solar power. So in 2012, he dipped his toe in the solar waters, installing a few rows of solar panels behind his farmhouse; he borrowed $200,000 from his banker – who, he said, was skeptical of the plan – and also received some government and business subsidies. The array produces 40 kilowatts of power, enough for one-third of the electricity needed to power the cheese factory – and to save Eichten $400 to $500 a month. “It takes the bite out of the electric bill, anyway,” he said.

Three years later, Eichten jumped in further, leasing those 20 acres to IPS Solar for the larger, 5-megawatt solar garden. IPS recruited local subscribers – including the school district and a senior center – who pay for shares of the garden that are factored into their bills from Xcel Energy. It’s a way for individuals or organizations to make use of solar power without having to put up panels of their own.

Eichten was the first Chisago County resident to erect solar panels, and his neighbors weren’t sure what to think about them. “Everybody kind of sat back and watched,” Eichten recalled. “Some neighbors stopped by and were pretty supportive of it, though one woman worried that it would be an eyesore.”

He assured her that the array wouldn’t be too visible, noting that “it’s tucked way back in here,” off the highway and partly surrounded by trees. “We were trying to be entrepreneurial, but people thought I was nuts. Well, I didn’t really know anything, either, but you have to take a shot. I know it’s not the answer (to rural economic problems), but I think diversification is.”

As solar gardens have spread, installers have looked for ways to modify their look –by planting borders of trees around them, for instance – and utilize the land on which the panels sit. Eichten has planted pollinator seeds in the garden so that the land can also be used by bee keepers.

In Minnesota, solar power is captured and produced in three main ways: through solar panels that people put on the roofs of their homes or businesses; through solar gardens (like the one on Eichten’s farm) in which “subscribers” who buy shares get credit on their electricity bills; and through large utility sites like North Star Solar.

About 1 percent of the energy generated in Minnesota comes from solar, a renewable source of energy whose growth has benefited from two state initiatives: a mandate requiring utilities to generate 25 percent of their electrical power with renewable sources by 2025 and legislation requiring Xcel Energy’s participation in solar gardens.

In the last few years, solar gardens have begun appearing throughout rural Minnesota – especially on farmland that lay close to power lines and electrical substations. (Eichten’s panels feed electricity into nearby utility poles that then send the power to a substation).

Xcel Energy’s program, called “Solar Rewards,” is the largest solar garden initiative in the country. As a consequence, the company is a partner in about two-thirds of the solar gardens in the Minnesota, according to the state Commerce Department, while smaller utilities in McLeod, Kandiyohi, Sibley and other counties are involved in the other third.

The trend is expected to continue, at least for some time. By the end of 2019, Xcel forecasts that it will bring an additional 310 megawatts online. (The company said that it has 300 projects in development, including 178 in the design and construction phase). Moreover, by 2030, the company expects to be generating 10 percent of its electrical power from solar sources, according to Xcel spokesman Matthew Lindstrom.

Chisago County, with 54,000 residents, is about an hour’s drive northeast of the Twin Cities, a long and narrow region on the map that’s tucked between Isanti County to the west and the Wisconsin border to the east.

In the southern end of the county, Chisago City, Lindstrom and Center City sit just miles apart, connected by a string of lakes that are currently covered with ice-fishing fish houses. The region has retained its Scandinavian heritage, with shops of Swedish trinkets and coffee, busy in the summer, lining the streets. Lindstrom’s sister city, as visitors are reminded on the green population sign at the edge of town, is Tingsryd, Sweden.

About a mile from Eichten’s farm, another solar garden sits on a slightly rolling plot near the city of Shafer. Nearby, he points out another snow-covered patch will soon be covered with solar panels. “There’s a lot of marginal land in this county that can be used for something like this,” Eichten said.

Even so, the solar movement has drawn criticism, largely over a pace of change that has caught some residents off guard. In early January, about 80 people showed up for a county planning commission hearing about the county’s solar power ordinance. Some residents, according to a report in the Chisago County Press, said they believed the ordinance favors solar advocates, that permits for solar gardens were being granted too easily. One man complained about the idyllic-sounding name of such projects – “gardens” or “farms” – arguing that they would more accurately be called “industrial energy generation facilities.”

Kurt Schneider, the county’s environmental services director, said the concerns spurred some important discussion. “Solar does take up farm land,” he said. “One of things that has made it more palatable here is that (some of the land) is not high-quality farm land. There are some other areas of the state where the quality of the farm land has probably influenced the decision on projects more than it has here.

Schneider said the county, after holding work sessions and public hearings, is in the process of fine tuning its solar ordinance. In early February, the planning commission asked for draft changes to the ordinance that would enhance setback requirements for solar gardens and allow for neighborhood meetings as part of the permitting process.

‘Heck of a journey’

Ed Eichten’s father began making cheese in the 1970s; soon after, cheese-makers from around the world began visiting the farm as part of an exchange program sponsored by Land O’Lakes and the University of Minnesota. A map hanging on one wall inside the cheese factory is covered with thumb pins, perhaps 100 of them; each represents a country that has sent a visitor to Hidden Acres.

Eichten added bison to the operation in 1987. Hidden Acres now employs nearly 30 people – 16 at the cheese factory and another dozen at the restaurant and specialty shop near the farm. Yet in an age of corporate farms and uncertainty for small farmers, Eichten sees solar power as another way for him, and other farmers, to diversify. The land where the solar garden sits is marginal, he said; even if he could grow crops on it, a guaranteed payment from the renters beats worrying about corn prices. “Do-gooders complain about (the solar arrays) taking up land,” he said. “But, gee whiz, aren’t we doing good?”

Pat Collins, the science teacher, thinks so. To raise money for the initial solar project – the panels on the middle school – students sold T-shirts, held dances and sponsored a 5K fun run. The kids even got the custodians into the act, agreeing to put their chewing gum in buckets rather than on the floor – and getting paid by the pound in return.

Now, when he considers the solar arrays powering the district – 200 panels sitting atop every school – and sees the solar gardens around the county, Collins wonders what’s next for his community. His only regret is that not many people know about it. “It’s really amazing,” he said. “It’s been a heck of a journey.”

This story was originally published Feb. 28, 2018, by MinnPost, a nonprofit, nonpartisan media organization whose mission is to provide high-quality journalism for people who care about Minnesota.