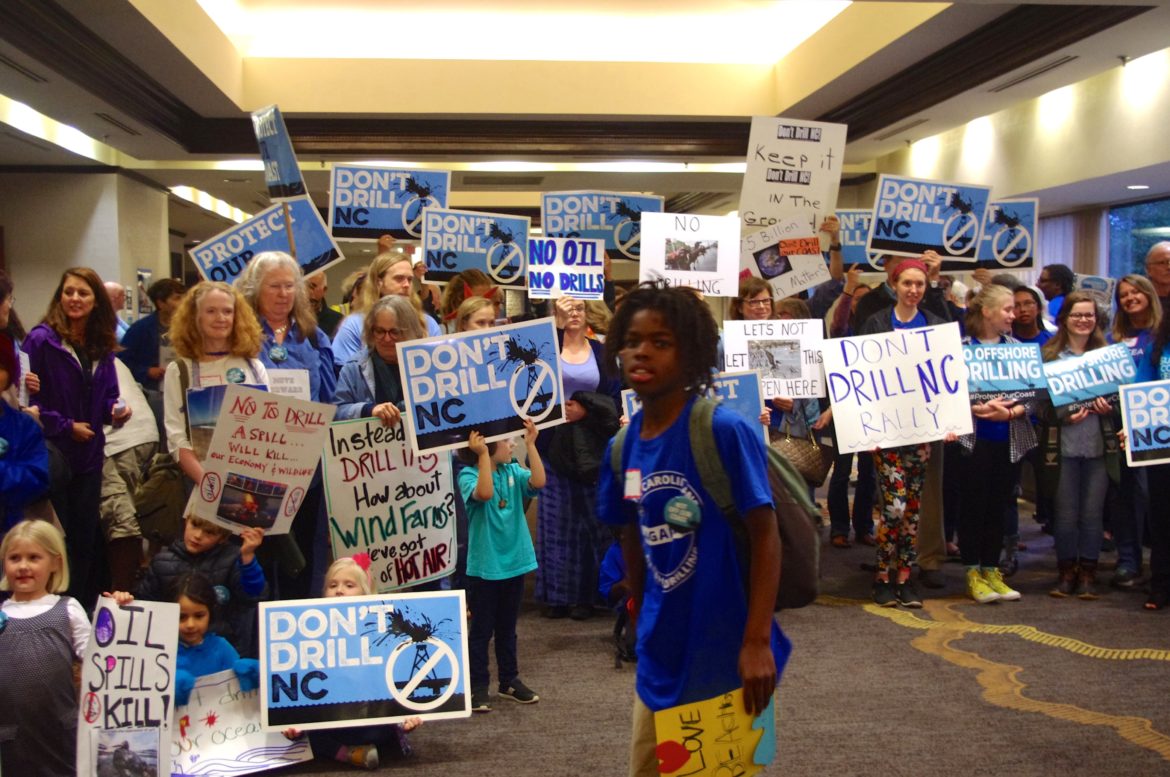 Chanting "no, drill, no spill," opponents rallied outside a public input event on Feb. 26, 2018, in Raleigh, North Carolina.

A pastor who wants to care for God’s garden. A fisherman worried what an oil spill would mean for his crabs. A former mine owner seeking penance.

A public input event for the Trump administration’s offshore oil and gas drilling proposal Monday drew hundreds of people to a hotel in Raleigh, North Carolina, a two-hour drive from the state’s nearest beach community.

Opponents of the plan outnumbered supporters by about 10-to-1. Many arrived by the busload from the coast to voice concerns. Instead of microphones, they found a row of laptop computers where they could log their comments after shuffling past informational booths.

Southeast Energy News heard from people on both sides about what compelled them to give feedback on the federal drilling plan.

Gordon Mordini retired from the HVAC business nearly 20 years ago and lives in Pinehurst, a golfing community about an hour southwest of Raleigh. He’s originally from “the People’s Republic of Illinois,” which he said he couldn’t leave quickly enough because of the taxes. He volunteers with a group tied to the tea party, the local Republican party, and FreedomWorks, a conservative grassroots organization. One of the earliest attendees and one of the few wearing a small red FreedomWorks sticker, he supports offshore drilling because he’s “always wanted this country to be energy independent,” which is good for the economy. Though he doesn’t “believe in going crazy with the environmentalism,” he does want to keep rigs 30 to 40 miles from the coast, where they can’t be seen. “The coast is pristine,” he said.

Briggs McEwan, sun-kissed and sporting a visor, spoke to the raucous anti-drilling rally of hundreds packed into a ballroom on the other side of the hotel. A pizzeria and ice cream shop-owner on the Outer Banks, he said he’d addressed a similar crowd three years ago, when the Obama administration proposed drilling off the state’s coast (the plan was later dropped). “I feel like we just did this,” he said, with a small laugh. He joked that would-be tourists shouldn’t judge his tiny town by the movie set there, Nights of Rodanthe. But then he grew serious. “I have employees who count on the beaches being clean,” he said. Describing the talk he’d had with his young children about why he was trekking to Raleigh, and how drilling could harm the beach they loved, McEwan choked up. After a pause, he explained, “it’s an emotional time.”

A pastor in Apex believes in ‘caring for the garden’

Margaret Herz-Lane lives in Apex, just southwest of Raleigh. She heard about the open house on public radio, and though scores of other drilling opponents wore blue, she just happened to put on a turquoise slicker to fend off the drizzle. A retired Lutheran pastor, she moved to North Carolina a little over a year ago. She’s also lived in New Jersey and Maryland. “In one place it’s called the shore, in one place it’s called the beach, in one place it’s called the ocean,” she said. But the coastline drives tourism in all three states, “and all it takes is one major spill. Animals are hurt, people lose income, and it just doesn’t make sense… It just makes me sad that they’re so short sighted.” She views her stance against drilling through a theological lens, “the whole business in Genesis about how we were created to be stewards, to care for the garden,” she said. So far, “we sure haven’t been very good stewards.”

A chemical engineer retired from Corning Glass Works in Raleigh, Martha Girolami now lives about 20 miles west, in Chatham County. “I was a scientist type,” she said. Raised in Memphis, Tennessee, she’s been in the area for nearly 25 years, and is a fixture at environmental meetings and rallies – especially where fossil fuels are concerned. “We need a huge moonshot kind of program to switch away from these things,” she said. She recalled the Obama administration’s now-defunct plan for drilling off the North Carolina coast. “When I did my first batch of comments it was 2015,” she said. “And now, here we are again.”

Jim Southerland worked at the Environmental Protection Agency for 25 years as an air quality planner and now lives in Cary, just south of Raleigh. He criticized the format of the open house, which included no formal presentation or the chance for attendees to speak publicly. “The whole process is a farce,” he said. “They’re working for the conclusion they want, not for what the facts say, and for what people want.” A self-avowed “former Republican” who did not vote for Trump, Southerland worked another 12 years for the state environmental office after leaving EPA. “In all the hearings I’ve been involved with, it’s more open and participatory,” he said.

A ‘gray panther’ from Kure Beach, dressed in blue from head to toe

A newly retired public-school teacher, Effie Sparrow lives on Kure Beach, one of the string of beach towns south of Wilmington. She heard about the chartered buses to Raleigh from her local paper. She wore a spirited anti-drilling uniform: a floral blue dress and baby blue tights to match. Her bus, which she dubbed the “the gray panthers,” was full of retirees, “the people that can get on a bus and come to Raleigh on a Monday.” Born in Beaufort, North Carolina and raised partially on Cape Hatteras, she’s always cared about the coastal environment. “It’s in my veins. I can’t help it,” she said. Her husband is a surfer, another reason she opposes Trump’s plan. “You can’t surf in oil or money,” she said.

Retirees act on behalf of their grandkids

Dave and Jill Pollock also took a bus from Wilmington, where they moved from Kansas four years ago to be closer to their grandchildren. Dave volunteers with his local Sierra Club chapter; Jill brandished a League of Women Voters button. They spoke clinically about the relatively small amount of oil reserves thought to be off the state’s coast and the need for clean energy. They also talked about their family. “This affects our health and our children’s health!” said Jill. “This is about going [out on] the pier and seeing the leatherback sea turtles, and seeing the schools of dolphins, and going back down to a clean beach with our grandchildren,” said Dave, his eyes suddenly glistening. “It’s not about a little bit of oil,” he said shakily. He collected himself, then acknowledged, “It’s hard not to be passionate about it.”

Coastal native ‘bears all the marks of too much sun’

Priss Endo wore a blue T-shirt that matched her blue frame glasses. She worked as a teacher outside North Carolina for over four decades before retiring in her native Wilmington six years ago. “As I child was nourished by the Atlantic Ocean,” she said, naming the inlets she grew up crabbing and fishing. “So I know that’s threatened, and that’s really scary to me.” But most of all, she’s concerned about climate change and is frustrated by the slow progress of renewable energy. “I bear all of the marks of too much sun,” she said, referring to sun spots that weren’t visible. “I know what sun energy is and not to be utilizing it very much is just heartbreaking to me.”

A one-time mine owner does ‘penance’

Tall, copper-skinned and silver-haired, Bruce Holsten looks the part of a business leader from Wilmington. He also helped found an anti-drilling group called Save Our Sea. “In our investigation, we’ve ascertained that it’s not a national security issue,” he said. “We’re a net exporter of oil.” More than those facts, he emphasized his many years in the mining industry. “I owned a mine,” he said. “I’m serving penance. I’ve done a lot of damage around the world and I’m not going to do it anymore, and I when I see it happening again I’m going to try and stop it. That’s why I’m here.”

‘It’s not about the money’ for this  fisherman

Mark Hooper owns a small seafood business with his wife Penny in Smyrna, across the sound from Cape Hatteras National Seashore. “The shellfish that we produce are coming from what I feel is the best water quality on the East Coast,” he said. A nearby oil spill would taint the sound and shut down the market, losing him money, but the health of the clams would concern him more. “Soft crabs especially, they’re extremely fragile animals.” For him, fishing is a way of life. “It’s not about the money,” he said. Still, he admitted, “people don’t know, how do you reach this administration?” He motioned to the room where he, along with a stream of politicians and coastal leaders, had just addressed the anti-drilling crowd of more than 450. “We can’t do more than we’ve done here,” he said. “I don’t know what the next step is.”