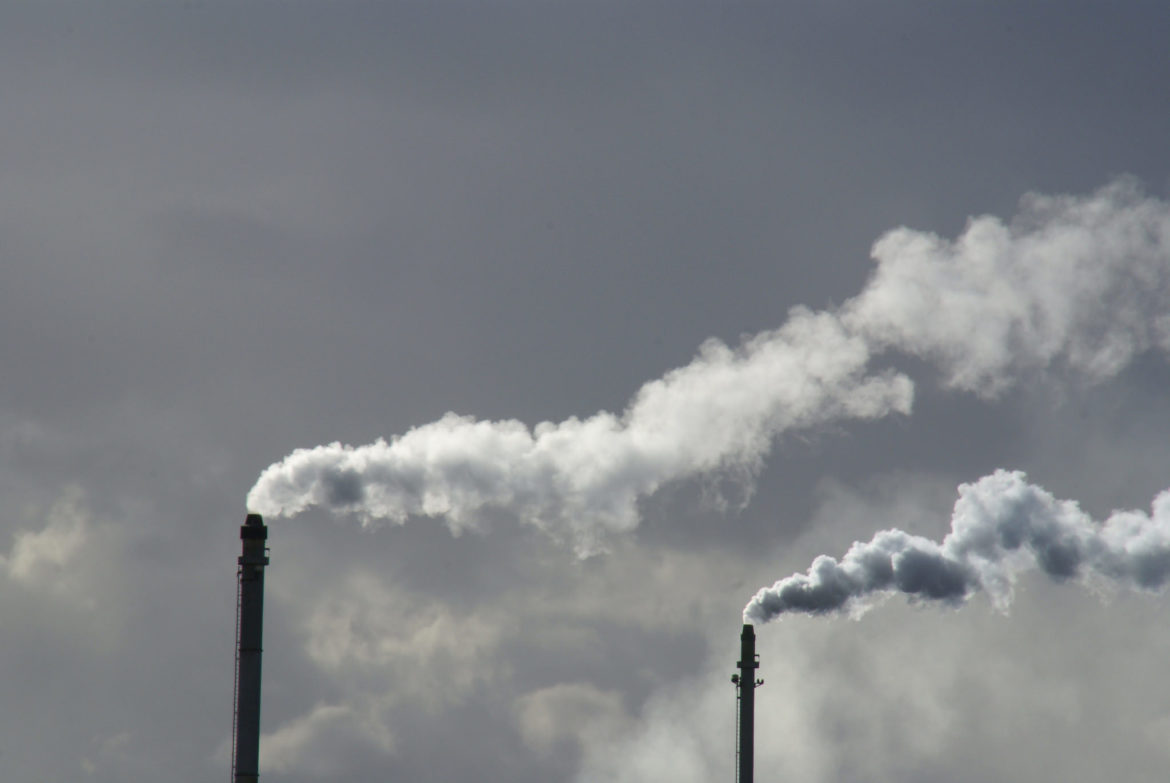 Correction: An earlier version of this story incorrectly listed Ameren’s emissions-reduction goal. It is 80 percent by 2050 in Illinois and Missouri.

A Midwest Energy News review of investor-owned utilities in the region found three-quarters of them have made voluntary renewable or emission pledges that go above and beyond what’s required under state laws.

All but four of the 17 companies have set voluntary goals for renewables, emissions or both. Seven utilities have renewable energy targets, while 10 have made emission reduction pledges.

Here’s a summary of what the companies have promised to deliver in the decades ahead: 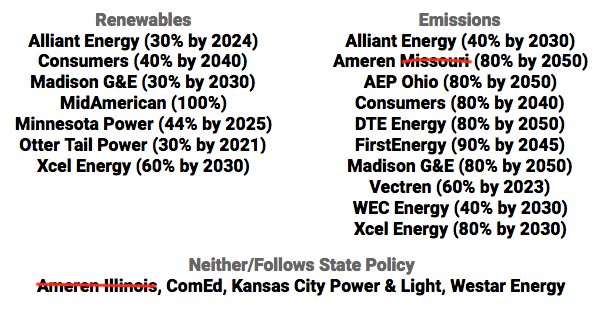 More: Why utilities make pledges, and why some critics are wary of them

Alliant Energy: Covering areas of Wisconsin and Iowa, Alliant last year announced plans to reduce carbon emissions by 40 percent below 2005 levels by 2030. The company also predicts roughly 30 percent of its capacity will come from renewables by 2024, though it doesn’t have a specific target.

Ameren Illinois/Missouri: Illinois and Missouri have renewable portfolio standards of 25 percent by 2025 and 15 percent by 2021, respectively. Ameren pledged last year to reduce carbon emissions 80 percent by 2050.

American Electric Power: The Ohio utility pledged last month to reduce carbon emissions 80 percent from 2000 levels by 2050. AEP says it has already cut emissions 44 percent since 2000, leading advocates concerned its pace will slow down in the coming decades. Ohio’s RPS calls for 12.5 percent renewables by 2027, which the company has already exceeded.

Commonwealth Edison: ComEd says its long-term strategy follows Illinois’ requirement of 25 percent renewables by 2025, which was amended in 2016 under the Future Energy Jobs Act. Advocates say the recent changes will lead to much more in-state renewable generation. “ComEd supports the state’s energy policy and worked extensively with stakeholders to ensure that our customers have clean, innovative energy choices for themselves and for the future,” spokeswoman Liz Keating said.

Consumers Energy: One of Michigan’s two largest utilities, Consumers was one of the most recent to announce long-term goals: 40 percent renewables and an 80 percent emissions-reduction by 2040. The utility says it is on track to meeting a 15 percent statewide RPS by 2021, but opposes a new ballot initiative that would require utilities to hit 30 percent by 2030.

DTE Energy: Michigan’s other major investor-owned utility last year announced an 80 percent emissions-reduction target by 2050, though it has avoided a renewables target, citing the need for flexibility in building resources. Company officials have stressed climate change is a serious issue that needs attention. On March 1, DTE CEO Gerry Anderson was given the Individual Leadership Award by the Climate Registry and the Center for Climate and Energy Solutions in Denver.

FirstEnergy: The Ohio company has set an “aggressive” goal to reduce its carbon emissions by at least 90 percent below 2005 levels by 2045. While it continues to pursue renewable sources, FirstEnergy and its subsidiary, FirstEnergy Solutions, have also been in a years-long battle to preserve its nuclear portfolio.

Kansas City Power and Light: Great Plains Energy subsidiary KCP&L is in the midst of a planned merger with Kansas-based Westar Energy. Spokesman Jeremy McNeive said the utility’s renewable resources “well exceed” state standards in both Kansas and Missouri. (Missouri’s RPS is at 15 percent by 2021, while Kansas has a voluntary target of 20 percent by 2020.) Testimony during merger hearings indicated the companies’ combined renewable mix would hit 24 percent by 2020.

Madison Gas and Electric Co.: The main subsidiary of Wisconsin’s MGE Energy set goals nearly three years ago that go well beyond the state’s 10 percent by 2015 RPS. MGE’s “Energy 2030 Framework” aims for 30 percent renewables by 2030 and an 80 percent emissions reduction by 2050. “What MGE is doing is reflective of our customers’ priorities and values, and our commitment to greater sustainability,” spokesman Steve Schultz said. “And, if we can go further faster by working together with our customers, we will.”

MidAmerican Energy: The Iowa-based subsidiary of billionaire investor Warren Buffet’s Berkshire Hathaway has the boldest goal among utilities surveyed: 100 percent renewables. While it doesn’t have a specific date, it is inching closer: Next year the company is expected to complete its Wind XI project consisting of 1,000 wind turbines and 2,000 MW of capacity. Why such an aggressive goal? “It’s a pretty simple answer: We believe in it,” said spokeswoman Tina Hoffman.

Minnesota Power: Serving fewer than 150,000 customers in northeastern Minnesota, this Allete subsidiary pledged last year to hit 44 percent renewables by 2025 as part of its EnergyForward strategy. While the company’s strategy includes more wind and solar, the company faces opposition for its plan to invest in a new natural gas plant in Superior, Wisc.

Otter Tail Power Co.: Otter Tail pledged in 2016 to reach 30 percent renewable portfolio by 2021. Spokeswoman Stephanie Hoff said the utility serves customers in Minnesota, South Dakota and North Dakota, and is able to balance the regulatory demands in all three. “For us, it’s critical to have a healthy balance (of resources) that is economic, reliable and environmentally responsible,” Hoff said.

Vectren Corp.: In late February, Indiana-based Vectren announced it is closing three coal plants and replacing them with a mix of solar and natural gas. The company anticipates the move will reduce carbon emissions by 60 percent by 2023. Indiana, meanwhile, has a voluntary state renewable energy target of 20 percent by 2020.

WEC Energy Group: Wisconsin’s largest utility, which has subsidiaries throughout the region, plans to cut carbon emissions 40 percent below 2005 levels by 2030. The company is “making good progress,” said spokeswoman Amy Jahns, through closing the Pleasant Prairie coal plant and investing in utility-scale solar.

Xcel Energy: One of the region’s largest utilities also has some of most aggressive clean energy goals. The Minneapolis-based company recently doubled its renewable energy pledge from 30 percent (announced in 2015) to 60 percent by 2030. In that timeframe, the utility expects 85 percent of its generation to be carbon-free. “This strategy will not only bring more clean energy to the market, it will also keep bills low for our customers,” the company said in a statement.

More: Why utilities make pledges, and why some critics are wary of them

Correction: Ameren Missouri has pledged to reduce emissions 80 percent by 2050. An earlier version of this story misstated the pledge.