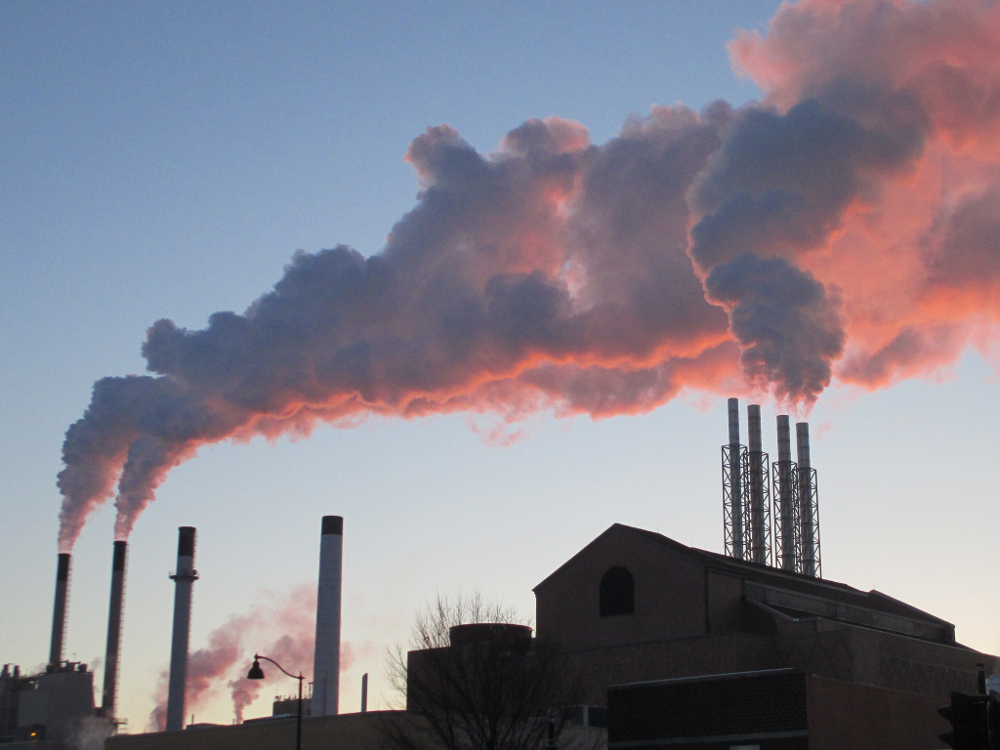 Steam rises from the Blount Generating Station in Madison. Madison Gas and Electric converted the plant from coal to natural gas in 2011.

Most investor-owned utilities in the Midwest have made voluntary renewable or emission pledges, but the commitments aren’t binding and lack urgency, critics say.

In February, Michigan activists began circulating petitions to put a 30 percent by 2030 renewable energy standard on the state’s November ballot.

Consumers Energy, which spent $12 million to help defeat a similar proposal in 2012, quickly expressed its opposition to the new campaign.

A week later, though, the company made news with a pledge: it would generate 40 percent of its power from renewables by 2040.

The announcement was the latest example of a large, investor-owned utility in the region promising to boost renewable energy or cut carbon emissions even as it balks at legislative requirements to make good on those pledges.

A Midwest Energy News review of investor-owned utilities in the region found three-quarters of them have made voluntary renewable or emission pledges that go above and beyond what’s required under state laws. It found:

The voluntary pledges allow utilities to set the terms and timeline for their investments in renewable energy. They often draw positive headlines, and ultimately they don’t conflict with the companies’ bottom lines as the cost of renewables continues to fall.

Critics, though, say that most utility pledges lack urgency and allow them to continue burning fossil fuels for decades. They also have potential to obscure the need for extending state renewable energy standards.

In Michigan, utilities are on track to meet a state-required 15 percent renewable portfolio standard by 2021. The pledge last month by Consumers Energy would more than double that target by 2040, and it’s separately vowed to cut emissions 80 percent during that same time.

Consumers Energy President and CEO Patti Poppe told reporters last month that the company is already halfway to its emissions goal, largely due to the closure of seven coal plants in 2016. “We’re not waiting until 2040. This plan continues to show action,” she said.

But voluntary pledges, unlike Michigan’s more modest renewable mandate, allows the company flexibility in how they reshape their generation portfolios and invest in new power plants or infrastructure.

“We don’t want anyone to think we’re against renewables,” said Irene Dimitry, vice president of business planning and development for DTE Energy. “The ability to take advantage of market dynamics and pace our investments overall — so we’re pacing rate impacts — we think that’s really important.”

Renewable costs continue to decline, and being forced by law to lock into contracts today could mean customers pay more than if the company staggered investments to take advantage of falling prices, Dimitry explained.

Cathy Kunkel, an energy analyst with the Institute for Energy Economics and Financial Analysis, said it’s “not terribly surprising” that utilities would oppose state-level mandates while simultaneously pledging to surpass them.

“Obviously utilities and their shareholders would rather do things on their own terms than what’s legislated or directed by voters,” Kunkel said. “They would rather have more flexibility.”

While utilities say their goals benefit the public and ratepayers, they also appeal to shareholders.

Investor-owned utilities and their national trade group, the Edison Electric Institute, say they are adjusting to changing customer and corporate attitudes and declining costs of renewables and natural gas.

“While we absolutely want to make sure we’re making decisions that are as cost-effective as possible for customers, we do have shareholders that make our business possible,” said Stephanie Hoff, spokesperson for Otter Tail Power, which serves parts of Minnesota, North Dakota and South Dakota.

And appealing to shareholders means investing in utility-owned generation, including natural gas, solar and wind. Otter Tail Power has pledged to achieve 30 percent renewables by 2021, and much of it from the purchase of wind farms.

Wisconsin-based WEC Energy is making progress toward a pledge to cut carbon emissions about 40 percent below 2005 levels by 2030, and the transition is being driven by the economics of gas and renewables.

Larry Ward, executive director of the Michigan Conservative Energy Forum, which advocates for expanding clean energy options, said there are “probably a couple different reasons” utilities are making these pledges.

Critics say it’s good utilities are committing to renewables, but the goals are not binding. They also tend to be long-term — some stretch beyond 30 years — giving utilities years to keep burning coal or build new natural gas plants.

“Unfortunately, many of these companies are still investing in fossil fuels and advocating for public policies that are at odds with their newly stated goals,” said Matt Kasper, research director at the Energy and Policy Institute, a utility and fossil fuel industry watchdog group. “Because of that, utilities haven’t earned the trust to enact pollution reduction goals voluntarily.”

DTE, for example, has pledged to cut emissions 80 percent by 2050 and said renewables will play a larger role in its portfolio. But it’s also seeking to build a nearly $1 billion natural gas plant, the type of investment that could postpone more aggressive emission reductions needed now to address climate change.

“From a climate perspective, these utilities shifting from coal to gas … is a massive emissions reduction failure,” Kasper said. Ameren Missouri and American Electric Power in Ohio also plan to shift their coal capacity mostly to natural gas.

Thomas Lyon, a professor of business economics and public policy at the University of Michigan, said he doesn’t take pledges that stretch until 2050 very seriously. “It leaves you 20 years to change your mind,” Lyon said.

Utilities are pursuing pledges because of the economics of coal and natural gas, Lyon said. If gas prices spiked, companies would likely change course.

“I think it’s more of a forecast than a pledge,” Lyon said.

In Minnesota, where utilities met a 25 percent renewable energy mandate seven years ahead of schedule, a bill introduced this month aims to double the standard to 50 percent by 2030. Meanwhile, the state’s largest utility, Xcel Energy, has pledged to get 60 percent of its power from renewables by then.

One of the bill’s co-authors, Sen. John Marty, thinks Xcel Energy taking the lead helps his bill by showing the target is realistic. “Every time they voluntarily do things, it enables us to do more,” said Marty, a Democrat from suburban St. Paul who is the minority ranking member of the Energy and Utilities Finance and Policy Committee.

That said, Marty doesn’t think Minnesota would be where it’s at today with renewables if it wasn’t for the state’s existing 25 by 2025 standard.

“They move because they’re pushed,” Marty said. “Now the market has come along and they say this is actually pretty good. Our job is to push them further than they feel comfortable with but make sure we do it in a way so they can succeed.”

The bill isn’t expected to gain traction this session, as Republicans control both chambers and Democratic Gov. Mark Dayton prioritizing bonding, clean water, and a myriad of other issues.

State Rep. Pat Garofalo, a Republican from the Twin Cities area, says new technology and the cost of wind and natural gas is driving renewable energy and emission reductions.

“Renewable energy standards are like a 1980s solution to a 21st-century problem. It’s the solution of yesterday,” Garofalo said. He added that if long-term pledges make utilities “feel better and gives them public-policy self-esteem, I see no harm in that.”

Utilities and conservatives who support clean energy agree the declining cost of renewables mean cleaner portfolios will be market driven. In Michigan, that argument is likely to come up in the months ahead as activists and utilities debate expanding the state’s renewable portfolio standard.

“Our situation shows that we can make progress as a company and a state and society — we don’t need a mandate,” Dimitry, of DTE, said. “We’re going to do the right thing.”

One thought on “Utility renewable pledges go above and beyond state laws — but why?”