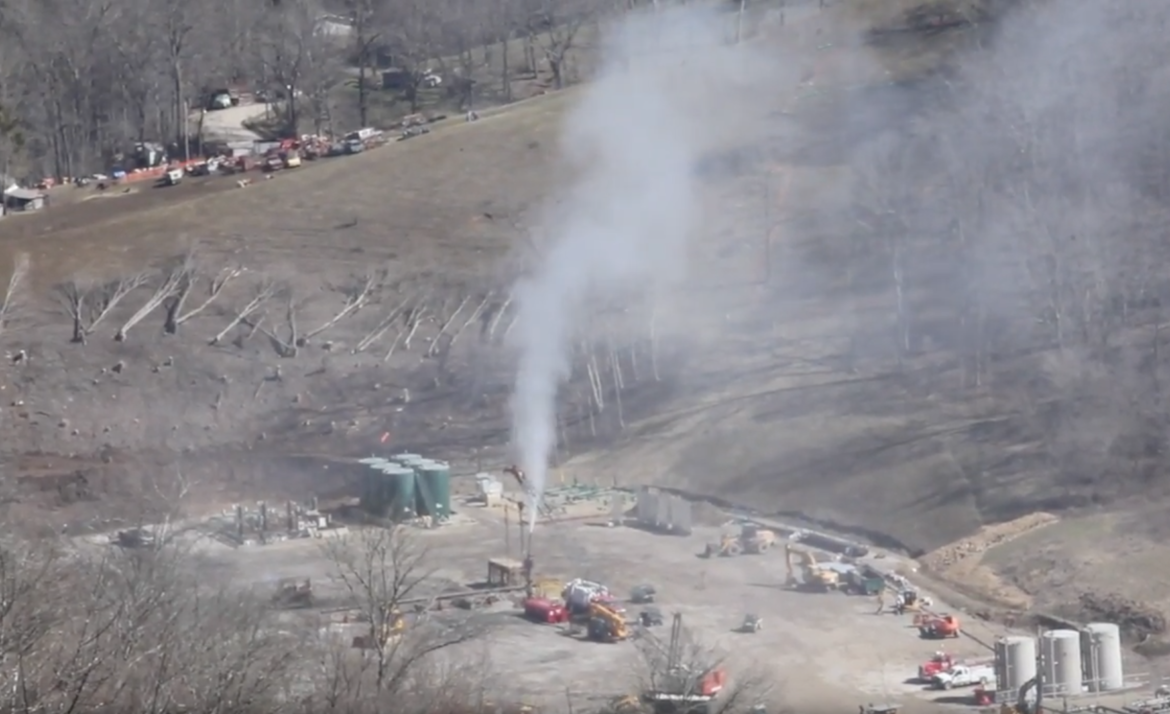 A February 2018 gas leak at well near Powhatan Point in Belmont County, Ohio.

An explosion at a well pad in eastern Ohio last month forced nearby residents to evacuate for three weeks while crews worked to cap a gas leak.

The incidents illustrated a risk related to natural gas production, not just to a community’s safety but the planet’s climate, too.

Both blasts triggered an uncontrolled release of methane, a potent greenhouse gas. Such accidental and other “fugitive” emissions are poorly tracked and compromise some of the benefits from the recent shift to natural gas.

In Ohio, most of the state’s progress in cutting greenhouse gas emissions has come from natural gas displacing coal for electricity generation. Natural gas releases fewer carbon emissions than coal when burned, but the accounting on climate progress often ignores upstream releases during extraction, processing and distribution.

Tallgrass Energy estimated 23.5 million cubic feet of gas were released as a result of the January 31 explosion on its Seneca Lateral Pipeline. The pipeline transports gas from the MarkWest processing plant to the Rockies Express Pipeline. The company shut down flow to that part of the pipeline the same day, cutting off the emissions.

“Our emergency response plan worked as it was supposed to during this incident, and we’re grateful for the fast and efficient efforts of first responders to help us secure the site safely,” TallGrass spokesperson Phyllis Hammond said. “Working together we ensured there were no injuries.”

The well pad explosion involved a blowout that led to uncontrolled venting of gas, according to a February 17 memo from on-scene coordinators for the U.S. Environmental Protection Agency. “Natural gas, produced water, and brine [have] been discharged along with unknown condensate components,” the report noted. It estimated the volume at that time to be 100 million cubic feet per day.

A video from environmental advocacy group Earthworks showed that gases continued to escape from the site, owned by XTO Energy, on March 5. A spokesperson for the company, Karen Matusic, said the gases were primarily methane, a nontoxic, odorless and colorless gas. “The volume of emissions and the length of time this volume has been emitted to the atmosphere are very unusual,” said Bruce Baizel, energy program director for Earthworks. “So this event has large climate implications, assuming the bulk of what we see is methane.”

The two recent Ohio accidents and similar events don’t tell the whole story, however. “Hundreds and thousands of smaller emission sources happen every day at oil and gas facilities,” Baizel said, adding that the story of those emissions is largely untold.

Leaks or intentional flaring of methane happens at some sites on an ongoing basis. In contrast to the recent large accidents, those releases are largely preventable, said Melanie Houston, who heads the Ohio Environmental Council’s climate programs. Controlling those emissions “would require a little bit of upfront costs from the industry, but they would be able to recoup those costs and capture more of their resource,” she said.

Methane “can cause very rapid warming over a short time period,” said Amy Townsend-Small, an environmental scientist at the University of Cincinnati. “The kinds of climate tipping points that we are really were hoping to avoid — that’s the kind of thing that a sudden increase in methane emissions can trigger.”

By tipping point, she means something that would cause a substantial change in habitats and make recovery very difficult and perhaps impossible for systems and organisms that depend on them, including people.

“Fugitive emissions will always be a problem and poorly understood because we don’t have the instrumentation in the field to measure this stuff,” said Ted Auch, Great Lakes program coordinator for FracTracker.

As Ohio moves away from coal, carbon emissions continue to fall

A team led by climate change scientist Francesca Hopkins at the University of California, Riverside recently put together an inventory of California’s methane emissions. Although the work can identify sources for emissions, getting firm figures on the amounts of greenhouse gases released is tougher, Hopkins said. Weather conditions, intermittent sampling and other factors make it hard to calculate precise quantities from open-air concentrations. She reported on that work at last month’s annual meeting of the American Association for the Advancement of Science in Austin, Texas.

Ohio is ahead of many other states when it comes to regulating emissions from the natural gas industry. Many oil and gas well sites must submit information about annual emissions of particulate matter, sulfur dioxide, nitrogen oxides and certain organic compounds, said Ohio EPA spokesperson James Lee. Air permits for natural gas well pads and compressor stations require quarterly leak detection and repairs of any leaks found, he said.

“Malfunctions must be reported to Ohio EPA immediately,” he added.

But the data don’t encompass all greenhouse gases from the industry, Townsend-Small noted, adding that she and others don’t have resources for comprehensive surveys on an ongoing basis.

The Obama administration adopted more comprehensive federal rules, but the U.S. Environmental Protection Agency under the Trump administration stayed certain rules last year. On March 1 the agency formally proposed withdrawing parts of the regulations. The Bureau of Land Management also moved to postpone a methane waste reduction rule. For now, a February 22 court order has stopped that action, but further appeals could change that.

Health is also a concern, especially because Ohio’s Utica Shale Play produces mostly wet gas. That means other hydrocarbons are mixed in with the gas.

“Some of those are toxic,” Townsend-Small said.

The Ohio Environmental Council has called for increased setbacks from oil and gas wells. Without monitoring, people in communities may feel they lack trustworthy information, Townsend-Small said. And companies could be losing more product than they know. In her view, reliable monitoring would be a good first step toward addressing both concerns.

“Using natural gas has a lot of potential benefits, which include that it releases less carbon dioxide when you burn it,” compared to other fossil fuels, Townsend-Small said. But, “if we are releasing a lot of methane from the natural gas supply chain, which is still a question, then we could be cancelling out some of the greenhouse gas benefits of this switch.”