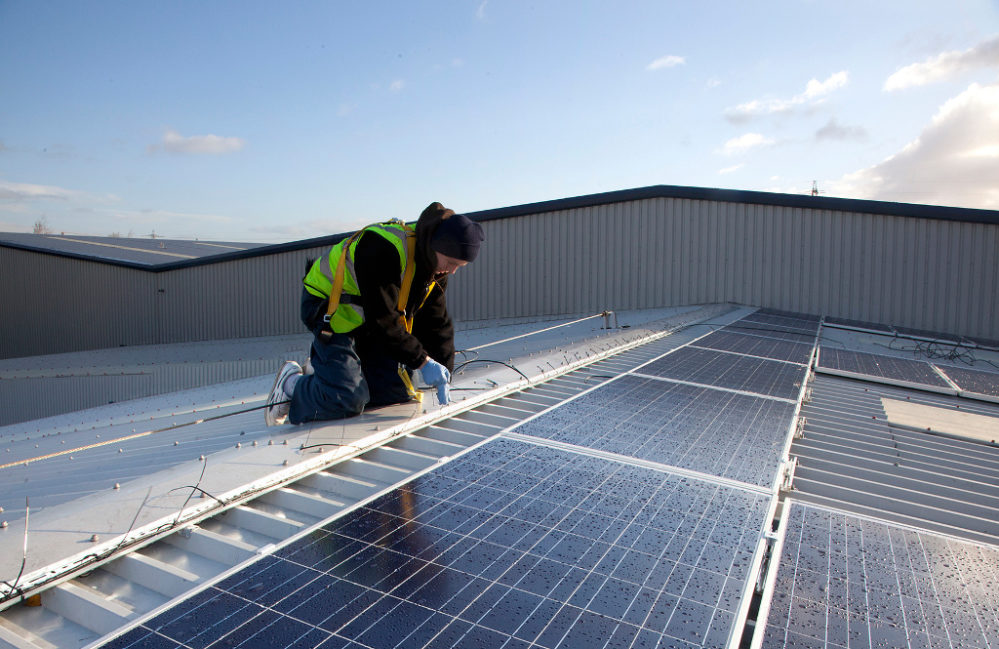 PACE financing in Illinois could include solar panels and other clean energy installations, in addition to energy efficiency improvements.

ComEd, the state’s largest utility, argued that its customers would be subsidizing municipal and co-op customers if they were allowed to receive solar incentives.

Thousands of customers of electric cooperatives and municipal utilities in downstate Illinois will not be able to take advantage of new incentives for distributed and community solar if the Illinois Commerce Commission upholds a proposed order by an administrative law judge.

The Future Energy Jobs Act (FEJA), passed in late 2016, is meant to create about 1,300 MW of new distributed and community solar in Illinois through Solar Renewable Energy Credits (SRECs) that can be sold by the owners of the installations to offset costs.

But the judge’s recommendation on Feb. 26 would prohibit customers of municipally-owned utilities and electric cooperatives from selling SRECs or benefitting from adjustable block grants meant to spur the creation of new solar. Only customers of utilities ComEd and Ameren would be eligible under the proposed order.

Now, solar developers say, projects already in the pipeline will likely be canceled and fewer solar installation and marketing jobs will be created.

“I’m very, very disappointed. It’s like I had the rug pulled out from under me,” said Ron Cloninger, a Canton, Illinois, resident who had signed a contract for a 9.86 kw solar installation, thinking the FEJA incentives would cover about 40 percent of the $28,000 cost.

He learned about the incentives from solar developers and advocates at a farm show in Peoria last fall and was excited to immediately move forward with solar. Now he expects he’ll cancel the project. The incentives “made it feasible for us to do it. We were really counting on it,” said Cloninger, a customer of the Spoon River Electric Cooperative. “Otherwise I wouldn’t have even looked at it.”

The law calls for prioritizing solar development and the creation of solar-related jobs in low-income, minority and rural areas. Developers say the exclusion of muni and cooperative customers will make solar inaccessible for many in economically struggling areas.

“Those rural communities are some of the poorest in the state,” said Illinois Solar Energy Association executive director Lesley McCain.

In central and southern Illinois, almost 1-in-4 electric customers are served by munis and co-ops, according to McCain. She said that since June 2017 when eligibility for FEJA incentives began, 87 solar projects have been built in those areas, likely driven specifically by the expected incentives. And 222 solar projects were planned in those areas that now might be canceled, she said.

Judge Leslie Haynes will issue a final order later this month, and then the commerce commission will decide whether to adopt it. A public comment session is scheduled for March 21.

“Up until now, co-ops and munis could participate in any of the incentive programs” offered for solar in Illinois, including rebates and past supplemental procurements of RECs meant to meet the state RPS, said McCain.

The Environmental Law & Policy Center argued in a brief filed before the commerce commission that past precedent means muni and co-op customers should be able to sell RECs, since in the past the Illinois Power Agency (IPA) — which procures power on behalf of ComEd and Ameren customers — has procured RECs from customers outside of those utilities’ service areas. “This new and unanticipated restriction eliminates large areas of Illinois from the RPS, conflicts with the statutory intent to benefit all Illinois residents, departs from the IPA’s historical practice, and creates uncertainty and confusion at the very moment that clarity and stability are most needed at the outset of the IPA’s new solar programs.”

Shannon Fulton is director of commercial sales for StraightUp Solar, the largest solar developer in downstate Illinois. She said the company installed 35 residential distributed solar projects, a total of about 550 kw, in muni and co-op territory in 2017, representing just over a third of StraightUp Solar’s business.

Now she fears that two projects in the works worth $96,000 could be canceled. And she said 12 customers who paid cash for recently completed solar installations likely did so with the expectation of incentives that they now won’t receive.

Under FEJA, solar installations under 10 kw can be paid the value of an SREC up front. While the exact SREC system is still being determined, Fulton said this would likely mean about $13,600 for a 7-9 kw solar installation, representing up to 40 percent of the total cost for an installation like the one Cloninger planned.

Fulton predicts the exclusion of co-op and muni customers will mean a 30 to 50 percent drop in StraightUp Solar’s residential sales in 2018, or a loss of about $2 to $3 million in revenue. She said the company added about 10 employees last year because of the expected uptick in business. The judge’s ruling likely means they will hire six to eight fewer people this year than they would have otherwise, she said.

“We’ve been ramping up our team size over the past six months in anticipation, and having this coming so late into that plan creates a hardship for us,” Fulton said. “We were expanding and therefore our overhead and everything else that goes along with it was expanding as well.”

Michelle Knox founded WindSolarUSA based in Springfield in 2008. She said 70 percent of her company’s business is in muni and co-op territory.

“I have no question that when legislators passed FEJA, they intended the law to expand opportunities across the entire state,” Knox said in a statement to the commerce commission. “I am confident that when Gov. [Bruce] Rauner signed the law, he couldn’t have envisioned huge swaths of Central and Southern Illinois being cut out of the benefits. I am also hopeful that the Commission will fix this wrong.”

Fulton said that muni and co-op customers in the area typically do pay higher bills than Ameren customers, so before FEJA their payback time on purchasing solar would likely be shorter than that of an Ameren customer.

“But certainly the delta [between Ameren and muni or co-op rates] does not make those projects happen without the incentive,” she said.

“Even our capitol city could not participate,” McCain noted.

Pam Richart is co-founder of the Eco-Justice Collaborative, an organization focused on helping downstate communities transition away from economies centered around coal. Last summer she joined solar developers and clean energy advocates holding forums around Illinois informing residents of the opportunities for solar development under FEJA.

“People came — they wanted to know what was up and how they could get involved,” said Richart.

She said exclusion of muni and co-op customers will mean more disillusionment and frustration for communities who have long felt alienated and abandoned by the state government and industry.

“Once again, here we are at the cusp of something really great, and we aren’t going to be able to receive all the benefits of it,” she said.

Carol Hays, executive director of the Prairie Rivers Network, said it is a blow particularly for those who hoped solar jobs would stimulate flailing local economies.

“[FEJA] would create an opportunity for non-fossil fuel-based economic drivers which could expand in lots of ways into the future,” she said. “It would have allowed young people to learn a new skill that they could have used in the region, and now demand for that is diminished. It’s a bait and switch, and it sets up unequal access.”