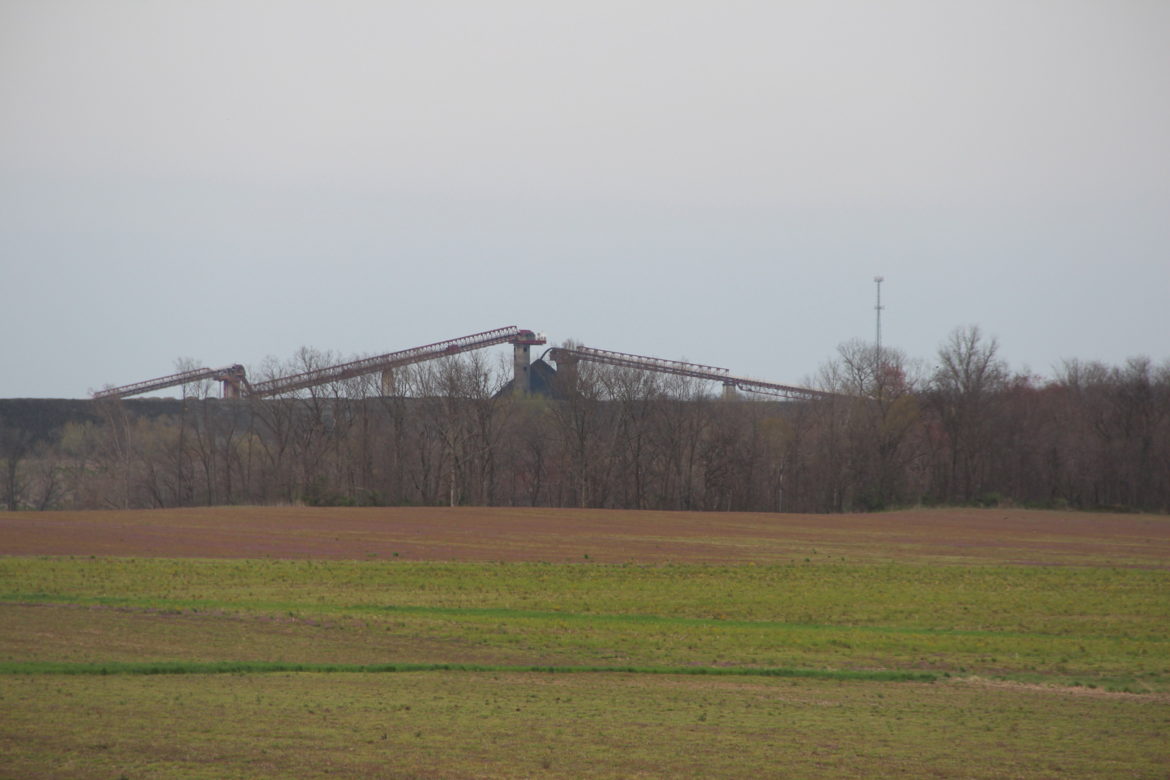 Second in a three-part series

Tuesday: Why TVA coal from the Illinois Basin is still lucrative and in-demand

Four decades ago, the Tennessee Valley Authority bought up more than a billion tons of coal in Illinois to ensure adequate reserves for its coal-fired power plants. The farmers who sold their mineral rights were happy to help support the country’s energy security.

Today, energy security through coal is an outdated concept, with the TVA having closed six of its coal-fired power plants in the last five years. The government-owned utility, which provides power for 9 million people in seven Southeastern states, increasingly relies on natural gas-fired generation and renewable sources, mirroring the nation’s overall energy shift.

Yet demand for the TVA’s coal reserves, much of it buried under family farms, has never been greater. The federal government has leased its mineral rights to private coal companies, which have tapped the supply over the past decade largely for export to Europe and Asia. The leases are helping Foresight Energy and its majority owner Murray Energy make big profits even as the coal industry nationwide is flailing.

For every ton of TVA-owned coal sold from the Sugar Camp mine in Southern Illinois, owned by a subsidiary of Foresight, the TVA gets 5 percent of the price and Foresight Energy gets the rest. For comparison, royalties that companies pay on federally-owned coal in the West are set at 8 percent and 12.5 percent for underground and surface mines, respectively.

For years elected officials and energy experts have decried Western coal leases as a bad deal for the public, and President Obama’s administration made reforms. But the leasing of TVA-owned coal in Illinois has received little attention or scrutiny while the companies mining it appear to be making a bigger profit, and the public getting a smaller slice, than out West.

Deeds obtained under a Freedom of Information Act (FOIA) request show how in the 1960s to 1980s, TVA bought and traded mineral rights from Exxon, Arch Coal, Eads Coal and other companies in Illinois. The TVA also signed deals with hundreds of farmers in which the individuals sold their mineral rights, and also promised to sell their land if it was needed for mining.

Many of those farmers or their descendants now regret those deals, saying they never imagined the situation would play out as it has: with private companies profiting handsomely off the coal and using a destructive form of mining that was not common at the time they signed.

On July 1, 2002, TVA coal under 58,235 acres in Franklin, Hamilton and Jefferson counties was leased to the company Illinois Fuel, owned by Kentucky coal executive Stephen Addington, at a rate of $5 an acre, plus royalties of 5 percent on coal sold.

Illinois Fuel didn’t pay what it owed TVA and defaulted on the lease. In 2009, the lease was transferred to Ruger Coal, a subsidiary of billionaire Chris Cline’s company Foresight Reserves. Ruger agreed to pay $1.3 million in outstanding royalties from Illinois Fuel, and assumed the TVA lease, which can be extended for the life of the mine. Cline incorporated the TVA coal into his Sugar Camp mine, Foresight’s most productive operation.

During a March 7 earnings call, Foresight executives noted that the company’s sales and revenue were up significantly for calendar year 2017, with 21.4 million tons of coal sold, and pre-tax earnings of $294 million. Twenty-seven percent of sales were exports, and officials attributed a rosy outlook largely to the export market including Europe, Turkey, India and Egypt.

Even as coal-fired generation has plummeted nationwide, coal from the Illinois Basin is still lucrative and in-demand. It has higher energy content and more bang for the buck than cleaner-burning Western coal. It is much cheaper and easier to extract than Appalachian coal. And its high-sulfur content isn’t an issue for power plants that have been upgraded or built with pollution control equipment.

The original lease of TVA coal to Illinois Fuel was awarded through an auction to the highest bidder. Especially given Illinois coal’s high prices and favorable outlook at the time, some question whether the lease should have been put back up for auction after Illinois Fuel defaulted, and whether the fact that it was not represents favorable treatment for Cline.

A representative for Foresight Energy and Murray Energy declined to comment for this story.

On July 15, 2002, Cline had also signed a separate smaller lease with TVA on behalf of Ruger, covering 6,452 acres of coal seams in Franklin County. Both leases give the company the power to force owners of surface land above the coal to sell their land if the company says it’s needed for mining. That provision was part of the agreement that farmers signed with TVA in the 1970s, an agreement that seemed like a windfall at the time but has caused much stress and heartache since.

A legal challenge, a quiet deal?

The arrangement with TVA became more favorable for Foresight following a lawsuit settlement earlier this decade.

In other words, if TVA paid Foresight what the company claimed was promised, the government utility would be paying almost double the price of coal on the open market.

Foresight alleged that TVA officials promised to buy the coal for its Widows Creek power plant in Alabama, but then backed out when they didn’t need the coal. Widows Creek closed in 2015.

TVA said there had never been a deal, and no contract was produced during the legal proceedings.

TVA and Sugar Camp ultimately settled the matter with a sealed agreement, and in May 2012 the lawsuit was dismissed.

Meanwhile in April and August 2012, amendments were made to the “production royalty” sections of Sugar Camp’s lease with TVA. The April amendment excused Foresight from royalty payments until some date in the future; and the August amendment reduced royalty payments on newer parts of the operation. The specifics of the timeline and the reduced royalty rate were redacted in copies of the amendments obtained under a FOIA, as well as in copies filed with the Securities and Exchange Commission.

TVA officials said the April amendment was related to the lawsuit settlement, and the August amendment was not. TVA said it could not comment on the details of the sealed settlement.

Illinois: Worse than the West?

Coal companies like Arch Coal, Alpha Natural Resources and Peabody lease coal on Western BLM land and pay royalties to the government on their sales, with half the royalties going to the state and half to federal coffers.

In addition to the royalty rate of 8 percent for underground and 12.5 percent for strip mines, companies typically pay a “bonus bid” per ton of coal on BLM lands, often ranging from 11 cents to a dollar per ton.

Companies are supposed to bid on the coal in competitive auctions. But as critics including the Government Accountability Office, Congressmen and mining experts have pointed out, coal companies have been allowed to design the tracts for lease so that they rarely compete with each other and they can acquire the leases at rates critics consider far below true market value.

The Obama administration initiated reforms to the BLM leasing system and tried to secure more money for the public. But the Trump administration has rolled back those reforms, including by suspending a rule change that would have increased royalty payments by basing the royalties on the ultimate buyer of the coal — in many cases overseas clients — rather than cheaper interim sales to pass-through U.S. companies.

Mark Squillace, a professor and former director of the Natural Resources Law Center at the University of Colorado Boulder, has long advocated for revamping the leasing system.

“Given the amount of coal the federal government controls, I’ve always said the federal government has the responsibility for accountable management, and they’ve never taken on that responsibility,” he said. “If they were to do so, at a minimum they would prioritize leasing in the places where they could get the highest dollar amount, and de-prioritize areas where there would be more significant environmental impacts.”

But the federal government has resisted making what would seem like common sense changes to the leasing system, he and other critics say. “They seem to be captured to some extent by the industry,” Squillace said.

As much attention as the BLM leases have gotten for being too favorable to companies, the royalty rates Sugar Camp pays the government in Illinois are generally lower, and don’t include the per-ton “bonus bid.” Also none of the Illinois royalties go to the state government, as in the West.

Profit margins on Western coal are currently razor thin, with the cost of producing Powder River Basin coal pegged at about $12 per ton, about the same as the coal sales price.

Foresight’s production costs meanwhile were $22.80 per ton — the lowest in the Eastern U.S. — said company president Robert Moore during a second-quarter 2017 earnings call. This would seem to indicate a potentially much greater profit margin for Foresight than for Western coal, even at the relatively low current Illinois Basin market price of $33.20 per ton.

In response to a FOIA request, TVA listed monthly tons produced under Foresight’s lease from July 2011 to February 2017 — a total of 11,357,244 tons. The royalties paid were redacted.

Based on the monthly spot market prices for Illinois Basin coal during that time, Sugar Camp would have earned about $472.3 million on TVA coal, and the TVA would have collected royalties of $23 million. Since Foresight may have been selling through more lucrative long-term contracts, their revenue and the royalties may have been higher.

No reform in sight

As part of a company restructuring in early 2017, Murray Energy obtained 80 percent ownership of Foresight.

During the 2016 presidential campaign, Robert Murray was an outspoken and bombastic supporter of Donald Trump. After Trump’s victory, Murray swiftly drafted a list of recommendations for the president including that he eliminate the Department of Energy.  Murray also called for criminal charges to be filed against Obama for “destroying” the coal industry.

While Chris Cline has kept a lower profile politically than Murray, he donated $1 million to Trump’s inaugural committee, and he has donated at least $644,000 to other federal candidates over the years, according to the website Opensecrets.org.

Cline’s shrewd bet on buying up high-sulfur Illinois coal helped make such donations possible. Foresight Energy, which includes four Illinois mines, went public in 2014 and Cline sold a $1.4 billion stake. His own net worth is listed by Forbes as $1.97 billion.

Given Trump’s pledges of support for “beautiful” coal, there’s been speculation what his presidency means for TVA and its coal reserves and power plants.

The TVA is overseen by a nine-person board with members appointed by the president and confirmed by the Senate. In November, the Senate confirmed Trump’s nominees to fill four of five vacant seats; three of the seats had been vacant since the Senate failed to confirm Obama’s nominees.

One of the new board members is Kenneth Allen, who had a 50-year career in the coal industry, most recently as an executive of Armstrong Coal, which sold coal to the TVA. During confirmation hearings the nominees were asked about the role of coal in TVA’s future. They all said the TVA should continue shifting to a more diverse mix of power sources, including renewables and nuclear.

“At a bare minimum, the federal government has a legal obligation to ensure that it is not giving away federal coal— our coal—at fire sale prices.”

This series was produced with support from the Fund for Investigative Journalism.

2 thoughts on “Why King Coal wants to dig up family farms in Illinois: it’s a sweet deal”