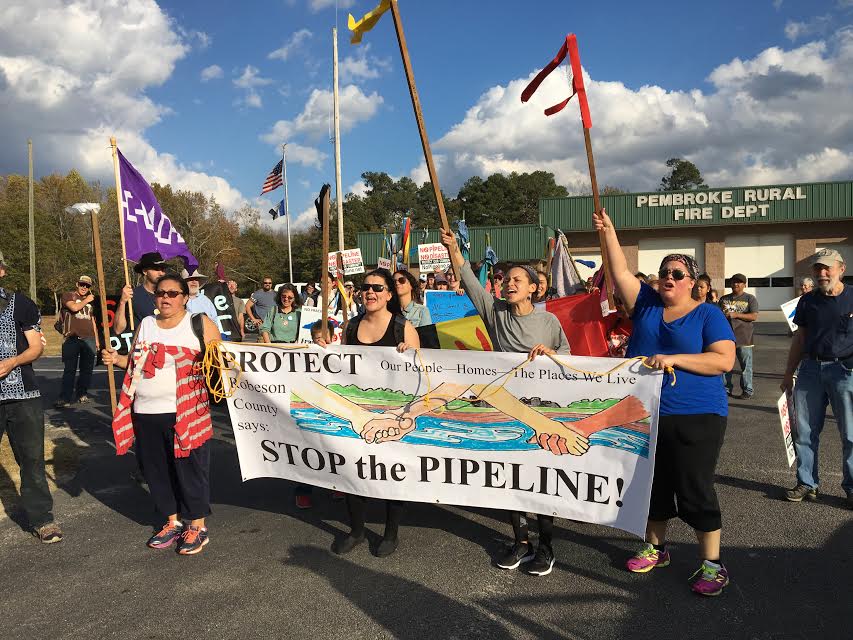 Left out of the formal permitting process, North Carolina’s Lumbee Tribe and others seek a voice before pipeline construction crosses their land and waters.

American Indian tribes in the path of the Atlantic Coast Pipeline are making an eleventh-hour plea to stop construction until regulators can ensure ancient artifacts and their ancestral lands won’t be damaged.

The largest tribe east of the Mississippi, the Lumbee Tribe of North Carolina has rarely weighed in on environmental permits. But its recent resolution, along with one from the state’s Commission of Indian Affairs, reflects growing concern among tribes that the pipeline could destroy swamps and forests that have long sustained their culture.

With nearly all the required permits in hand, the project’s developers have already begun felling trees along a 600-mile corridor from West Virginia to North Carolina’s Robeson County.

Pipeline foes have mounted an array of legal challenges, and this week showcase the plight of the Lumbee in a new documentary, Robeson Rises. And though backers of the resolutions doubt they can derail the project altogether, they hope at least some of their concerns can be addressed before it’s too late.

“We don’t have the power to stop it — because it’s a big train and it’s rolling pretty hard and fast politically,” said Jan Lowery, a representative on the Lumbee Tribal Council and sponsor the tribe’s resolution. “But we think we can slow it down to be heard.”

American Indians comprise just over 1 percent of North Carolina residents, but they make up 13 percent of those living within a mile of the gas pipeline’s route. In Robeson County, where the Lumbee Tribe is concentrated, indigenous people are the largest ethnic group, accounting for more than 40 percent of the population.

The pipeline will cross more than 300 rivers and streams, including the Meherrin River, Coharie Creek, and tributaries to the Lumber River — all waterways that correspond to the names of area tribes. The project’s 100-foot wide construction berth will disturb more than 450 acres of wetlands that house scores of unmarked graves of tribal forbearers.

Despite these potential impacts — and the three years pipeline developers spent preparing for the project — tribal officials were slow to pass their resolutions. One reason: early disagreement among tribal elders, some of whom viewed environmental concerns as secondary to the need for economic development in an impoverished region.

Tribal member Greg Cummings, the mayor of Pembroke and a long-time economic developer, called pipelines “environmentally sound,” and said an additional one could recruit industry to the region, which has lost thousands of manufacturing jobs in recent decades. “Natural gas plays a major, major role,” he said.

Donna Chavis, a Lumbee and anti-pipeline organizer from Robeson, said people like Cummings “were much more outspoken than those who had the questions. That got a lot of early play.” Though Cummings wasn’t on the 21-member Lumbee Tribal Council, she said, “he’s Lumbee and he’s a big business leader. His voice was significant.”

But as the scope of the pipeline’s impact became clearer, some supporters began to reconsider.

“We felt like we needed consultation,”  said Al Locklear, a member of the Lumbee Tribal Council, sharing what he viewed as shoddy construction on an existing, smaller pipeline in Robeson County. Locklear remains a vocal advocate for the pipeline, but he wants more say over the construction process. “We’ve seen what the other pipeline folks did, and quite frankly, and it’s pretty much a soggy bottom mess,” he said.

Seeking a voice in the process

With increasing backing from leaders, and under mounting pressure from constituents, last spring the Lumbee, the Coharie, the Haliwa-Saponi, and the North Carolina Commission of Indian Affairs all penned letters asking for formal dealings between tribes and federal officials.

But they were largely rebuffed. Despite long ties to the area’s land and waters, the region’s tribes lack full recognition from the federal government, leaving them with no official territory and uncertain legal footing on permitting matters.

Federal regulators engaged only the U.S.-recognized Eastern Band of Cherokee — located in the Blue Ridge Mountains some 300 miles from the pipeline’s route. In an impact statement issued over the summer, they assigned outreach to state-recognized tribes to the pipeline’s developers.

“There have been scores of small-group meetings with officials and stakeholders in the area,” said Tammie McGee, a spokeswoman for Duke Energy, a chief investor of the pipeline along with Dominion Resources.

The tribes say these meetings don’t qualify as true “consultation.” The term is ill-defined, admitted Ryan Emanuel, a non-voting member of the Indian affairs commission. But a discussion between developers and tribal government in the absence of regulators clearly doesn’t qualify.

“I saw this first hand when I went to meetings last year between the developer and the tribes,” he said. “The developers, if left to their own devices, all they’re really there for is to give a sales pitch and to dismiss concerns that people have about their project.”

The new resolutions bring these concerns to the forefront once more.

“We buried our ancestors in the forest and in what are now riparian corridors… the last relatively undeveloped places in eastern North Carolina,” said Emanuel, a Lumbee and professor at North Carolina State University. “How are the human remains of my ancestors…going to be treated if they are encountered?”

The tribes’ latest statements also detail how the pipeline could disturb culturally important waterways and vegetation.

“A lot of American Indians still rely on the earth for medicine,” said Lowery, the Lumbee resolution sponsor, remembering her grandmother’s use of sassafras and other types of tree bark. “We’re tearing down all these White Oak trees. What is that going to mean for people that live in that area?”

To answer questions like these, tribal communities are demanding a “full and meaningful government-to-government consultation with all Indian nations, including the Lumbee, that attach cultural or religious concerns” to the pipeline. Until this consultation happens, the Lumbee resolution says, all the project’s remaining permit applications should be denied or suspended.

The Commission of Indian Affairs resolution, adopted but still in draft form, goes a step further, naming Gov. Roy Cooper as well as the federal agency that oversees pipelines and calling for state permits already granted to be rescinded. 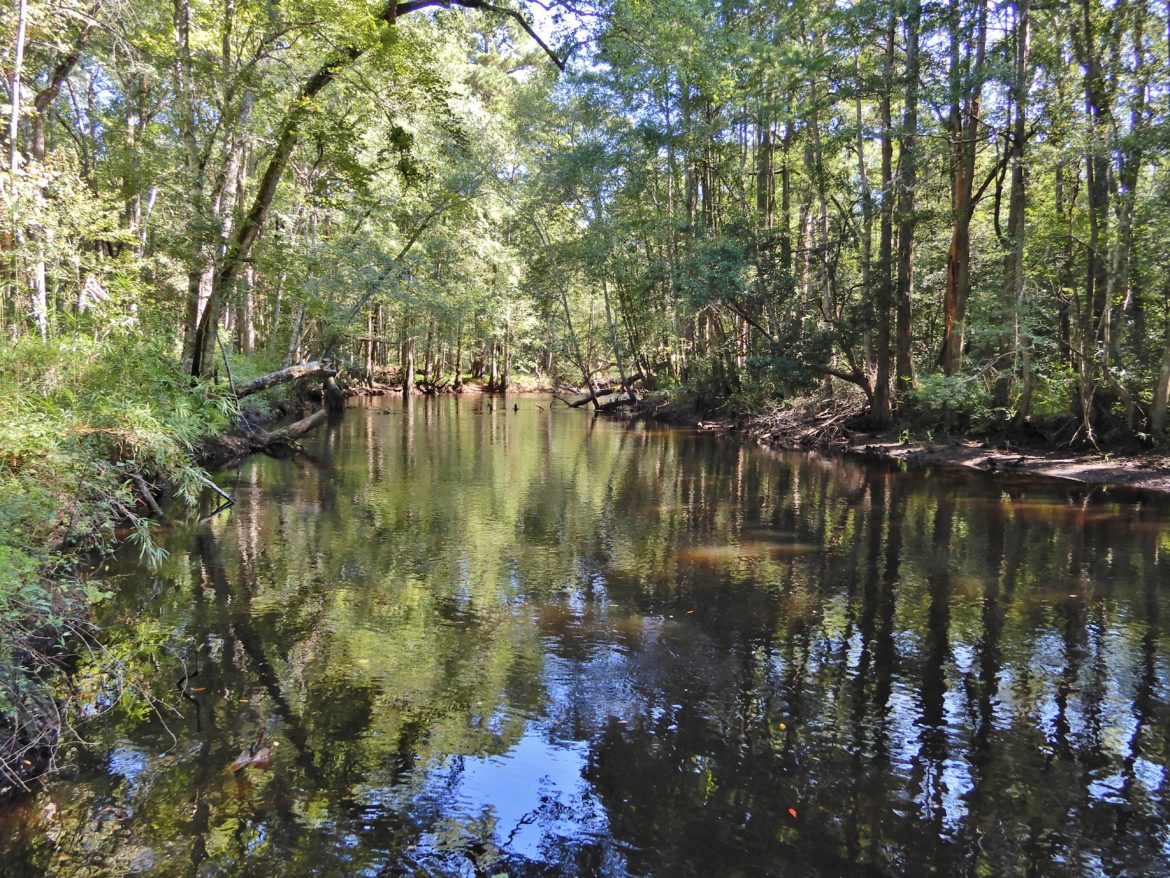 The Lumber River in Robeson County, N.C. is a source of sustenance and tradition for the Lumbee Tribe.

In both cases, questions about the merits of the pipeline were secondary to concerns that tribes didn’t have a chance to make specific demands about how it would be constructed. That’s in part why the Lumbee resolution passed unanimously.

“They’re really interested in the process, a fair and engaged process,” said Emanuel. “You have different political leanings and different thoughts on economic development, but everybody is on the same page when it comes to indigenous rights.”

Pipeline opponents say it was important for the tribes to go on record, no matter their timing. “Even though some might say it’s the twelfth hour,” said Chavis, the Lumbee resolution is “the response of a governing body to its citizens.”

The tribes’ goal is for pipeline developers to better protect waterways, medicinal plants, and artifacts as construction proceeds. They also want training for local fire departments and EMT’s in the event of a gas line explosion.

“Those are the types of things that we as Indian people are concerned about that we’ve never had a chance to voice,” said Lowery. “And that’s what we want: a voice.”

With their resolution’s passage, the Lumbee have joined with the Haliwa-Saponi on a formal petition to the federal agency that regulates the pipeline, asking it to rehear the project’s case with more deliberation of tribal considerations.

Tamara Young-Allen, a spokeswoman for the agency, didn’t know when it might act on the petition, and couldn’t comment on specifics of a “pending matter.” But, she said, “I’m sure the commission’s order on rehearing will address those concerns.”

Still, the agency has a bad reputation when it comes to consulting even federal-designated tribes, according to Emanuel. It’s also widely seen as a “rubber-stamp” for pipeline projects, having rejected only two applications submitted in the last 30 years.

The odds the Cooper administration will rescind the project’s clean water permits also seem long. The state has historically denied a miniscule fraction of permit applications it has received, and officials doubted a denial of the permit would have withstood a court challenge.

“I wouldn’t be celebrating it if I didn’t think it would make a difference,” she said of the Lumbee measure.

No matter what, she said the resolutions marks a turning point in the tribes’ self-determination and their treatment of future proposals that might impact the environment.

“Taking the total picture and not just the promise of jobs in a very poor area is a huge development,” she said. “It’s a new day for any other types of infrastructure coming down the road.”

Read the resolution by the Lumbee Tribe of North Carolina:

Read the resolution by the North Carolina Commission of Indian Affairs: