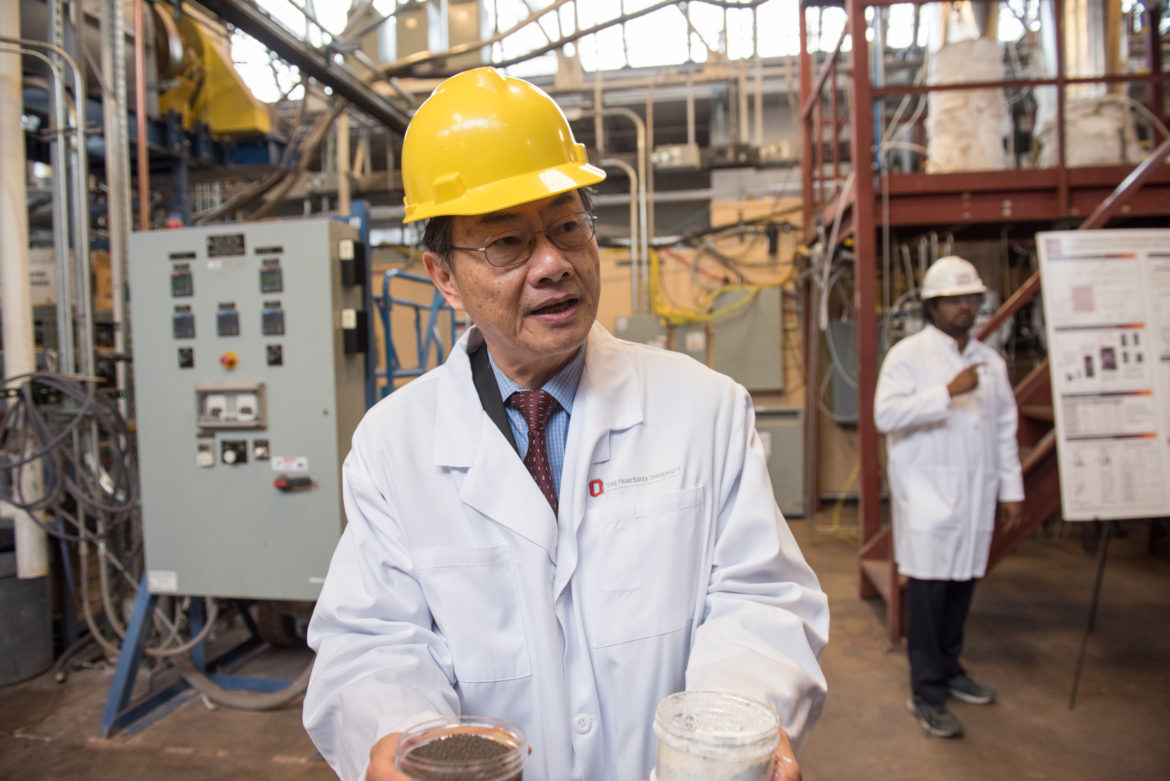 L.S. Fan, professor in chemical and biomolecular engineering at The Ohio State University, holds samples of materials developed in his laboratory that enable clean energy technologies.

A promising technology under development at The Ohio State University converts fossil fuels into electricity without emitting carbon dioxide into the atmosphere. If the method makes it out of the lab and into the real world, it could represent a breakthrough for “clean coal.”

The process — known as coal-direct chemical looping — is “the most advanced and cost-effective approach to carbon capture we have reviewed to date,” said David Kraft, a fellow with Babcock & Wilcox, a power company that’s partnered with the university. “CDCL has potential to transform the power and petrochemical industries.”

The project’s lead researcher touts it as a potential bridge technology for the next few decades until renewables are more widely available, but as the cost of wind, solar and storage continue to plummet, critics say the economic case for chemical looping is already unclear.

What is chemical looping?

In chemical looping, metal oxide particles pass through high-pressure reactors to “burn” fossil fuels without the presence of oxygen. The reaction releases heat for steam production, which can be sent to a turbine for electricity generation. The captured C02 can be used for nanofibers or chemicals such as acetic acid or methanol. Another outcome is synthesis gas, or “syngas,” which serves as the foundation for products including ammonia, plastics and carbon fibers.

Ohio State’s Clean Coal Research Laboratory successfully tested the process for the first time about five years ago, when it produced heat from coal while capturing 99 percent of carbon emissions for 203 hours.

Since then, the team has been working to extend the length of time before the metal oxide particles are worn out. Initially, the particles would last 100 cycles, or eight days of continuous operation. In its latest tests, the particles last approximately 3,000 cycles or eight months.

The process works with coal, biomass, and shale gas, which has been converted into methanol and gasoline using the technique.

What’s intriguing about the technology?

“Renewables are the future,” said Liang-Shih Fan, a professor of chemical and biomolecular engineering, who leads the effort. “This technology could be used for 30 or 40 years, and when a renewable system is ready, it can be used as a primary energy producer or carrier.”

George Huber, a chemical engineering professor at the University of Wisconsin, said chemical looping could eventually be a key component in a regional transition to cleaner energy, particularly when tied to a commodity business like the fuels industry.

“You’re giving yourself an advantage in converting fossil fuel resources because chemical looping doesn’t have an air gasification process,” said Huber. “For combustion technologies it can be used to produce a pure CO2 stream which is easier to capture than CO2 from normal flue gas technologies. It’s a way to more efficiently use fossil fuels and biomass resources.”

Syngas is the technology’s likeliest near-term application, as it’s used as fuel in electricity-generating internal combustion engines. Direct combustion of syngas also powers steam boilers, cement kilns and other industrial equipment, and is the center point in production of various chemicals and plastics.

“You can make ammonia for fertilizers, or take syngas and make liquid fuel, too,”  Huber said. “With chemical looping, there are a lot of great concepts and different types of products. It’s a promising technology.”

Cleaning up coal is a tempting prospect as renewable energy continues to develop, said Satya Chauhan, a senior program director with Battelle Research, a nonprofit science organization based in Columbus. Scientists have studied the concept for decades in attempts to separate greenhouse gases during the fuel combustion process.

“We can’t depend 100 percent on renewables, but having fossil fuels as [a carbon-free option] is something we need to try and do,” Chauhan said.

Despite coal’s domestic decline, the fuel was still responsible for 29 percent of the world’s energy demand in 2016, according to a paper published by OSU last year, and since 2000, most new access to energy globally has derived from coal and other fossil fuels.

In era of cheap renewables, do we need ‘clean coal’?

In many states, wind, solar and other renewables are already proving to be less expensive than coal, and they’re closing the gap with natural gas. The median bid for wind in Colorado is lower than the operating cost of existing coal plants. In Michigan, renewables are coming in at half the cost of power from a conventional coal plant.

Chemical looping could help minimize emissions at gas-fired plants, but even if the process proves itself on a commercial scale, it still faces stiff economic competition from wind and solar, said David Hawkins, climate program director at the National Resources Defense Council.

“No new coal power plants are being built in the U.S., because they can’t compete,” Hawkins said. “New natural gas plants are still getting built, but they’re in markets where the price of wind and solar contracts are cheap.”

The technology’s best application might be for reducing carbon emissions from steel production and other industrial processes, Hawkins said, but even then it will encounter competition from tested systems such as chemical towers that strip C02 emissions and send them by pipeline into secure geological formations.

While renewables are already competitive in many places, Fan thinks chemical looping’s “fuel flexibility” gives it a powerful advantage, as it can process natural gas and biomass and generate a variety of products besides electricity. The technology could also get a boost from recent federal carbon capture and sequestration credits.

What’s next for chemical looping?

The Ohio State University lab is partnering with The Linde Group, a Munich syngas supplier, on ways to use chemical looping to decarbonize the company’s future hydrogen production plants. Chemical looping is also the basis of a partnership with Babcock & Wilcox to deliver electricity production from coal with nearly zero carbon emissions.

One thought on “Ohio State coal tech captures CO2, but can it compete with renewables?”