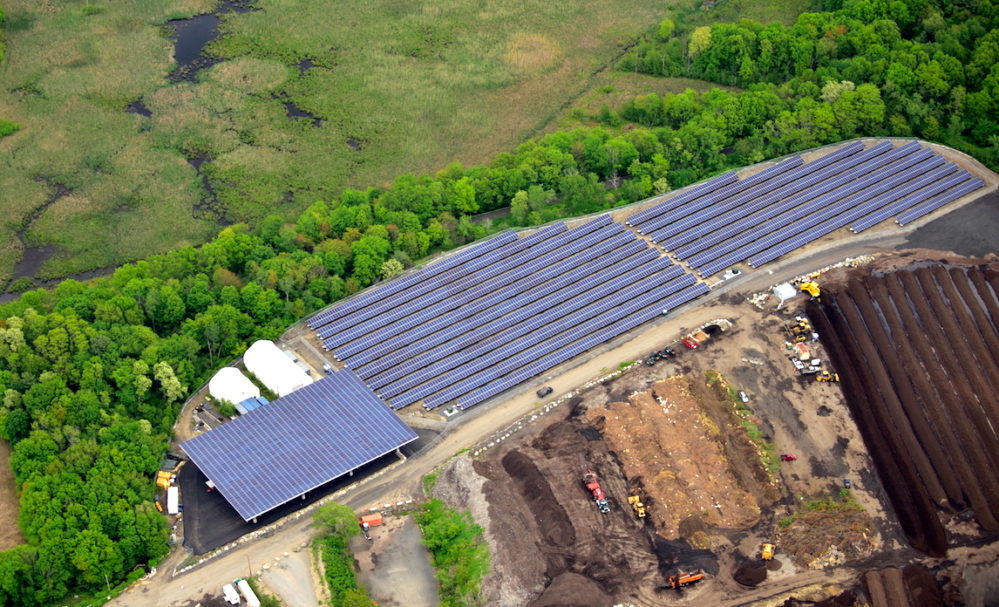 A solar array at a landfill in Lexington, Massachusetts.

A 2.2-megawatt solar array on a shuttered municipal solid waste landfill in Lexington, Massachusetts, is not particularly remarkable on its own.

But this, combined with 100 or so other similar brownfield projects in Massachusetts, make the state a national leader in converting formerly contaminated sites to clean energy production.

Though a few sites feature wind turbines, photovoltaic panels dominate. And advocates credit the state’s clean energy policies as well as the abundance of suitable sites.

Massachusetts accounts for roughly 40 percent of the 253 renewable energy installations identified thus far by the U.S. Environmental Protection Agency’s RE-Powering America’s Land Initiative — or at least 258 of the 1,398 total megawatts brought online through October. The agency’s data base stretches back to 1997.

Elsewhere in the Northeast, Pennsylvania has six projects generating 178.5 MW; New Jersey has 20 projects at 120 MW; and New York has  21 projects totaling 91 MW.

While the Northeast is home to only about 7 percent of the country’s landfills, the region is a hot spot for brownfield conversions

“Financial incentives and the regulatory environment have to be there to make solar happen,” solar developer Michael Singer tells Northeast Energy News. “And Massachusetts has had a robust solar program.”

Singer, a principal with Wellesley, Massachusetts-based Renova Partners, coordinated with its sister company, Brightfields Development LLC, to complete the complex, two-part Lexington project on about 5 acres last May. A traditional solar array generates 1.4 MW, while the remaining 0.8 MW is mounted on a pair of 30,000-square foot solar canopies. Those high-off-the-ground canopies allow the town to continue composting, storing emergency equipment and collecting regional hazardous materials at the site

Traditionally, most towns in Massachusetts had their own landfills. Installing solar on closed ones is usually an easy sell because renewables can generate money for the town and they don’t trigger local opposition because they are treeless open spaces, Singer says.

“Put those factors together and you have non-controversial projects that can be extremely financially beneficial,” he continues.

The Lexington project will generate 30 percent of the town’s electricity and savings on property taxes and energy will put $350,000 into the town’s coffers annually. Installation costs are folded into the long-term solar power purchase agreement the town signed with a private equity firm that specializes in renewables.

“The state had made it very clear that they are quite interested in people developing on brownfields and landfills,” says Sandeen, who leads both the volunteer committee and the board at the non-profit MassSolar. “Under Gov. (Deval) Patrick, the administration was sending a very strong signal that we will help you in whatever way we can.”

The entire 2.2 MW system is essentially a “virtual net metering project that allows you to spread out the flow of electricity” sold into the Eversource grid, Singer says.

Unlike some other states, Massachusetts allows for an unlimited amount of meters to be included in landfill projects as long as they are part of the municipal load. So, they could include streetlights, schools, town offices, hockey rinks and firehouses, but not individual homes.

“The larger the system, the more load we are offsetting and the cost per megawatt goes down,” Singer notes. “You are offsetting load like it is a behind-the-meter system.”

While the soon-to-launch Solar Massachusetts Renewable Target incentive program (SMART) has been much debated among advocates, Singer predicts that it, too will continue to give the state an edge in the adaptable use of solar.

“It’s geared toward making brownfields, canopies, community solar and other pre-developed and smaller sites more mainstream,” he says about SMART. “Brightfields was an early adopter. As an industry, we need this new program to facilitate more solar.”