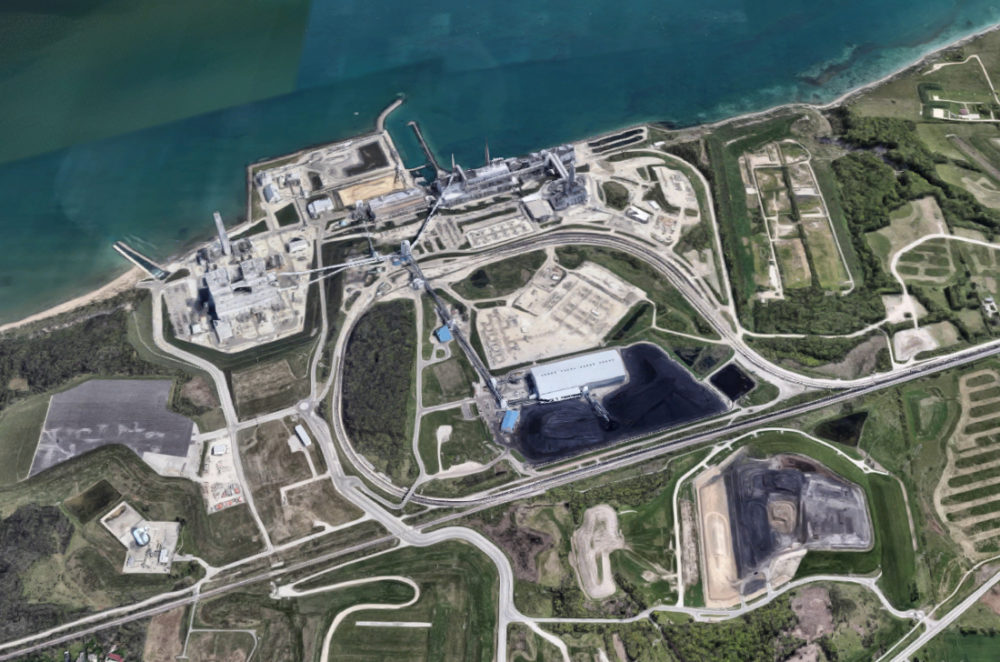 The utility says blowing coal dust from a Southeast Wisconsin power plant is a “rare occurrence” and not part of an ongoing problem.

In the 10 years Michelle Jeske’s sons have played at their local park, she said that never before did they get “a black bottom” from going down the slide.

That changed on March 25, when fine black dust coated the red slide at the park just south of Milwaukee. She and other neighbors say it was the second time in three weeks that large amounts of coal dust blew across the neighborhood from the nearby six-story-high, 15-acre pile of coal waiting to be burned in We Energies’ Oak Creek power plant.

The events are the latest and most extreme examples of a problem that has plagued residents since We Energies erected the coal pile in December 2016 to provide fuel for the controversial expansion of the plant built in 2010. Residents worry the plant will operate even more in coming months since We Energies closed another coal plant in the region.

They report that black dust from the coal pile or coal being transported to the plant regularly accumulates on surfaces in their houses and cars. That’s in addition to the particulate matter and other pollutants emitted from the power plant’s stacks.

We Energies doesn’t deny the dust found in the park March 25 was from their coal pile, but said it was “residual” leftover from the blowing dust earlier that month. Company spokesperson Amy Jahns characterized it as a “rare occurrence” as opposed to part of an ongoing problem.

“No dust was blowing off the piles on Sunday [March 25],” Jahns said. “Our video monitoring confirmed this. The pile has not had machinery on it since Thursday of last week, and is saturated with water from our dust suppression system.”

We Energies has agreed to meet with residents at a meeting called by the local Clean Power Coalition-Southeast Wisconsin on Wednesday, April 4 at 6pm at the Oak Creek Library. Coalition leaders have also asked two other utilities that have ownership stakes in the power plant to attend, WPPI Energy and MG&E, which gets 19 percent of the power to serve its Madison-area territory from the Oak Creek plant.

Coalition leaders said they have not received answers from MG&E or WPPI as to whether they will attend the meeting.

Jeske doesn’t believe We Energies’ statement that the dust on the slide was blown there several weeks ago. That’s in part because her husband’s truck had been washed since the March 5 dust incident, and it was covered in black dust again around the same time as the slide.

“So now I’m thinking: how much of this are we breathing in?” said Jeske, who is especially worried for her sons ages 11, 13, 14 and 15. “Our kids are growing – they run, they’re in football, cross country, playing outside. That makes me feel definitely afraid for them, and they’re still in that phase we’re they’re developing.”

Jeske and other residents said a woman affiliated with We Energies had gone door to door asking if residents wanted their cars and homes washed after the incident in early March.

“I said, ‘Sure but what are you going to do about our kids’ lungs?’” Jeske recounted. “She said, ‘I’ll write that down’…I can’t fathom how it’s legal to have a coal pile this close to the public.”

Greg Millard has a clear view of the coal pile from his yard where he spends much of the day doing metal art work. He is among the residents who want We Energies to buy their homes.

“We’re just not going to win, we just want out,” Millard said. “I don’t want to walk around with a respirator in the yard, that’s not living anymore. It’s unfortunate because it’s a real nice quiet place, we’ve got deer coming in the backyard, coyotes, turkeys, everything. It’s destroying what we had here.”

He said he dug up raspberry bushes he’d planted and gave them to a friend who lives miles away, because he figured it wasn’t safe to eat berries coated in coal dust. He said some residents, especially elderly people, are “afraid to speak out against a multi-billion-dollar company.”

Jahns said the company has no plans to purchase homes in the area.

“We have coexisted with the residents in that subdivision for many decades, and we will continue to work with them to address any concerns,” she said.

Residents hired a company to test the coal dust that covered the neighborhood in early March. Metallurgical engineer Robert Dragen found the elemental composition of that matter “consistent with fine sub-bituminous coal dust.” Meanwhile in a public statement two doctors addressed the risk coal dust can cause.

“Short term and long term inhalation of coal dust, particularly fine coal dust, can cause chronic respiratory issues and increase the likelihood of asthma exacerbation,” said Dr. Michael Ganz, a local asthma and allergy specialist, in the statement. “I’ve seen a number of people who lived in close proximity to the Oak Creek Power Plants who had an increased incidence of chronic respiratory illness.”

For months, residents have been demanding We Energies place an air monitor on the north side of the coal pile, the direction from which dust would blow toward the homes of Millard, Jeske and others. They also asked the company to reposition its air monitor on the south side of the coal pile and to provide air quality information in real time and with an alert system. The company denied the request.

Jahns said that since dust blew off the pile in early March, the company has taken measures including telling “employees to stop working on the coal pile immediately if they are concerned about blowing coal dust [and] monitoring weather conditions more frequently, consistently checking wind speed and direction.” She said the company will also set procedures for dust containment, including wetting down the pile at levels more stringent than their permit requires.

“Whatever they did isn’t working,” said Dana LaFontsee, a leader of the Clean Power Coalition-Southeast Wisconsin. “From a technical standpoint I don’t know what it would take. I know they spray with chemicals and with water. But obviously they need to figure something else out. Long-term whatever they do, it’s not an ultimate solution. What the Clean Power Coalition is pushing for is they need to move towards renewable energy.”