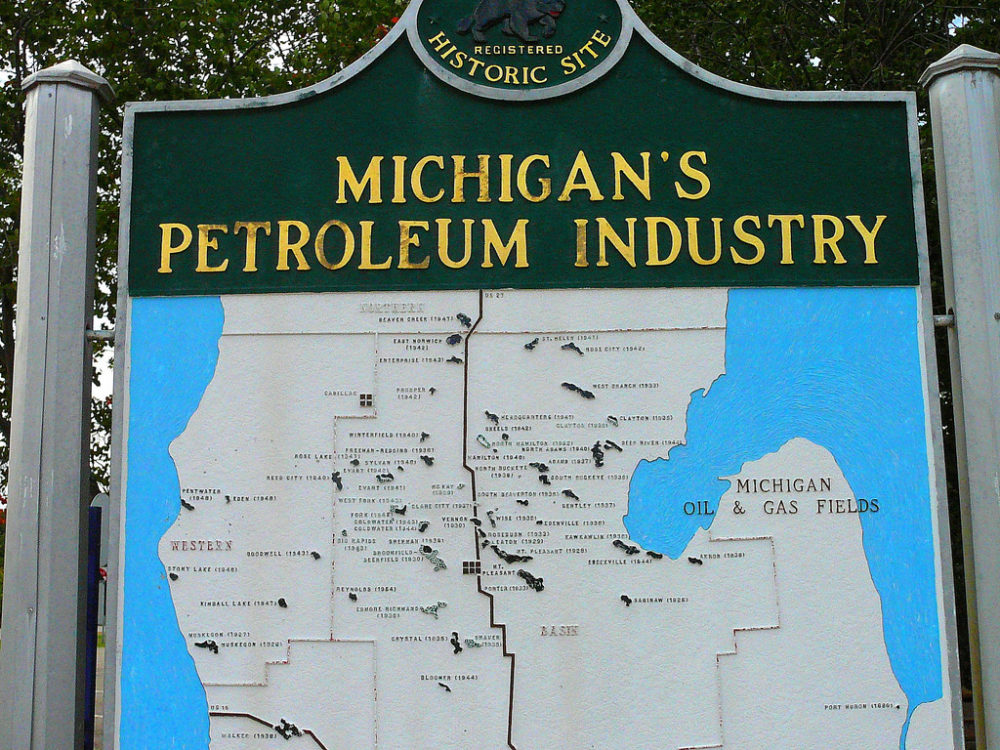 A historic site marks locations of oil and gas fields in Michigan.

The governor’s office for a third consecutive year is asking for $4 million from the state’s general fund to cover the cost of regulating oil and gas.

Michigan officials for the third year in a row are asking for public funding to cover the cost of regulating oil and gas drilling in the state, as revenue from an industry fee continues to fall short.

The state Department of Environmental Quality’s Oil and Gas Program — which reviews drilling permit applications, inspects active wells and oversees permanent sealing of retired ones — is funded by a “surveillance fee” capped at 1 percent of the value of companies’ gross production.

The program has faced a funding shortfall since 2014 when oil prices dropped significantly. After spending down its reserves, the program has depended on $4 million from the state’s general fund each of the past two fiscal years. Gov. Rick Snyder’s administration has requested another $4 million for the fiscal year that ends in September 2019.

Despite a slight rebound in oil prices, oil and gas production has trended downward, shrinking hopes that revenue might rebound. Even as production declines, the program’s workload has stayed roughly the same, with fewer new permit applications but more abandoned wells in need of capping.

State lawmakers expressed reluctance to increasing the fee, which could further discourage production, which means it’s likely the state will continue to cover program costs with money from the state’s general fund.

“Clearly we’re subsidizing the oil and gas industry in a way that, in our mind, doesn’t make any sense,” said James Clift, policy director of the Michigan Environmental Council.

The Oil and Gas Program oversees 20,000 active wells, issues roughly 80 new drilling permits annually and responds to about 100 spills a year at sites, according to DEQ testimony last month in a House Appropriations subcommittee.

Before 2014, the program was funded nearly entirely by surveillance fees, which drop from $11.8 million to $3.6 million between fiscal years 2014 and 2016. A little more than half of its $8.7 million budget came from surveillance fees this fiscal year, and it also receives revenue from other fees and interest.

On top of declining prices, production of oil, gas and natural gas liquids have all been trending down since 2014. Michigan produced 5.4 million barrels of oil last year, a 26 percent decline since 2014. Natural gas production is down 17 percent during that time.

“This is basically a structural problem,” Clift said. “That funding level is probably never going to come back to what is was.”

Clift added that the state has most likely passed its peak of oil and gas production and that oil and gas prices aren’t likely to significantly increase in the coming years. He said the 1 percent fee would most likely need to be increased so “we have a credible oversight program.”

Hal Fitch, director of the DEQ’s Oil, Gas and Minerals Division, said about half of the program’s funding source disappeared with the drop in oil prices. Funding has only “improved marginally” in the past year or two.

While Fitch said there is “some increased interest” in drilling since prices have started to rebound, “It’s probably not enough to turn those long-term trends around at least in the next few years.”

The $4 million from the General Fund is “at least a partial solution for the upcoming few years at least,” Fitch said. “Beyond that, it’s kind of hard to project what might happen. Other than that, nobody’s come up with some other alternatives.”

With budget cutbacks in the past few years, the program has not filled vacant positions, Fitch said. While the program is not processing as many new permits as it was a few years ago, more wells are being closed. He added that the net workload has “probably been the same, maybe increased a bit.”

State Rep. Mary Whiteford, the Republican chairwoman of the House Appropriations Subcommittee for the DEQ, said she thinks oil and gas prices and production will increase in the coming years. And she pointed out that taxes from the industry are going to the general fund anyway.

“I don’t see it as a public subsidy,” Whiteford said. “I look at it more than a line item (in the budget). You have to look at the total coming from oil and gas.”

Companies also pay a severance tax on oil and gas produced, which is estimated to be about $26 million this year. Two percent of severance tax revenue is directed to a fund that oversees and plugs orphan wells, while the rest goes into the General Fund.

Whiteford said there also hasn’t been interest to increase the cap on the surveillance fee and she “probably would not support” that.

William Harrison, director of the Michigan Geological Repository for Research and Education at Western Michigan University, said historically the General Fund was used to pay for oil and gas oversight. Harrison also believes it should be the responsibility of the state to oversee the industry.

“It would be an unusual situation if the industry paid to have itself regulated,” he said, comparing it to transportation infrastructure and maintenance that’s paid by the public.

“It’s a necessary thing if you’re going to have something that’s done in the interest of the public, it seems the public needs to pay for it,” Harrison said. “Energy is a critical factor to our society to keep moving forward.”

Clift points out that Michigan is a “small player” when it comes to oil and gas production, using far more resources than what is produced in-state.

“When you get into these extractive industries — basically removing one-time resources from Michigan’s natural resources — the fee on those industries should be used to fund the regulation of those industries,” Clift said. “There’s no reason people in Michigan should be subsidizing oil and gas exploration.”

As in other states that debate taxes and fees on oil and gas producers, Harrison said if they’re confronted with higher costs of doing business in Michigan, “They’ll just go away.”

“That’s the bottom line: These companies are just like every business,” he said. “They need financial structure. If that changes significantly, it could drive the

The proposal to give the program another $4 million from the general fund passed the House Appropriations subcommittee in March. The full House will likely vote on an omnibus spending bill within the next couple of months.