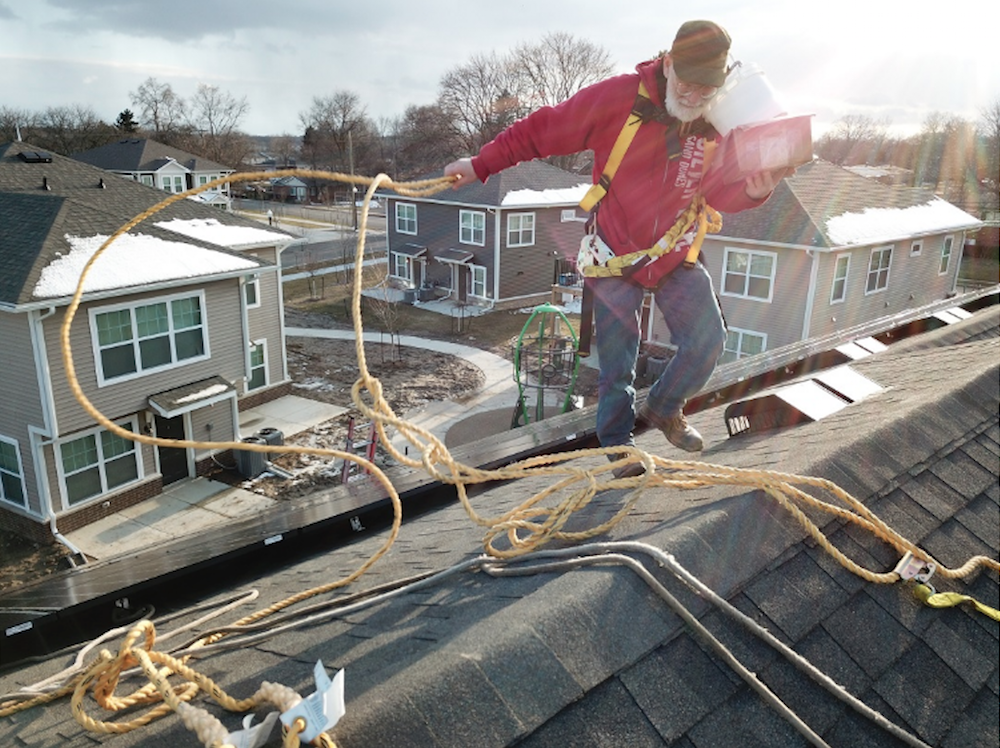 Dave Strenski has become known as "the solar guy” in Ypsilanti, Michigan.

A volunteer-driven effort to install solar in the middle-class town of 20,000 people has caught the attention of Google and the U.S. Department of Energy.

His day job is as an applications analyst for Cray, the legendary maker of supercomputers. Cray built what was then the fastest computer in the world in 2009, housed at the Department of Energy’s Oak Ridge National Lab.

Strenski got into solar power early, just like he got into computers.

He sees the same trend with solar.

Strenski got into solar when the nonprofit Ypsilanti Food Co-op in his home town of Ypsilanti, Michigan wanted to do something for the environment.

“I’m not a solar installer or distributor, and I’m not an environmental activist,” he said. “I just stumbled across solar power, and I thought it was really cool.”

The co-op was established in 1975 to buy produce directly from farmers, and expanded in 2005 by acquiring the bakery next door. They still specialize in organic and locally grown goods. “We installed these panels because it’s the right thing to do,” said general manager Corinne Sikorski.

To do the first solar installation in Ypsilanti, Strenski helped the co-op win a demonstration grant from the state in 2005. It helped pay for only four solar panels, putting out 800 watts of power, enough for about thirteen 60-watt light bulbs. The cost: a whopping $6,000. “The panels alone back then would cost about $5 a watt,” Strenski said. “They’ve come down dramatically in price.”

The store gradually added panels as prices came down, and now boasts 30 panels on the store and 30 panels on the bakery, providing all of their electricity. With wood-fired ovens and solar power, the bakery now makes “carbon-neutral bread.”

The co-op project was also the birth of Solar Ypsi, an all-volunteer effort to make Ypsilanti a leader in solar power. It made Strenski “the solar guy,” and resulted in a steady stream of requests for help and speaking engagements.

Solar Ypsi has raised over $200,000 in grants and led a local solar revolution. Appropriate for an organization led by a leading edge geek, the SolarYpsi.org website has interactive maps, videos, and real-time data from 72 installations in and around Ypsilanti. Their work spurred the City of Ypsilanti to adopt a resolution in 2013 setting a goal of 1,000 solar roofs by 2020.

While most projects in Ypsilanti are residential, other notable installations include a local fire station, a solar parking canopy for the City of Ypsilanti that supplies City Hall, a health center, schools, and nonprofit groups.

The biggest is an 800 kW project on land owned by the Highland Cemetery, installed by local utility DTE Energy. The cemetery will earn $400,000 over 20 years in lease payments that will help restore historic buildings.

For a middle-class town of only 20,000 inhabitants, the solar numbers have attracted national attention. Strenski calculates that Ypsilanti has 50 watts of solar power per capita. Honolulu, Hawaii, he says, is at 250 watts. “With some new projects in the pipeline we have a fighting chance to get to that number,” he said.

Solar Ypsi’s accomplishments have led to many accolades, including awards and national press coverage. They are one of over 170 teams selected to compete in the U.S. Department of Energy’s Solar In Your Community Challenge, a $5 million contest “to support innovative and replicable community-based solar business models and programs that will bring solar to underserved communities.”

In 2017, they won a SolSmart Gold designation from the Department of Energy, the only city in Michigan and one of only 58 nationwide to win. Just recently, they won a Smart50 award from the Smart Cities Connect Foundation, for their project on the fire station.

The fire station project was especially notable. Solar Ypsi recruited volunteers to provide manual labor, including the Mayor and his son. Like an old-fashioned Amish barn-raising, they installed 176 panels in only seven hours, putting 50 kW on the roof in just a day.

Firefighters helped speed things along by lifting material from the ground to the roof using the bucket on their fire truck. Thanks to free labor, tax credits, discounted materials, and $25,000 from an anonymous donor, the final cost to the city was only $31,000, resulting in a payback of less than five years.

Thanks to volunteers, Strenski says Solar Ypsi has done residential projects for less than $1 per watt, a far cry from the $7.50 it took to do the food co-op project in 2005.

They’ve even been discovered by tech giant Google, who featured Solar Ypsi in a 2011 video promoting its search product.

“There’s a constant stream of negative news about economics and whatever,” Strenski told Google. “It’s nice to inject some positive news coming out of Ypsilanti. It’s motivation to make you want to do something to help out your town.”

Solar Ypsi is using technical assistance provided by the DOE Challenge to work on the next round of projects. The assistance has been especially useful in exploring financial structures that enable nonprofit and public customers to benefit from federal tax credits.

New Park Ridge, an affordable housing complex being built by the Ypsilanti Housing Authority, will feature 20 kW of solar on the community center. The project will hire and train people from the neighborhood to do the installation. Chart House Energy, a financial firm, is lining up investors to take advantage of tax credits and accelerated depreciation. They will lease the system to the Authority for six years, then transfer ownership after the tax credits expired, a move known as a “flip.”

“We’re very excited about the solar project because it will lower operating costs for us, allowing us to serve people better, and provide job opportunities for our residents,” said Zac Fosler, executive director of the Authority. “It’s a really incredible thing to be able to train our low-income residents on installing solar panels and have that be a skill they can take with them and use in the future.”

Solar Ypsi is also helping expand the solar canopy that shelters city-owned vehicles. An anonymous donor paid for 5 kW of solar three years ago, and the city is now adding another 20 kW. When it comes online in April, the expanded system will make the city office building 100 percent solar-powered. The city will make a down payment of $15,000, then six yearly payments of $2000 each – calculated to be 10 percent less than its current electric bill. Like the Housing Authority, they too will partner with Chart House.

The biggest fish on Strenski’s line has been the hardest to land. The city owns a 6.5 acre property just off the highway that is a closed landfill. Since it is undevelopable for buildings, Strenski has been hoping to use it for solar. DTE put out a request for sites in 2012, and Strenski worked with Ypsilanti to pitch the landfill, which won. But DTE later backed out in favor of the Highland Cemetery project.

Now the city and DTE are talking again, considering a 1.5 MW project on the site. Because of recent changes to business tax laws, Chart House may partner with DTE to monetize tax credits. The project could also expand to nearby properties, Strenski said.

Strenski’s energy and optimism is not slowing, and in fact seems to be accelerating as solar becomes more competitive and accepted. He already has plans for the $500,000 grand prize from the DOE Challenge – rebates for solar homes and a group “solarize” campaign to drive down costs.

“Let’s get 1,000 roofs in little old Ypsilanti,” he said, “and let’s put Ypsilanti on the map as a solar destination.”