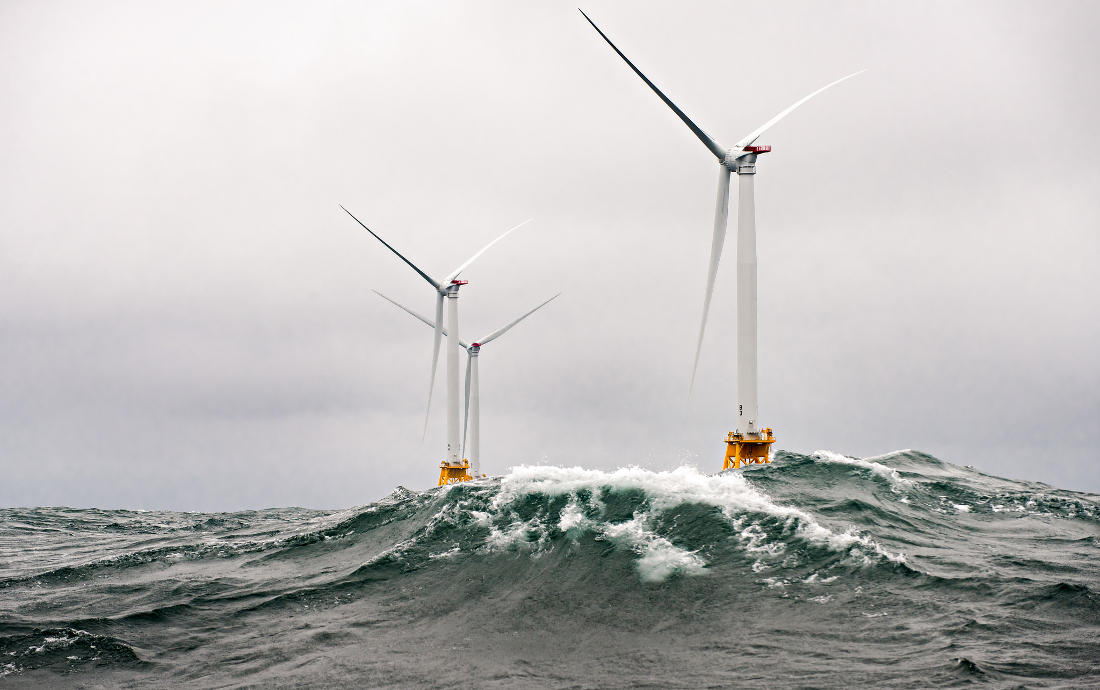 Clean energy advocates say offshore wind is not being taken seriously enough as an option amid discussions of transmission lines and natural gas pipelines.

Coastal Massachusetts is blustery enough that a robust offshore wind system could power a residential and commercial electricity load that is 20 times larger than exists today.

Ben Hellerstein, state director of Environment America which produced the report, says hydropower offers a “comfort factor” to an administration, leading legislators, utilities and big businesses more at ease with an incremental approach to weaning the state of fossil fuels.

“Saying that offshore wind is unproven is an outdated way to think about it,” Hellerstein said in an interview. “Their thinking hasn’t caught up to reality. Both wind and energy storage are advancing very quickly.”

In 2016, Baker signed a bipartisan measure green-lighting the procurement of 9,450,000 megawatt hours of clean energy annually.

Clean energy advocates are elated that the law opened the way for bids on 1,600 MW of offshore wind. But they are disappointed that Baker opted for 100 percent hydropower to fulfill a separate call for 1,200 MW of clean energy.

More local offshore wind, they say, would better mesh with Massachusetts’ ambitious goal to curb greenhouse gas emissions 25 percent below 1990 levels by 2020 and 80 percent by 2050.

“The bottom line is, we have this tremendous clean energy resource right off our coast,” Hellerstein says. “The sooner we tap into it and the bigger the scale means bigger benefits for our environment and our health.”

A second option, the New England Clean Energy Connect, is under permit review now. That 145-mile transmission line would run from the Canadian border to a Lewiston, Maine, substation. Central Maine Power, part of Avangrid, also partnered with Hydro-Quebec on this project.

On the offshore wind front, Deepwater Wind, Vineyard Wind and Bay State Wind have submitted proposals to install the state’s first round of turbines in coastal waters.

Gideon Weissman, a policy analyst with the Frontier Group, sees no reason why Massachusetts shouldn’t drop the hydropower option and fold those megawatts into more offshore wind projects.

Frontier co-authored the report “Wind Power to Spare: The Enormous Energy Potential of Atlantic Offshore Wind” with Environment America in late March. They drew upon calculations from the U.S. Energy Information Administration, the National Renewable Energy Laboratory and the Interior Department’s Bureau of Ocean Energy Management.

Massachusetts stood out in the study because of its combination of relatively shallow waters and high wind speeds.

“It certainly wouldn’t be politically feasible to build in all the state’s coastal places,” Weissman says in an interview. “But states don’t have to get all of the wind from their own waters. They can import wind from other states.”

The overall cost of new offshore wind has fallen by 25 percent in the last five years, according to the asset management firm Lazard. And Bloomberg New Energy Finance predicts those costs will decline an additional 71 percent by 2040.

“Right now, the moment for offshore wind is perfect,” Weissman says. “The technology is proven and advanced and the price has dropped significantly.”

That might be, but the state shows no signs of budging on hydropower—even when critics  question methods used to account for quantifying the emissions of heat-trapping gases.

Katie Gronendyke, a spokeswoman with the Executive Office of Energy and Environmental Affairs, says a balanced approach is crucial to diversifying the state’s energy portfolio.

‘There are plenty of questions about hydropower. It’s not a perfect resource.’

“Large-scale renewable resources like hydropower can play a critical role … by delivering reliable, clean base load generation to meet Massachusetts’ energy demands and greenhouse gas reduction targets,” she wrote in an email.

Boston-based attorney Mark LeBel says the clean energy non-profit Acadia Center where he works “strongly supports going big on offshore wind all across New England,” but recognizes that the appeal of hydropower is its low price.

“There are plenty of questions about hydropower. It’s not a perfect resource,” he says. “Hydro-Quebec has been building out new dams for roughly the last decade with the idea of selling to new customers.”

LeBel emphasizes that the more renewable sources Massachusetts can bring online, the less additional natural gas infrastructure it will need.

Hellerstein and Weissman are aware that connecting offshore wind power to population centers on the mainland will likely cause disputes, but they say those shorter distances make more sense than transmission lines such as the Northern Pass.

Earlier this year, the Federal Energy Regulatory Commission granted permission to a company called Anbaric Development Partners to advance the concept of an offshore transmission network capable of moving up to 2,400 MW of power.

In the meantime, Democratic legislators continue to try to push Massachusetts farther on renewable energy. A bill released in February by the Senate Committee on Global Warming and Climate Change guides the state toward 100 percent locally generated renewable electricity by 2035, with other sectors such as heating and transportation following suit by 2050.

That bill, called the Act to Promote a Clean Energy Future also would accelerate the timeline for the state to develop its first 1,600 MW of offshore wind power and also boost that total to 5,000 MW by 2035. In tandem, it sets an energy storage target of 1,766 MW by 2025.

Hellerstein notes that solar power, long dismissed as a no-go in Massachusetts, flourished once legislation matched the technological advances and possibilities.

“We’ve had a more than 300-fold increase in solar energy since 2007,” he says, adding that the full potential for offshore wind should also be unleashed. “We have the resources, the smarts and the know-how, so what are we waiting for?”