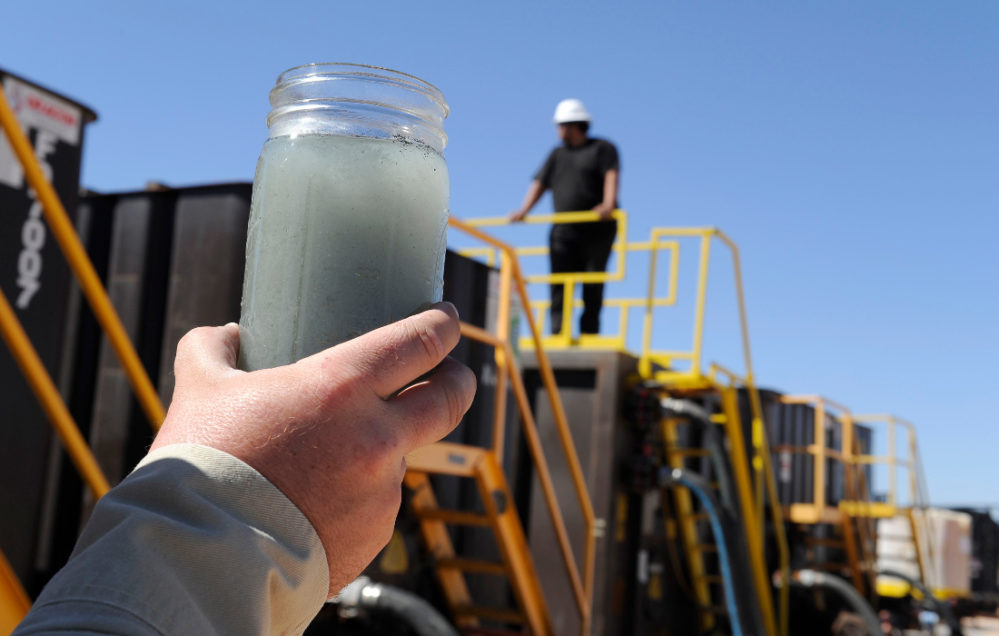 This photo shows a jar holding waste water from hydraulic fracturing at a recycling site in Midland, Texas.

A new treatment method could allow drillers to clean and process wastewater on-site instead of transporting to wells.

On a warm day, Tappan Lake in eastern Ohio attracts boaters, water skiers, and others seeking to enjoy the water and scenery.

It’s not just tourists who drive past on the seven-mile shoreline stretch of U.S. Highway 250. The road is also a main route for tanker trucks carrying contaminated fluids from fracked wells in the region.

Thankfully, there hasn’t been a spill from those trucks along the lake’s shores, but such accidents have happened elsewhere and the risk is real.

“I worry,” says John Hoopingarner, executive director of the local Muskingum Watershed Conservancy District, who is generally pleased with the oil and gas industry’s environmental compliance with leases in the watershed.

Contaminated wastewater from oil and gas wells is the energy sector’s single largest industrial waste stream, with more than 14 billion barrels produced annually. Most of it gets transported by truck to wastewater disposal wells, for which Ohio is a regional hub because of its geology.

It’s a potentially hazardous journey, and one whose costs also add up for the industry. That’s why a team at Ohio University is working on a new way to treat well wastewater where it’s produced.

Chemical engineer Jason Trembly presented the research at the Ohio Shale Policy and Technology Symposium in Dublin, Ohio, on April 5.

Where it comes from and why it’s hazardous

The wastewater is a byproduct of hydraulic fracturing, or fracking. Well developers pump millions of gallons of water, sand and chemicals into deep rock formations to create and prop open cracks so oil and gas can flow out. After initial flowback, fluid continues to come up along with any oil or gas.

The fluid is very salty — up to 30 percent by weight, says Trembly. The material can also contain significant amounts of what he calls “bad actors” — heavy metals, dissolved radioactive materials, and other chemicals.

The salt can kill plants, fish and other organisms. And the heavy metals and radioactive components can be toxic to them as well. Human health might be at risk if contaminated fluids get into drinking water supplies.

What do drilling companies do with the wastewater?

Most contaminated fluids from fracked wells in Ohio go into deep injection wells. Well developers in Pennsylvania and West Virginia also send substantial quantities of the waste into Ohio because those states’ geology is generally not good for deep well injection.

Along the way, crashes and spills can occur. Last November, a tanker truck spilled roughly 1,200 to 1,500 gallons of wastewater into a culvert and ditch between Coolville and Belpre. And in 2016, a spill of fluids from a conventional well caused officials to temporarily halt withdrawals from a reservoir that serves citizens in Barnesville.

Environmental advocates have voiced concerns about the quantities of water used for fracking and then eventually disposed in deep rock formations. Once pumped down, the water sent into those injection wells is effectively removed from the water cycle. Under some conditions, deep well injection of waste from fracked wells has also been linked to earthquakes.

Beyond that, concerns about seismic activity could limit the availability of underground injection wells, he added. That could further raise the industry’s costs or put developers’ operations at risk.

Is there a better alternative to disposal wells?

It’s an expensive hassle for oil and gas companies, too.

The technology developed by Trembly and his colleagues would use portable equipment to remove some problem materials from the fracked well fluids before separating the water from the salts.

The first step pulls out materials such as barium, strontium and some NORM. (That stands for Naturally Occurring Radioactive Materials.) “The most typical radioactive component is Radium-226,” he said. “However, each well is unique so there is a great amount of variability in the components and associated concentrations.”

Depending on the chemical makeup at a particular site, pretreatment could use natural sorbents or softening techniques to draw the “problematic actors” out of solution.

“We’re able to selectively remove, say, barium and radium from the produced water,” Trembly explains. If necessary, another step could remove ions that can cause scaling and fouling of well pipes. Those contaminants often limit reuse of fluid from fracked wells.

The remaining liquid waste then goes into a pressurized reactor. An electric current  heats the remaining fluid to the point where it moves from the liquid phase to a gas. Because of the pressure, the solution boils at temperatures well above 100 degrees Celsius (212 degrees Fahrenheit). Indeed, in the process’s later stages, the temperature climbs above 350 degrees C.

“This allows the system to simultaneously remove salt and hydrocarbons, which would not be possible at atmospheric pressure and simply boiling the water,” Trembly said. Recovered water could be reused — either for more oil and gas wells or possibly even for treatment and discharge from publicly owned wastewater treatment plants.

In theory, the process has “zero liquid discharge capability,” Trembly said. By that he means that solids separated out during the treatment could go to a landfill. Salts could be used on roads or for industry, “because those problematic actors have been removed upfront,” Trembly said.  The recovered water would also be reused, so it would no longer be a waste.

As a practical matter, there would still probably some liquid waste going to injection wells, Trembly said. Yet the amount would be much less. As he sees it, environmental benefits would include a reduced risk of spills and lower diesel engine emissions from trucks, decreased volumes of waste going into injection wells, and reduced water intensity of hydraulic fracturing.

Lab experiments show the process works well. Testing with actual wastewater from the Utica-Point Pleasant Shale removed more than 99 percent of the salt, Trembly said.  The preliminary economic analysis is also promising. The group reported on some of its work in journal articles published last year in Desalination and Energy. The team plans to submit a follow-up journal article next month.

A pilot project to run the process with larger volumes of waste out in the field would be the next step, Trembly said.