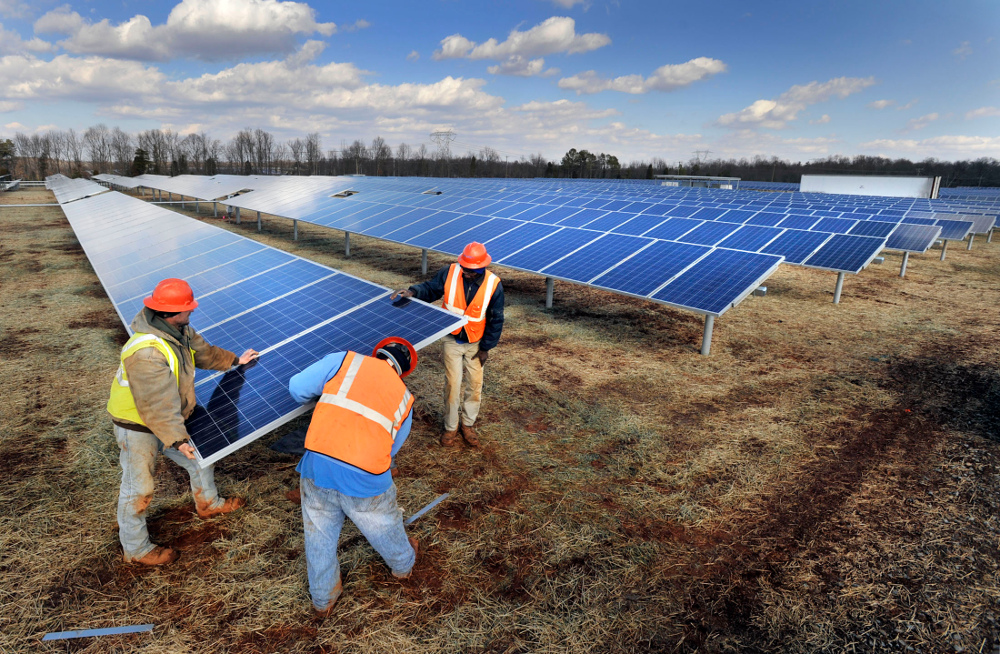 The debate over how North Carolina transitions to a cleaner energy economy took center stage at the annual event in Raleigh.

It’s a time of rapid change in North Carolina’s energy sector, from the state’s rise to No. 2 in the country for solar to the decline of large, centralized coal plants.

North Carolina’s 4 gigawatts of solar capacity comes almost entirely from large solar farms — rows upon rows of ground-mounted panels built in the last six years. The upsurge was due in part to how the state implemented the Public Utility Regulatory Policies Act, a 1978 federal law that requires utilities to contract with small power producers.

Duke long argued that the state’s PURPA rules were too favorable for clean energy, and two years ago began slowing to a trickle connections of large solar arrays to its grid, leaving developers over a barrel.

A sweeping, bipartisan clean energy law adopted last summer, House Bill 589, was supposed to break the logjam. Only the smallest solar farms would be regulated under new PURPA terms. Duke would use the old terms for up to 3.5 gigawatts of projects stuck in its connection queue, and contract for another 2.6 gigawatts of solar under a competitive bidding process not subject to PURPA. The bill promised to double the state’s solar capacity over four years.

But Duke is behind schedule in setting up the new procurement process, and too many projects remain stuck in the connection queue, said conference panelist Karen Kemerait, an attorney for clean energy companies. A representative from Duke brushed off these concerns, but “from the solar developers’ perspective, it continues to be a major issue and problem,” Kemerait said.

2. There are still plenty of loose ends from a sweeping 2017 renewable energy law.

House Bill 589 was also designed to spur a wave of rooftop solar and give universities and other large electricity users new pathways to buy clean energy. But critics at the conference said Duke’s proposed “green source advantage” program falls short, and they worry the law opens the door for Duke Energy to reimburse rooftop solar panel owners less money for the energy they produce.

Ultimately, whether House Bill 589 represents a “sunrise” or a “sunset” for clean energy in the state will come down to how utility regulators implement it, said Kemerait. “I think it is a sunrise,” she said, but “there is a considerable amount of work that needs to be done to ensure that North Carolina continues to be a viable state for renewable energy.”

3. The current utility regulatory framework has its limits.

Duke’s $13 billion “grid modernization” proposal, unveiled a year ago at the same conference, is still maligned for not doing enough to encourage distributed clean energy projects or give customers more information about electricity use. But if there was one thing clean energy advocates and Duke Energy agreed on during a morning panel on the “future of energy,” it was that the current utility model gives the company limited options to recoup new grid costs, whatever their value, if electricity sales remain flat.

“Right now, our regulatory framework is preventing the alignment of interests between customers and the utility,” said panelist Ivan Urlaub, executive director of the North Carolina Sustainable Energy Association. “That’s why we see a lack of enthusiasm at this stage for the [Duke grid] proposal.” 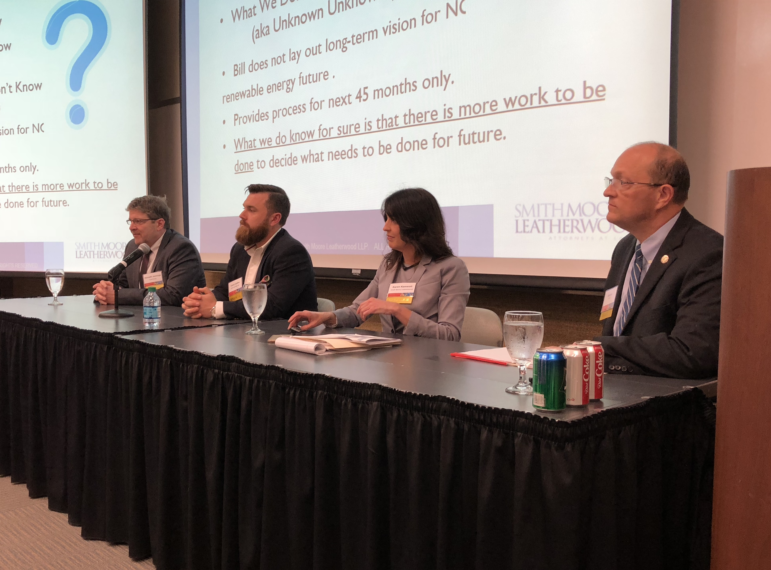 4. The state’s next clean energy source could come from the ocean.

The Tar Heel State is best known as a leader in solar energy, but Mike Muglia, a researcher from the University of North Carolina Coastal Studies Institute, said the state was also pioneering efforts to harness the ocean’s current to produce electricity.

With 35 times the flow of all rivers in the world combined, the Gulf Stream could power the state many times over. The key is tapping the ocean current’s flow at a fixed, relatively narrow point, where it acts like a garden hose.

“You want to go to somewhere the hose doesn’t move so much,” Muglia said.

A huge drop-off in the continental shelf off Cape Hatteras provides just such a corridor, and it’s one of only two such spots in the United States. (The ‘garden hose’ is also in effect off the coast of Japan, where researchers are studying the Kuroshio Current.)

Despite ocean energy’s enormous potential, researchers are starting small, with the aim of powering Navy operations at sea. Muglia also said turbines in the ocean could help reduce the impact of currents on above-sea wind turbines, such as those planned off the coast of Kitty Hawk.

5. Despite the headlines, the nuclear industry says it’s optimistic.

With cost overruns and mismanagement causing the demise of a multi-billion project in South Carolina, and a plant in Georgia hanging by a thread despite similar problems, the trend lines don’t look good for nuclear energy, even in a region once unique for embracing it.

But a panel said a nuclear renaissance was still on the horizon and that engineers were working furiously to address the industry’s skyrocketing operating and construction costs. Proposed redesigns range from the grand (burying an entire plant underground to reduce the workers needed) to the banal (purchasing one type of glove instead dozens to save hundreds of thousands of dollars).

Bob Coward, president of the American Nuclear Society, said the bulk of the safety regulations governing the industry were unnecessary and could be scrapped.

“The future is bright,” insisted panelist Mark Sartain, the vice president of nuclear engineering for Dominion Energy, “but there are a number of fundamental challenges for us.”

6. Small co-ops and munis are emerging as energy innovation laboratories.

With their nonprofit missions and small customer bases, many city-run electric utilities and rural electric cooperatives have emerged as laboratories for innovations in clean energy and energy efficiency.

At the conference they showcased their efforts, including more than a dozen community solar projects, the widespread deployment of “smart meters” that give customers real-time information about their electricity use, and a range of microgrids — small, self-powering energy systems that can disconnect from the larger grid in times of emergency.

Though Duke Energy serves the most customers in the state by far, these nonprofit utilities serve as a breeding ground for programs that can be implemented on a larger scale, said Mark Brown, who runs customer programs for the city of Fayetteville’s public works commission.

“I think we can be role models,” he said.

7. The oil and gas industry isn’t going away soon, but it sees the trends.

Dave McGowan, executive director of the North Carolina Petroleum Council, predicted, “we’re going to see natural gas remain a part of our energy mix for the next 30 or 40 years.”

But even in the gas industry, McGowan said, the “energy transition is a big topic,” and there is wide recognition that sustainable sources will increasingly replace fossil fuels.

“We understand that’s the trend,” he said. “We know that’s where we’re going on the horizon.”