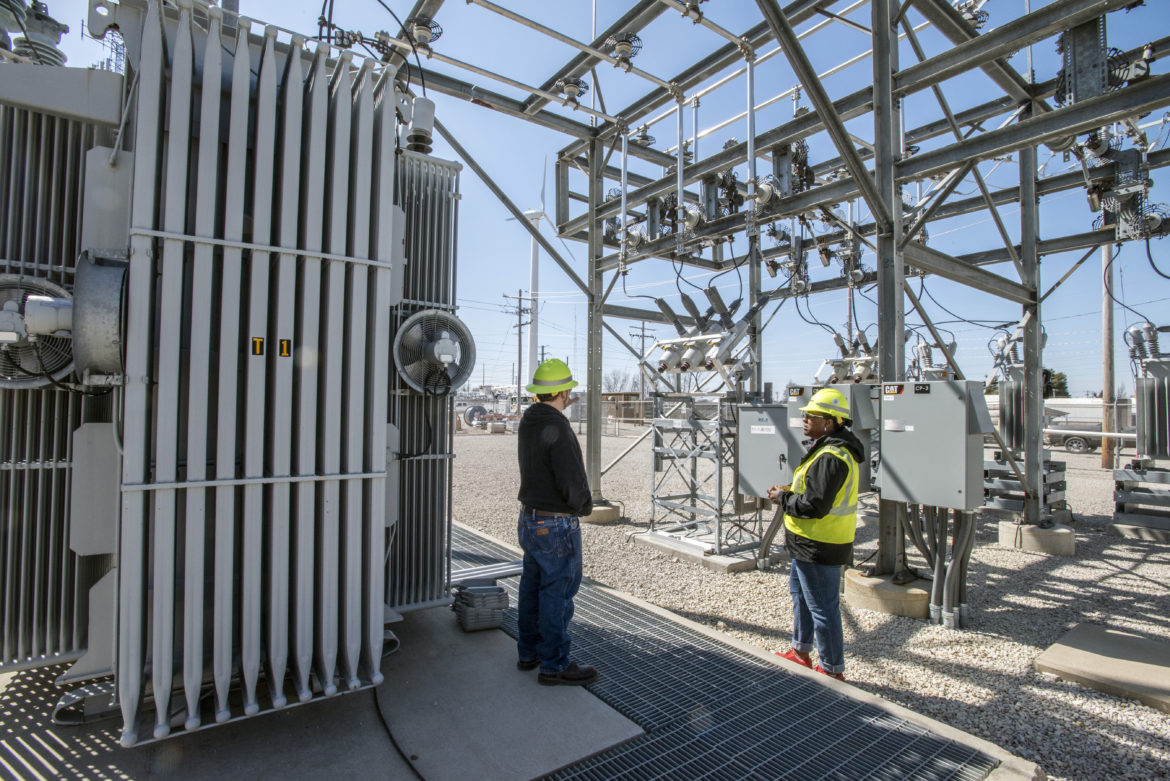 Ameren's Marcelyn Love and Dan Muhleman monitor equipment while the Champaign microgrid 'islands' from the broader utility, during which time the microgrid maintains its own power.

Blockchain startups say utilities and regulators in Illinois have been more open to working with them than in other states.

Revolutionary rhetoric around blockchain’s potential to make traditional utilities obsolete has fostered tense relationships in the energy world. Startup companies boasting about wanting to democratize the electric grid with peer-to-peer software haven’t been welcomed everywhere by the monopoly firms that have managed the system for nearly a century.

In Illinois, though, a less-antagonistic dynamic is emerging, with blockchain companies courting collaboration with the state’s largest utilities.

“A lot of blockchain guys want to tear down the existing grid and put the utilities out of business,” said Mark Johnson, founder of the Chicago-based Clean Energy Blockchain Network. “But that’s not our approach. They are on the team, and we are trying to strengthen the grid.”

The project involves researchers at Northwestern University, and Power Ledger, an Australia-based blockchain platform developer. The group wants to develop a peer-to-peer energy trading platform in Illinois in which the utility is paid to transmit power between neighbors with solar panels or batteries. Johnson said the group has had talks with ComEd, though a representative from ComEd said there is no partnership in place at this time.

The group is targeting large-scale energy users, especially those with carbon cutting mandates like universities and large industrial campuses. Graduate students at Northwestern University will use data collected by the project to quantify the benefits of energy blockchain trading, like how much carbon is cut, how much energy is spent, and how much money is saved.

Meanwhile, a Chicago blockchain startup called Omega Grid is working with utility Ameren to test its software on the utility’s experimental microgrid. Last year, Omega Grid was one of seven companies invited to participate in the Ameren Accelerator, an energy start-up incubator based in St. Louis, Missouri.

“Omega Grid is creating the opportunity for a peer-to-peer energy transfer by using existing utility infrastructure,” said Brian Dixon, head of the energy incubator and chief operating officer of Capital Innovators in St. Louis, Missouri. “They built blockchain technology to allow individuals to push energy back and forth to each other and buy and trade by using their software platform and using the utilities existing infrastructure.”

At a demo day last October, Killian Tobin, CEO of Omega Grid, announced that Omega Grid would be partnering with S & C Electric Company on the blockchain pilot located at Ameren’s microgrid in Champaign. The microgrid has a natural gas generator, a kilowatt scale wind turbine, a solar array, and battery storage on site. Tobin said that this would be “the first blockchain transactive energy project at the microgrid at Champaign,” Tobin said.

They are testing the software, currently, and Tobin expects the project to be completed by the end of the year.

Blockchain is a digital ledger platform that verifies transactions and other functions without the need for a central authority. The basic argument for blockchain software on the grid is that it can track the production and consumption of power, help fund renewable energy projects, and enable owners of solar panels or batteries to sell electricity to neighbors, commonly called peer-to-peer energy trading.

“There is a big change happening in the industry,” Tobin said. “We have operated pretty much the same way for 100 years, where electricity is generated at a far-flung place and sent to the community it serves. Now it is more economical to generate electricity locally, and we have a system that helps utilities manage all these new sellers on their distribution grid.”

The first credited peer-to-peer energy transaction exchange took place between two neighbors in Brooklyn in April of 2016 through a blockchain platform built by Lo3 Energy and Consensys Systems. Just two years later, according to a report by GTM Research, there are 122 organizations involved in blockchain technology and 40 deployed projects.

So, why is this happening in Illinois? One reason is state policymakers are trying to reimagine the modern utility and have undertaken an ambitious year-and-a-half-long project known as NextGrid to study the grid of the future. Also, both of the state’s largest utilities have invested in microgrid projects.

Distributed energy is expected to balloon in the coming years after the passage of the Future Energy Jobs Act. Software developers are optimistic about blockchain’s potential help manage that new generation in the state, even as the regulatory pathway remains thorny and untraveled.

For now, at least, there’s goodwill here between the upstarts and utilities, but that doesn’t mean that utilities here are embracing blockchain technology without skepticism.

ComEd executives frequently talk about the potential for microgrids and tout the controversial project in the Bronzeville neighborhood of Chicago, where blockchain software could, in theory, be used to push power around. But Scott Vogt, vice president of energy acquisition for ComEd, said he is not yet convinced yet that there’s market incentive in Illinois for blockchain software to be used on the wider grid.

Illinois is a retail-choice state, so customers can already choose clean energy generation through their utility, and people with residential solar can participate in a net metering program. All the electricity they put back onto the grid in Illinois is paid back at a retail rate.

“In Illinois, because we are going to pay for the value of the energy when it comes onto the grid, they are getting market value for the energy,” Vogt said. “The question: could they sell that power at a price above market? If the answer is yes, then someone is willing to pay more than market for the power, I could see transactive energy having a role.”