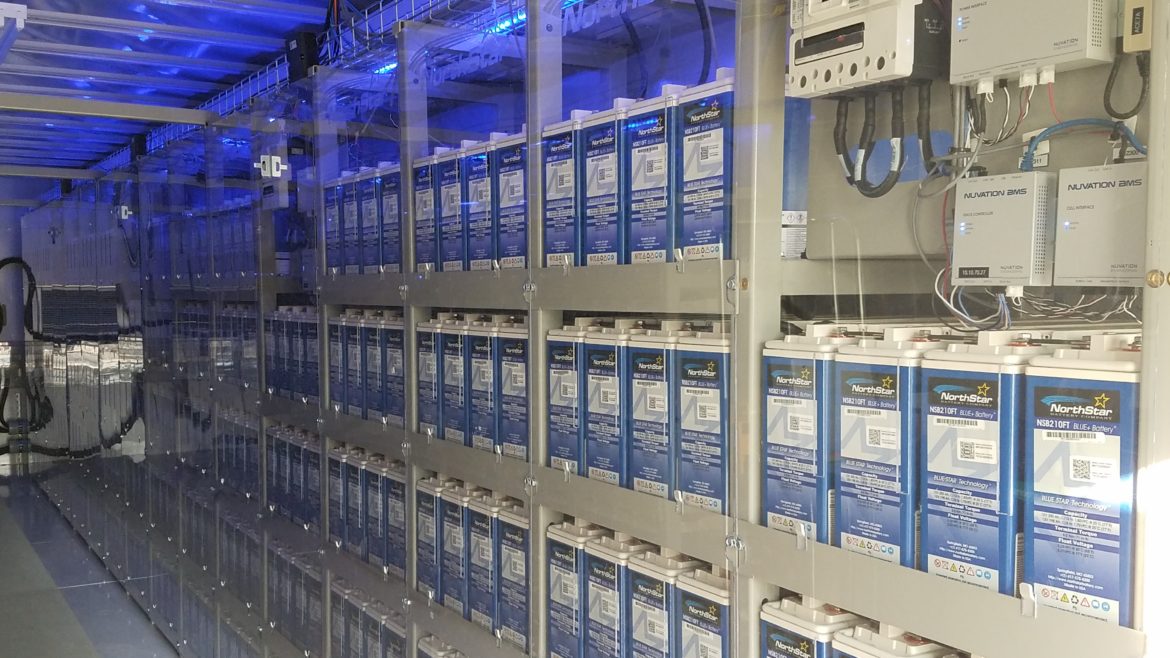 City Utilities in Springfield, Missouri, partnered with NorthStar Batteries to incorporate energy storage at a substation.

City Utilities of Springfield, Missouri, partnered with a local battery manufacturer on a storage pilot project.

A municipal utility in Springfield, Missouri, is testing the potential of old-school lead batteries to help manage peak demand and extend the life of equipment.

City Utilities of Springfield, Missouri, announced a partnership last year with a hometown battery manufacturer, NorthStar Battery, on a pilot project to integrate energy storage at a substation serving a growing area of the city.

Substations, which decrease the voltage of electricity before it reaches customers’ outlets, can incur a lot of wear and tear on hot, summer days when air conditioners cause spikes in demand. The utility hopes the batteries can help smooth the substation’s load as the weather heats up and allow it to postpone or perhaps eliminate the need for costly upgrades.

Meanwhile, the project is NorthStar Battery’s first foray into the energy storage market, where much of the attention has focused on faster-charging lithium batteries. The company is confident the project will demonstrate that its batteries can play a role in managing the electric grid.

The public-private partnership is also a novel approach to energy storage in the Midwest, according to Josh Campbell, executive director of the Missouri Energy Initiative.

“It’s not being used in the way most folks think of energy storage,” Campbell said. “It’s not creating a microgrid, and it’s not associated with solar. It’s being used for grid smoothing, which makes equipment last longer.”

City Utilities approached NorthStar a couple of years ago right around the time the company was considering an entrance into the energy storage space. Founded in 2000, the company sells lead batteries around the world, largely for use in vehicles, cellphone towers, and backup power systems.

The utility serves about 114,000 predominantly residential customers. The city’s annual growth in electric consumption has stalled, but demand is growing in the southwest part of town due to an influx of commercial and residential development. The substation that serves the area is already heavily loaded on hot summer days. The utility wanted to avoid investing in more generation or distribution infrastructure, spokesman Joel Alexander said.

“We started talking about this project,” said Jay Lohrbach, who was a project manager for the utility until March, when he joined NorthStar as sales manager for energy storage systems.

Maintaining sufficient capacity in growing and changing areas can be tricky, Lohrbach said. One big customer coming into the territory can create the need to build new generation or distribution infrastructure — projects that can cost several millions of dollars and take two to three years to develop. Batteries, on the other hand, are relatively cheap and can be deployed in a matter of months. They can even be moved if necessary.

The utility and manufacturer split the roughly $1 million cost to install 1,140 12-volt batteries at the southwest substation. The 1.1-MW/1 MWh system began operating in November and so far has performed as anticipated, Alexander said. The real test will come as temperatures rise. The team is eager to collect data on how it performs under the stress of hot summer days.

The batteries are a modified, prototype version of a product line typically used to provide backup power to cellphone towers. They’re connected to a battery monitoring system, also made by NorthStar, that allows the utility to control how and where batteries are charged and discharged.

“The key thing is that when you have many batteries in parallel, in strings, you have to maintain their balance,” Lohrbach said. “Their charge and discharge has to be controlled precisely.”

The use of lead-based batteries is a departure from the mainstream of energy storage.

“Everyone’s focused on lithium,” Campbell said. “In Missouri and the Midwest, we have access to lead. This is a way to demonstrate that this is a marketable product.”

Lithium batteries have advantages over lead. They are much lighter, can charge more quickly and generally have longer lifespans than lead batteries. But they also require cobalt, a mineral with an escalating price and potential supply challenges in the future. And the lead in nearly all batteries is recycled. Recycling systems don’t yet exist for lithium batteries.

Lohrbach is confident the project will perform as designed.

If the utility’s demand projections in the growth corridor pan out, he said, “The utility within two or three years would have to make upgrades on this distribution line. We put this (battery) in early ehough that it will allow us to get ahead of the game before those improvement would have had to be deployed. They can call it an infrastructure deferral project.”

The project prompted the Smart Electric Power Alliance to include Springfield on a list of 10 utilities that connected the most energy storage to the electric grid in 2017. The group’s CEO commended the Springfield utility for its “innovation and leadership that utilities across the country will continue to build on as we move toward a clean, smart and resilient energy future.”