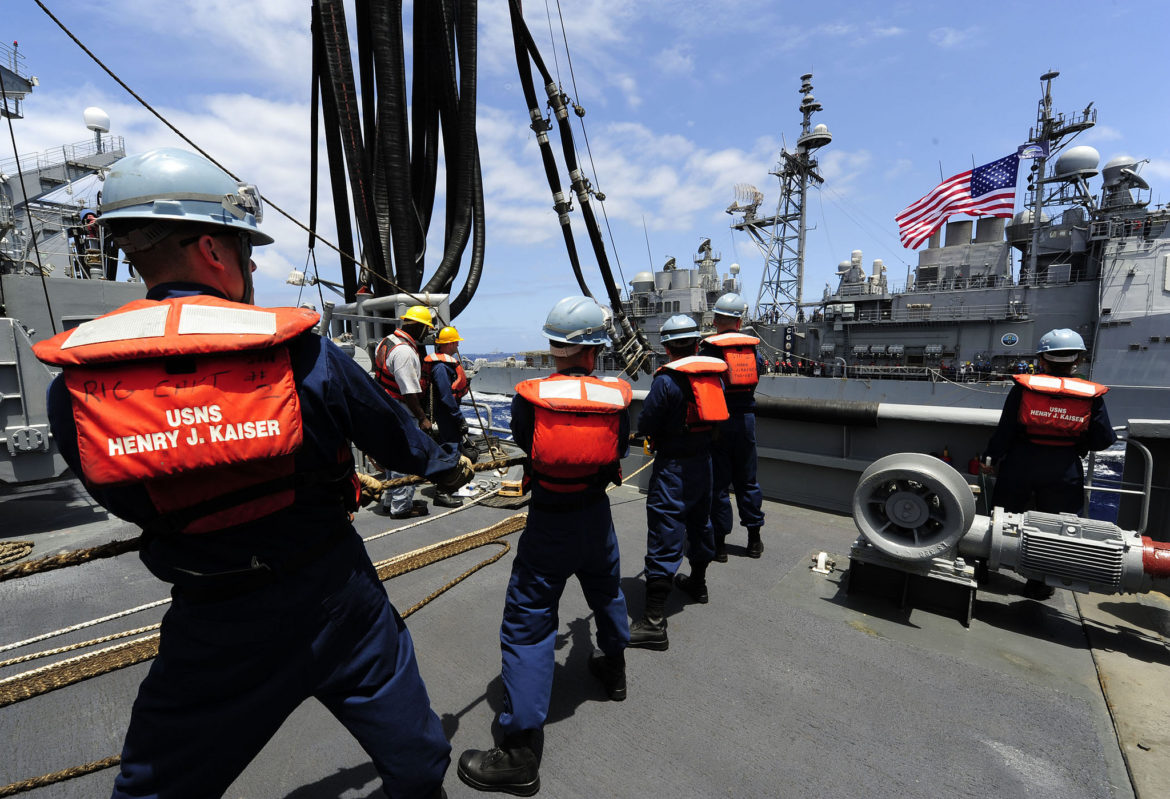 U.S. military members prepare to transfer biofuel to a guided-missile cruiser during the Great Green Fleet demonstration near Hawaii in 2012.

A retired Air Force general talks with Midwest Energy News about his solar-powered Wisconsin home and the case for developing alternative liquid fuels.

Energy was always on General Donald J. Hoffman’s mind, as a kid growing up in a big family in central Wisconsin, and in the Air Force where he was a pilot and managed Air Force weapon systems from bases around the world.

As Hoffman explains it, energy has always been at the core of military operations “whether it’s food for human legions, fodder for Napoleon’s horses… or liquid energy to move ships, planes and tanks. For every ship commander, every pilot, energy is foremost in their mind.”

After 42 years in the military, Hoffman retired in 2012 as a four-star general and returned to central Wisconsin, where he lives in a solar-powered home and focuses on energy security and climate change as a member of the CNA Military Advisory Board (MAB), a group of retired three and four star generals from across every branch of the U.S. military.

Along with graduating from the Air Force Academy, Hoffman has a master’s degree in electrical engineering from the University of California, Berkeley. In April, Hoffman participated in meetings with the Wisconsin Conservative Energy Forum, which is focused on clean energy and energy efficiency. During the visit, he also talked with Midwest Energy News. The conversation has been lightly edited for length and clarity.

I’ve been a consumer of energy all my life. I grew up in a family of 12 kids — from day one it was all about efficiency and safety and conservation, that’s been ingrained all along.

It’s to our national security benefit to move in this direction. Parts of the world have been held hostage by those who have the fuel versus those who need the fuel. We’ve had to make some unsavory deals with different characters who don’t necessarily share our values [in order to protect access to oil]. To go to non-traditional fuels gives us more opportunity to not be held hostage by countries that have the supply.

Q: What is the military doing to use more diverse and alternative liquid fuels?

We have a lot of administrative vehicles on the bases — tanks, armored personnel carriers — using flex fuels, getting higher mileage. Also, we’ve qualified our aircraft to fly on synthetic fuels, including blended fuel for natural gas and coal — not unlike what Germany did during the end of the war, and what South Africa did during apartheid.

Q: Are you saying the liquefied coal blend used by South Africa and Germany in those eras would be a form of cleaner or more secure energy?

Yes, natural gas and coal that was liquefied. In test quantities, it worked fine, it’s actually a cleaner burning fuel than JP-5 [traditional jet fuel]. It increases the diversity of the types of fuel we can use, it gives us more options.

We’ve also started to get into biofuels, from chicken scrap, algae, other biofuels. We see success in that area too. There’s no big manufacturer, but we think the U.S. trucking industry will take the lead in that. A diesel exhaust additive [to reduce emissions] is a workaround. Eventually, diesel fuel will have to be even cleaner than it already is.

Q: What role do electric vehicles have to play in the alternative or diversified liquid fuels landscape that you envision?

This is a rapidly changing field, and quite frankly the United States is lagging in this area. In the European field, multiple countries have set a date at which they will no longer sell traditional vehicles but all electric. The dates out there are 2030 and 2040 in most cases. Norway’s leading the pack — by 2025 you won’t be able to buy a gasoline or diesel vehicle. Meanwhile, in our country, we’re trying to walk back the miles per gallon [efficiency standards for vehicles].

This all may be overcome by events — the battery technology is maturing, competition in EVs is happening very fast. Within a decade there will be more electric vehicles than gas vehicles. People will vote green — not green in the sense of the environment, but because it’s cheaper to buy an electric vehicle. There are not as many moving parts, it’s the performance of a Porsche at the price of a Chevrolet. People will be attracted to that, especially for shorter commutes. This is going to happen based on economic factors and it’s going to happen fast. We may all have bought our last internal combustion vehicle.

Q: Does a shift to electric vehicles increase national security?

In the sense that it frees up remaining extractable supplies of liquid oil, yes. We use it where we really need it. I don’t see a tank [being electric] any time soon, or a fighter jet. From a supply and demand standpoint, our demand [for oil] is going to be there for a while. As it gets harder and harder, more and more expensive to extract, the remaining [petroleum-based] fuel you do have should be used in the most appropriate way.

Q: What are your views on electricity generation, what sources are clean and what should we be using?

On the electricity side we need to diversity of fuel. Right now the grid is powered by just a couple sources of fuel, and a couple of those have environmental aspects attached to them. We should try to be more resilient by having more sources: hydro, wind, geothermal, here in the Midwest, bio-digesters. Because it’s so hard to get the permitting on big coal and nuclear plants.

Q: Does coal have a role?

For a while. There’s an energy density to coal and a storage aspect in coal. If a big pile of coal is sitting outside a power plant, that is storage. If a pipeline of natural gas stops, you don’t really have much storage; if the sun doesn’t shine the renewables can suffer from intermittency. Hydro is good in that respect because all the water above the dam is storage.

But I see coal in its final state, no matter what’s being done at the federal level. Insurance companies are moving away from coal, mining companies are selling mines… coal will survive in some parts of the globe, but I would not make an investment in coal.

Q: What would you like to see happen on the federal and state level regarding energy policy and different fuel sources? Are you in favor of incentives for solar?

I think economically it can buy its way in as long as we don’t mess it up. Try to get a level playing field. I’ve got solar at home — I figure if you can do that in Wisconsin, you can probably do it anywhere.

For any form of energy, a discussion [calculating costs and benefits] has to include all the way from initial discovery and extraction to consumption, including the waste products associated with consumption. What’s the value there, what’s the cost, and then have an intelligent conversation about what’s better than what. I don’t think there’s any one winner — it’s very localized. If you’re a state sitting on coal, you say, ‘Why am I walking away from this’…In Wisconsin it might be bio-digesters and hydro.

Q: When did you install solar and what kind of system do you have?

I put it in the fall of 2013, a 17kw system, 72 panels ground-mounted that can adjust tilt for the seasons. I burn wood and biomass, but that would fall on the ground rotting otherwise. So in a carbon sense I generally consider myself carbon neutral — other than my chainsaw. And I have passive solar. I lived in government-issued houses, foreign houses for 42 years. When I finally got to build the house I wanted, it’s solar.

Q: Renewable energy has become part of the culture wars in these really polarized times and some people would view solar arrays like yours — for example — as something liberal or political. Do you think that’s a problem, is that something you’d like to see change?

When you get down to the individual citizen level, everyone thinks it’s good. It doesn’t matter what tattoo they are wearing or the gang they’re in, they want solar. But then you work your way up, and on the utility side, it’s all about change. Their business model is based on consumption, and they want to buy coal. There are forces at play who are going to change the business model.