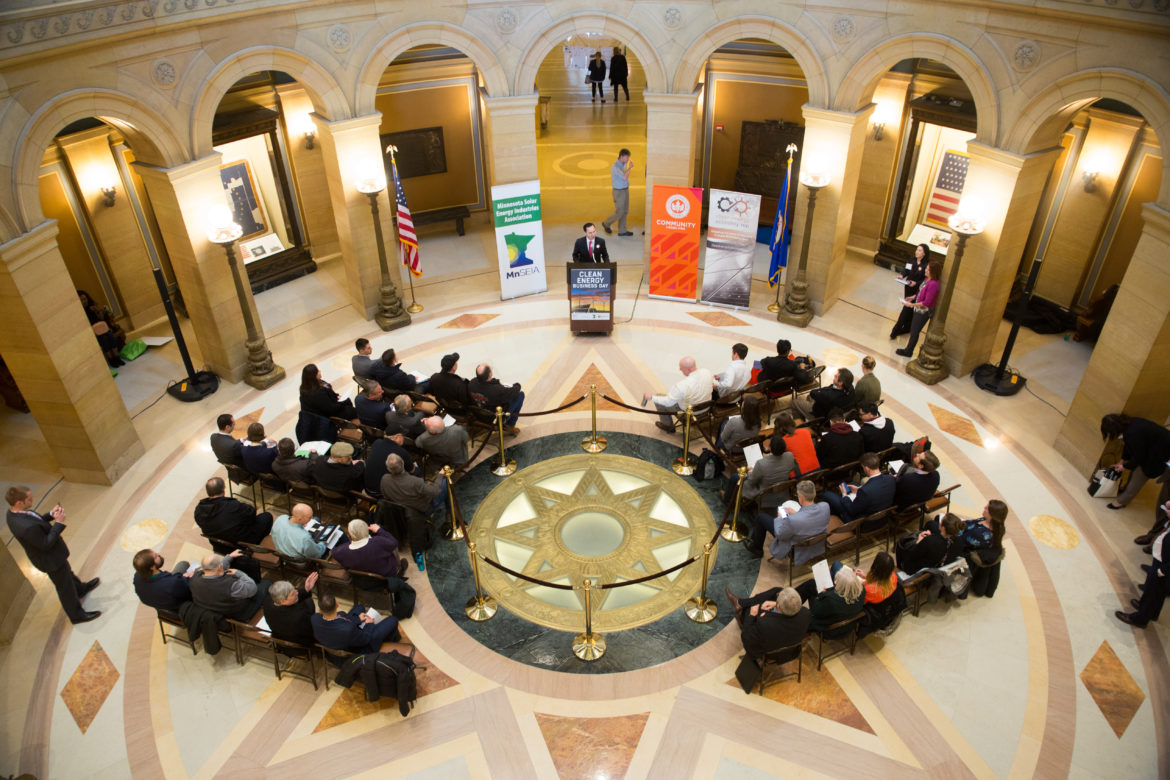 Clean Energy Economy Minnesota in its second year has raised its profile at the State Capitol, including forging relationships with rural and suburban conservatives.

State Sen. Eric Pratt, a suburban Republican from Prior Lake, said he was surprised to learn from the group how many companies across the state work in the clean energy industry. A newcomer to the energy and utilities committee, he said he’s not afraid to fight legislation, even from his own party, that could hurt the industry.

“One of our members said ‘look, this clean energy train is coming’ and we can hop on board or get run over,” Pratt said. “I chose to hop on board.”

The momentum for Clean Energy Economy Minnesota comes largely from the leadership and persistence of Gregg Mast, its 41-year-old executive director. The Korean adoptee still looks like a bit like the Boy Scout he once was, albeit a bit older and wiser. He’s clean cut, has a warm and friendly demeanor and wears a suit-and-tie for events in the age of casual dress, a subtle indicator to people he meets that clean energy is serious business.

Mast grew up in the tiny town of Blooming Prairie in southern Minnesota, where his entrepreneurial father owned a metal shop that eventually supplied materials to clean energy companies. He started his career in corporate finance before transitioning into clean technology development and consulting.

While they were effective in their own way, Clean Energy Economy founders saw an opportunity to push a consistent, business-oriented message through political advocacy, communication, networking and education opportunities.

Groups with similar missions exist in other states, including several under the banner of Advanced Energy Economy, which has partners in Illinois, Michigan, Ohio and Indiana.

A major turning point for Clean Energy Economy Minnesota came last year when it received a two-year, $300,000 grant from the McKnight Foundation. Its staff grew from two to four people, allowing it to get in front of more legislators, business groups, clean energy companies and potential allies.

Mast ticks off a list of accomplishments so far. It has more than 30 members, including two of the nation’s leading renewable installers, Mortenson and Blattner Energy, along with several smaller businesses.

The group aims “to make a business case for being sustainable,” said Bradley Heitland, a board member from Mortenson. “People always want to do the right thing, but it’s always easier to do the right when it pencils in.”

Clean Energy Economy Minnesota board chair Marty Morud, who is also CEO of TruSolar, said the focus on job growth helps the group stand out.

“Proving what clean energy can do with respect to job growth and economic benefit is excellent strategy,” Morud said. “People are listening and noticing.”

The organization has highlighted those number and the people and companies behind them in meetings and roundtables around the state, which have been attended by both supportive and skeptical lawmakers.

This session the group lobbied on several bills. It opposed a residential PACE bill it called flawed and it joined other groups in opposing legislation to make it easier for Xcel Energy bill to charge ratepayers for improvements to its nuclear facilities. It supported a tax credit for residential biomass heating and legislation to promote energy storage. The fate of the proposals remains undetermined.

Republican state Sen. Jeremy Miller praised the group for “the great work they are doing to spread awareness about the contributions that clean energy businesses are making to Minnesota’s economy.” Miller was named “Clean Energy Legislative Champion” by the group for successfully fighting budget cuts that would have hurt small solar businesses last year.

Policy and public affairs director Logan O’Grady said they’ve worked to position the organization as a “centrist group.” Part of its mission is to address misconceptions among legislators and the public that wind, solar, biomass and other renewable energy options cost more money than fossil fuel generation.

The message is that wind is cost-competitive on an unsubsidized basis and solar “is quickly getting there,” Mast said. Distributed energy – solar, wind, bioenergy, microgrids – are helping revive rural communities across Minnesota. Energy efficiency reduces waste, a practice hard for even skeptics to condemn, he said.

“Whether it’s policymakers or even the broader public, people are surprised to learn how quickly clean technology and business models have evolved to meet society’s energy needs,” Mast said.