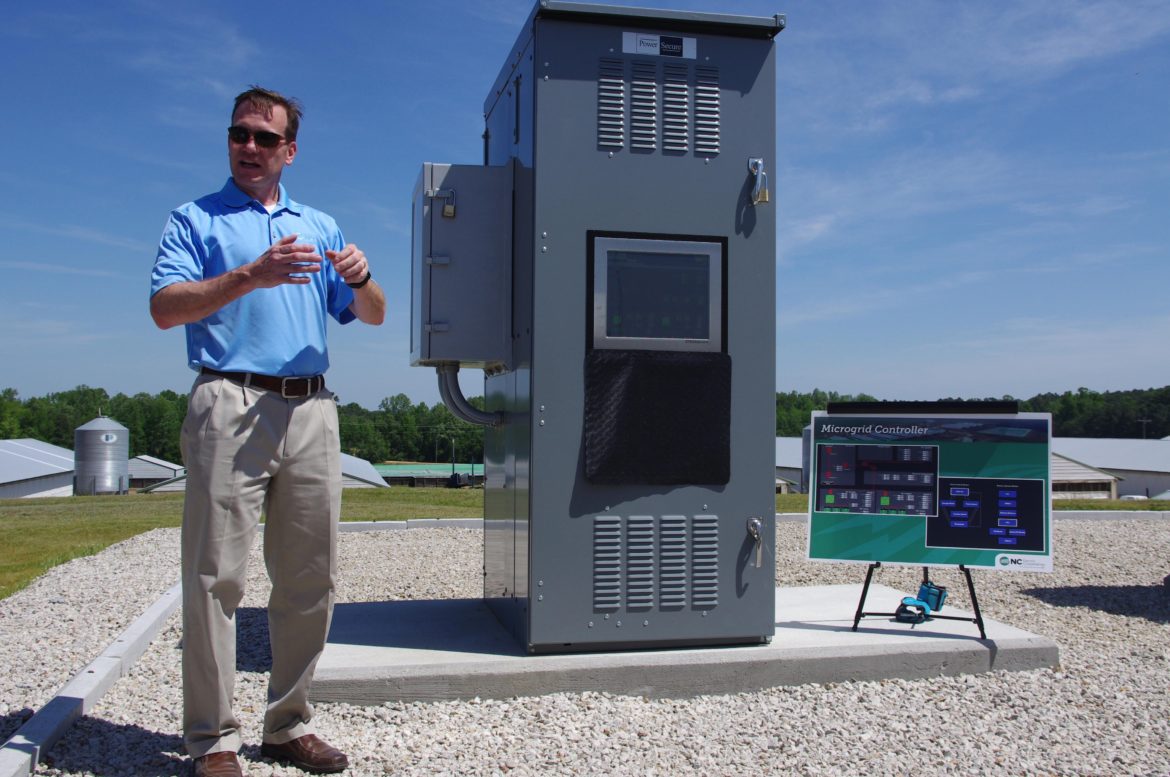 Tom Butler admits he was naïve back in 1995, when he stopped growing corn, tobacco, and other crops and began raising 8,000 hogs on his farm outside Lillington, North Carolina.

Neighbors – many he’d known all his life – quickly began to complain about the stench from open-air manure pits wafting into their cars or seeping into homes.

“That was our first incentive to do better,” he recalled.

Butler, a spry 77-year-old who still runs the operation, has been experimenting with ways to do better ever since. He covered his waste pits to help reduce odor. He became the second farmer in the state to capture and burn methane gas from manure to create renewable energy.

“This is going to give us a boost,” Butler said, “to get more interest [from the industry]to invest in this kind of technology.”

‘An investment in potential’

A partnership with South River Electric Membership Corporation and the state’s electric co-op association, the microgrid ties together a 250-kilowatt battery system provided by the co-ops with resources Butler already had on his farm: 20 kilowatts of solar panels, a 100-kilowatt diesel generator, and a 185-kilowatt biogas generator.

Under normal conditions, when the project is connected to the larger grid, South River can deploy the renewable energy stored in the project’s batteries to offset expensive ‘peak demand’ electricity, eventually saving co-op members money.

“We’re making an investment in the potential,” said Catherine O’Dell, vice president of member services and public relations for South River, who acknowledges the project isn’t a money-making proposition yet.

In the event of a wider power outage, the microgrid can be “islanded” to power just the farm, or the farm and 28 nearby homes. Ultimately, the microgrid will be able to sustain 150 homes, a comfort in a region still recovering from Hurricane Matthew, which struck two years ago.

“If this had been in place at the time,” O’Dell said, “that would have been a great benefit to not only to Mr. Butler but [also] his neighbors.”

South River and the rest of the state’s electric utilities have another compelling motive for promoting biogas microgrids: they’re required by a 2007 law to sell a tiny fraction of hog-waste-to-energy, but are struggling to comply.

One reason is technical. Producing electricity and negotiating power-purchase contracts with utilities requires skills not inherent in farming. Another challenge is what Butler calls “the economic feasibility thing.” Biogas systems cost $1 million or more, and few contract farmers on the state’s 2,100 hog operations have the extra capital to install them.

If South River and Butler can find a way to make the microgrid profitable for them both, it could prompt more co-ops to team up with hog operations across eastern North Carolina.

“That’s what keeps me excited about it, is to learn from it so that we can do it again and again and again,” said Lee Ragsdale, a grid infrastructure manager for the North Carolina Electric Membership Cooperatives.

‘A little unit on every farm’

Power companies aren’t the only ones with a stake in hog-waste-to-energy. Prestage Farms (with whom Butler contracts), Smithfield Foods (the world’s largest hog producer), and others are under mounting pressure to move away from open-air waste pits that remain standard industry practice.

Last month, a unanimous federal jury awarded $50 million to neighbors of a Smithfield Foods farm who complained of decades of exposure to noxious fumes. Though a judge this week slashed the penalty dramatically, the initial verdict sent a warning to the industry. Dozens of other similar cases are in the offing.

The updated license standards should encourage the methods used at Butler Farms, said Michael Regan, the secretary for the state’s Department of Environmental Quality.

“There’s a big gap between where the traditional hog farm is today versus where Butler Farms is,” said Regan.

“This is as cutting edge as it gets in the farming industry,” Lewis said. “You feel like you are a part of what will become common place 10 or 20 years from now.”

Butler, who shows no sign of retiring soon, likes to show off his “happy pigs,” and wants to keep experimenting until costs come down enough to make such a future possible.

“I wish we could have a little unit on every farm,” he said.