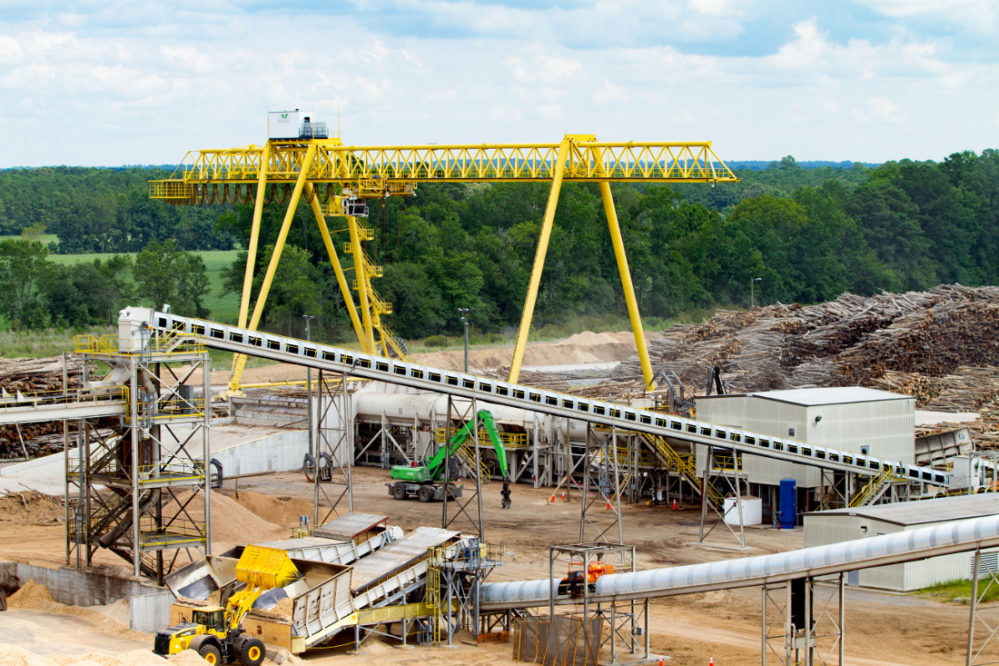 An Enviva mill in Virginia manufactures wood pellets to export to Europe. A similar facility proposed in North Carolina was under scrutiny.

The U.S. South has fast become the world’s largest supplier of wood pellets, a rising source of fuel for power plants primarily in Europe.

An environmental group’s new report says the rapidly growing industry is threatening public health on this side of the Atlantic, with enormous pellet plants using regulatory loopholes to spew substantially more pollution into the air than the law intends — a charge the industry vehemently rejects.

The problem is particularly acute in North Carolina, where pellet giant Enviva Biomass has cornered the market and runs the nation’s dirtiest pellet mill, according to the report. None of the state’s four plants deploy pollution-control devices common elsewhere, it says.

The hundreds of tons of toxic and smog-forming chemical releases are legal, at least insofar as they are spelled out in operating licenses from the state. But report author Environmental Integrity Project contends these permits skirt the nation’s Clean Air Act, and that the resulting pollution disproportionately harms poor people and communities of color in the eastern part of state.

With two Enviva plants currently applying for updated permits, environmental advocates say it’s time for the administration of Democratic Gov. Roy Cooper to “pump the brakes” on facility expansions and rethink its regulation of the wood pellet industry.

A focus on health-threatening air pollution

The biomass industry has built a spate of facilities across the southern U.S. in the last decade, racing to cash in on the theory embraced in Europe — and just recently by U.S. Environmental Protection Agency head Scott Pruitt — that wood pellets are carbon neutral.

Many scientists and environmental advocates have challenged this notion, pointing out that producing, shipping, and burning wood pellets adds carbon to the atmosphere; and that too often pellets are made from whole, carbon-absorbing trees that aren’t replaced quickly enough. While the matter is still hotly debated, multiple studies have concluded the international wood pellet industry is causing more global warming pollution, not less.

The Environmental Integrity Project analysis is the first to focus solely on local air quality impacts from pellet plants, using government records for 21 facilities from Virginia to Texas. From shredding trees, to drying the wood, to pressing it into capsules, each stage of the manufacturing process releases toxic pollutants into the air, including smog-forming particles and highly potent substances like formaldehyde.

Anyone who’s lingered by a campfire too long knows how these chemicals can cause fleeting symptoms, such as stinging eyes or a tightened throat. For those living near wood pellet facilities — who can’t move away as they could from a campfire — the compounds can cause permanent heart and respiratory disease, birth defects, and cancer.

“Those are the endpoints of what you experience,” said Bob Parr, a retired physician active with the advocacy group Clean Air Carolina. “The beginning points are your quality of life is less. Your expenses from health care are greater. Your missed days of work are greater.”

People exposed to the mostly colorless, odorless pollution in areas with limited monitors are also unlikely to know they’re at risk. “It’s insidious and ubiquitous,” Parr said. “You’re not aware of it, and it’s all around you.”

“I call this area the dumping ground,” said Belinda Joyner, the head of Concerned Citizens of Northampton County, where an Enviva plant is within seven miles of plywood mill, a compressor station, and a controversial new gas pipeline.

Joyner believes economically disadvantaged counties like hers are safe targets for industries promising jobs. “They’ve already sized our commissioners up, and they know it’s a easy go,” she said.

Like the other three counties with pellet mills, Northampton isn’t just poor; it also has a higher percentage of African Americans than the state as a whole. And even within those counties, activists point out polluting facilities are sited closest to communities of color.

According to the Robert Wood Johnson Foundation, the four rural counties are also among the worst in the state for health outcomes linked to poor air quality such as number of sick days, low birth rate, and premature death.

That’s no coincidence, said Parr. “You will always be healthier if you breathe clean air,” he said. “If you breathe dirty air, you’re going to die earlier.”

Regulations filled with exceptions and loopholes

The nation’s Clean Air Act is aimed less at stopping new pollution sources altogether and more at limiting their harm. One key tenet: requiring the largest industrial facilities to reduce emissions as much as modern technology will allow.

But the regulations implementing the decades-old law vary widely by state, and they are often riddled with provisos and exceptions, inviting incredible accounting measures that critics say allow pollution sources to game the system to avoid costly emission controls.

A common practice in the wood pellet business is to lock in permit limits just under the pollution threshold of 250 tons per year. Later, a plant can make modifications that would cause another 249 tons per year of emissions without being regulated as a major pollution source.

Enviva’s application to alter its plant in Ahoskie, North Carolina references this technique in complicated legalese.  “Enviva understands that after the proposed modification, Ahoskie will become a major source of … emissions,” company officials wrote. “However, the proposed synthetic minor modification to the existing minor source will not trigger [prevention of significant air quality deterioration] review at this time.”

The Ahoskie plant now releases an estimated 280 tons of smog-forming pollutants each year, and it is permitted to emit just over 391 tons. The Northampton plant is permitted to spew 377 tons per year. Both are classified as minor sources.

“This whole issue of ‘major’ or ‘minor’ is the biggest decision that impacts how much a source controls its air pollution,” said Keri Powell, the environmental attorney who co-authored the report.

Even “major” plants have escaped requirements to use the most effective pollution controls on the market, often by arguing they are too expensive or not applicable, Powell said. For example, Enviva doesn’t employ stringent controls at its Sampson County plant, which releases 628 tons of chemicals annually — more pollution than any other pellet facility in the country.

A special source of dismay for critics: The company’s plants in North Carolina and Virginia are the only ones in the country without technology that curbs smog-forming particles from wood dryers by 95 percent or more.

In its Sampson County plant permit application, Enviva avoids the controls by claiming that it plans to use an “inherently lower emitting dryer that is substantially different from any dryer in operation.” Yet the report found the Sampson dryer alone emits nearly six times as many smog-forming particles as the dryer at the largest pellet plant in the country, Georgia Biomass.

“If Georgia Biomass can do it,” said Powell,  I don’t know why Enviva wouldn’t be able to.”

‘A conversation we’re willing to have’

A spokesman for Enviva said the company was still reviewing the study, but “many of the statements are incorrect.” He offered no specifics, and demurred when asked to confirm the report’s North Carolina data points, which match up with permits issued by the state.

A blistering statement from the U.S. Industrial Pellet Association called the Environmental Integrity Project report “factually incorrect” and based on upon publicly available information that has been “twisted out of context.”

The association also defended state regulations. “The… report is based on a fictional version of the Clean Air Act that the authors would like to see,” the statement said, “but that is not the law currently in place and implemented by the state agencies.”

“These facilities…meet the requirements,” Regan said. But he added: “Whether or not those existing requirements are stringent enough, that’s a conversation we’re willing to have.”

Advocates like Asheville-based Dogwood Alliance, a forest conservation group, welcome that dialogue. But they also say that as Enviva seeks modifications to its Sampson and Northampton facilities, the Cooper administration has an opportunity to tighten controls on permits and prevent further expansion.

“What they need to do is pump the brakes and say ‘no more,’” said Emily Zucchino, a community organizer with Dogwood, “until we have a better understanding of the full impacts this industry is having on our state.”