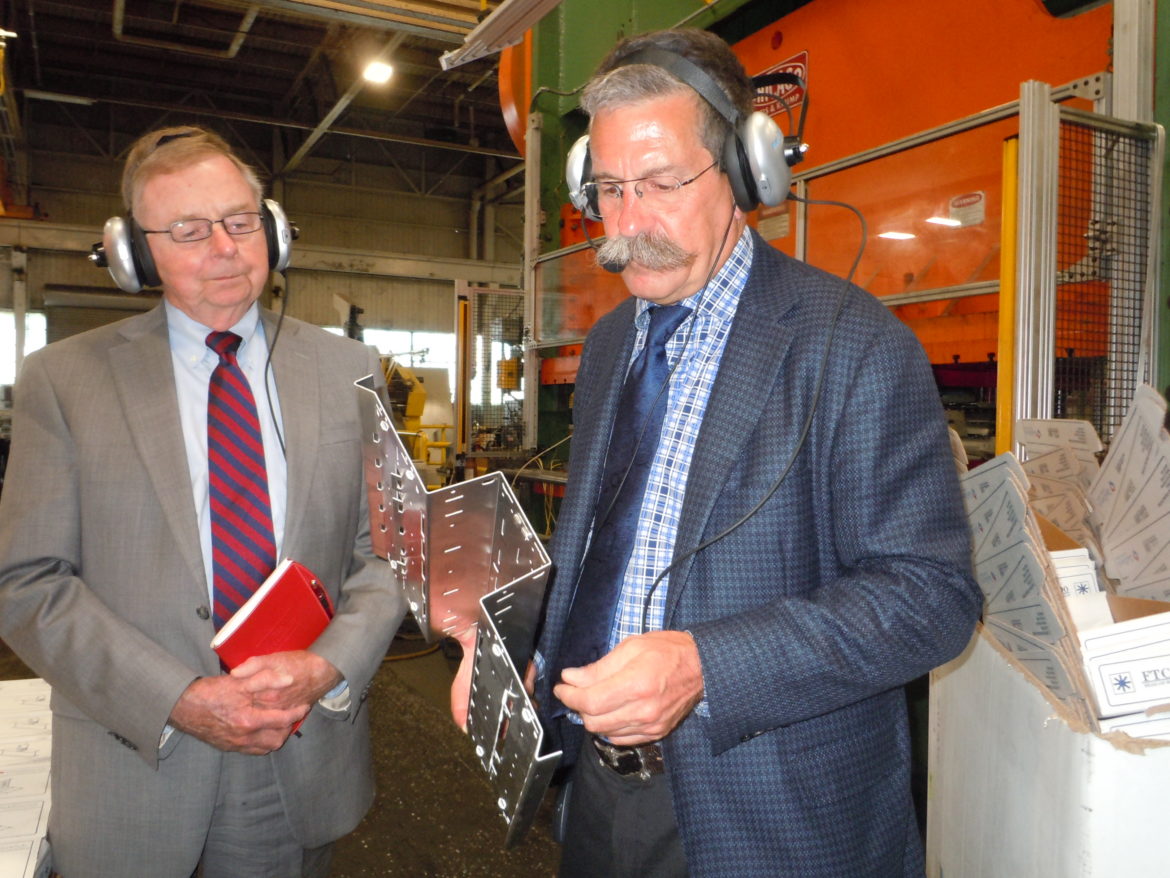 The manufacturer of metal parts for the solar industry says tariffs have put it at a “huge disadvantage” against foreign competitors.

Talan Products’ metal stamping and aluminum extrusion business was close to clinching a huge contract. Then the announcement of the Trump administration’s steel and aluminum tariffs put the project on an indefinite hold.

A group of national security and sustainability experts toured the company’s facilities this week to learn how it is helping to support a sustainable clean energy economy — and how Trump’s tariffs are affecting business.

A pounding clamor echoed throughout the work floor. All that noise is good because it means the company has business, Peplin said through noise-cancelling headsets to the group of former military officials from the Atlantic Council and the CNA Military Advisory Board. Also on the tour was former Cleveland mayor Jane Campbell, who now heads the National Development Council’s Washington office.

The 32-year old company started out making custom parts to support the building industry and began expanding into solar energy around 2007. “We make parts of the structural system,” Peplin said. In other words, not the photovoltaic panel, not the wires, but pretty much “everything else.”

On the day of the security experts’ tour, heavy stamping machines turned out small mounting brackets for solar panels. Another was making flashing for roof-mounted solar panels. Flashing keeps water from leaking into the building below. Yet another machine was making part of the assembly for energy-efficient LED lighting.

Clean energy accounts for more than a quarter of the company’s sales, roughly $10 million per year, and for about 20 full-time jobs in skilled trades at the company. Peplin estimates the company’s annual sales are roughly $550,000 per employee.

“There are approximately 80 jobs that fabricate metal products for every job that produces the metal raw material in America,” Peplin said. For that and other reasons, he said the Trump administration’s tariff policy “doesn’t make sense.” 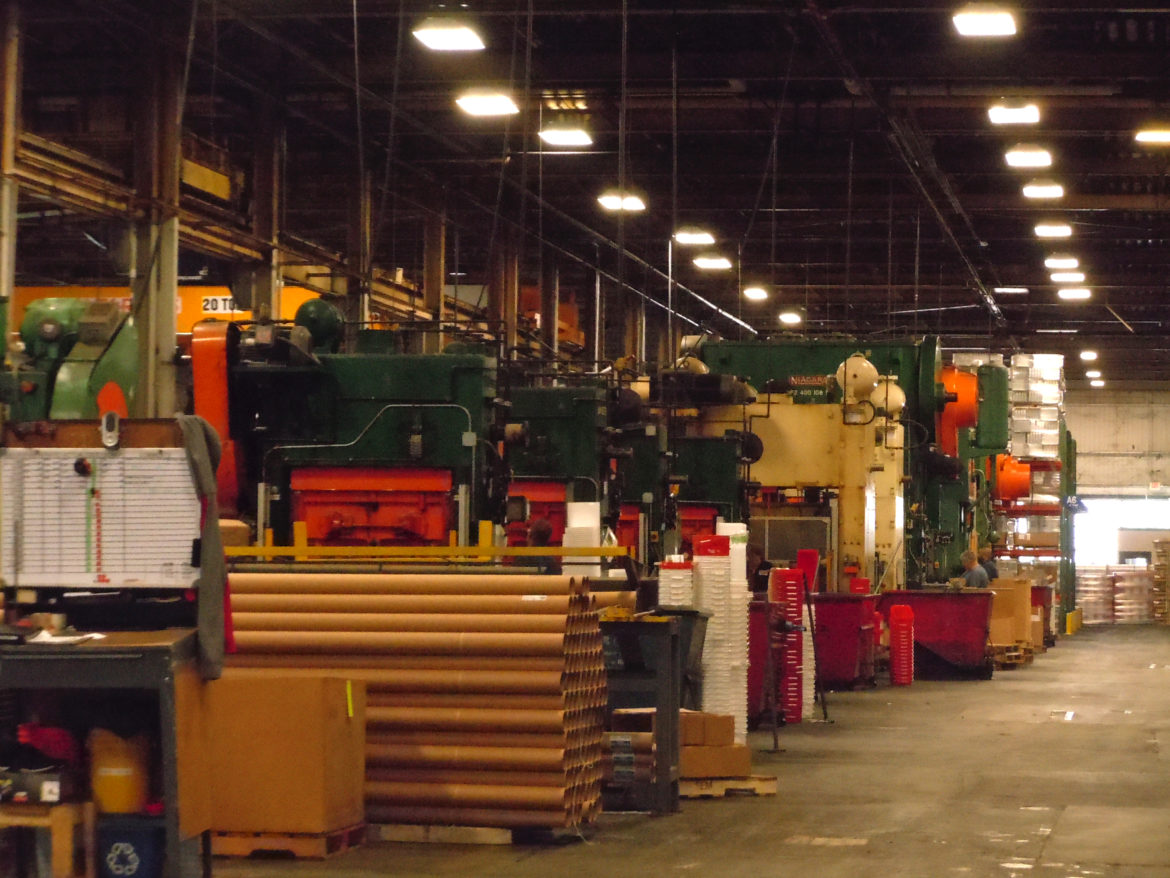 “The last time blanket metal tariffs were enacted, 200,000 manufacturing jobs were lost in 18 months before the tariffs were rescinded,” Peplin said.

Talan Products is a local company, but it faces global competition. “I can barely compete with China when we have a level playing field,” Peplin said. To make up for foreign companies’ cost advantage from cheap labor, his company has focused on high-tech automation, quality control, and efficiency.

But now the tariffs will raise the costs for raw materials. “We have to compete with parts made with lower-cost foreign metal that are imported without tariffs on the imported part,” Peplin noted. “We are at a huge disadvantage.”

The aluminum and steel tariffs come on the heels of a 30 percent tariff on solar imports imposed in January. Those tariffs face multiple legal challenges.

“We’re in a global competition for what’s going to be the new energy economy,” said Joe Bryan, a senior fellow with the Atlantic Council’s Global Energy Center in Washington, D.C. He’s also a principal in Muswell Orange, an energy consulting firm in Hyattsville, Maryland.

In Bryan’s view, energy matters impact the country’s military capability, its innovation, trade and even the ability to conduct diplomacy. “We believe strongly that we ought to be a leader in that field, and we ought not to cede that ground to our competitors,” he said.

Leading in clean energy is also important for U.S. military readiness, said Admiral Lee Gunn (ret.), vice-chair of the CNA Military Advisory Board, based in Arlington, Virginia. Heavy reliance on fossil fuels increases the risks for military convoys in conflict zones, because much of the cargo is liquid fuel, he noted. More generally, climate change presents problems for the military, including sea level rise threats to military installations and reduced training opportunities in areas subject to wildfire risks.

In his view, the United States should lead on climate change solutions. “Ohio is really important,” Gunn said. “This is a manufacturing heartland.”

“The clean energy revolution is here to stay. Even with efforts to artificially support fossil fuels, the writing is on the wall,” Peplin said. “Solar and wind are often the most cost-effective solutions. The market will decide.”