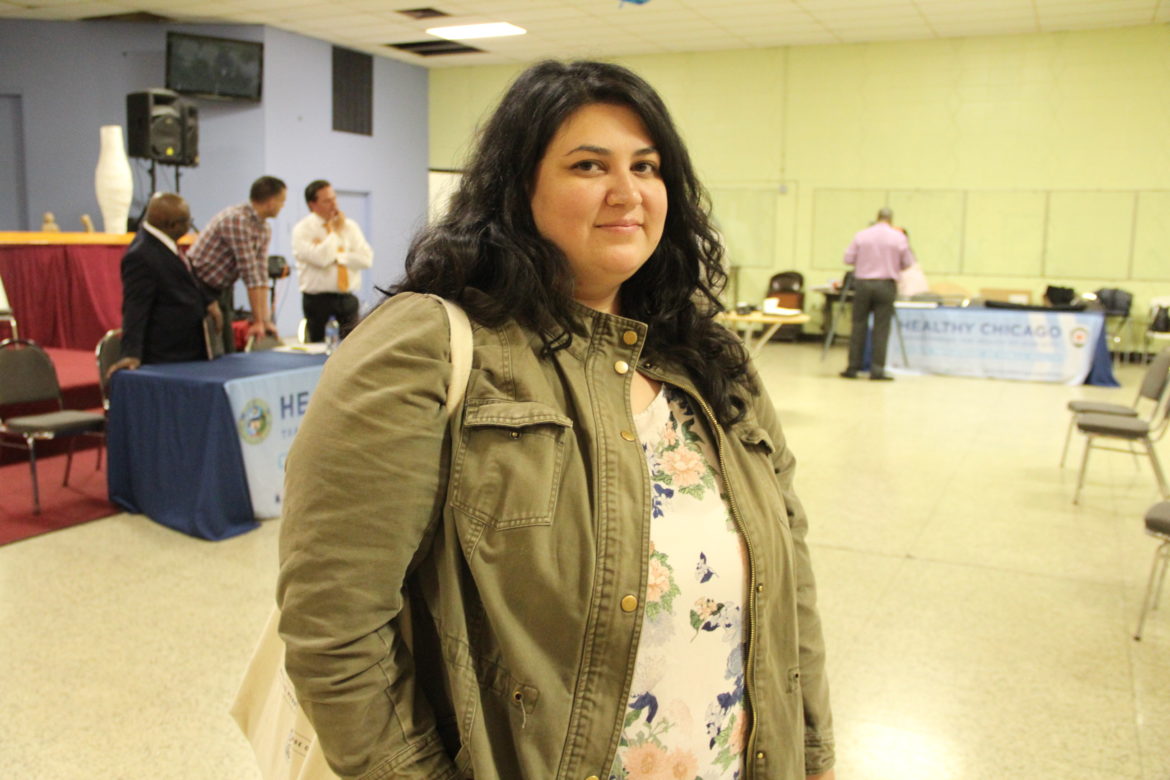 Gina Ramirez is among the residents on Chicago’s Southeast Side who want to see the neighborhood’s identity and economy transformed into one built around clean energy and less polluting industry.

A successful push to rid a Chicago neighborhood of petroleum coke piles has galvanized residents to confront its next pollution challenge.

It was activism by residents of Chicago’s Southeast Side that forced a company that stored massive piles of petroleum coke there to install air monitors to keep tabs on harmful dust from its operation.

When federal regulators analyzed the data from the monitors, they found something else in the air: high levels of manganese, a neurotoxin and byproduct of steel-making.

The extent of the manganese problem became clear around the same time residents won a significant victory in their battle against petcoke. KCBX, the company storing it, was forced to enclose or eliminate the piles; company officials chose to remove them.

Because residents had mobilized around the petcoke issue, they were ready to fight to demand protections from the dangerously high levels of manganese, which were likely coming from a metals storage company called S.H. Bell, as revealed in an August 2016 analysis of data from the petcoke monitors done by the federal Agency for Toxic Substances and Disease Registry.

The public outcry about petcoke, a byproduct of oil refining, resulted in new city rules regulating bulk storage and transfer of materials. Now, the city is revising those rules to regulate the handling of manganese-containing materials.

At a public meeting about the proposed revisions on June 6, residents demanded that S.H. Bell and regulators take greater steps to reduce the risk of health impacts from manganese, and described how the battle against petcoke inspired efforts to change the economy and identity of the Southeast Side, from one of polluting heavy industry to one based on clean energy, light manufacturing and the natural environment.

Olga Bautista, a prominent leader of the petcoke battle, said that fight drew residents together and helped them realize that the Southeast Side — which once thrived thanks to steel and other industry but struggled as companies closed — could build a new economy that didn’t put their health at risk. And the passage of the bulk materials rules and other actions by city, state and federal officials showed that their activism could make a real difference.

“We’re getting to a sweet spot where we’re able to change policy — everyday people, moms and dads, grandmas and grandpas,” Bautista said.

Under the proposed amendments to the rules, manganese-bearing materials would either have to be enclosed, or special monitoring would have to be done with filters to look for manganese pollution in the air.

At the June 6 meeting and in public comments filed with the city, residents and environmental advocates said the proposed new rules don’t go far enough. Many said they want the storage and transfer of manganese and other heavy materials eliminated altogether, and they want the city and company to address human exposure that may have already happened.

Community leaders are urging their neighbors to get their soil tested by the U.S. Environmental Protection Agency, which stepped in after the initial soil testing by the city found more than 70 percent of the yards it sampled with high manganese levels. On June 14, the EPA held an open house for residents to air their concerns. 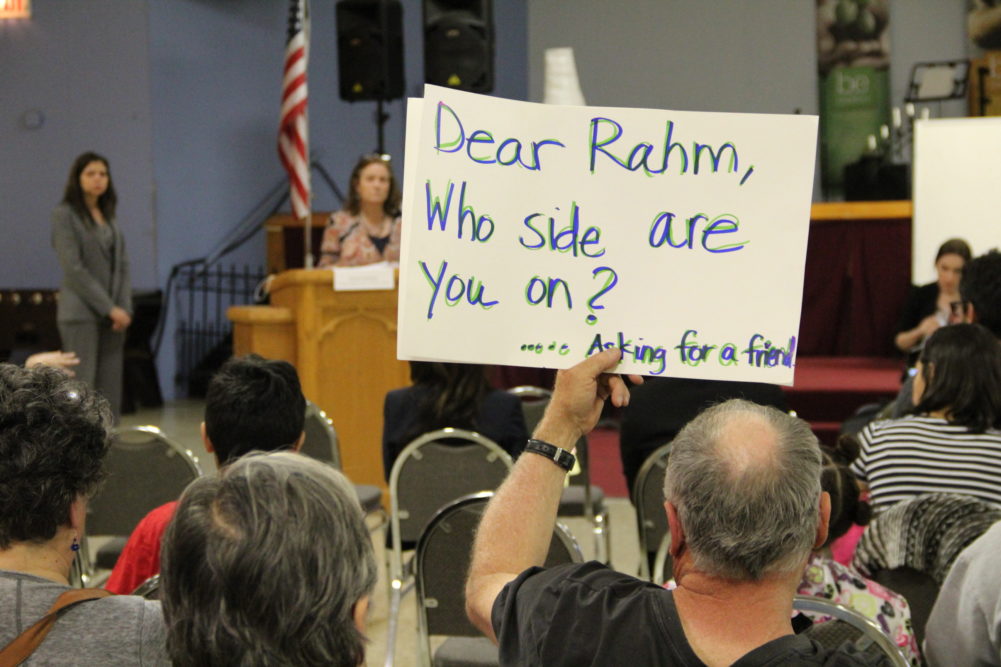 Sue Garza speaks as a resident of Chicago’s Southeast Side holds a poster criticizing the mayor.

City councilperson Sue Garza, who was elected after the petcoke issue increased disillusionment with the long-standing alderman, said that residents need to keep the pressure on city officials to transform the Southeast Side’s economy.

“Our voices put the bulk handling materials [ordinance on the books], we did that,” she told the crowd. “This is our home, this is where we live… We’ve got to keep pushing, making sure we get the neighborhood that we want.”

A coalition of environmental and community groups filed a 45-page comment on the proposed rule changes, calling for much more rigor and clarity on dust control, monitoring, enclosure and other requirements.

Ultimately, the groups called on the city to use its zoning authority to change how land is used and to “separate bulk material storage and handling from where people live, worship and play.” Since the petcoke piles were eliminated, the company KCBX — a Koch Industries subsidiary — still transfers petcoke from rail to trucks.

“We do have anecdotal evidence from community members that the petcoke problem is not solved,” said Meleah Geertsma, senior attorney for the Natural Resources Defense Council. “They continue to have black dust on their homes, likely because there are still thousands of tons coming in via uncovered rail cars parking at the site and being unloaded there.”

Instead of existing and new polluting industry, many want to see solar farms and renewable energy-related light manufacturing on the Southeast Side.

Long-time resident Gina Ramirez hopes the state’s 2016 energy law, the Future Energy Jobs Act, will mean that clean energy is a viable economic option for the Southeast Side. Her husband is enrolled in a solar installation training course, part of the new training programs rolled out under FEJA and specifically targeting environmental justice communities.

“There’s no reason we can’t have a solar farm or green industry, like building wind turbines,” she said. “This is an opportunity to invest in our blue-collar history, to be a neighborhood supplier” of solar technology.

Benito Herrera is a Southeast Side native and resident who works as a substitute teacher in nearby East Chicago, Indiana — a community designated a Superfund site and national cleanup priority for the levels of lead left by smelters and other industry. He’d also like to see wind and solar-related industry on the Southeast Side.

“This is not an affluent area, these things always happen in areas where people can’t fight back,” he said. “You have to start somewhere, that’s the monitoring. Then you hope it comes to the point where what they see in the monitoring means those things have to go.”

Herminia Vanna grew up in the Bush neighborhood of the Southeast Side, one of few Mexican families in a white ethnic enclave. Her father worked in the nearby (since-closed) steel mill and died of cancer that she attributes to pollution. She’d like to see “green jobs” and neighborhood tours showcasing the area’s industrial history and opportunities for transition.

She recently got more involved in community activism after retiring from the city’s health department, where she worked as a community liaison.

“We need industry but not at the risk of losing our health,” she said. “We’ve been lied to so much, going like sheep to the slaughter. But we’re waking up. We deserve better.”