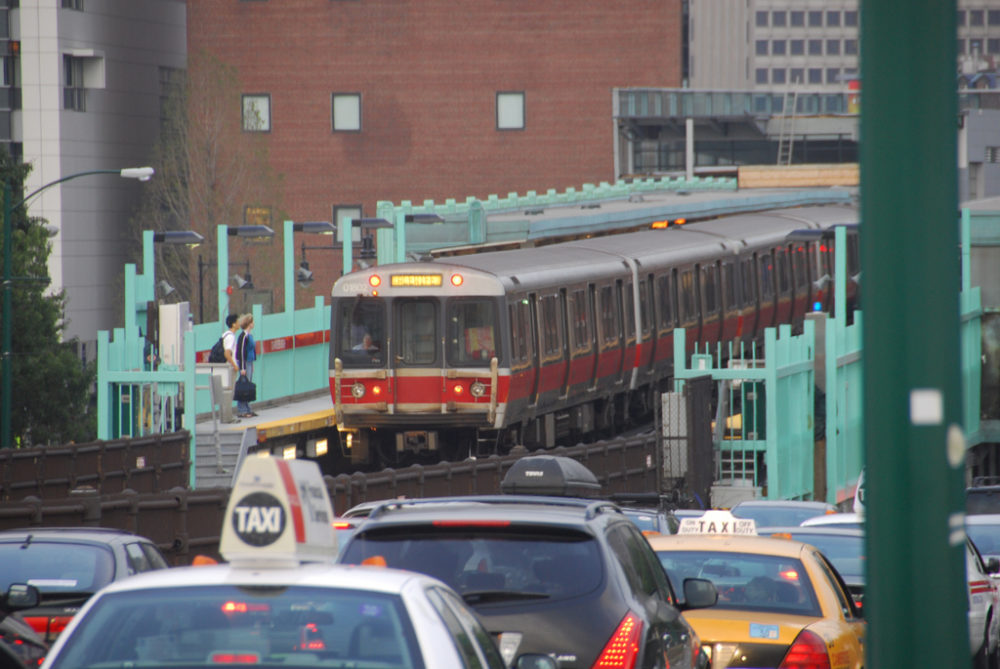 Some advocates say revenue from a carbon trading program for transportation in the Northeast could be used to support mass transit.

Massachusetts might be on the verge of becoming the second state to introduce a carbon pricing program aimed at the transportation sector – if lawmakers can agree on how to do it.

Last month, the state Senate unanimously passed an omnibus clean energy bill that includes a provision to create a market-based mechanism to reduce emissions from transportation sources. Meanwhile, Rep. Jennifer Benson is gathering support in the House for a more narrowly focused bill that would implement a carbon fee on petroleum, as well as natural gas and coal.

It remains to be seen whether either will clear both chambers before the legislative session ends in a few weeks.

“The likelihood of any of the bills in the legislature passing by July 31 diminishes by the day,” Benson said.  “But there’s definitely momentum – we’ve been building momentum all this session.”

The only state thus far to implement a carbon pricing system that affects transportation emissions is California, which has operated a cap-and-trade program for fuel distributors since 2015. Ontario and Quebec also have similar systems.

In Massachusetts, a 2008 law known as the Global Warming Solutions Act calls for the state to reduce its greenhouse gas emissions to 80 percent below 1990 levels by 2050. Currently, transportation is responsible for 40 percent of carbon emissions, making the sector the largest polluter in the state and the clear target for efforts to hit the mandated reduction goals.

The Senate bill would call for the executive branch to develop a program by the end of 2020, but leaves it to the administration of Gov. Charlie Baker to decide whether to pursue a carbon fee, a cap-and-invest system, or another option entirely.

This requirement could dovetail with efforts the state is already making. Massachusetts is part of a group, including seven northeastern states and Washington, D.C., that has started discussions about developing a cooperative system to reduce transportation emissions, a collaboration that would likely meet the requirement laid out in the Senate bill.

Though the potential partnership is still in the early stages, participants point to the example of the Regional Greenhouse Gas Initiative, or RGGI —  a market-based program that caps carbon emissions from power plants and requires generators to pay for their share of the allowed pollution. The revenue is used by individual states to fund efforts including energy efficiency programs, renewable energy projects, and greenhouse gas abatement.

Sen. Marc Pacheco, one of the leading advocates for the Senate bill, sees promise in this model.

“It would be very easy and simple for everybody to look at a RGGI for transportation,” he said. “That certainly will be up to the governor to decide what way we should be going.”

Taking a different approach, Benson’s bill would charge a fee – initially $20 – for every metric ton of pollution created by the burning of fossil fuels. In the case of gasoline, this charge would add about 16 cents per gallon at the pump, Benson estimated.

Of the revenue generated, 80 percent would be returned to consumers and businesses as cash rebates and the remaining 20 percent would fund further climate change mitigation projects. The rebates would be weighted by income, giving more to those in lower income brackets; they would also be higher in rural areas without access to public transit. Furthermore, at least one third of the money invested in green projects would go to underserved communities.

Even with the uncertainties surrounding the pending legislation, clean energy advocates said they are encouraged by the bills and the appetite for change they signal.

Jordan Stutt, director of the carbon program at the Acadia Center, a Boston nonprofit that promotes clean energy solutions, is glad to see the discussion focusing on ways to invest carbon pricing revenue to needed projects. Even a charge of $10 per ton on transportation-related carbon emissions would generate close to $300 million, much of which could be used for much-needed improvements in the state’s transit system, he said.

“It’s not enough to completely replace the need for other funding, but it’s enough to make some real progress,” he said.

For policy analyst Daniel Gatti of the Union of Concerned Scientists in Cambridge, Mass., the fact that the Senate bill could help usher in a cap-and-invest program is particularly heartening. The success of RGGI, he said, demonstrates the feasibility of a regional system.

“We really see expanding that model into transportation as an important step for the region,” Gatti said. “There’s a certain logic to working with this program model that’s worked before.”

With the end of the legislative session looming, the future of the two bills is unclear, but lawmakers and advocates alike are optimistic that a carbon pricing solution will emerge.

If her bill does not succeed this session, Benson plans to refile as soon as the new session convenes in January 2019; she said she is close to achieving majority support from her fellow House members. Pacheco expressed confidence that the clear need to reduce emissions will inspire action from legislators. And with the combination of legislative efforts and the regional discussions the state is already undertaking, a successful plan seems very possible, Gatti said.

“We think we’ve got a pretty good chance of putting something together,” he said.