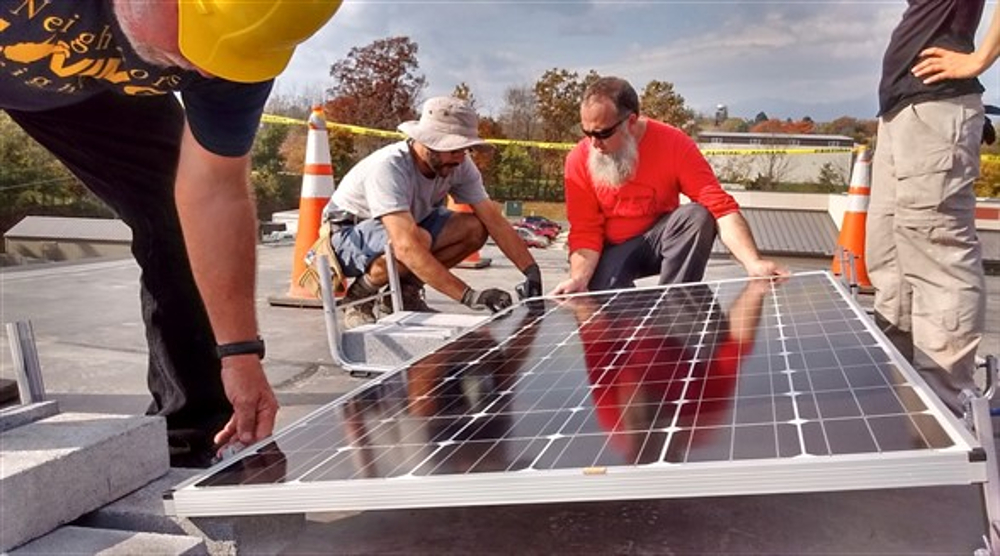 Tim Godshall and Hugh Stoll set the first panel in preparation for a solar "barn raising."

A barn raising is an old tradition here in the Mennonite country of Virginia.  When a farmer needed a new barn, all the neighbors would join in, with many hands making light work.

So when Jeff Heie put out a call to the Mennonites of the Shenandoah Valley for help putting solar panels on the Gift & Thrift store in Harrisonburg, the response was strong.

“Mennonites have a long and rich history of community-based mutual support,” he says. “The concept of barn raisings is known by most Mennonites, especially those with Amish heritage.”

Heie is a local carpenter, active in the Mennonite church, who is volunteering as the project coordinator for the Gift & Thrift solar project.

The Gift & Thrift in Harrisonburg is one of more than one hundred thrift shops run by the Mennonite Central Committee (MCC) in Canada and the United States. Since 1972 they have raised more than $200 million to support domestic and international aid programs by the MCC.

In addition to the thrift shop, the Harrisonburg complex of buildings hosts an artisan gift shop, a bookstore, a café, and a community center.

To bring solar to the Gift & Thrift, the store and the MCC teamed up with local solar installer Secure Futures to create the “Thrifty Solar Barn Raising” team. They were one of over 170 teams nationwide selected to compete in the US Department of Energy’s Solar In Your Community Challenge, a $5 million contest that supports “innovative and replicable community-based solar business models and programs that will bring solar to underserved communities.”

The first part of the project, with 67 kilowatts of capacity, were installed by 30 volunteers in November 2016, overseen by Secure Futures Solar, a Staunton, Virginia company that specializes in solar for schools, hospitals, and non-profit organizations.  They installed 160 solar panels in just a few hours.  Many of the volunteers were from the Carpenters Guild, an association of area carpenters who donate their time for community projects, such as repairing low-income homes.  They made ideal volunteers, since they were handy with tools and comfortable climbing on roofs.

Six months later, 50 volunteers, including 18 high school students, turned out to install the second phase of 150 panels.  It took only four hours.

Thanks to the volunteer labor, the total cost of the project was $170,000, or about $1.60 per watt, about a dollar lower than the national average.  The low cost will help deliver a simple payback in about 10 years. The 113 total kilowatts, wired up as two systems spread across four different roofs, produce about half the power consumed at the complex of buildings.  Secure Futures estimates the system will save $14,000 per year, with a total net savings of more than $300,000 over the life of the project. The performance of the two systems can be seen in real time here and here.

Funding came from multiple sources, including community donations, a Go Fund Me campaign, and contributions from a local Voluntary Gas Tax that has raised funds in Harrisonburg since 2000. Contributions help accelerate the payback and direct more of the savings to supporting the MCC mission of global relief. To take advantage of federal tax incentives, Secure Futures arranged an equity investment.

Additional help came from the Energy Department’s Solar in Your Community Challenge. Along with some seed funding, the Challenge provides technical assistance in areas such as engineering and legal, and the opportunity to compete for cash prizes.

How it fits with Mennonite culture

Although solar power is a quintessential 21st century technology, it seems to fit in perfectly with Mennonite principles and traditions that are centuries old.

Mennonites wrote to the Pennsylvania legislature in 1775, “It is our principle to feed the hungry and give the thirsty drink; we have dedicated ourselves to serve all men in everything that can be helpful to the preservation of men’s lives.”

They continue to put a high priority on service to the community and to others around the world. “We believe that we can live life simply and in service to others as a witness to God’s love for the world,” according to the Mennonite Church USA materials.

Mennonites are sometimes confused with Amish people, since both trace their history back to the same common ancestor – Anabaptism, a 16th century break from both Catholicism and Protestantism. While present-day Amish shun the trappings of modern society and technology, foregoing cars and telephones, Mennonites don’t.

“Instead of withdrawal, modern Mennonites found in witness and service a new way of interacting with the world,” according to the Church.  “We believe that we can live life simply and in service to others as a witness to God’s love for the world.”

Mennonites are also one of the three traditional “peace churches,” along with Quakers and Church of the Brethren. Their pacifist views put a strong emphasis on avoiding conflict and reducing the drivers of conflict around the world, such as poverty.

Heie, who was not born into the faith but was “convinced” by it, had a personal revelation about the role of energy in conflict.

He was studying conflict resolution in graduate school when the second Gulf War broke out, partly motivated by conflict over oil in the Middle East.  “I realized that energy can be a source of conflict,” he says. “As a Mennonite, we need to minimize conflict over energy, so renewable energy was a natural way to do that.”

Living in Arizona in 2006, he put solar on his own home.  “I was thrilled with the concept of turning on the lights and knowing the power was coming from the sun,” he recalls.  “It kind of blew my mind, and I’ve been a big proponent ever since.”

“It’s such an elegant solution to a world problem.  We have an abundance of sun and if we harness it we don’t have energy problems, they disappear.  It seems like a no brainer.”

So when he and Tim Godshall, who serves on the board of the thrift shop, brought up the idea of solar power as a way to support the Mennonite Central Committee’s world relief mission, it resonated on many levels.

“It was kind of a perfect marriage,” Heie says.

“This partnership is an opportunity for us at MCC to live out our commitment to acting sustainably and caring for creation,” says Bruce Campbell-Janz, executive director of the Mennonite Central Committee East Coast chapter.

“Using solar energy is a faithful response to the climate change realities we see around the world, where droughts and other effects of changing weather patterns really can be disastrous to people we partner with — particularly people living in poverty,” he says.

The thrift store made the perfect vehicle for raising money for relief, for fighting climate change, and for tapping the volunteer spirit of the community. “The Gift & Thrift is unique because all the profits go to the MCC,” says Heie.  “Mennonites are big supporters. We knew we could get financial support from locals as well as a lot of volunteers. There is lots of good will toward the Gift & Thrift.”

Heie hopes the Harrisonburg project will inspire other Gift & Thrift operations around the country, plus Amish and other religious groups that do relief work.  “It seems like a good thing for Mennonites to do, to pass along the knowledge of how to fundraise and do the projects.”