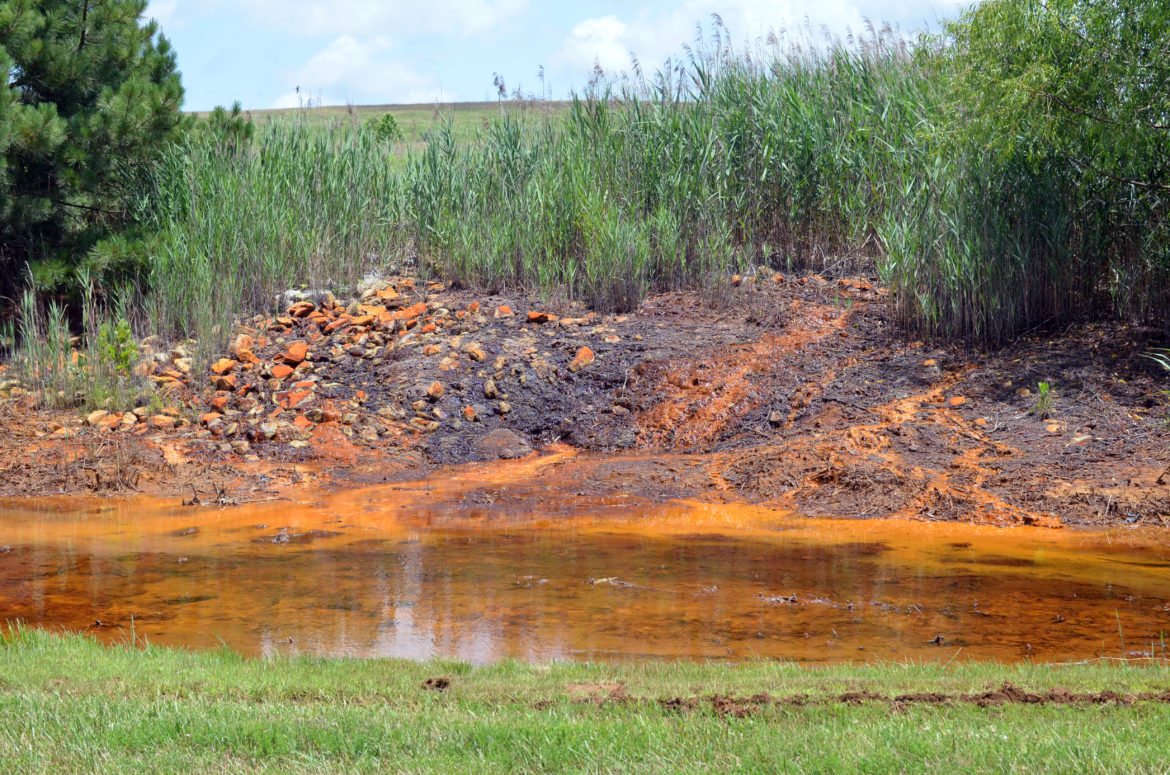 Pollution that appears to originate from nearby reclaimed coal mine waste piles seeps into the Sahara Woods State Fish and Wildlife Area, which was opened on a rehabilitated strip mine.

Nearly three decades after a southern Illinois coal mine was abandoned by its owner, state regulators have still been unable to access the hundreds of thousands of dollars that was supposed to be set aside for environmental cleanup.

Coal mining companies are mandated to put up reclamation bonds prior to breaking ground. Often the bonds are guaranteed by a bank or insurance agency to make sure money is available for cleanup if a company abandons its mine.

Failures in the system, though, mean that bond money is sometimes nowhere to be found when it’s needed. In several instances in recent years, banks holding bonds in the form of letters of credit or certificates of deposit have fought back when states sought to collect on them.

That’s what happened with Majestic 14, a 185-acre coal mine in Perry County, Illinois that was abandoned after its permit expired in 1989. Reclamation of the operation, mined by the now defunct Surefire Coal, was guaranteed largely by a single bond worth more than $320,000. After Surefire forfeited the permit, the Illinois Department of Natural Resources (DNR), which regulates coal mining in the state, waited until 2005 to attempt to collect the bond.

The bank that guaranteed the bond at the time declined to pay up, instead taking the state to court. Although the case was dismissed in 2014, that institution, Union Planters Bank, has since been acquired by another bank, further complicating the state’s attempts to access the funds.

According to a spokesperson from the Illinois Attorney General’s office, the matter was referred to the agency’s revenue litigation bureau in 2015. Three years later, the state continues to review potential paths forward to determine if there is any way to secure the money and clean up the mine.

A recent site visit showed reclamation far from complete at the permit area, which is situated among numerous farms. While dirt covered the site, nothing more than a few weeds grew, and the area needed regrading. 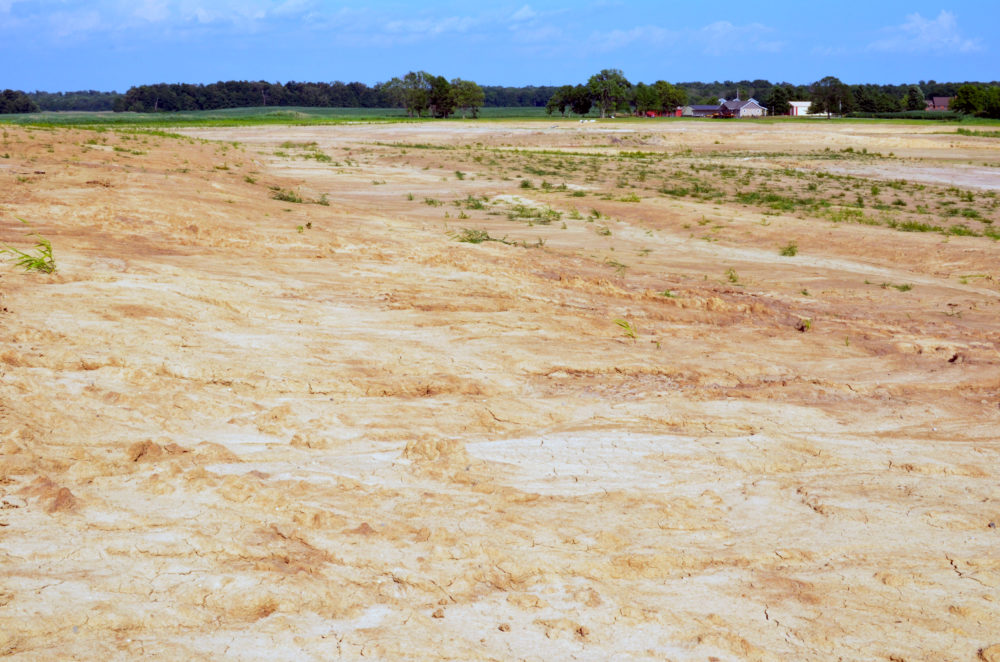 The site of the former Majestic 14 coal mine in Perry County, Illinois, where state officials have been unable to access reclamation funds nearly three decades after it was abandoned.

The DNR did not respond to questions about its attempts to retrieve the bonds.

This issue is not contained to Illinois. Although regulators from several other states said they were not currently fighting banks or insurance companies to retrieve bonds, experts said such cases can and do occur, especially as historical bank mergers lead to scrambled paper trails.

Joe Pizarchik headed up the Office of Surface Mining Reclamation and Enforcement during the Obama Administration. The office oversees coal mine cleanup nationwide under the Department of the Interior. He experienced similar cases stemming from mergers in which the purchasing bank “had no idea what they were buying” and ended up taking on coal reclamation liability without realizing it.

“Some of the big banks either aren’t paying attention or are willing to take their chances and figure the states aren’t going to push it and they won’t have to pay the money,” Pizarchik said.

In another Illinois case that was settled in 2008, the DNR sought bonds guaranteed by local banks for the reclamation of the forfeited Phoenix 1 mine, about 30 miles from Majestic 14, but the banks holding the bonds had changed hands in the interim. The DNR could not locate sufficient documentation to prove the bonds were enforceable, and the bank only paid once the Illinois Attorney General’s office became involved and threatened a lengthy legal process. Even then, the state accepted $100,000 on what were letters of credit guaranteeing $122,387.

A recent visit to the former Phoenix 1 mine found it had been largely reclaimed and converted to a clearing for bird watching, although a potentially dangerous open pit remained unfilled and collecting water. 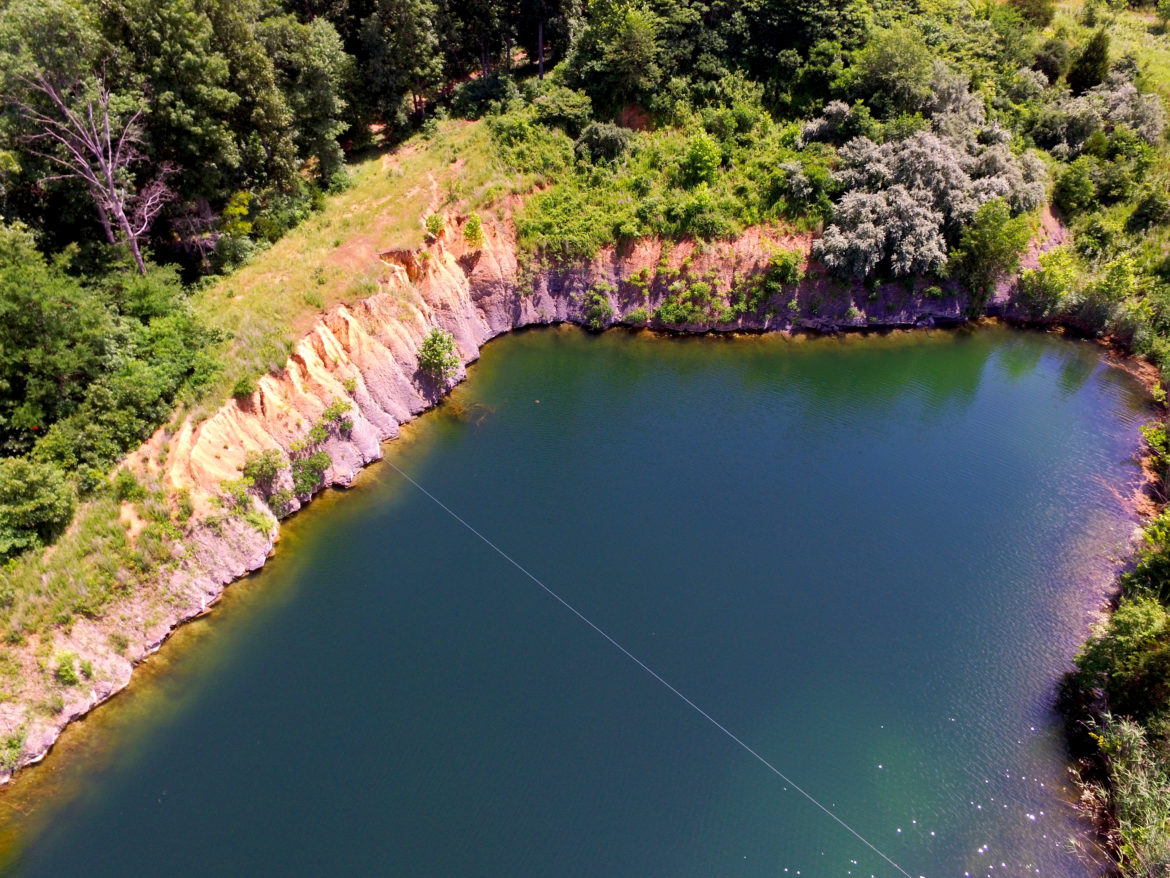 An unfilled pit collects water at the former Phoenix 1 coal mine in Illinois. The holder of a reclamation bond only paid the state after the attorney general’s office threatened legal action.

A recent, nationwide survey of reclamation bonds, supplemented by additional public records requests, found at least $160 million in financial assurances for coal mine cleanup were in the form of these letters of credit or certificates of deposit, although the true number is likely much higher due to states’ unstandardized reporting methods.

Pat McGinley, a law professor at West Virginia University, has worked on coal-related topics for 40 years. Individual cases such as Majestic 14 and Phoenix 1 are not the thing of sweeping precedent, he said, but if Illinois accepts less than the full bond amount, such decisions could be used to guide bond forfeitures in other states.

For their part, some residents in southern Illinois are simply tired of what they see as insufficient cleanup at the region’s coal mines. Sam Stearns comes from a mining family that for generations dug Illinois’ coal. Now, he is an activist working to remedy what he describes as “very minimal effort being made to reclaim our former coal-mined land.”

“The after-effects of mining are not the natural state of the land. Because I grew up in an area that had been mined, I just thought it was normal to have a lack of vegetation and no fish in the water,” Stearns said.

“This is not normal.”