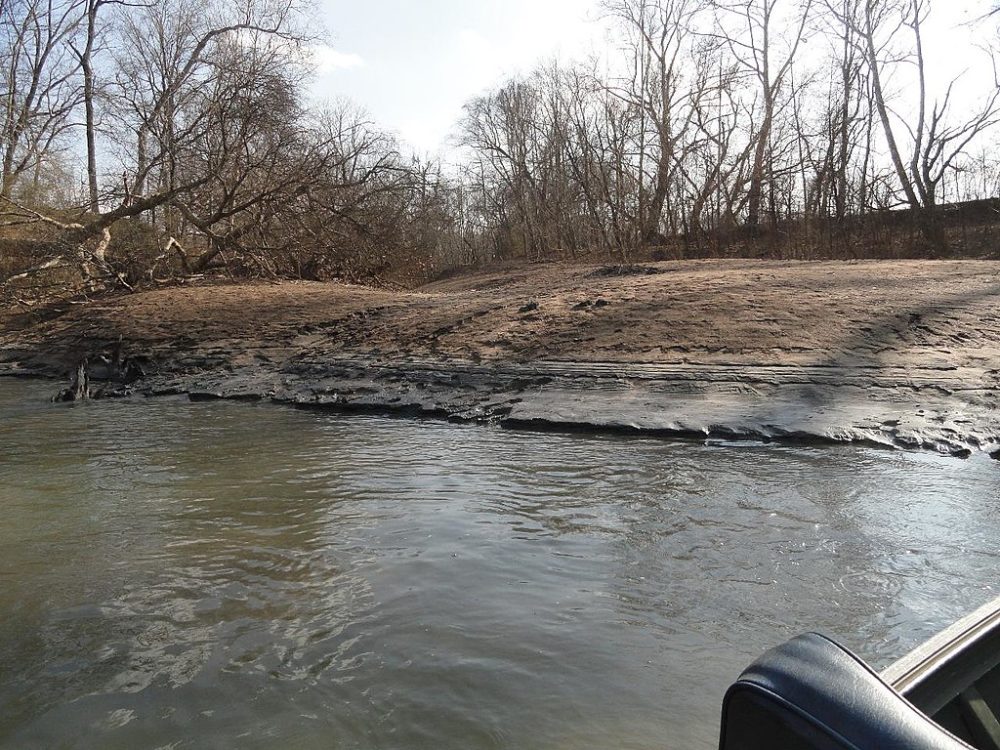 Coal ash deposits on the Dan River shoreline after a collapsed coal ash impoundment caused 39,000 tons of coal ash to spill into the river in 2014.

Georgia hopes to follow Oklahoma and become the second state to win federal approval to regulate coal ash disposal on its own.

“We’re working very diligently with the EPA to get a state-run program in Georgia,” says Jeff Cown, chief of the Land Protection Branch for the Georgia Environmental Protection Division.

The U.S. Environmental Protection Agency has regulated coal ash disposal since October 2015, following a devastating 2014 spill that sent 39,000 tons of toxic ash into the Dan River in North Carolina.

Last summer the agency announced it was open to delegating that authority back to states, and Oklahoma last month became the first to win approval under that program to manage coal ash at the state level.

Scott Pruitt, the former Oklahoma attorney general who resigned last month as EPA administrator, said at the time that the decision “places oversight of coal ash disposal into the hands of those who are best positioned to oversee coal ash management: the officials who have intimate knowledge of the facilities and the environment in their state.”

Coal-fired power plants produce 110 million tons of coal combustion residuals (CCR) a year. Georgia generates 6.1 million tons annually, and since 2015 it has also accepted nearly 7 million tons in total of coal ash from other states. Depending on where the coal is mined, it can contain a host of heavy metals including arsenic, lead and mercury that can leak into water supplies.

Cown said Georgia residents won’t need to worry about that risk if the state’s application is accepted. “Our regulations will be equal to or even more protective than the federal EPA rules, which currently run over 500 pages.”

But environmental groups say it’s too soon to know what impact a shift to state regulation would have because of a lack of transparency and time for public comment in the application process.

“Delegated programs are very common under the EPA,” said Lisa Evans, an attorney specializing in hazardous waste law at Earthjustice, a nonprofit environmental law organization. “But I don’t know of another major delegated program that doesn’t take steps to guarantee a meaningful public role in establishing regulations.”

Evans said there are ground rules on what an application should look like, how to post that application and what the public participation rules will be. “The EPA skipped those steps with coal ash. They were in such a hurry under (former EPA Administrator Scott) Pruitt to approve state programs.”

In order to view Georgia’s application, which was submitted in April 2018, EarthJustice had to file a Freedom of Information Act request. The group only received access to the 387-page document this month.

“This will take many weeks to review,” Evans said. “The application process for state coal ash programs is being conducted behind closed doors. These materials should have been made available for the public to review in a timely manner.”

An EPA guidance document in August 2017 outlined six provisions that would allow states or EPA the ability to incorporate “flexibilities” into their coal ash permit programs. These kinds of documents alert the public to how a rule might be implemented or enforced.

Citizens and environmental groups were given 30 days to comment on the guidance document, Evans said. “We asked for 60 days and they agreed,” she said, “but on the 29th day, as I was leaving the office, I got a call that they had rescinded the extra time and I had until midnight.”

Earthjustice and other advocacy groups protested and took the full 60 days anyway, she said. The EPA later agreed to include the comments.

Meanwhile, the agency is revising the 2015 federal rules, finalizing the first phase of changes last week. The revisions allow states to suspend groundwater monitoring in some cases. They also allow state officials rather than professional engineers to offer technical certifications, and to delay compliance dates for the closure of leaking coal ash ponds and ponds within five feet of groundwater.

If Georgia and other states are approved to regulate coal residuals, Holleman said, it may be more difficult to enforce regulations. Under the current law, coal ash is not defined as hazardous waste, but citizens and environmental groups can sue utilities in order to require them to comply with regulations.

“Right now, a citizen can file a notice of intent to bring a lawsuit. There is a 60-day waiting period. If the utility does not act within 60 days to enforce the regulations, then the citizen can file an enforcement action in the district court,” he said.

Once a state agency is in control, Holleman said, the process will be more onerous and costly. If state agencies write an inadequate permit that does not contain protections, citizens will have to contest it through a state administrative law proceeding. “They will have to do that before they even start trying to enforce the law against the utility,” Holleman explains, “and there may be years of free pollution and violations.”

At Oklahoma public meetings in 2016, Department of Environmental Quality official Jeffrey Shepherd noted that the department “has been told by industry that complying with the state rules may offer some protection from citizen suits.”

“All coal ash ponds and landfills leak hazardous chemicals,” she said. “Thus Georgia, and every state, must regularly re-examine coal ash disposal permits to determine whether dump sites are being operated in a safe, protective and responsible manner.”

Cown said the state would have authority to revoke a permit if a utility is noncompliant. “Rule making is always a balance between protection and cost, and we believe we’ve offered a balanced rule.”