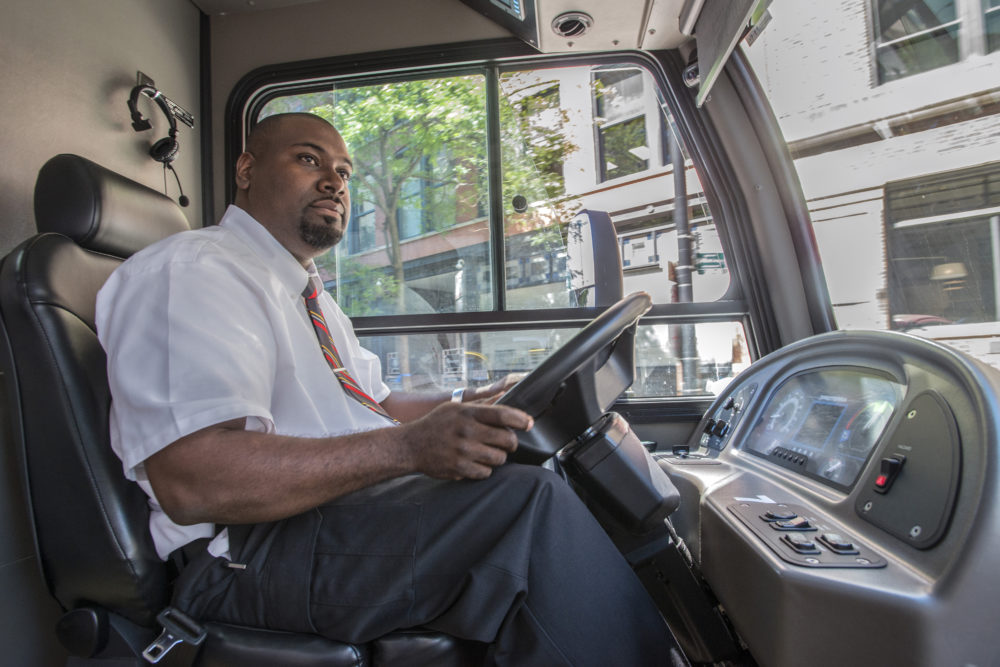 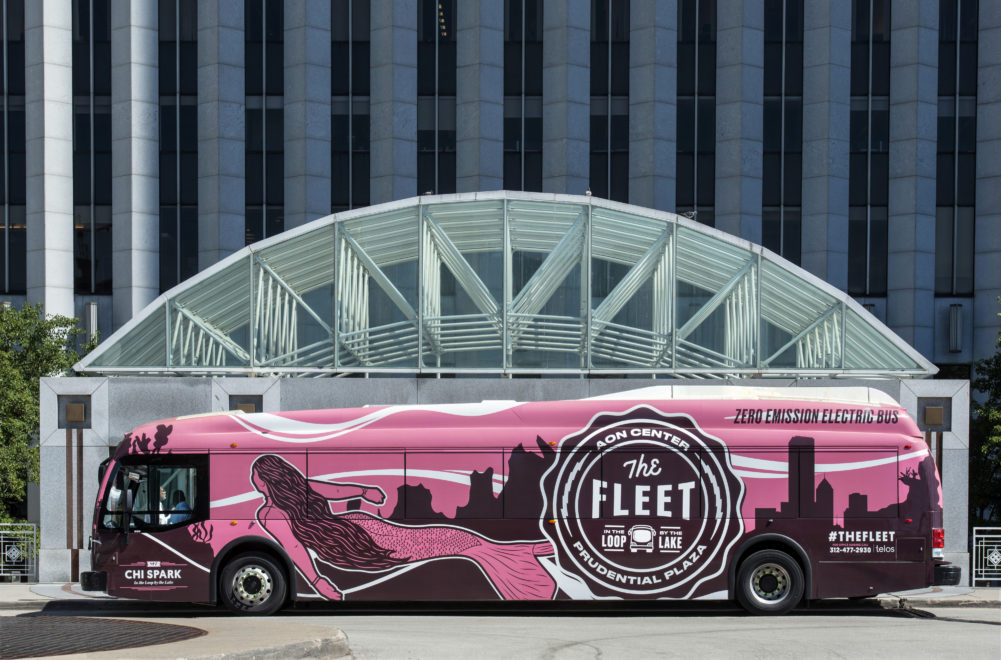 JLL's electric shuttles is wrapped with a sea creature decal, a word play off of bus 'fleet.' The buses are manufactured by Proterra. 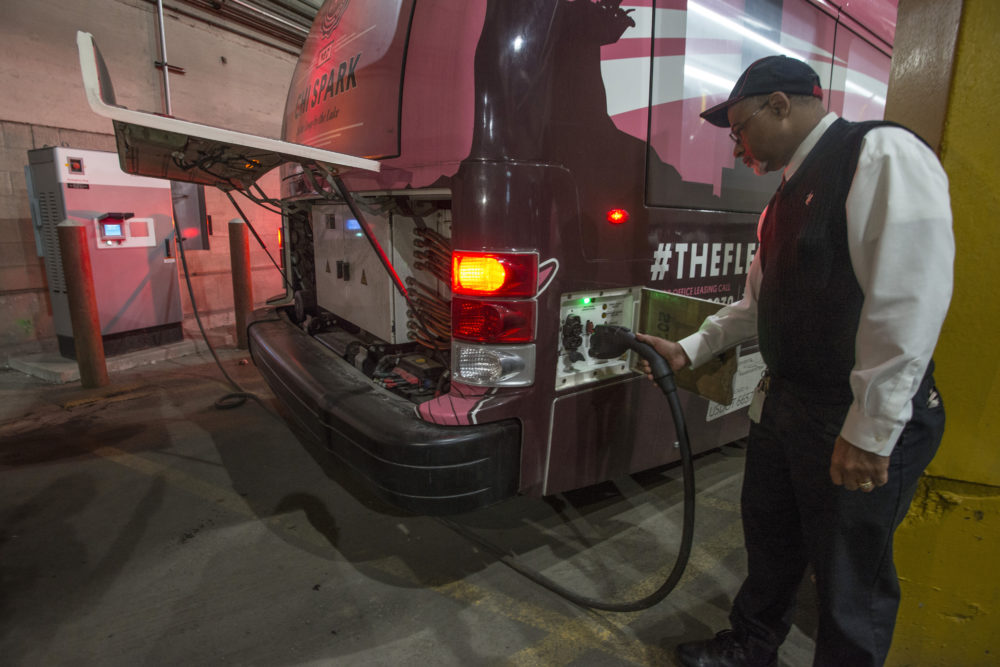 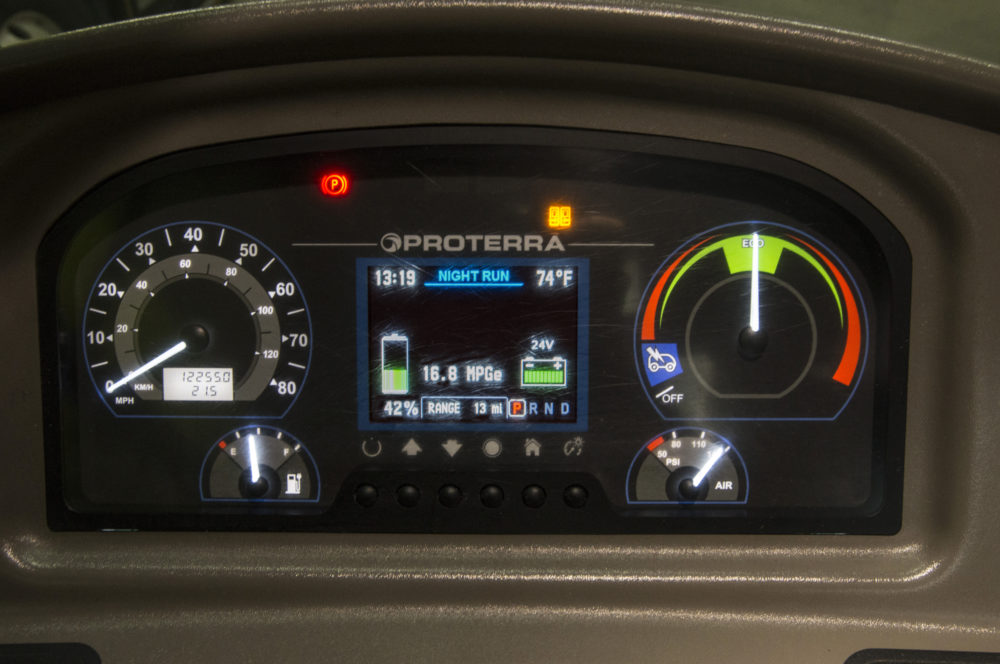 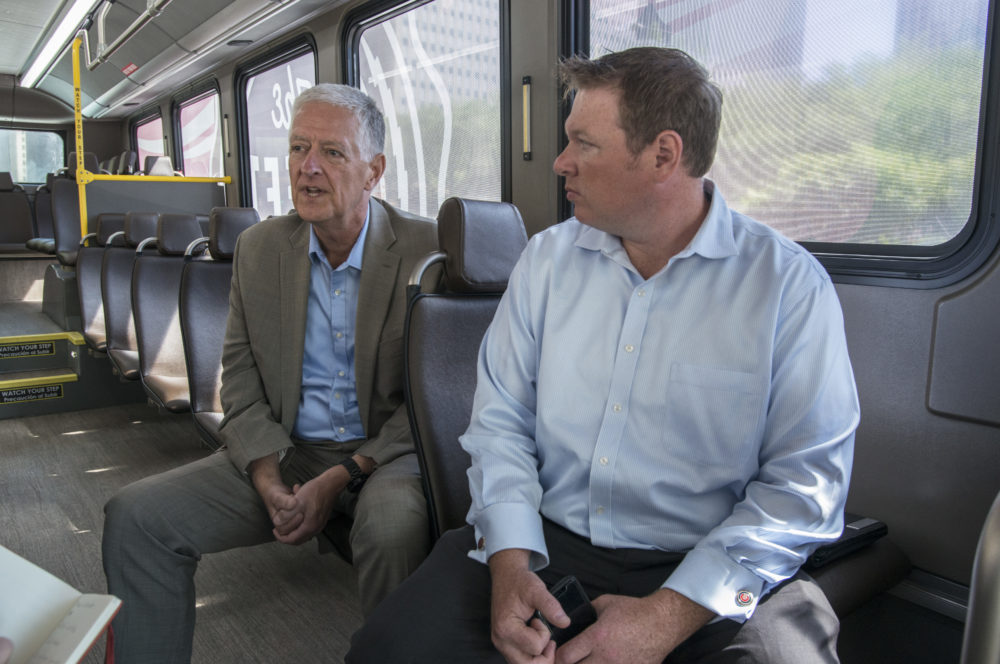 Ralph Adamson, JLL’s assistant GM for the Aon Center (left) and Don Jones, the regional manager of SP Plus, ride on one of 10 buses in the first electric shuttle fleet in the U.S. 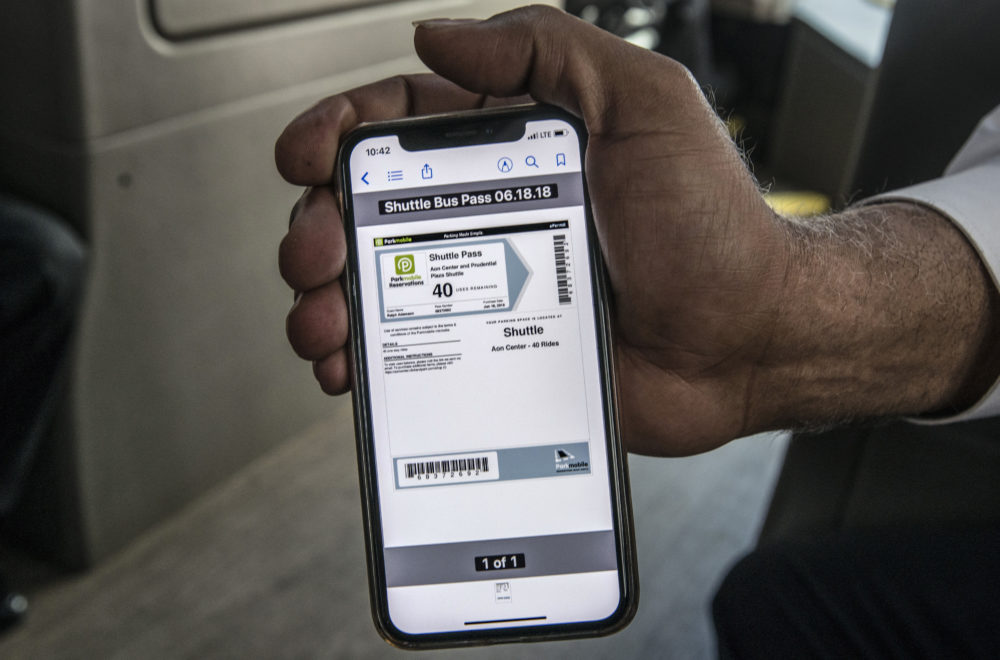 People that work in the Aon Center or Prudential Plaza can download bus tickets onto their phones or print them out.

The manager of the nation’s first all-electric shuttle bus service talks about operating electric buses in a cold climate like Chicago.

In October 2016, real estate firm JLL and bus manufacturer Proterra launched a downtown shuttle bus service using the country’s first fully electric bus fleet. Two years later, the companies are proving that electric buses can work in a cold-climate city like Chicago, though not without some adjustments.

The buses shuttle hundreds of commuters every workday from Chicago’s Metra train stations to the Aon Center and Prudential Plaza (JLL manages both buildings), then back again at the end of the day before parking underneath Wacker Drive to quietly charge overnight.

“If you can do it in Chicago, you can do it anywhere,” said Ralph Adamson, JLL’s assistant general manager for the Aon Center. “We can have a 30-degree swing in a 24-hour period, and we catch extreme weather on either end.”

JLL executives say its tenants, which include Millennium Park, the Art Institute of Chicago, the Goodman Theatre, and Chicago Symphony Center, are increasingly asking for more transit options to make their commutes easier. A survey found 90 percent of tenants’ employees don’t drive to work.

The benefits of electric cars are enhanced in a shuttle bus. Diesel buses make only a few miles per gallon — Proterra’s estimate is 3.9 mpg for a typical bus — while electric buses run off of a battery charge. Electric motors have the low-speed torque without the loud chugging of a diesel bus. Plus, the fixed route and schedule reduces the anxiety of running out of power and, one day, could open the door to vehicle-to-grid charging, a potential extra revenue stream from allowing utilities to use an idle bus battery as a grid resource.

The shuttle buses, which were funded in part by Drive Clean Chicago, a city-sponsored incentive program to encourage alternative fuel vehicles, saved 12 million metric tons of emissions in 2015, according to Proterra. Every month, efficiency data is uploaded to Proterra for review.

The Energy News Network recently sat down with Don Jones, a regional manager for SP Plus, the company hired to operate the shuttle service, to ask what lessons he’s learned and what advice he has for school districts and transit agencies that are looking at electric buses. 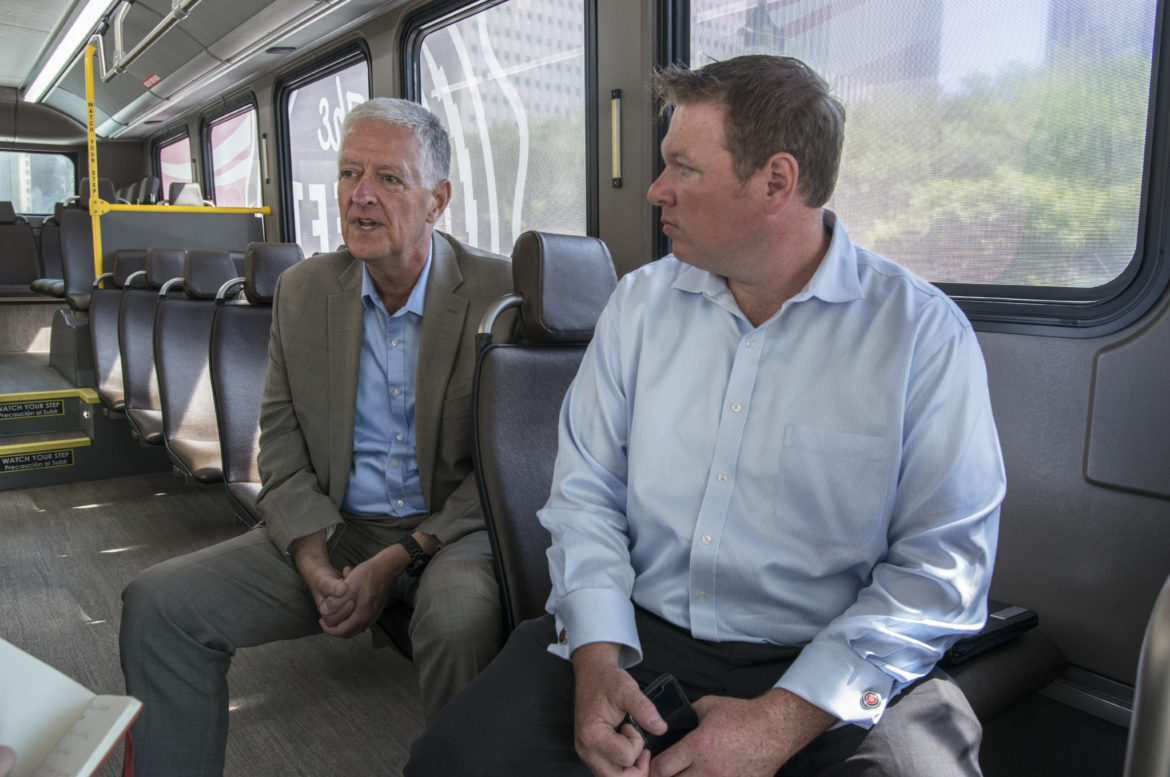 Ralph Adamson, JLL’s assistant GM for the Aon Center (left) and Don Jones, the regional manager of SP Plus, ride on one of 10 buses in the first electric shuttle fleet in the U.S.

Q: What has surprised you about running an all-electric fleet?

There was a big learning curve when we first launched. Really on the driving habits. All of our drivers are seasoned and used to driving diesel buses. The sounds, everything that goes into driving a regular vehicle. The electric bus doesn’t make any noise at all. The braking is different, too. It has a regenerative factor. As you let up on the accelerator, the regeneration goes into effect – it creates power to go back into the battery. You are recharging power as you go along. We found that when you engage the brakes, it stops that.

We launched in December of 2016, the coldest months of the year. Just like any battery, the cold drains the power. We ended up having to retrain all the drivers on their habits. You’ve got to let it regenerate. It will stop itself, just through the regeneration friction. You don’t have to use the brakes at all, and when you do use the brakes, they were not getting the power back into the battery. It was making it hard for us. That was a bigger hurdle with the drivers and training. Now when we bring on a new driver, it’s a full two weeks of training before they are on the road.

Q: Have you had a bus run out of power?

No, no, no, we’ve never had a bus run out of power. But we were coming back-in, limping in, so to speak, at less than 10 percent energy that first month or two. Sometimes we are supposed to do 4 or 5 runs per bus, and some buses were only able to get in 2 or 3. Now, we come back in in the colder months and we are at 25 percent power and able to make all the runs without issue.

Q: Chicago Transit Authority is buying a new fleet of electric buses. What would you tell the person that has your job with CTA?

CTA is going to utilize their fleet different from ours. These buses are designed to be charged from the roof. Proterra makes these depots that the bus pulls in as comes to a bus stop, and it gives it a quick charge and it keeps on going. We have the regular car charging type equipment, except supersized. It’s like a washing machine sized, and it throws out 440 volts.

You have to have the land for that, and then you have to look at your range. A lot of the local transportation companies, they keep the bus yards on Chicago’s Far South Side, some come from Indiana. You can’t do an electric fleet from there, because by the time you get into the city, you are out of power.

After this launched, there were a bunch of buildings that were interested in an electric operation, but they quickly realized they didn’t have the infrastructure to be able to support something like this. Your starting point needs to be close. The buses need to be close to where you are going to end up. These buses have a range of 40 miles, and my route is 36. There is very little margin of error.

Q: Have you ever considered vehicle-to-grid charging?

If we started putting power back into the grid – at least during the day – my fear would be that the bus would go out at 70 percent. One concern: I wouldn’t be able to meet the expectation of the service that I’m trying to provide. Another concern: we push it to meet that expectation and the bus runs out of power, and now I have a bus stuck on the road. Only a tow truck could help me at that point, unlike a fossil fuel vehicle that you can just bring gas. It would have to be something that we’d look at in the off hours – overnight and on the weekends when we are not in service. 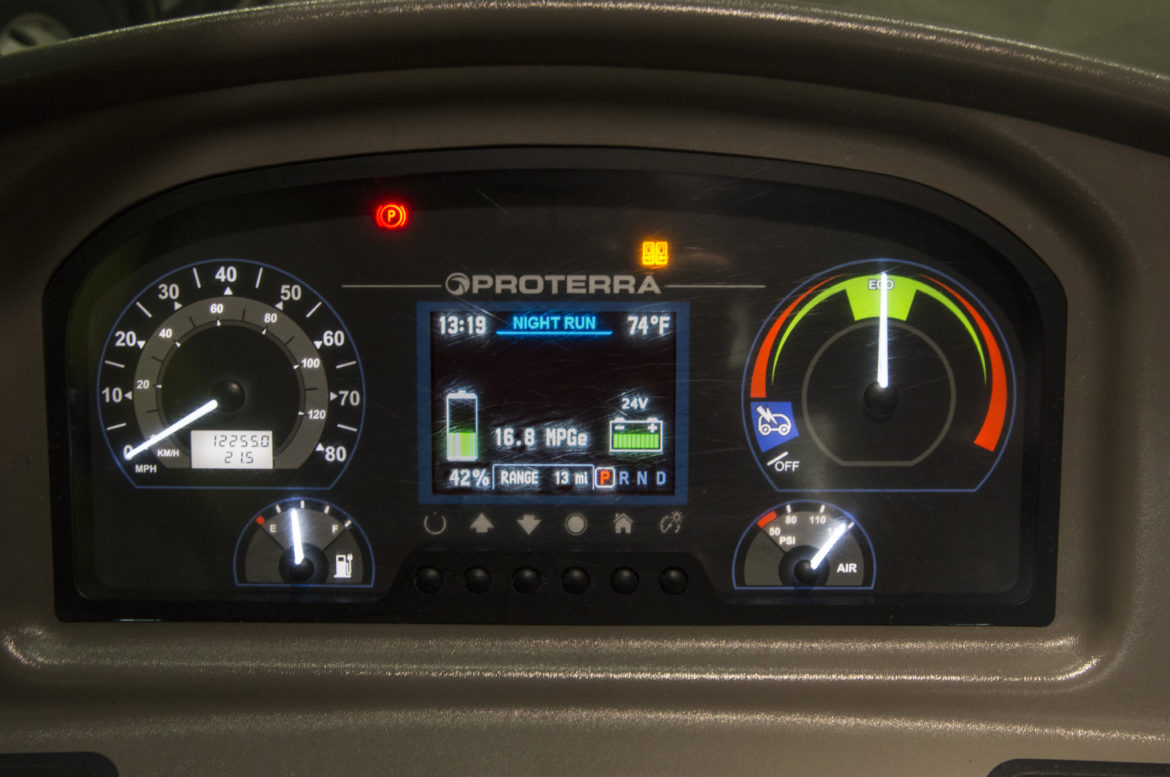