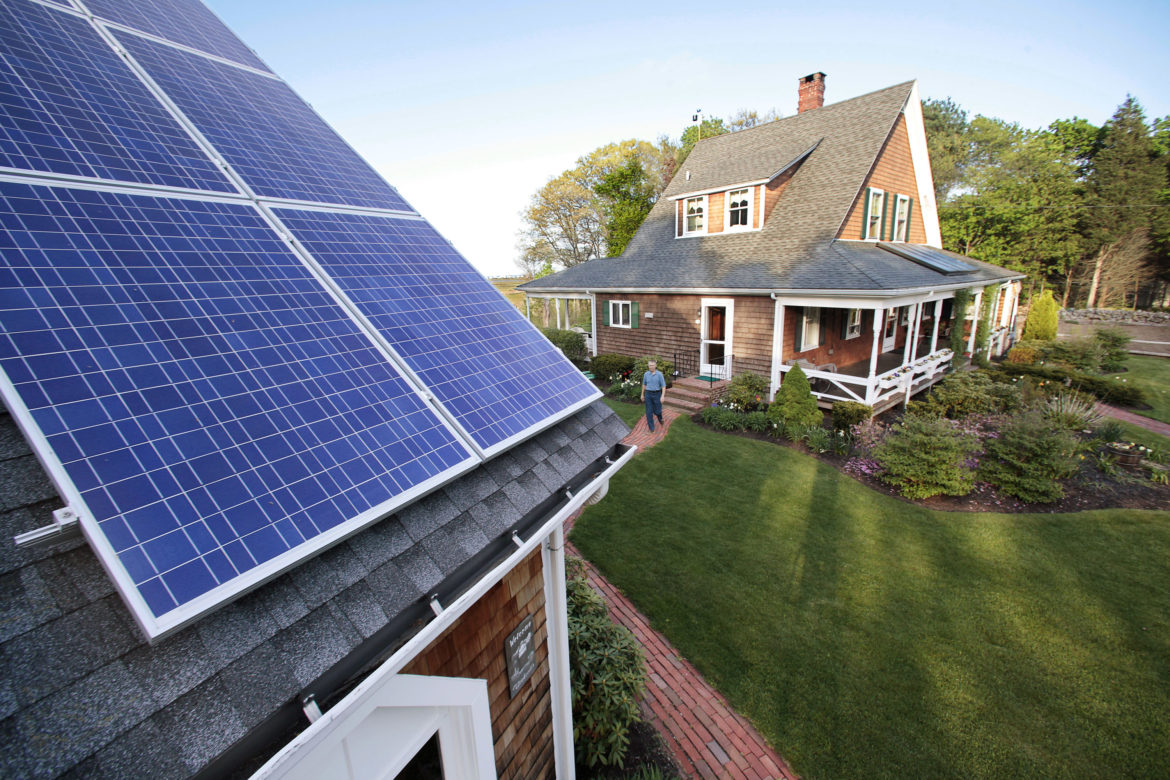 Solar panels on a home near Marshfield, Massachusetts.

Solar energy advocates are fighting a plan by utility giant Eversource to charge a variable monthly fee to Massachusetts customers generating their own power.

With less than two days left in the state legislative session, opponents of the fee are hoping lawmakers pass a measure to stop the new charges before they take effect at the end of the year.

“It is unfair, it’s confusing, and it’s not going to help our electric system,” said Sean Garren, a senior director for nonprofit advocacy group Vote Solar. “It hurts the economics of choosing to go solar without any strong data-driven reason.”

Eversource, meanwhile, contends that the fee is an equitable way to ensure households with solar power pay a fair share of the cost to maintain the electric distribution system.

“We have to have the equipment on our system to meet their needs, regardless of how frequent or infrequent their need is,” said Eversource spokesman Michael Durand.

At issue is a charge known as a monthly minimum reliability contribution, or MMRC.

Households that have solar panels or other small power generation facilities generally take advantage of net metering, a provision that allows them to offset their overall energy use by selling excess electricity back into the grid. The result is much smaller power bills each month.

Utilities argue that because net-metered customers are paying less on their bills, they are therefore contributing proportionally less to the upkeep of wires, transformers, and other electric distribution infrastructure. The MMRC allows utilities to use a monthly fee to change how these costs are spread out across their customers. A provision in a 2016 solar energy bill authorizes utilities to implement MMRCs.

Solar proponents, however, argue that rooftop solar provides other benefits to the grid, such as cutting daytime demand and reducing the need for new generating capacity, and that in many cases solar customers are actually underpaid. A 2015 value of solar study in Maine placed the overall value of distributed solar generation in that state at twice the retail rate for electricity.

Advocates also note that the utilities’ argument, known as cost-shifting, hasn’t been applied in other cases in which customers pay less, such as temporary vacation homes that use energy seasonally but still require a year-round connection.

How the charge will work

In January, the Massachusetts Department of Public Utilities approved Eversource’s plan for an MMRC in the form of a demand charge. A demand charge is a fee based on a customer’s peak demand on the local grid in a given month; the exact sum can vary from month to month as a customer’s needs or power usage behaviors change.

Demand charges are common in the commercial sector, but are untried in the residential market. In recent years, power companies in nine states have attempted to impose demand charges specifically on residential solar customers, according to information collected by the Alliance for Solar Choice, a coalition of solar companies that advocates for adoption of rooftop solar; five requests were rejected by regulators and four companies withdrew their petitions.

Eversource’s approved plan will apply this charge to customers who install solar generation systems on or after Dec. 31, 2018. Existing solar facilities and low-income customers will not be subject to the fee.

The utility estimates the charge will add an average of $10 to the typical bill, though opponents say that number doesn’t tell the full story.

“The numbers are really very generic,” said Evan Dube, senior director of public policy with solar company Sunrun. “That number will vary widely depending on any given consumer and their usage.”

Eversource, which serves 1.2 million residential electric customers in 140 Massachusetts communities, argues an MMRC is necessary because its non-net-metered customers are now unfairly subsidizing distribution costs for households that are net-metering, Durand said. Furthermore, he said, it makes sense to base an MMRC on a customer’s peak demand because the delivery system must be robust enough to accommodate the largest strains placed upon it.

“A demand charge is a way to charge them their share of the cost of the significant maintenance and upgrade cost we do every day,” Durand said. “Regardless of how someone uses that local grid, everyone connected to it relies on us for reliable electric service.”

Opponents of the demand charge, however, say the approach is financially burdensome to solar households and could inhibit adoption of home solar.

The electric meters available in Massachusetts do not provide individual customers the data they need to understand when their demand is peaking and how high it is rising. Without that information, it is difficult for consumers to manage or even predict what their monthly demand charge will be. This uncertainty, in turn, could make homeowners less likely to install solar panels, opponents say.

“At a bare minimum, we need to give people the tools and information to be able to manage a demand charge,” said Mark LeBel, staff attorney at the Acadia Center.

In addition, those fighting the demand charge argue that there is no need to relate the fee to a customer’s personal peak demand. System-wide peaks, they say, have a far great effect on the cost of running the electric grid.

Opponents are urging legislators to put a stop to the utility’s plan by adding further restrictions to the MMRC rules. A bill passed by the state Senate would require demand charges be based on system-wide peaks and that customers have access to meters or other technology that would allow them to monitor and track their usage in something close to real time.

A conference committee is currently hashing out compromise energy legislation in the hopes of passing something before the end of session on Tuesday.

At the same time, Vote Solar has appealed the ruling that approved the demand charge to the state’s Supreme Judicial Court. The case argues that Eversource did not sufficiently prove the current payment structures are unfair and that an existing law that net metering customers not be subject to additional fees should override that law authorizing MMRCs.

While Eversource maintains the demand charge will make the system more equitable for customers who do not use net metering, opponents think the intended fee does not take into account the real-life consequences for customers.

“There’s a difference between what looks good to the utilities in their spreadsheets and the practical impact on consumers,” Dube said.