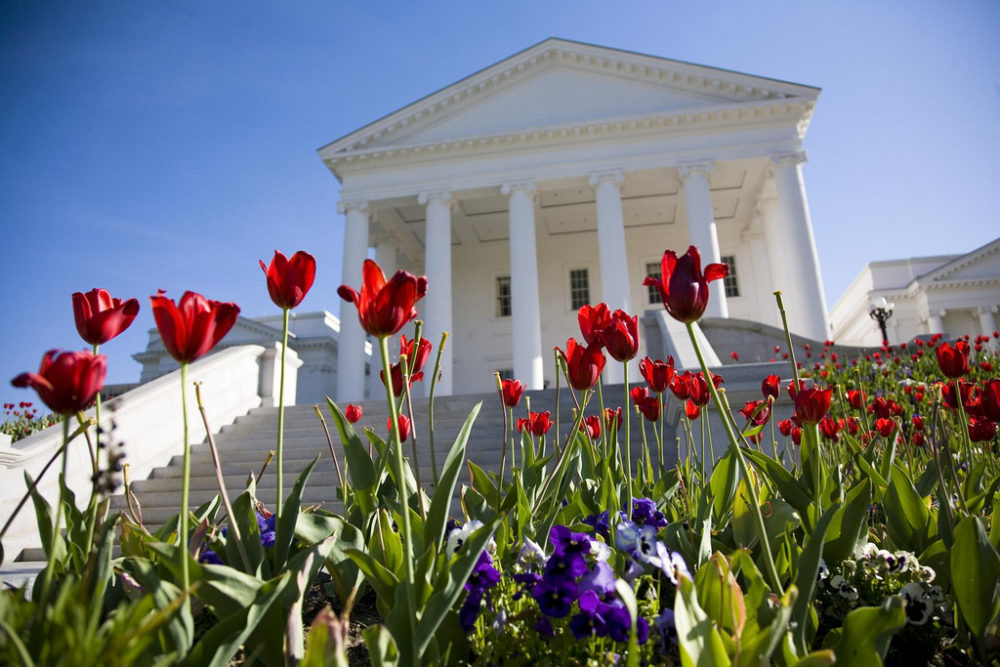 Springtime at the Virginia State Capitol.

On paper, Virginia’s sweeping new energy law should result in significant new investments in the state’s electric grid, as well as energy storage, efficiency, and renewable generation such as wind and solar.

How it actually plays out, though, will be largely determined by a trio of appointed commissioners with extensive regulatory authority.

Now, even as Virginia lawmakers ask the State Corporation Commission to implement the comprehensive energy bill they passed this year, they’re also considering appointing a commissioner with close ties to the oil and gas industry who critics say will hurt the state’ clean energy transition.

Judge James Dimitri retired from the SCC at the end of February, leaving the state legislature to appoint a replacement to finish out the remaining two years of his term. The House of Delegates favors Richmond lawyer David Clarke, who has worked as a lobbyist for a long list of clients that includes the Virginia Oil and Gas Association, individual gas companies, and insurance and banking interests, all of which are regulated by the SCC. According to the Virginia Public Access Project, Clarke’s association with the oil and gas association dates back more than a decade.

The Virginia League of Conservation Voters and other environmental groups have opposed Clarke’s appointment, citing his work for industries that receive SCC oversight as a red flag. In a news release, Michael Town, the league’s executive director, likened Clarke’s potential appointment to “a fox guarding the henhouse.”

“We certainly have concerns about someone that might be taking on such an important position and puppeting the views of the monopoly utilities and the other companies the SCC regulates,” said Kate Addleson, director of the Sierra Club’s Virginia Chapter. “During his time representing big oil and gas as a lobbyist for hire, Clarke has been anything but impartial on these issues.”

Instead of a commissioner with such close ties to fossil fuels, Addleson said, lawmakers should choose someone “for their careful and smart deliberation capabilities, not for any flexibility of conviction or opinion, and that’s the kind of thing we’ve seen from David Clarke in the past. Based on his previous industry history, it’s difficult to feel Clarke will make smart regulatory choices.”

Carl Tobias, a law professor at the University of Richmond, said the SCC works like a judicial panel and, as with judges who are also appointed by the General Assembly, Virginia lawmakers must weigh Clarke’s potential conflicts of interest against his deep knowledge of the state’s utilities and regulatory environment.

Tobias said questions about potential conflicts with should be weighed as carefully as they are for judicial appointments. “Can someone who was an advocate before going on the bench, if you will, shed those loyalties to become a judge as a neutral arbiter of disputes or ratemaking or whatever the SCC does? They [lawmakers] should think about it and talk about it and ask him as a witness what does he intend to do. Does he think there’s a conflict? Will he step down if it’s an issue he’s worked on?”

The flipside of Clarke’s past work, Tobias said, is that he’s developed a lot of expertise in the field.

“He seems to be competent in terms of understanding what the commission does, its procedures, and would bring special expertise in some of those areas from some of his representation and lobbying,” Tobias said.

Environmental and clean energy groups wrote a letter to Virginia Gov. Ralph Northam in mid-March endorsing a number of other candidates for the vacancy, including energy lawyers, current and former cabinet officials, and environmental advocates.

The Sierra Club’s Virginia Chapter favors Cliona Robb, an energy and sustainability lawyer at Richmond’s Christian & Barton law firm, whom Addleson said “is highly qualified and has not worked on behalf of oil and gas interests or those who ultimately this body is responsible for regulating.”

The Virginia General Assembly all but ended its 2018 session last month when it passed a state budget after months of debate. However, it ended without appointing a number of judges, including for the SCC vacancy. House Speaker Kirk Cox said it will probably be mid-August before the legislature reconvenes to take up the appointments.

The legislature had previously split on the SCC appointment, with the House favoring Clarke and the Senate favoring John Watkins, a former state senator from Powhatan County who served a total of 34 years in the General Assembly. In June, however, Watkins withdrew his name from consideration and instead endorsed Clarke. That move prompted the League of Conservation Voters’ press release opposing Clarke.

“Our interest is really in ensuring that the SCC is doing the right thing for the environment by approving renewable energy and energy efficiency projects, which they’ve not historically done,” said Lee Francis, spokesman for the League of Conservation Voters. “Historically they’ve added red tape. We’re trying to get ahead of what has previously been a sort of brick wall on the regulatory side.”

More recently, Paul Abraham has emerged as a potential SCC candidate. Like Clarke, Abraham has worked as a lobbyist, but his list of clients is not as energy-heavy. Abraham has worked for PJM Interconnection, which concerns itself with utilities and electricity transmission, but his other clients are related to healthcare, transportation, water, commercial real estate, libraries, and local interests.

The General Assembly’s passage of the Grid Transformation and Security Act of 2018 on the last day of February heightened expectations for a statewide transition toward clean energy.

The league supported that bill, Francis said, largely because it “aimed at getting renewable energy and energy efficiency projects through the SCC by declaring them in the public interest. Previously the SCC could look at the criteria and say, ‘That offshore wind turbine costs a lot, and this coal-fired plant costs less, so let’s build that instead.”

The commission already has fired rhetorical shots at the new law, however.

In an April decision rejecting Appalachian Power’s request to purchase 225 megawatts of wind capacity from wind farms in Ohio and West Virginia, commissioners included a section that raised two issues concerning the new Virginia energy law: First, whether the commission will be required to approve wind and solar projects regardless of actual need, and second, whether language in the law that appears to mandate that wind and solar projects be located in Virginia violates the U.S. Constitution’s Commerce Clause.

“It doesn’t surprise me they’re kind of thumbing their noses at it now,” Francis said. “The regulators don’t like being regulated. That’s an issue we’ve seen in the past.”

The balance of power between the SCC and General Assembly was part of a legal fight that questioned the legislature’s authority to freeze utility rates with a 2015 law. The SCC ruled 2-1 to uphold the General Assembly’s authority in a 2016 ruling on the case; Dimitri, whose retirement created the vacancy now in question, wrote in his dissent that oversight should remain with the SCC. The SCC’s ruling was upheld by the Virginia Supreme Court last year.

Tobias said he expects the General Assembly will appoint a new commissioner when it reconvenes in mid-August. If the House and Senate can’t agree upon a new commissioner and lawmakers adjourn without appointing someone, Gov. Northam can make an interim appointment, with lawmakers taking up the question again in their 2019 session.