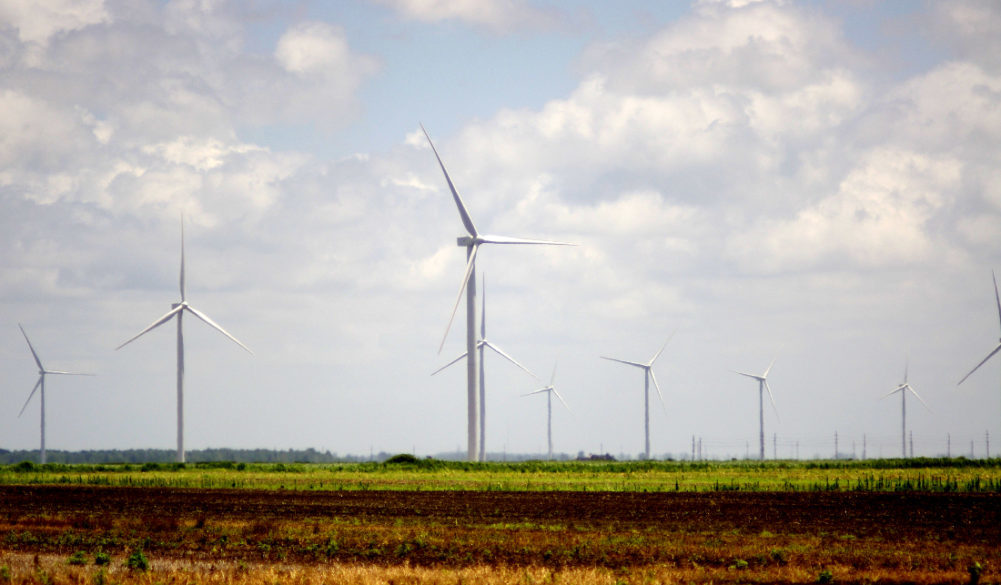 Despite anti-wind bluster from parts of the state, candidates who supported renewables came out on top in Republican primaries earlier this year.

As anti-wind activists, bloggers and politicians rallied against his bid for state senate, Steinburg declined advice from some to downplay his support for clean energy. In the end, he won his May primary handily, with the widest margins in counties where wind-farm foes had stirred the most controversy.

“There were folks on the other side that were hoping that issue would be my Achilles heel. These are primary voters. These are the most conservative of the conservative,” said Steinburg, who is serving his third term in the North Carolina House. “But being for renewable energy — it did not hurt me at all.”

Observers say Steinburg’s victory in this red corner of the state is a sign of growing support for clean energy among voters on the right, despite opposition from key party leaders and conservative groups.

“Republicans don’t need to run from the issue,” said Dee Stewart, one of the state’s top GOP consultants. “If anything, they should embrace their support for clean energy. That’s what the polling numbers say.”

Growing bipartisan agreement over clean energy is in some ways a return to form in North Carolina, which has historically passed major energy and environmental policy with painstaking consensus.

The combination of those policies sparked a wave of large-scale solar farms, catapulting North Carolina to second in the country for solar power. Technological advances made wind energy economically viable on the eastern coastal plain, where the Southeast’s first and still only major wind farm began operating last year.

But even as renewable energy brought jobs and tax revenue to poor, rural counties, a conservative backlash was brewing.

The economy plunged into recession, giving new salience to warnings from the right that clean energy would spike electric rates. Then-President Barack Obama championed wind and solar and a cap on climate pollution, provoking fossil fuel interests who poured money into the cause of Tea Party activists.

“For conservatives, somewhere along the line, solar energy in particular equaled Obama,” said Molly Diggins, director of the North Carolina Sierra Club. “It was less about the substance than it was an organizing principle.”

In 2013, when the GOP took control of the legislature and the governorship, conservative groups sought to topple the state’s green energy mandate. They failed only when key Republicans, including now-Speaker Tim Moore of Cleveland County, voted against repeal, citing jobs and economic investment in their districts.

While the mandate survived, the legislature’s record since then has been mixed. Lawmakers allowed tax credits to expire in 2015, but angered conservative groups with exceptions for some projects through 2016. Last year, the House adopted a sweeping measure to double solar capacity while relaxing PURPA requirements; the Senate wouldn’t agree to it without an 18-month ban on new wind farms. Some wind energy supporters worry lawmakers will attempt to make the ban permanent before the year’s end.

‘A much different landscape politically’

Though it’s been uneven, clean energy advocates on the right celebrate the progress they’ve made since the GOP assumed power.

“Repealing the [clean energy mandate] doesn’t have any support to move in a 75-45 Republican state House,” said Mark Fleming, the head of the Raleigh-based Conservatives for Clean Energy. “That is awesome.”

Rep. John Szoka, a Republican from Fayetteville, estimates at least half of his caucus now supports clean energy, compared to only a handful in his first term in 2013.

“I think we’ve got a much different landscape politically on the right than we did four years ago,” Szoka said.

Evolving attitudes among those in power match what top Republican pollsters have found consistently over the course of four years of polling: even conservative voters support renewable energy and are willing to pay for it.

In this year’s Conservatives for Clean Energy survey, Republican voters said increasing competition in the energy marketplace and investing in clean energy should both be bigger policy priorities than supporting fossil fuels.

Asked how policy makers should solve the problem of toxic coal ash, a plurality of Republicans chose “investing state resources into solar, wind and other renewable energy sources” over the options of doing nothing and paying utilities to clean up the waste.

A majority of voters – including a plurality of ‘very conservative’ ones – said they would be less likely to vote for a politician who supported the temporary ban on new wind projects.

“No wonder Bob Steinburg won his primary, he blew the other guy out!” said pollster Stewart. “This is a winning issue.” 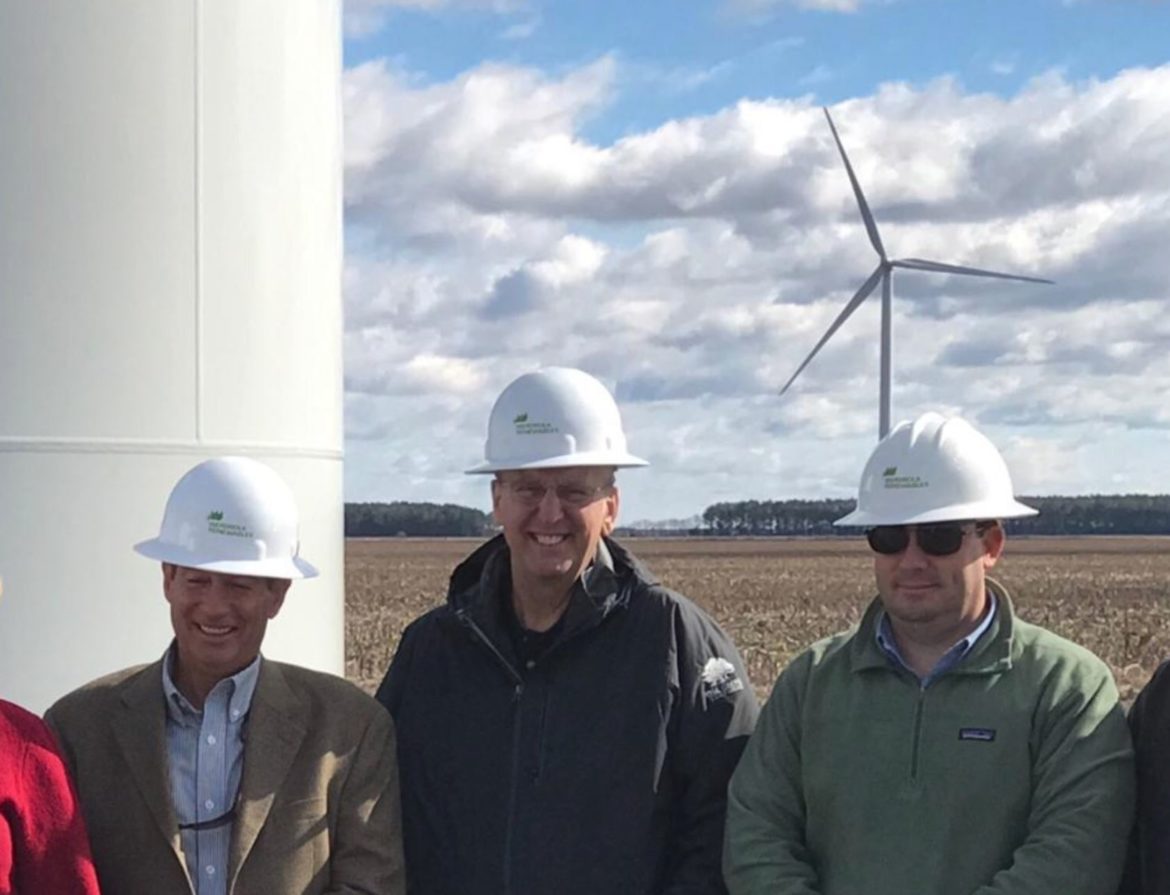 ‘Basic principles that conservatives believe in’

The notion that support for clean energy would motivate voters on the far right is striking — especially in light of the well-heeled conservative groups who’ve spent a decade criticizing wind and solar.

One reason, lawmakers say, is the economic benefit of clean energy. According to the North Carolina Sustainable Energy Association, the industry provides more than 34,000 jobs in the Tar Heel State — more than Duke Energy does in all six of its states.

In Steinburg’s district, the 104-turbine wind farm is the largest taxpayer, last year contributing over half a million dollars to impoverished Pasquotank and Perquimans counties. The electricity produced is sold to Amazon, among a growing number of companies with ambitious goals for wind and solar.

While some conservative groups and bloggers complain that wind and solar receive tax credits, Steinburg points to subsidies the government gives the fossil fuel industry — not to mention farmers, coastal developers, and other sympathetic constituencies in his district.

“Are you against farm subsidies? How about flood insurance?” Steinburg said. “If you’re just against wind and solar renewable subsidies, I think you’re going to have a rough go trying to make that case.”

With the economy in recovery, and the renewable energy mandate costing the average ratepayer less than a dollar per month, alarms about rising electric costs have lost traction. And with Duke Energy proposing rate hikes for other purposes, conservatives believe renewables can increase competition and reduce their energy bills, lawmakers say.

“It gets back to some of the basic principles that conservatives believe in,” said Rep. Nelson Dollar, a Wake County Republican who in 2016 survived a primary challenger. “That is competition and driving our overall costs lower.”

With a natural anti-regulatory bent, conservatives are also at odds with policies like the wind moratorium, which deprive landowners of the chance to lease their land for turbines.

Opposing the moratorium “lines up with private property rights,” acknowledged Clark Twiddy, the Republican who lost to Steinburg in the primary. “I think when you have these families that like the chance to rent out their farms, the idea that someone could tell them they can’t do that is a visceral issue.”

Twiddy also believes his openness to oil and gas exploration in the Atlantic Ocean hurt him with coastal voters. “That to me was a deal breaker on the Outer Banks,” said Twiddy. “If you weren’t dead set against it, they’d go vote against you.”

‘All politics is local’

With the national political conversation under President Donald Trump consumed by other topics, there’s room in local races for renewable energy to become nonpartisan.

“The whole thing about all politics is local,” said Szoka, “I think Steinburg’s primary really showed that.”

But it wasn’t the only Republican primary in the state in which the candidate friendlier to wind and solar power prevailed.

Edward Goodwin bested Candice Hunter in the race for Steinburg’s current House seat — even after the conservative Daily Haymaker questioned his belief that “wind power and other alternative energy sources are part of a balanced approach to energy policy for the state.”

“So,” blogger Brant Clifton wrote, “District 1 Republicans may end up replacing one solar weenie – Steinburg – with ANOTHER ONE?”

Rep. Chris Malone won in northeastern Wake County outside Raleigh, despite the same blog complaining that he voted for a “solar giveaway bill that warmed the heart of every lobbyist in town.”

Rep. Beverly Boswell fell to Bobby Hanig, head of the county commissioners in Currituck and foe of offshore drilling. Hunter Ford was trounced by Rep. Ted Davis in Wilmington. And former Sen. Bob Rucho, who led the charge to overturn the state’s fracking ban, lost his bid to return to the Senate in a contest north of Charlotte.

The lessons from these primaries shouldn’t be overstated, some observers say. With the exception of races in the northeast, the issue of renewable energy barely came up on the campaign trail, and there’s no exit polling to prove exactly what voters were thinking.

Jon Sanders, director of regulatory studies with the John Locke Foundation, which publishes the conservative Carolina Journal, warns against relying on polls that he says gloss over the downsides of wind and solar.

“Essentially what the poll finds,” Sanders said, “is that people say nice things are nice.”

Others welcomed the shift toward renewables among conservatives, but cautioned it wasn’t enough.

“We’re seeing more support from clean energy from Republicans, but they’re not calling for 100 percent clean energy or increasing the [renewable standard],” said the Sierra Club’s Diggins. “It’s a change, and it’s welcome change, but we’re still not where we need to be.”

The test of whether voters agree with Diggins could come this fall. In a year when progressives are battling hard to break the GOP’s supermajority, Republicans like Steinburg will face Democrats with stronger environmental and clean energy platforms.

Pete Gilbert, head of the Pasquotank County Republican party, believes one of Steinburg’s strengths is appealing to voters across the political spectrum.

“He gets a lot of people across the aisle to work with him,” Gilbert said.

But even Steinburg acknowledges he’s probably not the right choice for voters who support clean energy because it mitigates global warming.

“I’m trying to do everything I can to help the environment,” Steinburg said. “But I’m not a climate change guy.”