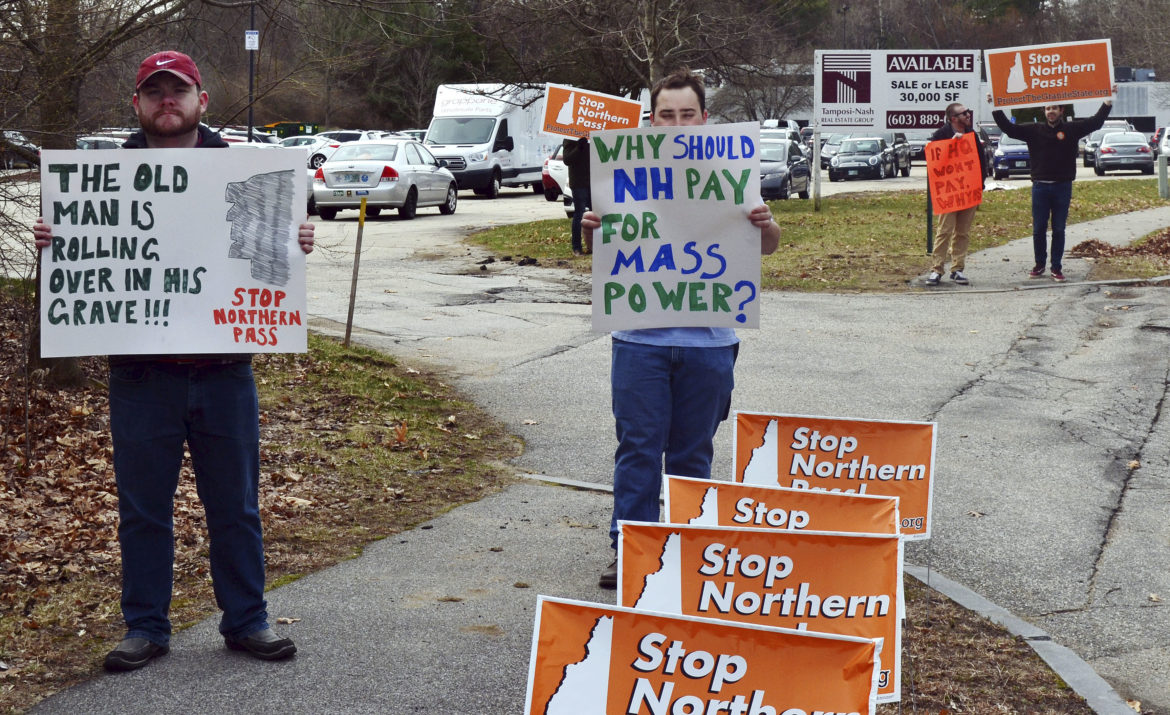 Protesters from the group Protect the Granite State outside a 2017 hearing by the New Hampshire Site Evaluation Committee for the Northern Pass project in Concord, N.H.

In New Hampshire, a new exhibit will chronicle the opposition movement to the energy project

Throughout northern New Hampshire, hand-painted signs flanked the roads in recent years. Decorated with straightforward messages like “No to Northern Pass” or more colorful slogans like “Kiss my ass, Northern Pass,” some hung from pine trees, and others stood erect on the roadside.

In New Hampshire, the Sugar Hill Historical Museum is now collecting items like these signs, as well as T-shirts and bumper stickers, for a new exhibit called the “Northern Pass Opposition Archives.”

Northern Pass is a proposal to run 192 miles of new transmission lines from Canada through New Hampshire, carrying  hydroelectric power to move from Quebec to the New England power grid, a connection proponents say is needed to cut carbon emissions in a region heavily dependent on natural gas. A project of Eversource Energy, New England’s largest energy provider, and Canadian utility Hydro-Quebec, it proved to be controversial from the start.

As early as 2010, opposition sprung up in the form of more organized efforts from nonprofits like the Society for the Protection of New Hampshire Forests, as well as grassroots action from concerned residents, especially those in the state’s North Country region. Now that opposition is being translated into a visual display in Sugar Hill, a small town overlooking the White Mountain National Forest.

Susan Schibanoff, a retired English professor, is leading the effort  behind the exhibit. Based in Easton, she’s been an active opponent of Northern Pass since 2010. Over the years, Schibanoff commuted to Concord, the state’s capital, to attend between 80 to 100 days worth of hearings and meetings about the project. The travel alone was an intensive process — 160 miles round trip.

Schibanoff was inspired to collect opposition materials while she was researching another significant opposition movement in New Hampshire history — the battle to defeat a four-lane interstate highway through Franconia Notch in the White Mountains. Despite her efforts, Schibanoff found little on it.

“Grassroots by nature is ephemeral,” she said. “The history tends to not get recorded.”

She didn’t want the same thing to happen to the opposition movement against the Northern Pass, and so she decided to preserve its history. “There were a lot of us,” she said. “It’s an amazing phenomenon, the way in which this particular group held together over eight years, and grew, and essentially overlooked a lot of differences we may have had, like ages and political stances.”

A researcher by training, Schibanoff reached out to the nearby historical museum in Sugar Hill, which agreed to house the archive. According to her, it was important to archive the Northern Pass opposition for two reasons. First, she says, the sheer size and length of time of the opposition was unprecedented in New Hampshire’s history. Second, the records would let historians and sociologists to understand the nature of such a movement, as well as allow opposition groups elsewhere to learn from their example. “Somebody may write a book about it someday,” she joked. 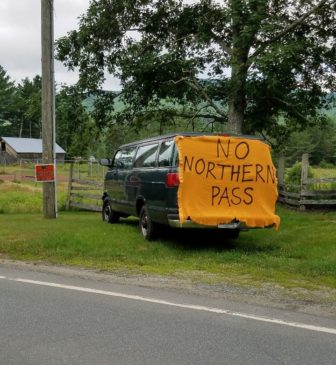 A blanket sign mounted on van at Tamarack Tennis Camp along Route 116 in Easton, the day the SEC made a site visit in 2017. Photo by Susan Schibanoff.

“What we’re looking for is the ephemeral material, what people are likely to throw out,” she says, like lapel buttons, lawn signs, and orange bows that residents put on mailboxes. The collection is in its early stages right now. Schibanoff recently put out a call online and in local New Hampshire press, as well as through word of mouth. Already, people are sending the museum materials. The trunk of her car is full of donated items. One person, for example, kept every news clipping about the Northern Pass from local papers over the eight years.

“If and when people start donating the materials, we can get a fuller picture of what happened,” she said. “It was very scattered.” A grassroots movement isn’t hierarchical by nature, and neither was the one against the Northern Pass. Her project is a way to piece together the movement.

According to Peter Brown, an energy lawyer in New Hampshire, the movement against the Northern Pass had two key players: the Society for the Protection of New Hampshire Forests and the Appalachian Mountain Club. “I think they were critical in the result of the siting committee,” he said. “That’s not to say the people who were mobilized in a variety of ways weren’t helpful, maybe even critical, too.”

The location of the transmission line was a major point of contention, as was the construction of thousands of new towers along the route. Northern Pass was expected to run through the White Mountain National Forest, which would have obstructed some of the visual landscapes in the state park, says Brown. Residents were also worried about the visual impact of having transmission facilities near their homes.

“One key advantage for us was that this wasn’t a decision being made elsewhere like Washington or Boston,” said Will Abbott, vice president for policy and reservation stewardship at the Society for the Protection of New Hampshire Forests. “It was New Hampshire people making New Hampshire decisions affecting New Hampshire’s future.”

While there were a number of public hearings from 2015 to 2017 to provide provide public officials with information about the project, Abbott says Eversource failed to engage major stakeholders in the process. “They just told people what they were going to do and that was it,” he said.

Martin Murray, a spokesman for the Northern Pass project, contests those claims and says there was a lot of support for the project across the state. A 2016 WMUR Granite State Poll showed more New Hampshire residents opposed the project than supported it, though the opposite was true in polls from the previous two years. In 2015, for example, 42 percent of those polled supported the project while 34 percent opposed it.

Unsurprisingly, the project’s strongest opposition came from those in the areas in the immediate vicinity of the project—those in the North Country and the Connecticut Valley.

Is there a future for Northern Pass?

In February, the New Hampshire Site Evaluation Committee voted unanimously to deny Northern Pass a permit, and in May following a motion for a rehearing, the SEC voted again to uphold its earlier decision on the proposal.

According to Murray, the SEC decision doesn’t mean the end for the Northern Pass. “We are absolutely committed to pursuing a path forward for the project,” he said. Eversource plans to file an appeal to the state’s Supreme Court on or before an August 13th deadline, and may modify its proposal to mitigate some of the concerns of residents, including putting at least some of the lines underground.

“We very rarely appeal to the Supreme Court and when we do it’s because we have an extreme level of confidence we will prevail,” Murray said.