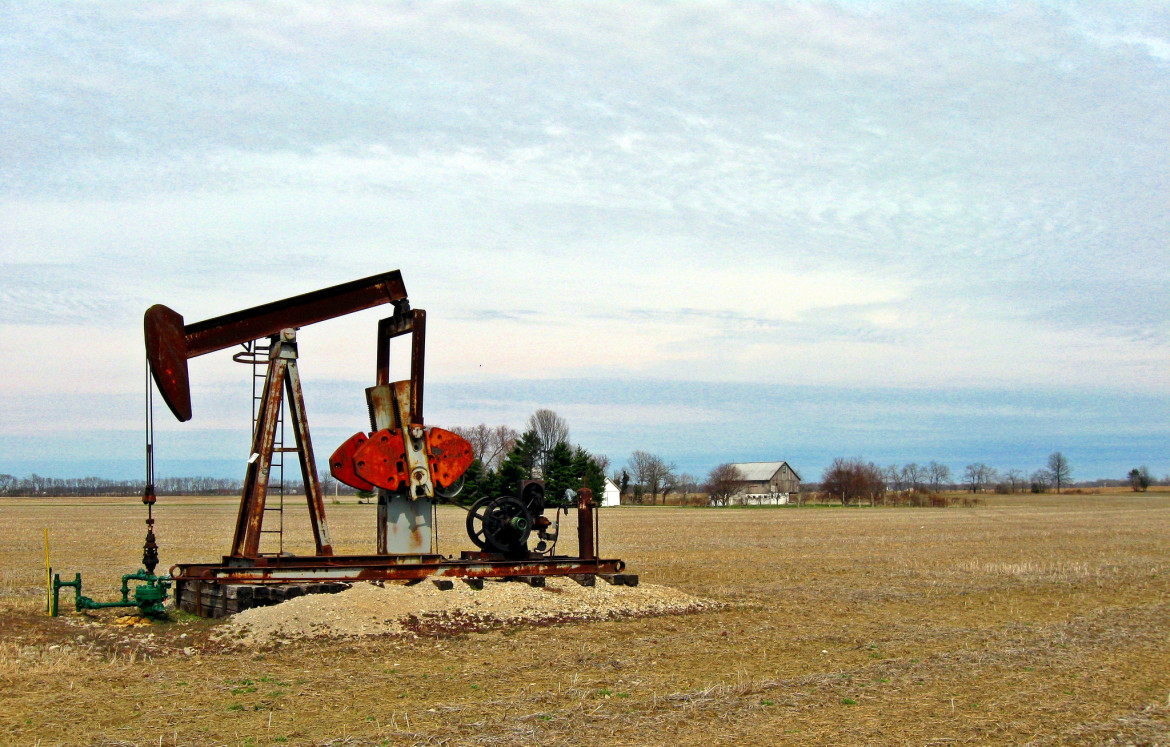 Ohio oil and gas drillers could use existing technology to find and fix most methane leaks at little or no cost to their bottom lines, according to experts on a recent panel at Case Western Reserve University in Cleveland.

Better still: leak detection could create new jobs and revenue, boosting the state’s economy and helping to curb a potent greenhouse gas responsible for about a quarter of manmade global warming experienced today.

“I also like to refer to methane as wasted natural gas,” Williams said, noting that the product could otherwise be sold and used. As a result, “you can reduce methane emissions by 50 percent for no cost and by 70 to 80 percent at a very marginal, fractional cost.”

That jives with results reported by companies in the industry, said Isaac Brown, who heads up the Center for Methane Emissions Solutions, an industry organization for companies that work in the leak detection and repair field. The group commissioned a 2016 survey of oil and gas companies in Colorado after that state’s more stringent methane detection rules came into effect. Eight out of 10 said they were profiting, breaking even or paying out just slightly more as a result of those rules.

“Tackling methane emissions not only provides cleaner air, but adds good jobs,” Brown said. Salaries in the leak detection and repair field range up to $113,000 per year, he said.

New permits have called for periodic monitoring for methane leaks since production of natural gas from fracking took off in 2011, said Michael Hopkins, the Ohio Environmental Protection Agency’s assistant chief for clean air permitting. The agency faced a “tsunami” of applications for new drilling sites, compressor stations, and other facilities. Permit requirements became more stringent after Ohio revised its rules in 2014 to require quarterly monitoring for leaks.

Nonetheless, Brown’s figures showed, oil and gas companies in the state still have roughly 300,000 tons of methane emissions per year. That means the state’s economy misses out on about $40 million, he said.

That figure could actually be much higher. A June 21, 2018 study found that methane emissions from the U.S. oil and gas supply chain are likely 60 percent more than amounts previously estimated by the U.S. Environmental Protection Agency. Researchers at two U.S. government agencies, a dozen universities, EDF and others worked on the report.

So, why does Ohio’s oil and gas industry still have leak?

For one thing, dealing with leaks through permits has limits, Hopkins said. The agency can’t readily require more stringent leak detection methods for existing operations unless either it or U.S. EPA goes through a multi-year rulemaking process.

Likewise, the agency can’t easily require more frequent monitoring for the companies who received permits before the 2014 rules took effect. So, months could go by before a leak is discovered. “Maybe our original frequency of once a year wasn’t sufficient to catch the leak soon enough,” Hopkins said. 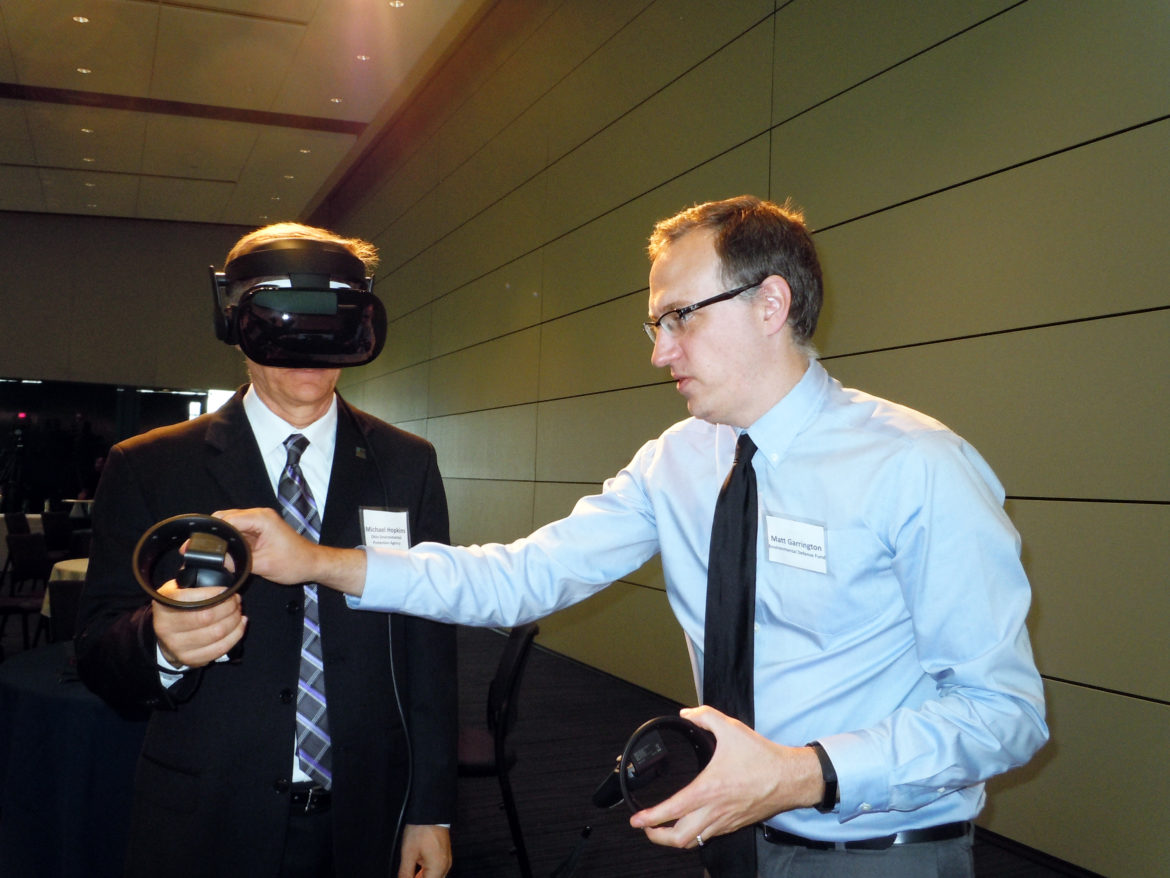 Matt Garrington of the Environmental Defense Fund shows the Ohio EPA’s Michael Hopkins how to navigate through a virtual reality demonstration of how an optical gas imaging camera can find leaks at a well site.

Some of the latest technology could not only be more efficient but safer and easier to use in the field, said Craig O’Neill, head of marketing for FLIR Systems. Among other things, the company sells handheld cameras for optical gas imaging.

One technician with a camera can stand at one place to scan a broad area, he explained. In contrast, someone with a portable vapor analyzer usually has to hold the instrument’s sensing sniffer right in a plume of leaking gas.

The camera works because hydrocarbon molecules absorb energy in part of the infrared range differently from things around them, O’Neill explained. Depending on that background, the gas shows up as either a dark or light plume. A similar concept explains why something black appears darker than non-black things. The black object absorbs more light in the visible spectrum that our eyes can detect.

Virtual reality simulators were on hand at the Case Western event to show how the equipment would work in the field. Fixes for most problems in the simulation were simple actions: Tighten a nut. Close a hatch tightly. Relight a pilot lamp. And so on.

Some companies in Ohio already use optical gas imaging, especially larger operations. However, others still rely on vapor analyzers. In some cases that’s because permit terms don’t automatically require updating of testing methods. In other cases the reason is cost.

Work is underway to bring down the costs for the imaging equipment, O’Neill said. Small and mid-sized companies that otherwise wouldn’t buy the cameras themselves can also contract with independent companies for the monitoring, he noted.

As those efforts continue, environmental advocates would like to see more stringent and up-to-date standards apply across the oil and gas industry.

“If I ran the zoo, I would make sure we had more frequent monitoring,” said program attendee Laura Burns, an advocate with Moms Clean Air Force. “If we’re going to continue to use [natural gas] as an energy source, it has to be the safest it can be.”