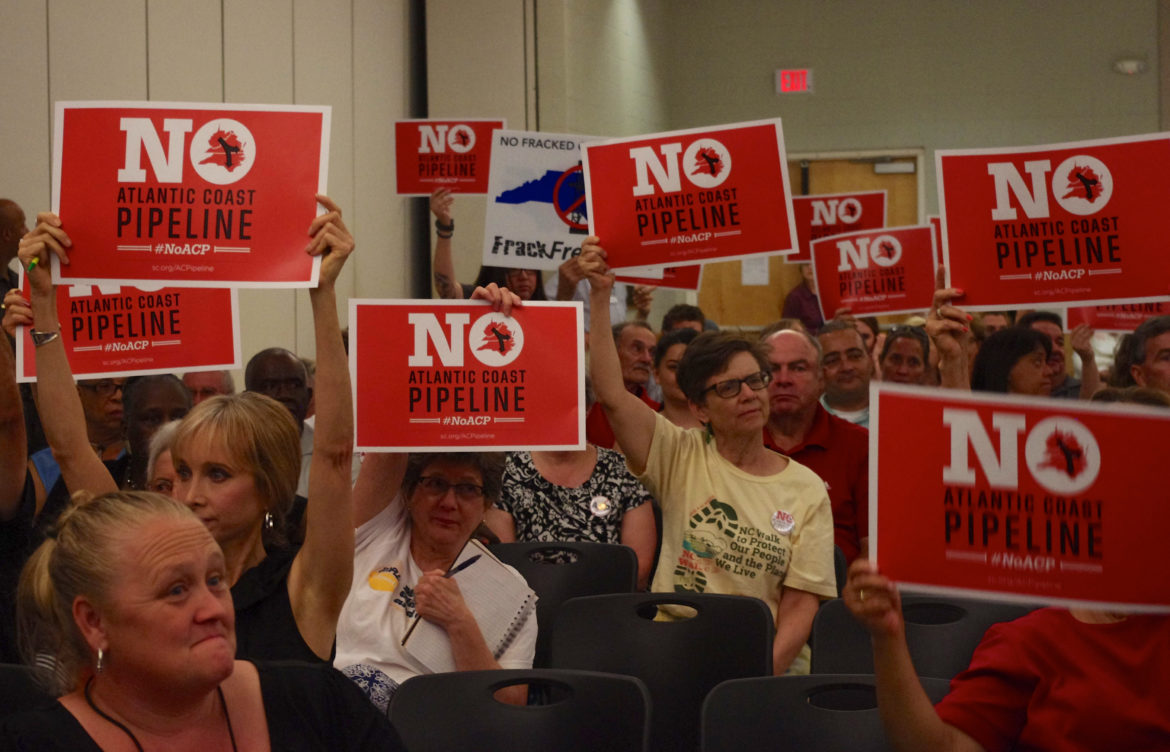 Citizen groups filed another lawsuit against the Atlantic Coast Pipeline Thursday, this time taking direct aim at the federal certificate that undergirds all other permits for the complex interstate gas project.

Pipeline foes have long contended the project isn’t needed to meet demand in Virginia and North Carolina, and that it will cause unmitigated harm to the region’s forests, endangered animals, and waterways.

They’ve filed numerous suits focused on the pipeline’s environmental impacts, winning temporary victories last week that have stalled construction. Thursday’s court challenge with the 4th U.S. Circuit Court of Appeals is the first to focus on whether the gas project is necessary, and success in this case would more likely be permanent.

“This is really the central permit for the entire project,” said Greg Buppert, a senior attorney with the Southern Environmental Law Center, which with Appalachian Mountain Advocates filed the suit on behalf of 13 conservation groups. “This the permit where the need for ratepayers to finance the project is squarely at issue.”

The 600-mile pipeline from West Virginia to North Carolina is a massive undertaking by any measure. It will bore under or through the Blue Ridge Parkway, two national forests, and hundreds of rivers and streams, including habitat for rare and endangered animals. Its 100-foot wide construction berth will require felling large swaths of forests, crossing the land of thousands of individual property owners. In many cases, the census tracts in the pipeline’s path contain more American Indians and people of color than the surrounding county as a whole.

The agency with ultimate authority over the immense project is the Federal Energy Regulatory Commission, or FERC. The five-member panel determines whether the pipeline is necessary — and if it is, how to balance it against property rights, civil rights, and the need to protect the environment.

In three decades, FERC has rarely concluded that pipelines’ costs outweigh their benefits, rejecting only two applications out of hundreds received. It has often minimized pipelines’ impacts by granting approvals with caveats such as requirements that developers secure valid permits from environmental regulators.

FERC’s certificate for the Atlantic Coast Pipeline is no exception. Issued last October, it came with 73 conditions, including authorizations from a web of state and federal agencies.

Citizen groups are challenging four of these authorizations in court, and they’ve have already notched key wins. On August 6, the 4th Circuit invalidated two permits; four days later, FERC ordered all construction on the pipeline stopped.

“The only lawful thing for FERC to do is to shut down all construction while these permits aren’t in place,” said Buppert. “That’s what FERC’s certificate says.”

But legal experts disagree about the ultimate impact suits like these can have. Attorneys for pipeline opponents believe an invalid permit from any one agency could sink the entire endeavor. Others say a more likely outcome is that pipeline developers will quickly work to correct permit problems or, if necessary, reroute parts of the project.

“If success means they shut down a pipeline,” said Ellen Gilmer, a legal reporter with E&E News, on a recent appearance on West Virginia Public Radio, “I don’t think the rulings that we have seen so far from federal courts suggest…that this is likely to happen extremely soon.”

‘Questions about the need for this pipeline’

Thursday’s challenge is different because it strikes at the heart of FERC’s approval: whether the need for the project overrides its environmental harm.

Advocates have long argued it does not, honing especially on available supplies of fossil gas in the region. A 2016 study by environmental consulting firm Synapse showed that existing pipelines could meet the region’s power needs through 2030. An analysis from the Institute for Energy Economics and Financial Analysis found that pipeline capacity in the Virginias and North Carolina was vastly underutilized.

Pipeline foes also object to what they call “self-dealing” by the project’s chief investors, Dominion Resources and Duke Energy. The companies say 80 percent of the gas sold would fuel their own power plants; much of the remainder would serve existing customers of Piedmont Natural Gas, which is owned by Duke.

“It’s really a scheme to create revenue for the parent company shareholders,” said Gudrun Thompson, an attorney for Southern Environmental Law Center who participated in Thursday’s filing, “while having ratepayers pick up the tab for this pipeline that’s not even needed.”

Thompson’s group has also seized on recent testimony Transcontinental Gas Pipeline Co. submitted to South Carolina regulators in a separate proceeding. Additional infrastructure in that state would be “duplicative,” Transco said in that letter. Their own pipeline service, which supplies North Carolina with all of its fossil gas, could meet gas needs of the southeastern United States “for many years.”

This week’s challenge comes after FERC declined on Friday to reconsider its certificate and amid open disagreement among commissioners about the need for the Atlantic Coast Pipeline and the Mountain Valley Pipeline, a similar, 300-mile project now slated to end at the Virginia-North Carolina border.

“Both projects appear to be receiving gas from the same location, and both deliver gas that can reach some common destination markets,” Commissioner Cheryl LaFleur said in her October dissent of both pipelines. “I am not persuaded that both of these projects as proposed are in the public interest.”

Environmental attorneys challenging the certificate didn’t elaborate on their their legal strategy before the 4th Circuit. But they don’t deny their appreciation for LaFleur’s position.

“It’s clear that even within FERC there are questions about the need for this pipeline and the unnecessary harm it will cause to the surrounding communities, the environment, and the customers in Virginia and North Carolina that will bear the financial burden,” Buppert said.

The pipeline’s developers forcefully reject claims that their project is expendable.

“Public utilities in our region are depending on this infrastructure to meet the real and urgent needs of the millions of customers they serve,” Tammie McGee, a spokeswoman for Duke, said in a prepared statement.

McGee has in her corner of a raft of local economic development officials eager for the jobs and new industry the pipeline is purported to bring.

That’s in part why groups fighting the pipeline are deploying an array of organizing as well as legal strategies, from lawsuits like the one from this week, to civil disobedience, to a volunteer program to monitor construction.

“Is there a magic bullet out there?” said Marvin Winstead, a Nash County landowner who’s suing pipeline developers for improper use of eminent domain and frequently helps stage anti-pipeline protests. “The answer is no.”