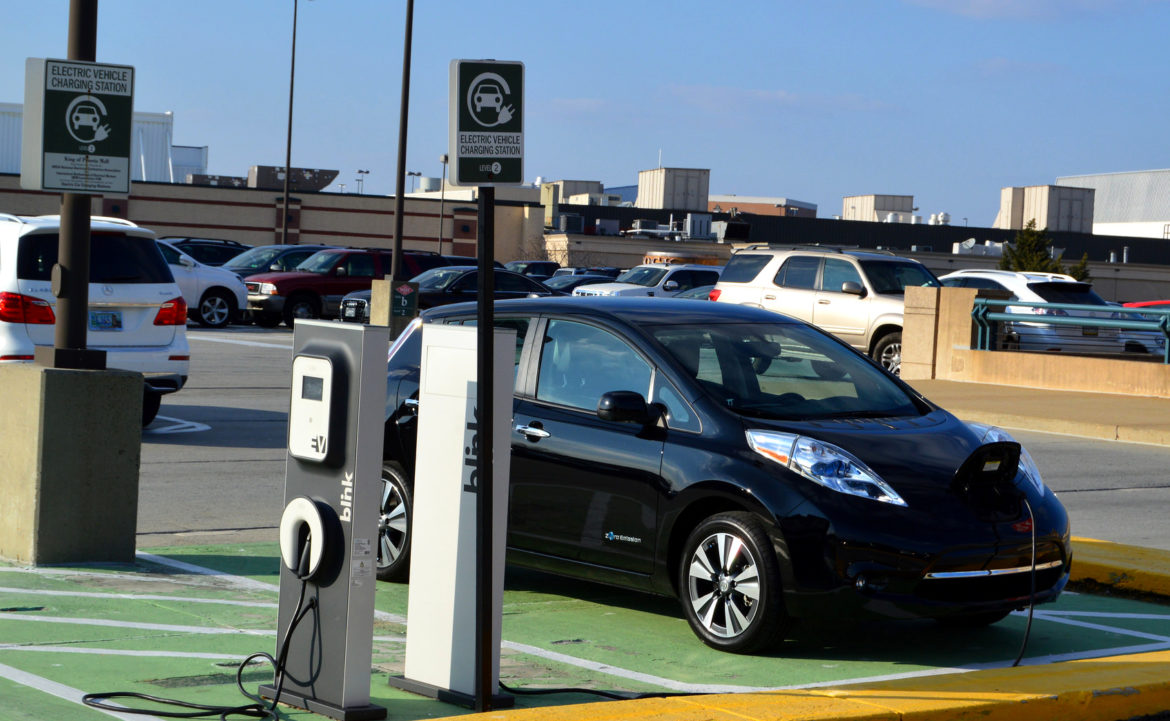 An electric vehicle charging station at the King of Prussia Mall outside Philadelphia.

A new online tool aims to help states coordinate the buildout of fast-charging electric vehicle stations on highways throughout the Northeast and Mid-Atlantic.

The EV Corridor Analysis Tool was published by the Georgetown Climate Center earlier this year. It covers more than 9,000 miles of roadways in the region and was recently updated in July to include Virginia.

“It’s making this more of a mainstream vehicle option,” he said. “States are recognizing it, and in the Northeast region so much travel is between state lines.”

There are multiple ways to charge an electric vehicle, depending on the kind of vehicle, the distance, and how long the driver can wait. Options range from a typical wall outlet, to a Level 2 charger (akin to a 220 volt outlet for an electric stove) which could charge a vehicle overnight or during the workday. Level 3, direct current (DC) fast-chargers are analogous to gas stations, allowing drivers to “refill” in 20 to 40 minutes. They are much more expensive to install but make long highway trips more feasible.

The analysis tool is part of a broader effort, known as The Transportation and Climate Initiative. It’s a collaboration among 11 Northeast states and the District of Columbia, which began working together in 2010 reduce carbon emissions and other air pollutants from their transportation sectors. The initiative is facilitated by the Georgetown Climate Center.

Goetz and others worked closely with states to target corridors where there are gaps in the charging network.

The tool displays fast-charging stations as both an interactive map and and a downloadable Excel file. Goetz said the intended audience is state agencies looking to plan charging stations in a regional way.

“It looks at fast-charging stations within five miles of highway exits. It plots out where it is right now, and then allows you to rank which ones would be the highest priority.”

He said the new tool could also be used by electric utilities, local governments or metropolitan planning organizations.

“We’re certainly excited to hear early reports states have been using it, and are thinking about their charging infrastructure needs,” he said.  “We hope it will be useful to them.”

The availability of charging stations can vary widely within the Northeast according to the Georgetown Climate Center. For example, Vermont leads the nation with nearly 9 fast-charging stations per 100,000 people. By comparison, Pennsylvania has roughly one such port, for the same number of people.

However environmental advocates are pleased to see a growing interest in electric vehicles and view closing the gaps in charging infrastructure as an important step.

He noted the New York Power Authority recently announced $250 million in funding through 2025 toward helping to accelerate the adoption of electric vehicles throughout the state.

But Garcia said right now, most of the fast-charging stations are clustered around the New York City area. It’s a similar story in Pennsylvania, he said, with most of its DC fast-charging near Philadelphia and Pittsburgh.

“That might be stunting EV growth in other areas of the states. We are really seeing a dearth of charging infrastructure where people live, work, and play” he said. “As that DC fast-charging infrastructure gets deployed and there is better geographic coverage, I think we’ll see people feeling more confident they can take their annual holiday trip or visit family across state lines.”

A bill in Pennsylvania, which the NRDC and other environmental groups are backing, aims to expand electric vehicle adoption by promoting charging infrastructure and planning efforts in the coming years.

Rep. Marguerite Quinn, a Republican from the Philadelphia suburbs, is the prime sponsor. She said she believes most people are just a couple cars away from having a very serious discussion about the next purchase being an electric vehicle.

“I think the majority won’t just be about being environmentally correct. It’s just where the major manufacturers are going,” said Quinn. “When I next go to buy a car, I’m going to be looking at how long a tether I have with regard to an EV. I think it’s incumbent on those of us in policymaking to get the discussion going and give people some options.”

Quinn said although the bill made it out of committee earlier this year, it has not advanced. She said she still “needs to do a lot of education” with fellow lawmakers, who have an image of an electric vehicle as a luxury and not something for the masses.