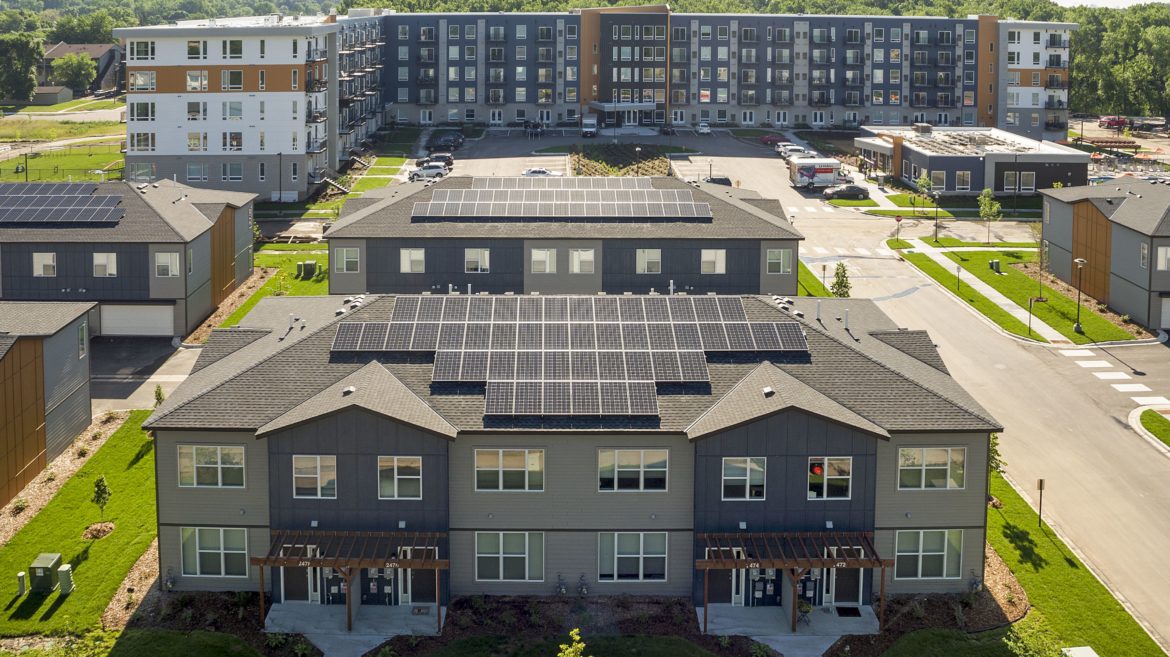 A Twin Cities developer who recently completed one of Minnesota’s largest residential solar energy projects hopes that it serves as a model for future multi-family developments.

The 452-kilowatt (kW) array at the Liberty Apartments and Townhomes in Golden Valley consists of more than 1,400 panels atop 55 townhouses, as well as on a clubhouse and a five-story apartment building.

“I knew we could do this as an amenity,” said developer Todd Schachtman, who is a native of Golden Valley, an inner suburb of Minneapolis. “When you look at solar and multifamily real estate there are so many synergies.”

Schachtman recently finished a new apartment building in St. Paul with a 40 kW installation. Solar can be a great amenity to attract tenants and keep energy costs in check, he said, and incorporating solar during construction rather than years later saves money and helps with optimizing design for solar.

While Schachtman is an enthusiast, only a small number of apartment owners have opted to add solar to projects in one of the Midwest’s fastest growing urban areas, where more than 9,000 apartments were permitted for construction last year alone.

At Home Apartments in St. Paul is another long-standing supporter of solar on apartments, incorporating solar panels in new and existing properties. It has installed 526 kW on apartment complexes, the largest being 148 kW in the suburb of Eagan.

Minnesota Solar Connection builds community solar gardens for apartment owners. Its first project, a 4 megawatt array, will be a partnership with developer George Sherman of Sherman Associates that will offset 80 percent of the electricity at nearly 2,500 units in Minneapolis and surrounding Hennepin County.

Several challenges have hampered solar energy’s growth among multi-family developers, starting with the way energy is delivered in  apartment complexes. David Shaffer, executive director of Minnesota Solar Energy Industries Association, notes that generally building owners pay the cost of electricity for common areas while tenants are billed for how much energy they consume in their apartments.

“There’s not a strong incentive if their use is not that high,” Shaffer said. Most apartment units rarely go higher than 40 kW because of regulatory issues, he said, so something as big as Liberty “would have to have a lot of energy consumption.”

Martin Morud, CEO of TruNorth Solar, who managed the installation of panels on the Liberty project, says breaking into clean energy can be a challenge for building developers.

“You are asking someone to do something out of their expertise,” Morud said. “There isn’t that much to it. Todd had the courage to say ‘yes, we’re doing it.’ You need a champion like that.”

Then there are regulatory issues that can emerge in cities which have no experience or history with permitting a solar project. City officials in Golden Valley initially approved the apartment building, but  rejected the solar project, fearing nearby homeowners might object.

When Schachtman added townhouses to the mix, the city, under its ordinances, could not stop the solar project from going forward. “I beat them to their own punch,” he said. “There was no way they were going to stop me.”

Golden Valley physical development director Marc Nevinski said initial issues were quickly overcome. Part of the reason for the minor dustup was that the city previously had never permitted a solar project on a multifamily housing development, he said.

The city is updating its comprehensive plan, which includes “accommodating more renewables,” he said. With the city seeing several new developments, either being completed or started, there has been a lull in new permits. The next round will determine whether Liberty has touched off a solar boom in Golden Valley or remains a one-off project.

Apartment deals tend to be financially complex, add in solar and they become even more tangled. In planning for Liberty, Schachtman decided to pay cash for much of the $1 million project and use a Property Assessed Clean Energy (PACE) loan from the St. Paul Port Authority for the rest (the authority’s MinnPACE offers PACE financing to dozens of cities and counties around the state).

Schachtman estimates that with tax credits his return on investment should take five to six years, perhaps longer, he said.

For apartment owners who plan to operate their buildings for many years solar can make sense. But many developers will own apartment buildings for just a few years before selling them, leaving the question of how solar will fit into a market valuation, say market observers.

The Liberty project received a Sustainable Leadership award this year from the Environmental Initiative, a local nonprofit. “Making solar energy an integral part of community development in the Twin Cities Metro Area is leading-edge and not commonly available for rental apartment living,” the award noted.

Schachtman considered joining a community solar garden to offset some electricity use at Liberty but balked at the lack of curb appeal. “I didn’t want to do something that’s 50 miles away,” he said.

However, despite Schachtman’s enthusiasm, having solar onsite hasn’t yet wooed that many tenants. While television monitors and phone apps describe the Liberty solar project in detail – including how much power the sun is delivering in different time increments – it’s a little unclear how many residents know much about it, or care. “Some care, some don’t, some have no idea,” he said.

Kaye Christensen, marketing director Steven Scott Management, Inc., which manages Liberty, said “at this point the solar panels are seen as a more of an ancillary benefit,” she said. “People visiting might say, ‘it’s nice you guys are doing that.’”

Tenants leasing the 55 townhouses are, for now, more enthusiastic about solar energy because it pays for all of their electricity consumption, she said. They have a separate meter for their units and can see how the solar energy is being generated by the systems on their roofs. Energy generated from the other panels is used for common areas and to power pumps for the swimming pool in summer.

Schachtman wants to do more to promote solar energy to current and prospective tenants.

“We’re going to show them what we’re doing with solar,” he said, including details that reveal Liberty’s system will displace 5,518 metric tons of greenhouse gas emissions over two and a half decades. Schachtman says a tenant at Liberty recently told him the solar installation led him to lease a unit. He’s hoping for more such tenants because solar energy “is where environmental stewardship and the economics of business meet…and it’s a damn good amenity.”