Photo By
Richard Sitler /The Southern, via Associated Press 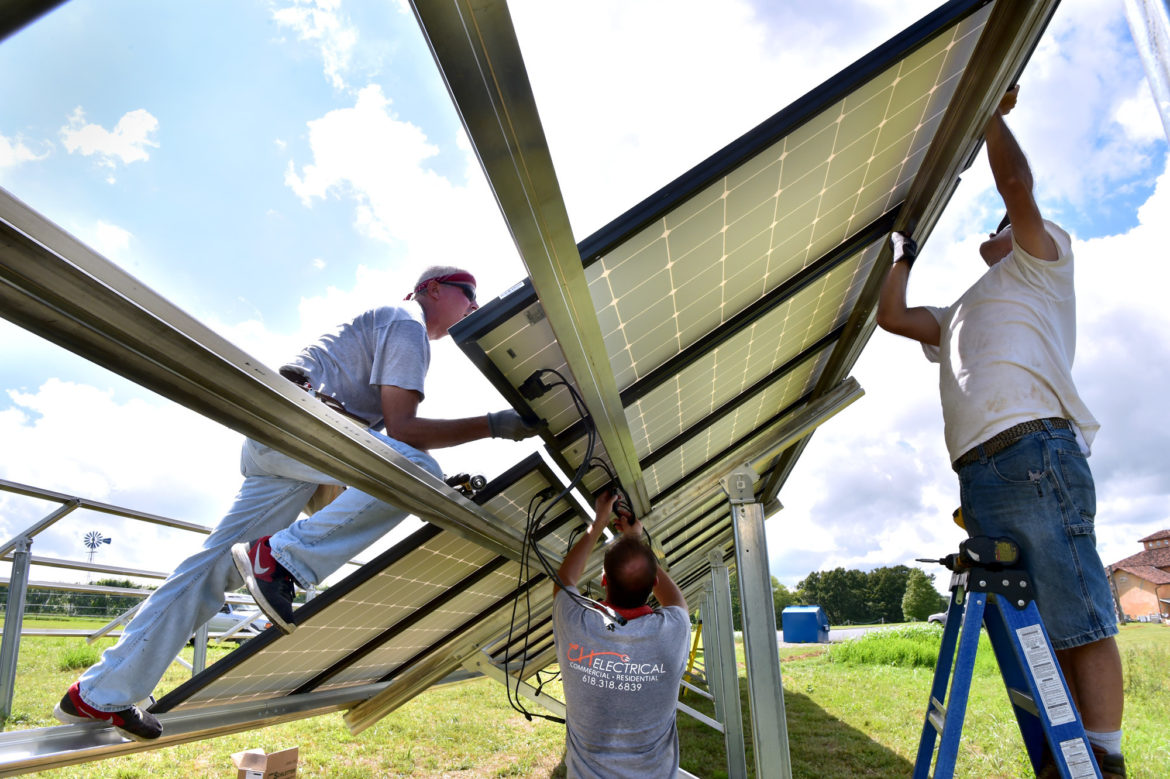 The family company Wellspring Components started four generations ago to fabricate metal for horse-drawn buggies for Amish families in Indiana. Today, its offshoot Wellspring Solar is among a growing number of national and Midwestern companies launching new solar operations in Illinois, thanks to incentives under the state’s Future Energy Jobs Act.

Wellspring first got into solar and batteries a quarter century ago as a way to charge batteries for lights on the buggies, vice president/general manager Arlin Yoder explained. Soon they were building solar arrays on homes and barns more generally. Amish and Mennonite families in the Midwest have long been interested in solar since it allows them to use electricity in a sustainable way without being connected to the grid.

Today Wellspring Solar serves off-grid and grid-tied residential customers – Amish and otherwise, and also builds larger commercial installations up to 1 megawatt. Once the incentives available under FEJA became clear, they decided to open an office and hire employees in Illinois, a few hours’ drive from their Shipshewana, Indiana headquarters.

Wellspring is among more than a dozen companies that have started or significantly expanded solar operations in Illinois because of FEJA, which mandates the state develop about 3,000 MW of solar by 2030, up from about 74 MW when the bill passed in late 2016. With the Solar Renewable Energy Credits (SRECs) that form the basis of the incentives becoming available next year, and provisions to facilitate large-scale community solar development, the boom is only expected to continue.

“With the great incentives starting in Illinois, that’s a market where you want to be,” said Yoder.

Back on home turf

Barry Shear started a solar company in Iowa after he retired from a successful career in health care administration and realized he needed something else to keep him busy. His brother-in-law was a master electrician, so they gave solar a try and now have almost 60 employees and more than 14 megawatts of solar installed.

Eagle Point Solar tangled with the local utility and Iowa regulators over their attempt to ban Eagle Point’s third-party ownership of solar installations, in a case that went to the state Supreme Court where Eagle Point was ultimately victorious.

Eagle Point has worked in Illinois for about eight years, but will expand significantly soon. “Illinois will likely be our largest state this year — that is really attributable to FEJA,” said Shear, who was born in the Chicago suburb of Evanston and has lived in the Chicago area for much of his life.

“Now we’re really focused on Illinois because the economics are just overwhelmingly good. FEJA is creating an opportunity for solar development in Illinois that otherwise wouldn’t be there. If FEJA didn’t happen, then Illinois essentially would be just like Iowa — no incentives, no tax subsidies, avoided utility costs.”

Jon Carson was living in Lake County in northern Illinois working as director of solar ambassadors for Solar City when FEJA passed. He saw it as an opportunity to found a new company – Trajectory Energy Partners, which plans to develop large community solar projects in cooperation with communities, organizations and businesses.

“It was an incredible opportunity to work in our backyard,” said Carson, a civil engineer who was chief of staff at the White House Office of Environmental Quality under President Obama. He said Trajectory Energy Partners is working on a community solar project in an old quarry near Rockford, Illinois, among other things.

“I’m incredibly excited to do this in the Midwest,” he said.

Before FEJA, Rethink Electric had five employees. Now they have 25, and expect to hire six more by year-end. “Before we could keep one crew – incentives would come and go, so you couldn’t invest much,” he said. “Since last year we’re hiring just to handle the influx, and the [SREC] program hasn’t even started yet.”

This month Vivint, which designs and builds solar in 22 states, announced its first Midwestern launch in Illinois; and its intention to create 100 jobs in the process. Also this month, Houston-based Sunnova Energy announced it will offer solar leases and loans in Illinois. Moxie Solar, Solect Energy, Cypress Creek Renewables, Borrego Solar and Sunrun are among other companies that have opened Illinois offices, with their hiring plans totaling well over a hundred employees.

Kevin Borgia worked extensively on FEJA as then-public policy manager with the advocacy group Wind on the Wires. Through the process he got to know the national solar developer Cypress Creek Renewables, where he now serves as Midwest policy director. Cypress Creek is looking to build large community solar (up to 2 MW) and utility-scale projects in Illinois.

Cypress Creek has hired employees in Illinois since launching here because of FEJA; and Borgia noted the job creation goes well beyond direct hires.

“We’ve spent millions on things like project permitting, land planners, civil engineers to craft building plans, drain tile experts,” he said. “Drain tile is a big issue in a lot of rural communities. The way [solar] development works inherently, [such experts] may not work directly for one solar developer but they’re getting a ton of work. And that’s all pre-construction. Once construction starts, you’ll have all kinds of electricians, people building roads, fences that go around the installation. That’s work we’re creating.”

As a co-legislative director for the Environmental Law & Policy Center, Sarah Wochos was among the solar developers and advocates who worked with legislators, utilities, power companies and other stakeholders over the course of several years to craft the legislation that became FEJA. During that process she worked with representatives of Borrego Solar, a company operating in California and the Northeast. Wochos is now director of policy and business development for Borrego, which plans to build community and residential solar in Illinois.

“We would not have been able to enter Illinois without FEJA,” she said. “First, there was no bill credit mechanism for community solar participants prior to FEJA, sometimes called remote or virtual net metering, so community solar wasn’t available as an option. Second, while Illinois had a solar REC market prior to FEJA, it was quite small, so it didn’t make sense for companies to invest in opening an office and hiring staff in Illinois at any scale. FEJA provides that scale.”

Wochos noted that Borrego Solar has 40 to 50 projects under development in Illinois now, and they hope to get into utility-scale projects in the future. But she noted that FEJA doesn’t guarantee a windfall for everyone.

A big question mark is the scope and accessibility of the adjustable block grant program which includes the distribution of SRECs. Wochos notes that community solar and behind-the-meter systems need to have an interconnection agreement with the utility – which can take months; other required permits; and control of their site – a lease or ownership; before securing the grants.

“Even with those three items in hand, which I will say is a considerable investment of time and money on our part, there is no guarantee that our projects will be built,” Wochos said. “That is because there is more interest and more projects under development right now than the adjustable block program has room for. So while we have projects that could qualify today, we’ll need to wait for the program to open to know whether each individual project will be built.”

Carson agreed that securing the grants is “a long process.” “But I’m very happy with how it’s playing out,” he said.

Nicolosi said he expects to see “quite a few years of growth” in Illinois solar, but wonders what will happen when a net metering cap of 5 percent of aggregate capacity is hit, and policies are renegotiated for paying customers for the energy they send back to the grid.

Another dark spot in FEJA’s implementation, as some solar developers see it, is a pending challenge by ComEd seeking to prevent municipal utilities and rural cooperatives from participating in the SREC market. Under the Illinois Commerce Commission’s order regarding the program they are allowed to participate, but ComEd’s filing creates uncertainty about the future.

Shear and Yoder are among the solar developers who say a ban on municipal utility and rural electric co-op participation would limit projects that they would otherwise have done in such territories. Eagle Point has been working with a northern Illinois rural electric cooperative that approached them, Shear said, but it’s unclear if those customers will be able to benefit from FEJA incentives.

“It’s still a hard sell if you’re a customer of a rural electric cooperative,” said Shear.

Most developers say that uncertainty about some aspects of FEJA and the future solar market in Illinois pales beside the factors that are making solar increasingly attractive nationwide. Once FEJA has jump-started the Illinois market, they think that infrastructure and growing awareness of solar, along with the dropping price of solar hardware, will mean continuing demand.

Shear said the rural co-op he is working with has “made the decision, FEJA or no FEJA, solar is happening.”

As ambitious as FEJA’s goals are, Wochos thinks the desire to develop and own solar in Illinois outstrips its mandate and available incentives.

“What we didn’t anticipate in writing FEJA was the level of interest from the solar industry as well as from consumers. So when all is said and done with FEJA, there will be a lot of unmet demand for solar,” she said. “I think we’ll see solar get even bigger than FEJA envisioned in the near future.”

Yoder is confident that solar development will continue to mushroom in Illinois even after incentives wane.

“It’s like a chain reaction,” he said. “Even if the incentives aren’t as good, there will be people calling who — even if payback wouldn’t be as lucrative – see that it’s the thing to do now.”