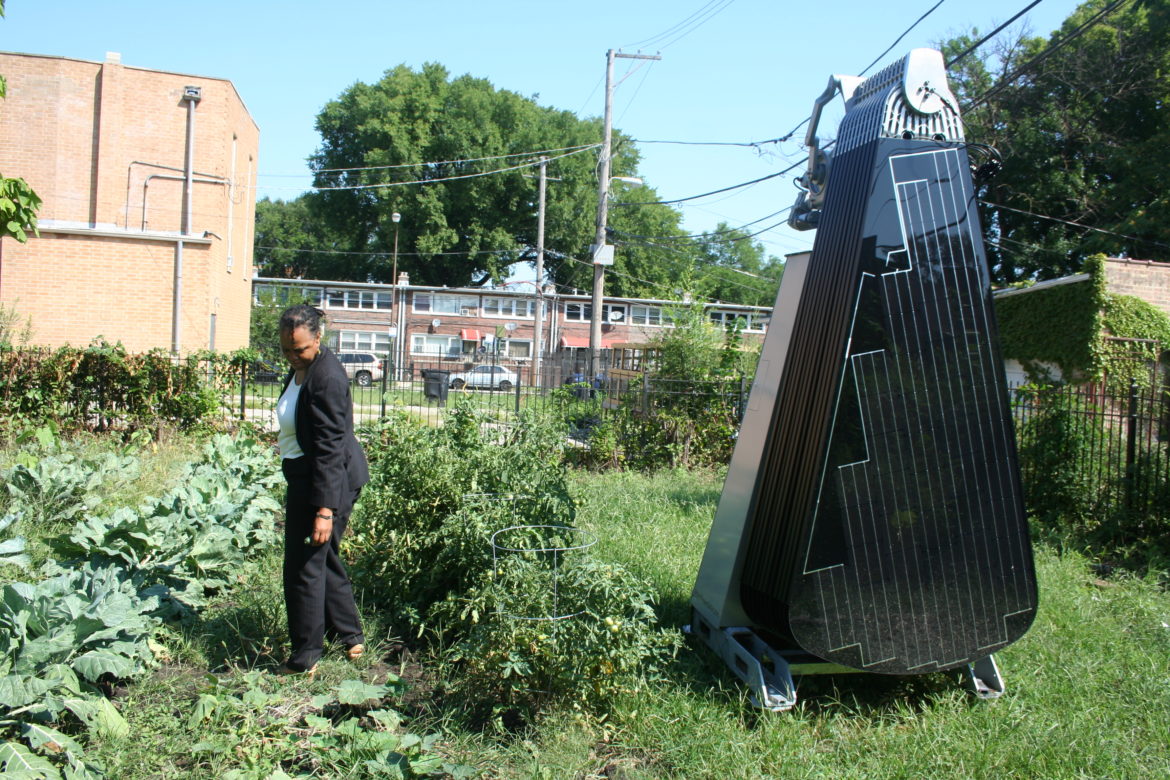 Patricia Abrams, executive director of a low-income housing program on Chicago's South Side, scans a vegetable garden next to a new SmartFlower solar array that will track light throughout the day.

The project will be sited in a vegetable garden at an affordable housing facility on Chicago’s South Side.

One of the first community solar systems in Illinois won’t be a run-of-the-mill array of PV panels.

The Renaissance Collaborative (TRC), an affordable housing complex on Chicago’s South Side, is the site of a dense new solar array that will fan out in the shape of a flower to maximize generation.

Known as a “smartflower,” the system is designed to open in the morning and generate power as it mechanically tracks the sun throughout the day. The compact design makes it ideal for a dense city neighborhood, in this case, in a vegetable garden behind TRC’s building.

Patricia Abrams, executive director of TRC, says that sustainability is a core responsibility for the organization, which provides affordable housing and other programs. She said she hopes the array will be a draw for other affordable housing developers in Chicago.

“If you’re going to deal with and provide services for the very low-income people, that means the government is picking up the tab,” Abrams said. “How do you — in the long haul — make that sustainable and affordable? Energy efficiency is one of those things I think is a must”

The project is a collaboration with Elevate Energy and Groundswell—both players in the energy efficiency nonprofit space. It is funded in part by Mohawk Group, a carpet and flooring business, as part of a corporate sustainability initiative. The project was announced with a glitzy press conference and ribbon cutting in June.

Elevate Energy’s CEO Anne Evens said in a statement that it’s a goal of the organization and its partners to bring energy cost savings and clean energy jobs to underserved communities. “Together, we can mitigate the climate crisis and improve the economic health of our communities,” she said.

It’s not the first clean energy pilot involving TRC, which has been hosting an electric vehicle pilot with ComEd with the goal of providing seniors with a cheap and clean mode of transportation for the so-called “last mile” — the short distance from home to the subway — while examining the impact of electric cars on the power grid.

Working at the nexus of cutting edge clean energy technology, seniors, and affordable housing can be challenging, Abrams said. For example, seniors told her $3 one-way electric vehicle rides were too expensive when added to other transportation costs. “We serve very low-income people, usually what they can’t afford is not very much,” she said. “That doesn’t mean that the price is high — but it is higher than what they can afford to pay.”

That’s why a community solar project is a good fit. “We get the benefit of Mowhawk trying to reduce their carbon footprint and the benefit of lowering our own electric costs, which helps us to stay true to our mission,” she said. “The less we have to pay on expenses, the more money we have and can divert to other areas. So that’s really the basis of us doing ongoing energy work.”

The community solar system is one of the first to be established in Illinois since the passage of the Future Energy Jobs Act in 2016, a massive legislative package with a carveout for 400 MW worth of community solar projects by 2030. There’s strong interest in community solar since the legislation passed, which spurred regulators to start a value-of-distributed-generation study much earlier than expected.

For now, the solar flower is not generating power. Abrams says TRC received a temporary permit to operate the smart flower for the press conference in June, but she is still waiting on the full installation permit to be finalized. “We have to go through that long process,” she said.