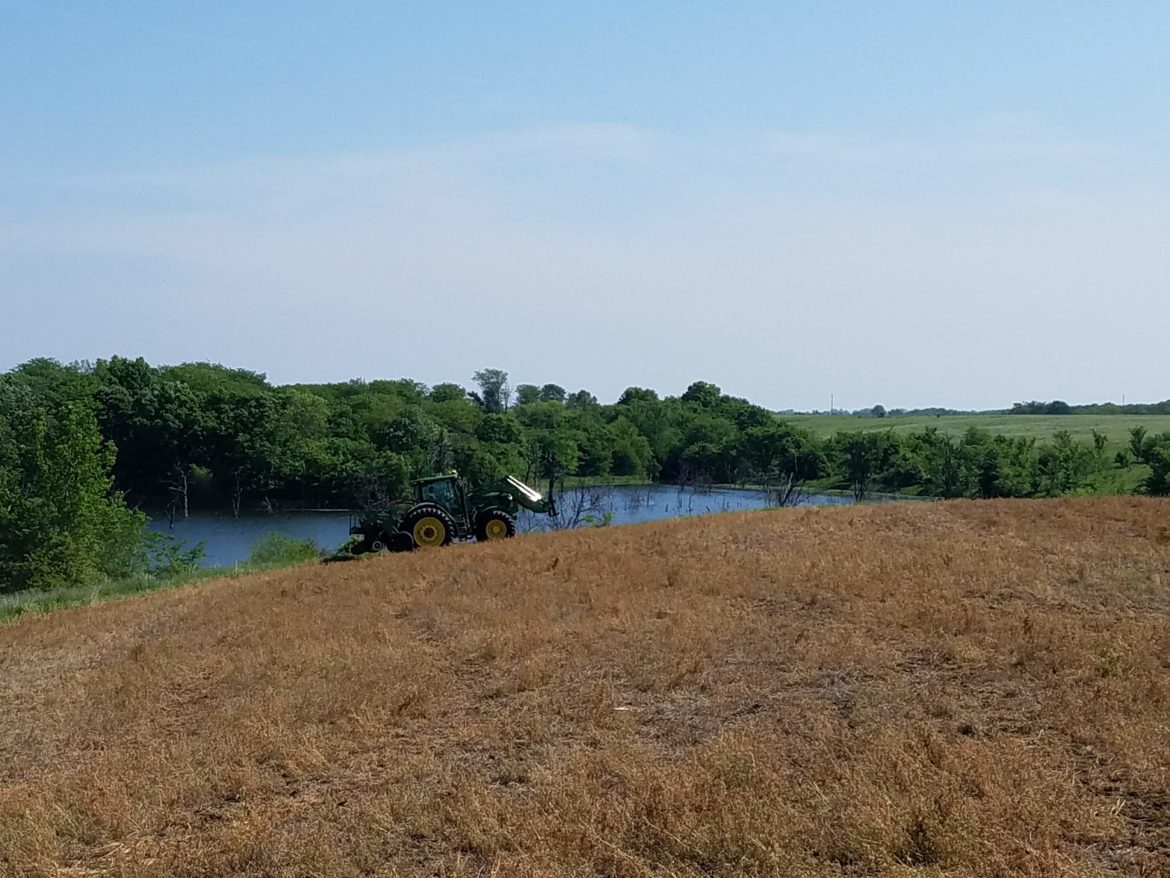 Roeslein Alternative Energy has started converting the first of 1,000 acres of marginal farmland in northern Missouri into prairie grasses to be harvested for biogas production.

A St. Louis entrepreneur has partnered with an agriculture giant on an experiment that could produce carbon negative renewable biogas.

A St. Louis alternative energy company has started the second phase of an ambitious biogas project in northern Missouri that aims to turn prairie plants from marginal farmland into renewable natural gas.

Roeslein Alternative Energy, in a partnership with Smithfield Foods and a group of Midwest universities, has begun converting the first of a thousand acres of lower quality farmland to prairie grasses.

If the company can find a solution that is both technically and financially viable, it could provide broad environmental benefits as well as new income for farmers. But getting there will require building from scratch a whole new system for planting, harvesting, transporting and converting the feedstock.

Anaerobic digestion is fairly widespread in Europe, where there are about 10,000 digesters now operating, compared to about 2,100 anaerobic digesters in the U.S., according to the American Biogas Council. The digesters use microorganisms to break down biodegradable material methane, which can then be cleaned into a biogas that is nearly identical to fossil fuel-based natural gas.

Now that the hog farms are pumping renewable natural gas into a pipeline, Roeslein aims to add a different type of fuel – prairie plants – to anaerobic digesters.

There is plenty of Midwestern farmland that produces only a paltry corn or soybean crop, according to Lisa Schulte Moore, a professor in the department of natural resource ecology and management at Iowa State University. And while those acres could produce a robust crop of prairie plants, she said, there’s no way to market the material.

“One of the beautiful things about what they want to do in northern Missouri is they want to create… a market for those perennial grasses. That’s why I am really excited about what Roeslein is doing. We have the land base, but there have been so many barriers in terms of developing the energy market.”

For example, she continued, there are no anaerobic digesters to convert the biomass into methane, and no system to harvest, transport and store the material before processing, and a lack of farmers willing to convert land to a prairie crop “because they don’t perceive they’ll ever be able to sell the material.”

Emily Heaton, associate professor of agronomy at Iowa State, said she’s confident growing prairie grasses can be profitable on low-performing cropland. She is currently trying to calculate the income potential.

The benefits wouldn’t be limited to extra income. Concerns about algal blooms in Midwestern lakes and the poisoning of the Gulf of Mexico have lead to discussions in Iowa and other Midwestern states about devising a system to compensate landowners for managing their property in a way that decreases polluted runoff, she said. So landowners could trade in crop payments for poorly performing land for revenues for energy production and improvements in water quality.

Heaton said research has demonstrated that planting between 5 percent and 15 percent of agricultural land in prairie plants improves water quality by 90 to 95 percent. And those same prairie plants have proven to be potent for carbon sequestration, according to Clarence Lehman, a biology professor at the University of Minnesota who also has been involved in Roeslein’s initiative.

He has researched the carbon-sequestering powers of prairie plants and said their extensive root networks can stash substantial amounts of carbon dioxide into their roots as well as surrounding soil. And burning the prairie top growth or digesting it anaerobically, as Roeslein wants to do, makes the plants even more potently carbon negative overall, he said.

Roeslein and Smithfield aren’t ready quite yet to produce renewable natural gas, though. Just this year they began converting the first of the 1,000 Smithfield acres to a combination of six prairie grasses and 14 species of flowering plants. The prairie biomass likely won’t be ready for harvest for another couple years, according to Roeslein spokesman Sheldon Ripson.

But already, Roeslein is looking farther afield. He sees the 1,000 acres as just the beginning and hopes eventually to convince landowners to begin growing prairie plants on as many as 200,000 acres of highly-erodible land throughout the Grand River watershed, and as many as 2 million acres in a larger swath of the Midwest. It all starts, he said, with convincing landowners “to change their land practices, rather than grow corn and soybeans where they should not.”

Moore sees it as entirely feasible.

“I don’t think it will happen overnight. But if we’re talking decades, for that 2 million goal, I think it is feasible. For the 200,000 acres in the Grand River watershed, I think if we were to see alignment within state, federal and industry partners with farmland owners, it would be possible within a decade or less.”

Roeslein has been cultivating support and gathering expertise from a wide range of university researchers, land-management professionals and representatives of environmental organizations. In May a few dozen of them met to discuss Roeslein’s vision. Lehman said “the potential is large” for producing power – and reducing atmospheric carbon dioxide – from prairie plants. He calculated what might result from converting Minnesota’s degraded and abandoned farmland – about 4 percent of the state’s surface area – to prairie and extracting the energy.

His conclusion: “the equivalent of multiple nuclear power plants.”

“If you burn one ton of coal, you add three tons of CO2 to the air, more or less. But when you burn a ton of biofuel grown on degraded land, you remove one ton of carbon dioxide from the air.”

Although Roeslein’s project is at a very preliminary stage, Iowa State’s Heaton said she has great expectations.

“This is a great project,” she said. “The Roeslein project is one of the things makes me feel better about the direction of the world.”