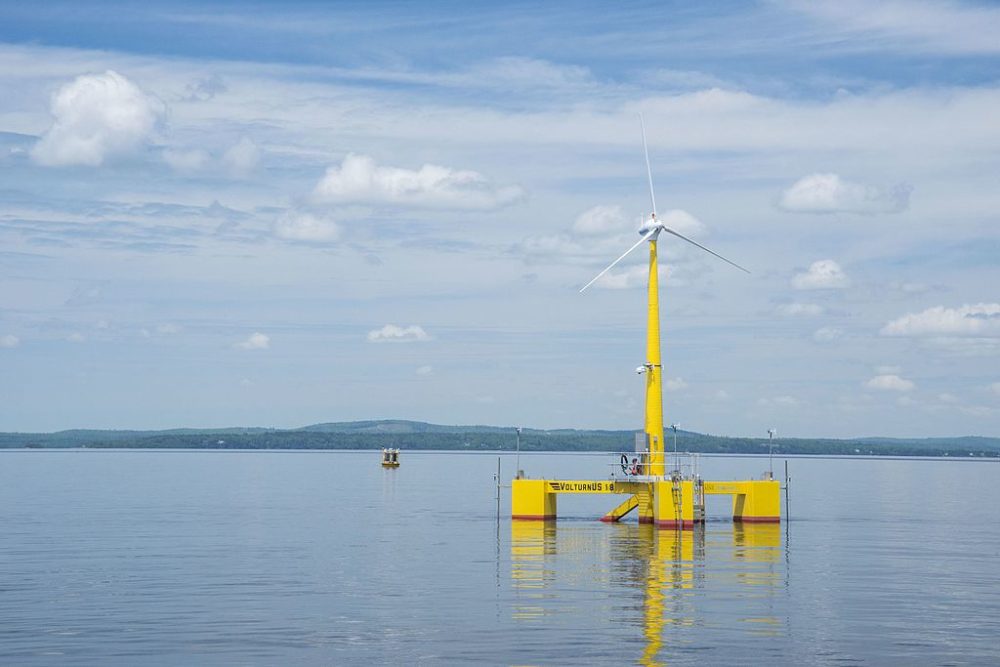 The backers of a two-turbine test project say they were blindsided by a recent decision to reopen terms of four-year-old contract.

A move by Maine officials to rewrite terms of an offshore wind deal will delay a long-awaited demonstration project and further hurt the state’s credibility with clean energy developers, according to project advocates.

The University of Maine-led Maine Aqua Ventus (MAV) demonstration project, which would install two 6-megawatt offshore wind turbines two-and-a-half miles offshore from Monhegan Island will be delayed at least a year as it responds to the PUC. Late 2021 is now the targeted opening.

“One of the disappointing aspects of this is that eight years ago we had eight to 10 companies wanting to test their technologies. Then it was down to three or four,” and now just one, said Jeremy Payne, executive director of the Maine Renewable Energy Association.

A near decade-long effort to test offshore wind in the state began with the Ocean Energy Act, which streamlined permitting for renewable energy projects off the state’s coast. The bill was passed unanimously by the Legislature and signed by former Gov. John Baldacci in 2009. The next year, voters approved $11 million in bonding to support an offshore demonstration.

In 2010, Norwegian energy company Statoil responded to a competitive bid to develop a $120 million demonstration floating wind farm off the Maine coast and thought it had a negotiated power purchase agreement approved by the PUC. Later, though, Gov. Paul LePage in 2013 threatened to veto a comprehensive energy bill if the PUC did not reopen the bidding process.

That reopening of the bidding process created an opening for MAV to submit its own bid, which the PUC eventually awarded the next year, but meanwhile Statoil dropped the project and later turned its attention to a $250 million test project in Scotland. That project, Hywind Scotland, became the world’s first commercial floating wind farm and began generating electricity last year.

“Whenever there’s a new renewable energy company looking to do business in Maine, the very first question I get asked is about Statoil,” Payne added. “So far I’ve been able to say it’s a one-off. But if it happens again, it’s not a one-off — it becomes a pattern.”

The state Public Utilities Commission in 2014 approved a term sheet that would have been the basis of a 20-year power purchase agreement. Aqua Ventus’ two 6-megawatt turbines would sell up to 43,000 megawatt hours per year of electricity to Central Maine Power Co. at 23 cents per kilowatt hour.

With PUC staff recommending contract approval, Habib Dagher, executive director of the University of Maine’s Advanced Structures and Composites Center and the Maine Aqua Ventus project leader, said project proponents thought a January PUC meeting was a mere formality. They were instead blindsided by a commission vote to solicit more comments on the proposed contract with the utility. The comment period ended in February.

“We all know that a demonstration project would be above market prices,” Dagher said. “But as the projects get bigger and the technology develops at scale, it will ultimately be a benefit to the ratepayers.”

A representative of Gov. LePage reiterated his opposition to the proposed contract in comments filed in February.

“The Governor objects to the rates as proposed in the term sheet, because they are significantly above the market and will be borne by CMP’s ratepayers. Further, the length of the contract to prove the technology is considerably long for a demonstration project,” wrote Steven G. McGrath, director of the governor’s Energy Office.

The project could add between $172 million and $187 million to Central Maine Power customer bills. For an average residential customer, that’s about 73 cents a month in the first year of the project.

The PUC voted to reopen the term sheet in June and filed a completed order on August 6.

“The Commission understands the importance of this project to MAV and its stakeholders,” PUC Chairman Mark Vannoy said in June. “On the other hand, it is incumbent on the Commission to ensure that the proposal continues to meet the legal requirements established by the Maine Legislature in 2010 and remains in the public interest of Maine citizens and businesses.”

Those questions were thoroughly researched, assessed, debated and decided throughout regulatory review and should not be done over, said Benjamin Brown, project coordinator of the Maine Ocean & Wind Energy Initiative (MOWII). The group represents component and other manufacturers in the ocean and wind energy supply chains.

“(The PUC and MAV) came to an understanding and they should keep to those terms.  That’s what Maine Aqua Ventus has been developing their proposal around, structuring their financing and their project costs around, to pay their subcontractors,” Brown said. “They would have to do much of that  over again and that’s just not appropriate.”

The PUC said there have been significant changes in domestic and international energy markets. And wind turbines have grown larger than the 6 megawatt machines MAV would deploy, prompting it to ask, “whether the technological features of the pilot project are likely to provide the same benefit as originally proposed, given the technological advancements in the offshore wind industry in recent years.”

Dagher said he is confident the project sponsors can answer the PUC’s questions. About 10 different reports MAV completed in 2014 need to be updated in a process that will run into early next year.

“We feel comfortable that we can answer all their questions and provide the updated information, so they can vote on it again,” he said. Dagher would not speculate on the project sponsors’ response if contract terms were altered to impose a lower power price. The project is also sponsored by Maine-based construction firm Cianbro Corporation and French energy and defense firm Naval Group.

The project won a $40 million award from the U.S. Department of Energy in 2016. Dagher said that award is not at risk, but he conceded the additional proceeding will add a year to the project’s development time frame, with completion now hoped for by late 2021.

PUC actions have taken a toll on developing a thriving business climate for clean energy companies, including offshore wind, land-based wind and solar energy, Brown added. “The people we assist, they’re trying to make plans, they’re trying to make investments, to acquire capital and equipment …. but the instability around energy policy in the state of Maine has negatively impacted the business community and has negatively impacted the economy,” he said.

While Maine has struggled with launching its offshore wind industry, states throughout the Northeast have leapfrogged over it.

This spring in Massachusetts, regulators selected a utility and development partnership to build 800-megawatt wind farm 15 miles off the coast of Martha’s Vineyard by 2021. The project is contingent upon the successful negotiation of a power purchase agreement with the state’s electric distribution companies and the issuance of state and federal permits.

And New York is poised to solicit 800 MW of development this year and next off the coast of Long Island, with a target of 2,400 megawatts by 2030.

All those projects rely on existing technologies of fixed platforms that are limited to ocean depths of 150 feet or less. MAV would deploy a technology more akin to deep-sea oil rigs that can be placed further offshore, unable to be seen from land. Floating turbines would also take advantage of more advantageous wind energy potential further away from shore.

Dagher said in the Gulf of Maine that means 30 percent more energy produced 20 miles from shore compared to turbines sited just off the coast. Floating turbines would also benefit Maine, which has a steeper drop-off along its coastline than the shallower depths off the southern New England states.

According to an analysis by the National Renewable Energy Laboratory, a 500-megawatt project will bring costs down to 7.7 cents per kilowatt-hour. The American Jobs Project issued a report in June that said the project developed because of the MAV demonstration can help produce more than 2,100 jobs per year in Maine through 2030.

In 2013 a eighth scale prototype was deployed at Castine in eastern Maine, making it the first grid-connected floating offshore wind turbine in the U.S. Dagher said that prototype has validated MAV’s models for energy production and structure stability.