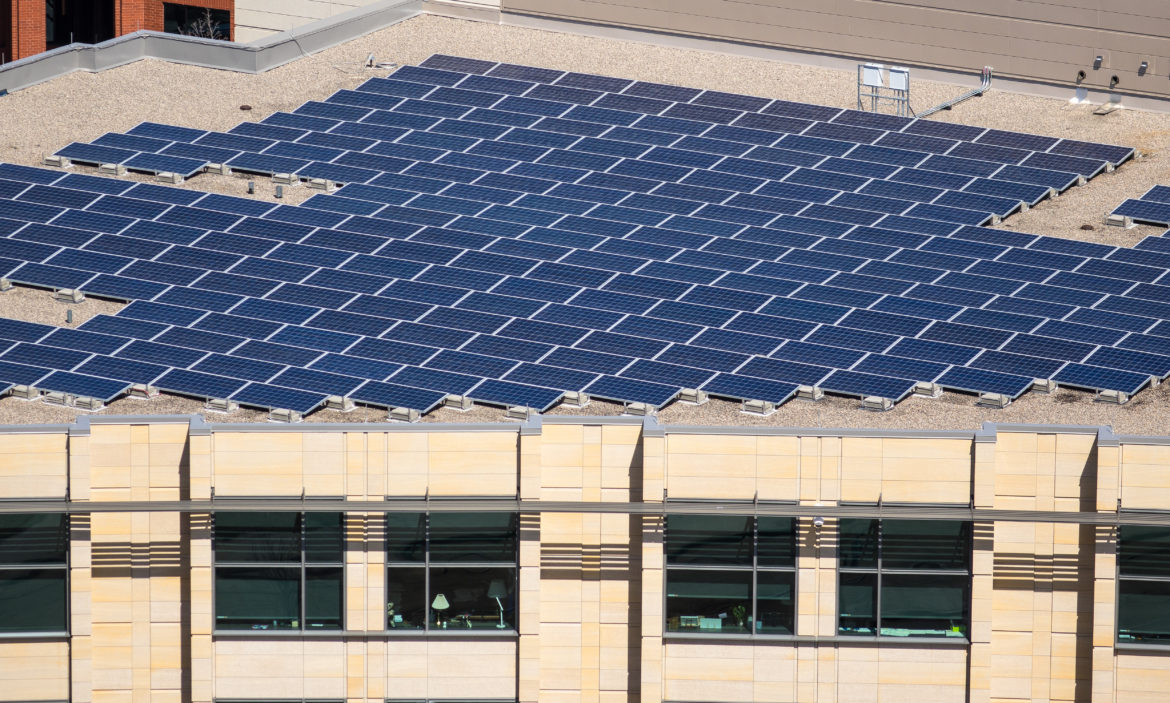 The state of Minnesota recently installed solar panels on the roof of a legislative office building.

Cities, school districts, and government agencies are using a shared contract to streamline the process of procuring solar power.

The state of Minnesota and nearly a dozen other government entities will use a collaborative buying approach to build 4 megawatts of on-site solar.

Called “Solar Possible,” the initiative used a master contract and a joint request for proposals to select vendors and gather pricing data. The Minnesota Department of Administration’s Office of Enterprise Sustainability and two partner organizations developed the program.

Participating school districts, government agencies and city governments are getting better prices than they would have on their own, said Office of Enterprise Sustainability director Larry Herke.

“We’re seeing savings of 10 to 15 percent on projects by using the collaborative effort of working together,” he said.

Purchasing solar collaborating is a small but growing trend. The World Resources Institute has created a collaborative purchasing guide for governments and businesses that highlights a example of an initiative now several years old in Silicon Valley.

Solar United Neighbors has offices around the country, including Minnesota, to serve residential customers with collective procurement. A group of colleges on the East Coast announced a collaborative agreement earlier this year to buy solar from a facility in Maine operated by NextEra Energy Resources.

In Minnesota, government agencies in Solar Possible have chosen 47 sites, both on rooftops and on land. The process reduced a solar vendor applicant pool of 11 to three companies: IPS Solar, iDeal Energies LLC and Mouli Engineering, Inc.

Many communities and school districts receive calls from solar companies offering projects of various sizes on different buildings. “They might have two, three, four, five or even six proposals and they’re having a challenging time figuring out what to do,” Lindstrom said. “While local governments do a lot of things well making these types of judgements is not up their alley.”

Having CERTS, the state and the Great Plains Institute, another partner, involved “takes a lot out of the guesswork” out of the process for communities not accustomed to clean energy proposals, he said.

Trevor Drake, project manager for the Great Plains Institute, worked on a community solar garden specifically built for government subscribers by the Metropolitan Council, a regional planning agency. In both projects cost savings was a major benefit, but the time saved by having another entity run the process “was an even bigger benefit,” he said. “They’re saving a lot of staff time in this process.”

One of the communities fitting that description is Faribault, city of 24,000 about an hour south of the Twin Cities. While interested in placing solar on municipally owned properties city officials feel ill equipped to manage solar procurement.

“A city our size doesn’t have the expertise and or the time to determine whether putting solar PV will save us money, and what the advantages and disadvantages are,” said city planner David Wanberg.

He and city officials have spoken to solar companies but its “difficult to compare apples to apples what they are offering,” he said. “This program gives us some confidence we’re getting some good information before we decided whether to go forward on solar.”

The city has selected nine sites that could be used for solar, Wanberg said. Vendors in Solar Possible are visiting in a few weeks to study which sites are feasible, costs and payback. The city council will want to see that a project makes economic sense.

At the same time, the city sees “value” in the city government being able to model clean energy and build a more resilient Faribault, Wanberg said. The council would want a highly visible city property, such as a fire station next to city hall.

“I think there may be reasons beyond economic but economic will be really important for this council,” he said.  Several of the city’s major employers, Wanberg added, are adding new space and have discussed whether solar could work.

Communities will have options for paying vendors – cash or a host of financing options, Herke said. Vendors agreed to offer a 25-year warranty on panels and a 10-year guarantee on workmanship on equipment, he said.

The first project will be the largest, a 433-kilowatt installation in a park behind the Minnesota State Capitol and on five office buildings. The project will add to an existing 133 kW of solar installed on the Senate Building.

The Minnesota Department of Transportation will likely follow with three sites selected for solar. Several suburban communities involved in Solar Possible will make their decision whether to invest in solar over the next several months. “It might take longer for them to make a decision,” he said.

The master contract and RFP will be reviewed annually, said Herke, and new vendors may be added as the markets evolved. The initial collaboration focused only on Xcel Energy’s territory in the state, he noted, though Solar Possible will broaden into Greater Minnesota.

What was designed to assist state agencies with buying solar now is being spread to communities and districts throughout the state, he said.

State agencies and other government units can use the master contract without being part of Solar Possible, he added. He’s heard from more than a few agencies who may use it to negotiate and hire vendors on their own.

Projects in the pipeline now should be completed by next spring and summer. The first round should generate more interest in Solar Possible, said Lindstrom, because the appetite for solar on government buildings and land is only growing.

“All over the state local governments and schools are interested in solar,” he said. “It just happens to be the financials work out well in Xcel territory for now. Believe me, everywhere I go people are asking ‘how can we do this in our city, for our schools, in our county.’”